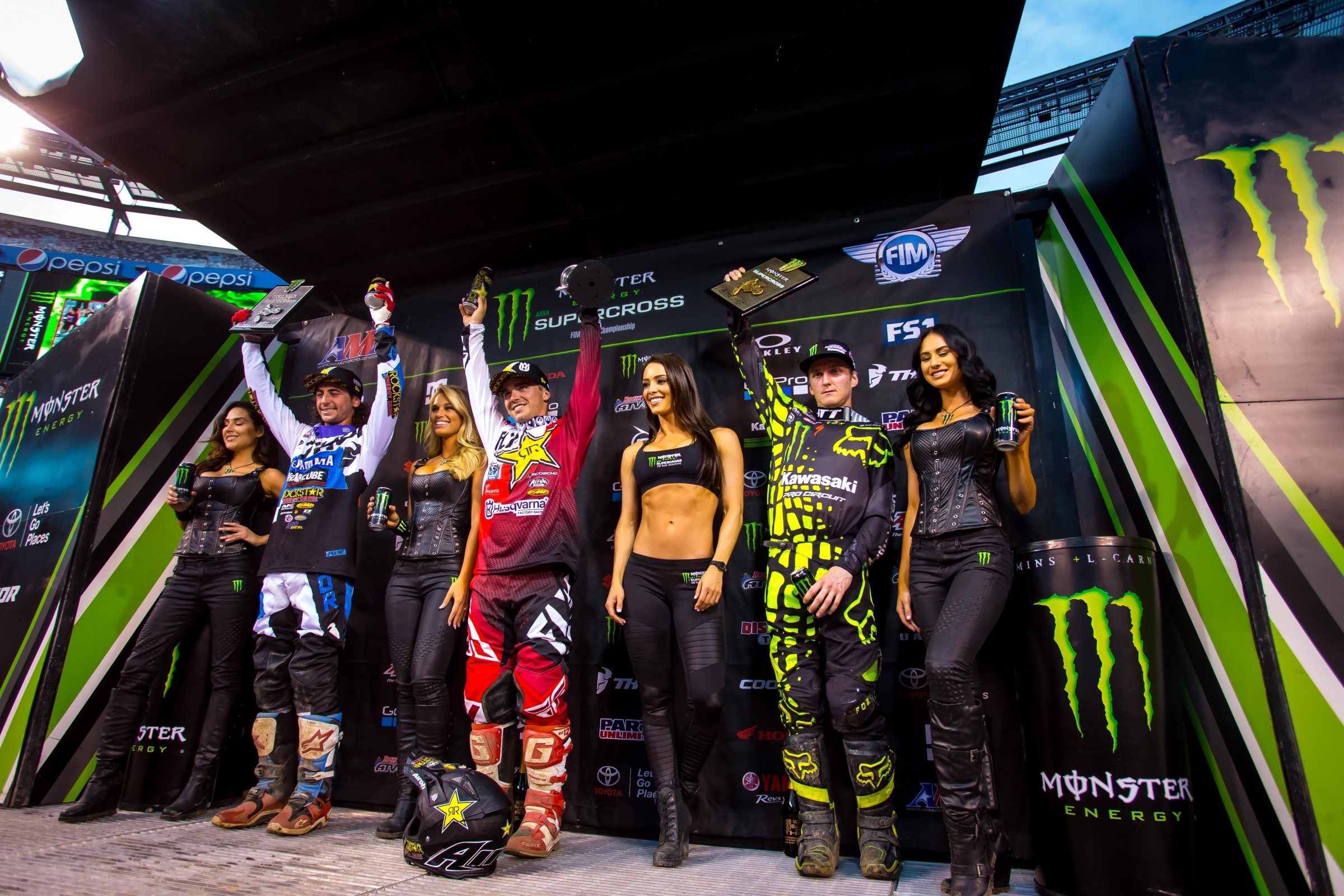 Just like the 450SX Class, the 250SX East Region also saw a major swing in the points, but not until the day after the race had finished. Joey Savatgy, who was leading the points, was penalized Sunday afternoon for not re-entering the track in the closest and safest spot possible after he went down in a rhythm section. Before the penalty was handed out, he had finished in third place and was leading the points by seven. Now the records show an eighth place finish for Savatgy and a one point lead for Jordon Smith in the championship.

Zach Osborne was dominant in the main event. After getting a poor start and rounding the first lap in seventh place, he threw caution to the wind and quickly passed each title contender on his way to the lead. He then opened up a 10 second lead over second place and easily won the main.

Dylan Ferrandis rode well to record his second podium finish of the year with a second place finish. It's been a solid season for the supercross rookie and he was visibly excited after the race was over.

Osborne and Ferrandis spoke with the press after the race. Savatgy did not attend.

Racer X: Dylan, congratulations. Was there something that you did over the couple week break that helped you make some gains that you were able to use tonight?
Dylan Ferrandis: Yeah, of course. I just ride more and get more confidence because that’s what I missed the first few rounds, and also get more speed in the whoops. Go a little bit stiffer in the suspension because when you come from Europe it’s really difficult to ride a stiff suspension that all the riders use. It was what I missed I think in the beginning of the season. Something that you have to learn week after week.

Zach, congratulations on the win. As it stands now, seven points down going into Vegas. Any kind of special strategy there, or is it just win and let things happen behind you?
Zach Osborne: Win and let things happen behind me. I think the format for next weekend kind of supplies its own craziness and chaos. So for me it’s just to go there and do what I’ve been doing today and just enjoy my time riding. No matter the case I’ll be the attacker, so I’m happy with that position. It’s clear cut what I have to do.

Zach, I’ve seen you win some races in the past, but it seemed like after winning tonight’s race you were especially happy.
Osborne: Yeah, it was a huge disappointment for me in Detroit to go down the way I did and to lose the red plate and just a bundle of points. Then in St. Louis I was sick the whole week before and managed to get on the podium, but to come back tonight and win, I felt like it was a clutch time. That was the only option really, was to win tonight and to come from 10th or wherever I started, to do it was pretty special.

Zach, you were obviously faster than everybody. I think your lap times were a little over a half a second faster than the second-fastest guy. Those early laps you were going wild. Was it just consequences be damned—I got to get to the front?
Osborne: Yeah, there’s nothing to lose whenever you come into the last two races 12 points down. I told myself that I needed to make seven points tonight happen, but realistically I could only control three of those. Just needed to get to the front. I was lucky to get through the first rhythm lane after the start because it was just chaos. There were bikes everywhere. I was just right in the thick of it. I was jumping blind and managed to get through there and then make some good passes and get to the front quicker than what I thought. I was kind of panicking at one point because I was sixth or seventh and I could see them going the other way on the triples, but I caught them quicker than what I had anticipated. That was a good feeling.

Can you talk about a line you used—you jumped out of the whoops and then you went around the outside. You passed a rider almost every lap through that section.
Osborne: Yeah, there were two ruts really close together and I felt like that I was just kind of waiting on them the whole time around through there, so I just started jumping out and not following people. Like you said, it allowed me to pass three or four guys there in that one spot. When you have something like that on the track and you know where it’s going to be, you don’t have to panic the whole rest of the lap trying to make something happen. You can just pick your spot and make it happen there.

Dylan, you’ve improved all season long and even tonight it seems like you improved as the race went on. Can you talk about how the track changed and how you were able to find your lines and catch back up to[Adam] Cianciarulo at the end?
Ferrandis: For me it was really difficult that kind of track because I live in California and now everything is dry and hard-pack. So, it’s not easy when it’s ruts in supercross for me, but I rode a little bit in outdoor and that’s really helped me to be back in softer pack and ruts. So I think that’s helped me a lot tonight, but also it’s like experience. I was struggling a bit all this season with my fork in the soft conditions like today. I think today we finally find something good, so that what really helped me tonight. That’s why I think I finally get a good podium on a really hard supercross.

Zach, where would you rank this among the tracks this year as far as ruts and the conditions out there?
Osborne: Obviously, I didn’t race Oakland or Seattle, but for us this is probably the toughest one. I expected coming into East Coast in having not ridden in almost 10 years on the East Coast, I expected it to be more like this every weekend. So, it’s been sort of a pleasant surprise for me to not have to deal with this much gnarliness every weekend. I enjoy it, though. I think it’s something that I kind of excel at and it sort of plays in my hand. It couldn’t have really come at a better time for me, at this point in the season.

Did you see what happened to Joey, and how do you think that should be addressed going forward?
Osborne: I did not see anything. I didn’t even know until after I got off the podium and then someone said something to me about it. But it is what it is. Like I said, no matter the case I’ll be the attacker next weekend and it’s clear cut what I have to do. So, I’m going to do my very best to make it happen.

Dylan, the supercross series isn’t over yet—there’s another race to be run, but do you feel pretty good about how you’ve done in your rookie season here in America for supercross?
Ferrandis: Yeah. I missed one in Detroit so I’m really not happy about this. I made some mistakes in the few first rounds, but I’m definitely happy with tonight. To get two podiums in my rookie season is not so bad. For sure I expected a little bit more, but supercross is definitely so much different than what we have in Europe. It’s something that you must need experience and race and training and really different to learn this. When I came here I never imagined that it was like this, the supercross. It’s so different what we used to have in Europe, like Bercy or Genova. Everything is different. So, you just need to learn and get experience.

Are you looking forward to next week, the East/West shootout? You get a chance to go against the other side of things, and against your teammates also.
Osborne: Yeah, in my situation, yes. If I were in a different situation, probably not. I think it’s a risky format. But the way it is, it’s cool. I enjoy the Vegas race. I was on the podium there last year. Hopefully it rains again like it did last year. Chances are probably zero, but we’ll see.

Osborne: Perfect. It will be like this concrete then.

Ferrandis: For me, I expect a lot for next weekend in Vegas because it’s normally hard-pack, what I used to ride every week on the Yamaha track in Corona. So, I’m expecting a lot. Also I really want to see all the guys on the West Coast ride because for me, my opinion is this East Coast championship, the speed of the top five is so much faster than maybe not Hill and Plessinger, but the top five here on the East Coast for me is really strong compared to West Coast.