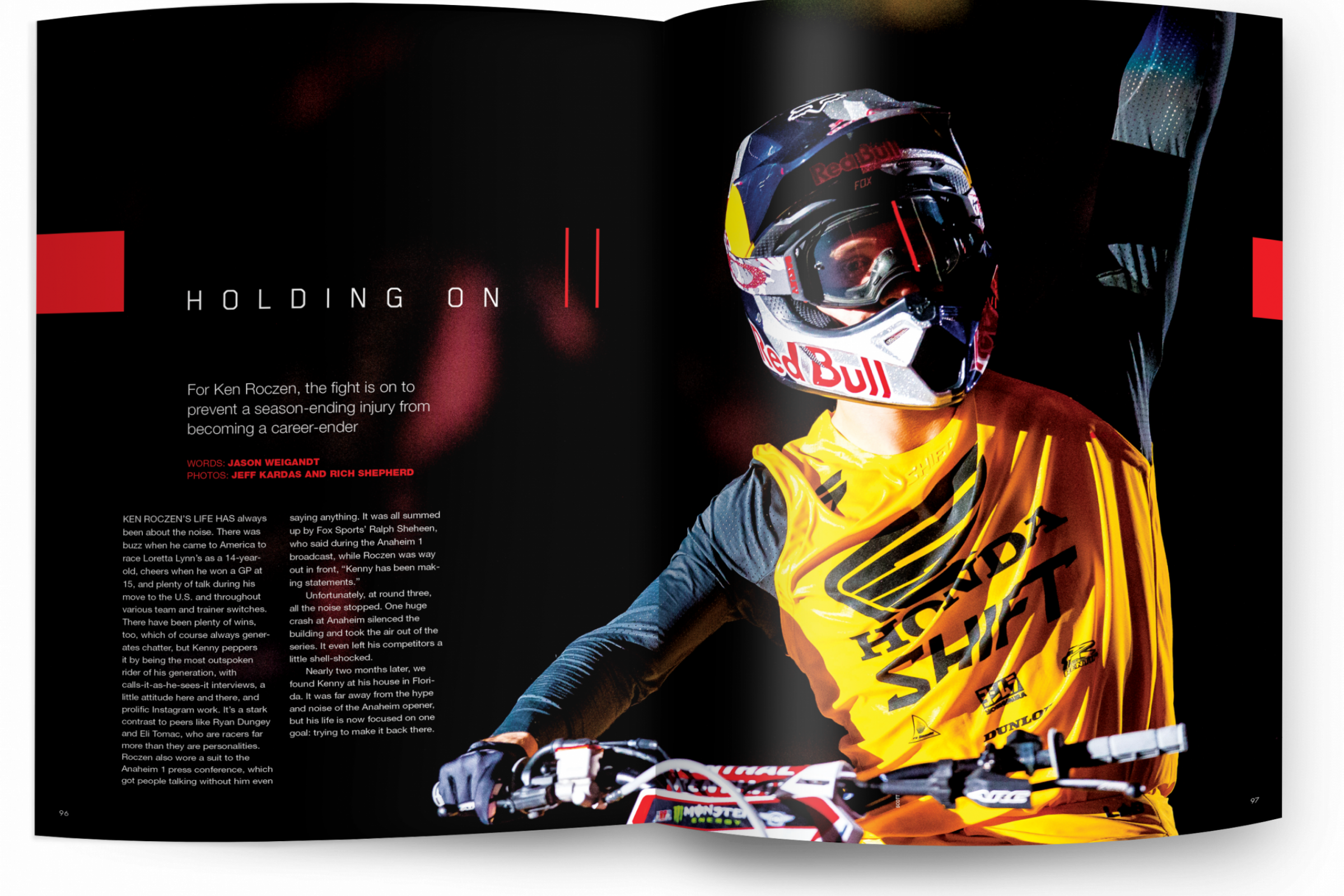 In the Mag, Visiting Roczen at Home

Ken Roczen has been very open on social media, sharing pictures and video updates of the wrist, arm, and elbow injuries from his horrific crash at Anaheim 2 earlier this year. He hasn’t held much back when posting some of the graphic imagery from during and after his surgeries. He’s stayed upbeat and remained positive about his condition, but social media only reveals so much.

There are many unanswered questions as to what all this means for Ken’s future. The world has been wondering what’s really going on with him and how he’s dealing with all of this. When Jason Weigandt and I were in town for the Daytona Supercross, visiting Ken was high on our list of potential stops in Florida, but we didn’t want to push—we wanted to give Ken his personal space.

With so much buzz surrounding Daytona, we made it a weeklong trip instead of the typical weekend trip to the races. The Baker’s Factory, the Nest, El Chupacabra Ranch, and Chad Reed’s house are just a few places everyone flocks to in order to scratch that Florida moto itch. Not only are there some amazing tracks to visit, but Florida is also where many of the elite motocross athletes live. Riders like Ryan Dungey, Marvin Musquin, Jason Anderson, Chad Reed, Adam Cianciarulo, Blake Baggett, and several more. We made the most of our trip and packed in as many stops as we could.

We were at the Daytona Supercross on Friday and Saturday, the Wild Boar GNCC on Sunday, the Ricky Carmichael Amateur Supercross on Monday, and Blake Baggett’s on Tuesday. With the weather not cooperating, a few other stops didn’t work out. In our search to find where to go and who to see in Florida we soon realized none of these guys ride on Wednesdays.

With only one more day in town, Weege bit the bullet, picked up the phone, and called Ken. Surprisingly, he picked up rather quickly despite not having Weege’s number—we assumed Ken must have been waiting for a call from a doctor or something.

Ken was in good spirits and Weege explained that we’d like to come do a video interview with him to see how he was doing. He happily agreed and told us to come over later after he finished doing some running around. When Ken called later that afternoon, he told us we could come a little earlier if we wanted to get the camera equipment setup, but not to stress about getting there at an exact time.

On the way there I was a bit nervous to be honest. Not in a star struck way, but rather due to a certain situation I was involved in with Ken last summer that might have given him second thoughts on letting me inside once we got there.

At the Washougal National last year, I stayed at the same hotel as Ken. Fox, Ken’s gear sponsor, hosted a media intro for their new gear following the National and invited us to join. It was Sunday so the majority of the hotel was checking out and everyone had their bags in the breakfast area. My roommate for the weekend, Arik Swan, and I did the same and wheeled our gear downstairs for some bagels and coffee.

We had a bunch of stuff. I had a massive pelican camera case that could probably fit a small person, as well as another camera case, and a backpack. Swan had a backpack of his own and a full size gear bag. After breakfast the Fox guys informed us that we had missed the bus to the track, but not to worry, they would take us in their car to the event. Everyone grabbed their stuff and headed to the valet to load up the rental.

This thing was packed to the brim. The trunk was full, the guys in the back had gear bags on their laps, my pelican case was in the middle back seat blocking the rear view mirror, and I had the rest of my stuff on my lap. Right before we were about to pull away someone opened my passenger door and started screaming at me. It was Ken’s girlfriend (now fiancée), Courtney. Ken was standing next to her with his arms crossed with a complete stone-cold face. Courtney yelled, “If you’re going to steal his stuff you might as well be slyer about it!”

I was so confused.

Sitting next to the car was a red Fox gear bag. Ken’s Fox gear bag. One of the Fox guys grabbed it thinking it was Swan’s or mine. Realizing the situation, I defended myself saying, “There’s a big misunderstanding here. I wouldn’t do that, I work at Racer X.” Ken rolled his eyes in disbelief and Courtney wasn’t buying it either. I apologized again and they took the bag and we left. At that point I was definitely worried I was never going to get another interview with Ken, but all I could really do was laugh at the irony of the situation.

When we got to the event, Ken and Courtney were there and I knew I had to smooth things over. I walked over to Courtney and before I could even open my mouth she started apologizing and told me why she got so fired up. She explained that people try to steal stuff from Ken all the time. They take stuff out of his bags at airports and the last straw was back in Anaheim [2016] at Angel Stadium when they returned to his motorhome and found someone inside trying to steal some of Ken’s watches.

I totally understood that and the reality is from their perspective, that’s exactly what it looked like. We wheeled his bag through the lobby of the hotel, to the curb, and nearly loaded it into the car. From then on, Courtney and I have been cool. I also talked to Ken that day and he told me not to worry about it, but he still seemed a bit skeptical.

When we got to his house, all seemed fine between Ken and I. I thought maybe he didn’t remember me. We went inside and did the interview and as Weege and I were saying goodbye, Weege says to Ken, “Remember Kyle? The guy that stole your gear bag?” Ken looked up, smirked and said, “Oh, I remember.”