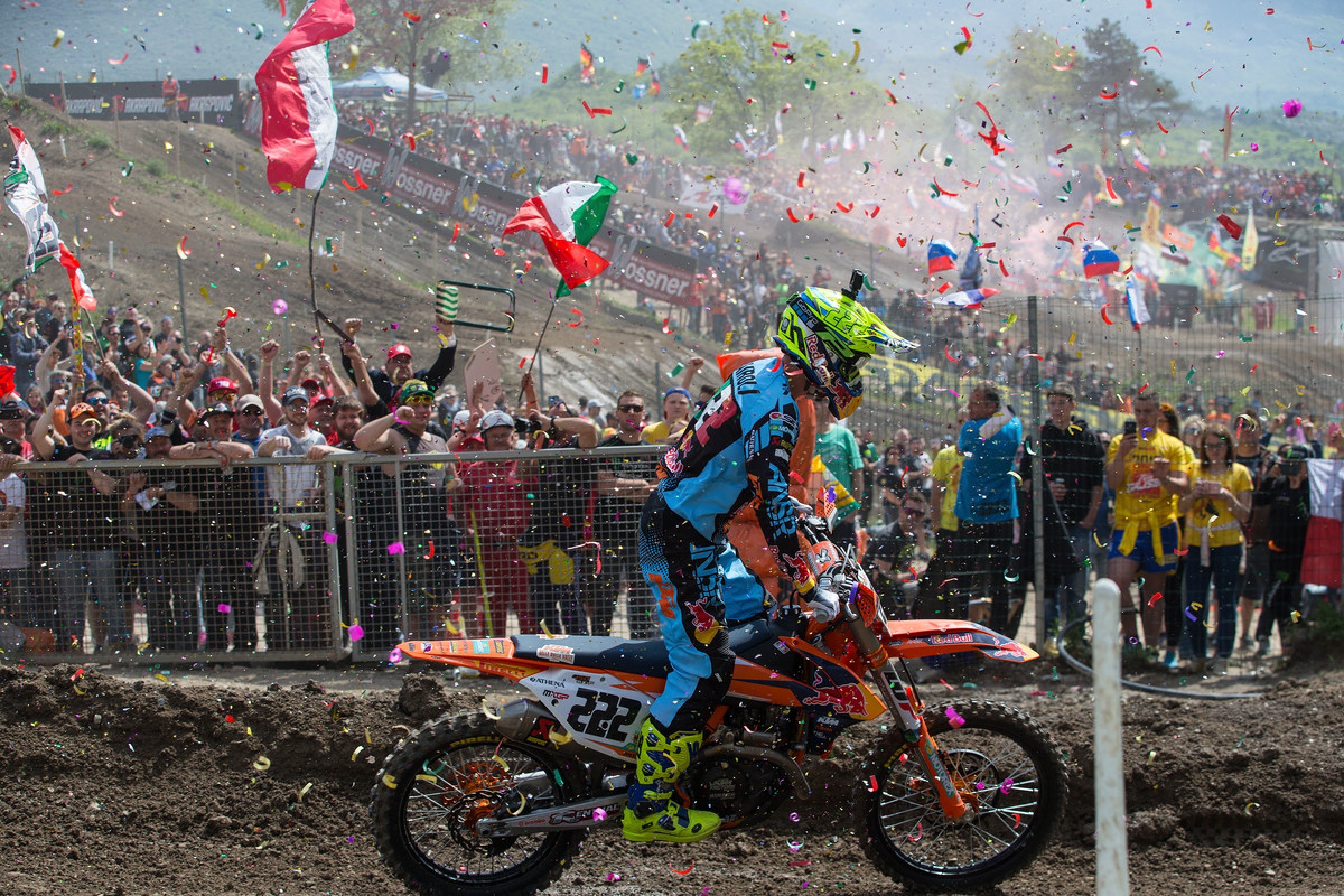 Sometimes us media types like to talk about an athlete having the “game of a lifetime,” or in the case of motocross, “the race of a lifetime.” Yesterday, in Arco de Trentino, Italy, at the base of the Dolomites, we may have seen the race of Antonio Cairoli’s life. The eight-time world champion put on a performance for the ages at his home GP, showing the kind of superb race craft that only comes after years of hard work, extraordinary skill and relentless drive—and he didn’t even win the moto! But it was enough for the overall—the 79th and arguably most impressive of all.

Cairoli, the most respected and successful rider in Europe since Stefan Everts, won the first moto in MXGP (450) in Italy on his works KTM, beating much younger challengers in Swiss rider Arnaud Tonus and reigning MXGP World Champion and points leader Tim Gajser. Cairoli, who was injured and not really on form for parts the last two years, has ridden all season with a revitalized passion. With younger challengers like Gajser, 2015 MXGP World Champion Romain Febvre, and the much-ballyhooed Jeffrey Herlings, the winningest rider in the MX2 (250) history, all trying to usurp him as Europe’s current King of Motocross, Cairoli has dug in and somehow found new motivation. This weekend in Italy, it was on full display for his partisan fans, who could be heard cheering for him all around the rocky and slick Trentino circuit.

Cairoli was fastest in qualifying on Saturday, then won the first moto with a solid performance. It was the second moto that was his masterpiece. After getting squeezed outside for the Fox Holeshot by the Honda-mounted Gajser, Cairoli bobbled on the inside of the second turn and got tangled up with several other riders. He got going again in maybe 20th, and on a tight and choppy track like Trentino it seemed like Cairoli’s chances for an overall win all but vanished. Gajser was out in front and Cairoli would have to reach second to earn the overall win.

For half the moto, Cairoli did his best to pick his way through, but the going was tough—especially when he came up behind the Yamaha-mounted Tonus, who was having his best ride since returning to Europe and holding sixth place at that point. Cairoli finally found an opening by jumping to the inside of a plateau jump which was followed by a 90-degree left-handed corner, with a sharp wall as the outside berm. In the simplest sense of terms, Cairoli ran Tonus out of real estate, beating him to the exit of the corner and blocking him using his outside momentum. It was an old trick, used to perfection by the master.

Next it was Rockstar Energy Husqvarna’s Gautier Paulin who would fall victim to Cairoli and his inside line, then Monster Energy Kawasaki’s Clement Desalle, and then the MXGP Class rookie Herlings, who was also having his best race of the year, albeit just trying to hold on to a podium spot. When Cairoli made that pass, he was still only third, with less than two laps to go, but the crowd wanted more, and it was obvious that Cairoli did too.

With the race in the waning moments Cairoli kept his head down, kept charging and kept gaining on runner-up Evgeny Bobryshev, the leader Gajser’s teammate. Using the exact same spot and pass that he did on first Tonus, then Paulin, then Desalle, then Herlings, Cairoli leaped to the inside of the big Russian on the last lap and took the real estate away from Bobryshev with his fifth straight picture-perfect block pass. And had there been another lap, he might have passed Gajser too!

Antonio Cairoli may or may not catch the wins record of Stefan Everts (101) or the world titles (10) but what he did yesterday in the second moto in Italy puts him firmly on Stefan’s level. It was a masterpiece of motocross racing, similar to Everts sweeping the 2006 Motocross of Nations, and maybe the peak performance of Cairoli’s epic career.

Watch his GoPro of the second moto:

Or TV host Paul Malin’s fantastic solo call of the end of the moto: