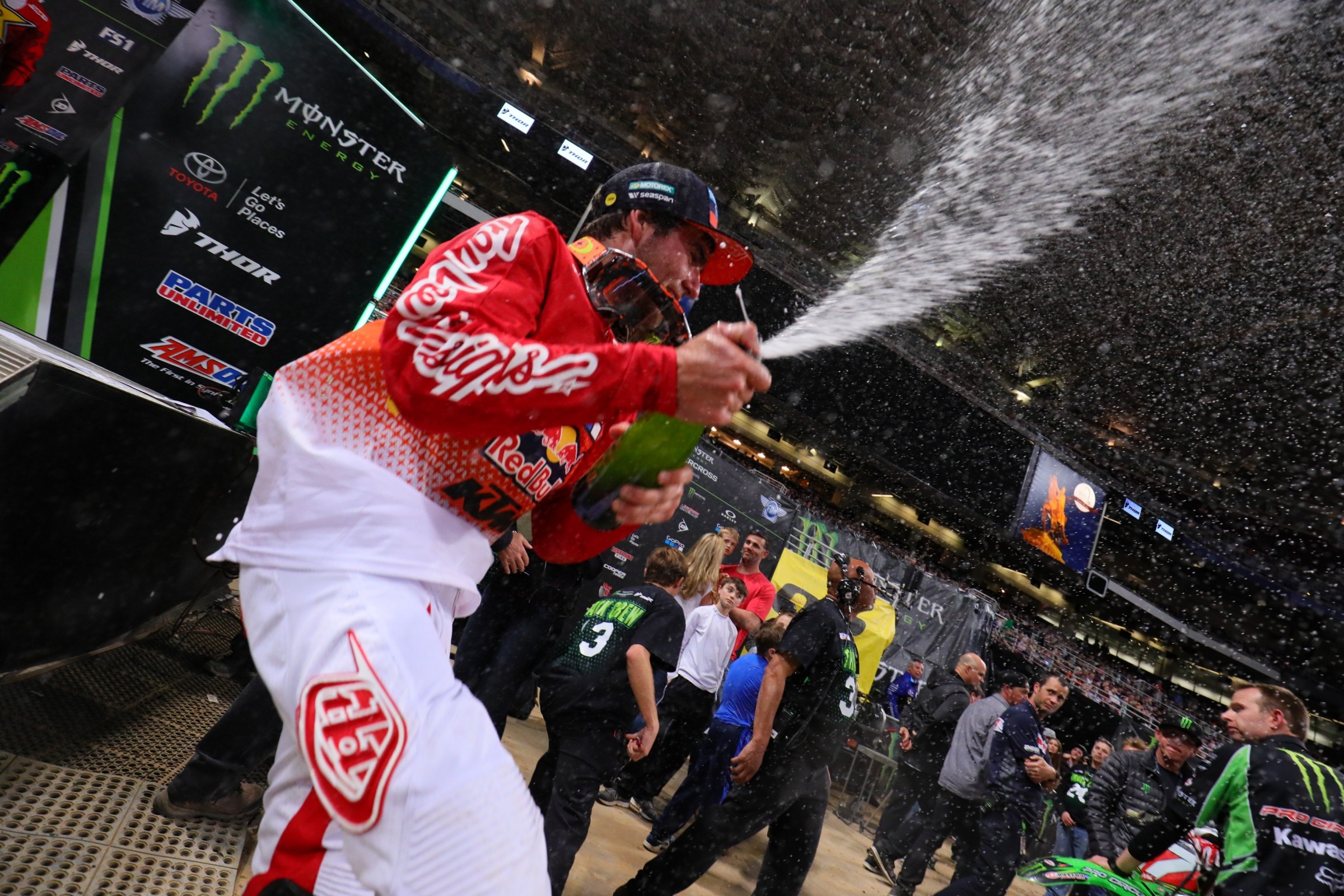 Smith is right in the thick of the championship chase following his second consecutive victory, as he trails Savatgy by six points. The East Region now goes on break, returning at East Rutherford on April 29.

Racer X: Zach, you had the crash in practice and skipped the first round of qualifying and powered through in the heat race for the win, but in the later stages of the main event were you feeling some of the effects from that crash?
Zach Osborne: Yeah, not so much the crash as just being sick in the week. I got some kind of stomach virus on Wednesday and it took a lot out of me. It was hard to kind of get in enough calories and hydration and kind of make up for that. So it was a tough day already and then I had a big one in the first practice. It was a quick little twitch of the front end and it spit me off. I banged myself up pretty good. I felt really good in the heat race. The main I felt good for like eight or nine laps. My mechanic gave me halfway [signal on the pit board] and I felt still pretty good. I was right there then with three or four to go my legs were pretty smoked. I just rode it in for a podium. After the week I’ve had and the start to the morning, I’m okay with that.

Joey, in the later stages of the main event it was obvious you were kind of making a run through the whoops. You had found something there. Were you kind of strategizing and planning an opportunity to make a pass there in that section, or was there other spots on the track you thought you could have as well?
Joey Savatgy: No, that was I felt like one of the few places that I was going to be able to make it happen, especially after the mistake and putting ourselves in a position to have to make a pass. I felt good in them. I felt good all day. Felt good in qualifying. Had a great heat race and put ourselves in a great position in the main event.

Jordon, congratulations. Kind of a carbon copy of a week ago, having Joey behind you in the later stages. Take us through the last two laps and how you were able to hold the composure and ride this thing out for another win?
Jordon Smith: Yeah, I think I had a pretty good lead. I felt like I had a little cushion there with two laps to go. Then on the last lap in the rhythm section, the 2-3-3 I came up really short there and kind of got a little sideways. Just tried to protect my lines there at the end in the last couple corners. There were some pretty tight turns. I knew that he was getting a pretty good run through the whoops, so just tried to protect it and ride it to the finish.

Joey, just take us through the early stages of the race. You had the lead and then you ended up off the track. What happened there?
Savatgy: Like I said, put ourselves in a really good position to win and started to pull away. Had a little bit of a cushion, I think it was right around three seconds. Just came around that dragon’s back and the rear end kind of stepped out. Kind of got squirrely. Helmet hit off the handlebars then went off the track. Actually ran into somebody, I don’t know who. Ran into somebody and then actually got into it with someone underneath the tunnel—a lapped rider. I’m not really sure who. Ran into him and actually knocked my front brake pretty far down to the point where it was almost not useable. So it took me a little while to get accustomed to that, but after that I feel like we made a good charge. It’s just frustrating. We’re always in a good position and it seems like we’ve been giving these things away. We’ve just got to eliminate that and I think we’ll be good.

You are all now in a championship hunt. Joey, you’ve been there since the start. Jordon, you’ve kind of come into this the last two weeks. Zach, you have a pretty good deficit to make up. Do you guys come into these next few races any differently? There’s a break going into the next one, New Jersey, and then a unique race in Las Vegas. Do you have to make things happen or is it just keep going how you’ve been going?
Savatgy: I think we keep going how we’ve been going. Like I said, I think if we eliminate these mistakes that we keep having week after week I would be happy. I’m tired of sitting here talking about it. So I think if we can do that, I feel good. I feel like things have been clicking the last couple weeks. Bike changes we’ve made have been good, and I feel good. So we know we can run the distance and we have the speed. So nothing changes. The plan is still the same—go out there, put ourselves in a good position and try to win main events. I haven’t been doing that enough this year and I feel like we have the perfect opportunity to. Just got to execute.

Smith: For me, the last two weeks couldn’t have really went much better. I put myself into good positions and just tried to ride a smooth race tonight. I knew that the track was going to be pretty broken down. I’ve only been to New Jersey once to race and I remember it got pretty broken down. So really just the same thing. I just need to keep putting myself in good positions and keep fighting.

Osborne: For me, the landscape changed big time last week in the first corner. I went from the attacked to the attacker. It’s pretty clear-cut what I have to do, and I just have to make it happen.

Jordon, did the win last week change up your attitude at all or confidence?
Smith: A little bit. It gave me a little bit of confidence, obviously getting your first win will. But I kind of knew that I could do that all year. It just felt like a few things needed to go right, and they went right again for me tonight. I got a good start, made a couple quick passes I think in the first lap through the whoops. Like I said, I knew that the track was going to be really tough. It was pretty soft here tonight and a lot of tough rhythm sections. The dragon section was pretty tough. I knew that if I just kept at least a little bit of pressure there was a chance that Joey would make a mistake and I would be able to capitalize on it. That’s what happened.

Jordon, did it make it a little easier down this stretch? You had some pressure on the last lap. Did it make it easier since you’ve now won a race to maybe be a little more relaxed in that situation?
Smith: Yeah, for sure. This week I was actually able to kind of think about protecting the inside, whereas a week ago I was just thinking about winning and not so much about protecting the inside. So I was definitely able to kind of push to the end a little better and focus a little better this week.

You guys have a break now until New Jersey. What do you in this time off to not overanalyze the situation that you’re in?
Smith: I’m heading to California to get in a little outdoor testing. We don’t have much time in-between the end of supercross and the beginning of outdoors. So that will take my mind off of it a little bit and kind of refresh the batteries, recharge the batteries and be ready to come out swinging for New Jersey.

Savatgy: I think outdoor testing a little bit. Try to switch it up. Not that we’ve been going at it that long, especially when you compare it to these 450 guys. But definitely got to get a little bit of outdoor testing in. We have those I think three weeks or so off, so change it up a little bit, but obviously one task at a time. The goal is New Jersey, and then obviously the goal after that will be Vegas. But obviously it’s important to get outdoor testing in to get a setting going into the first round. But in the same breath you don’t want to venture too far. You’ve got to remember what the important goal is.

Osborne: The last few years I’ve done the whole outdoor testing thing and this year I’m going to try to approach it a little bit more with the same setting that I ended with last year and just kind of stick to the program at the ranch in Florida and just keep going.

Zach, you skipped the second practice session. You said you were sick all week. Was that a plan to skip it or did you skip it because of the crash? Or did you just miss it, like you just forgot about it?
Osborne: No, that’s not the case. I crashed hard. It shouldn’t have been a big crash. It was so quick I couldn’t do anything about it or get away from it. It just spit me kind of off the bike. I hit my chest and my face and everything else. We just kind of collectively decided it’s only like 45 or 50 minutes between practices, so we just sort of decided we’ll take this one off. Obviously they kind of re-groomed some stuff for the last practice, so I just watched the film and chilled and rode the third practice.

Zach, when you have a week like you did, having such an illness, where do you find that strength and that motivation to go out and come away with a third place?
Osborne: Weeks like this is when you lean on your winter and your December and November hours and base a lot, because there’s not a lot going on. It’s more just laying low to get well, so it’s a time when you have to look back at those hours that you’ve put in and know that you have that base in training from the winter to sustain you during those few days off.