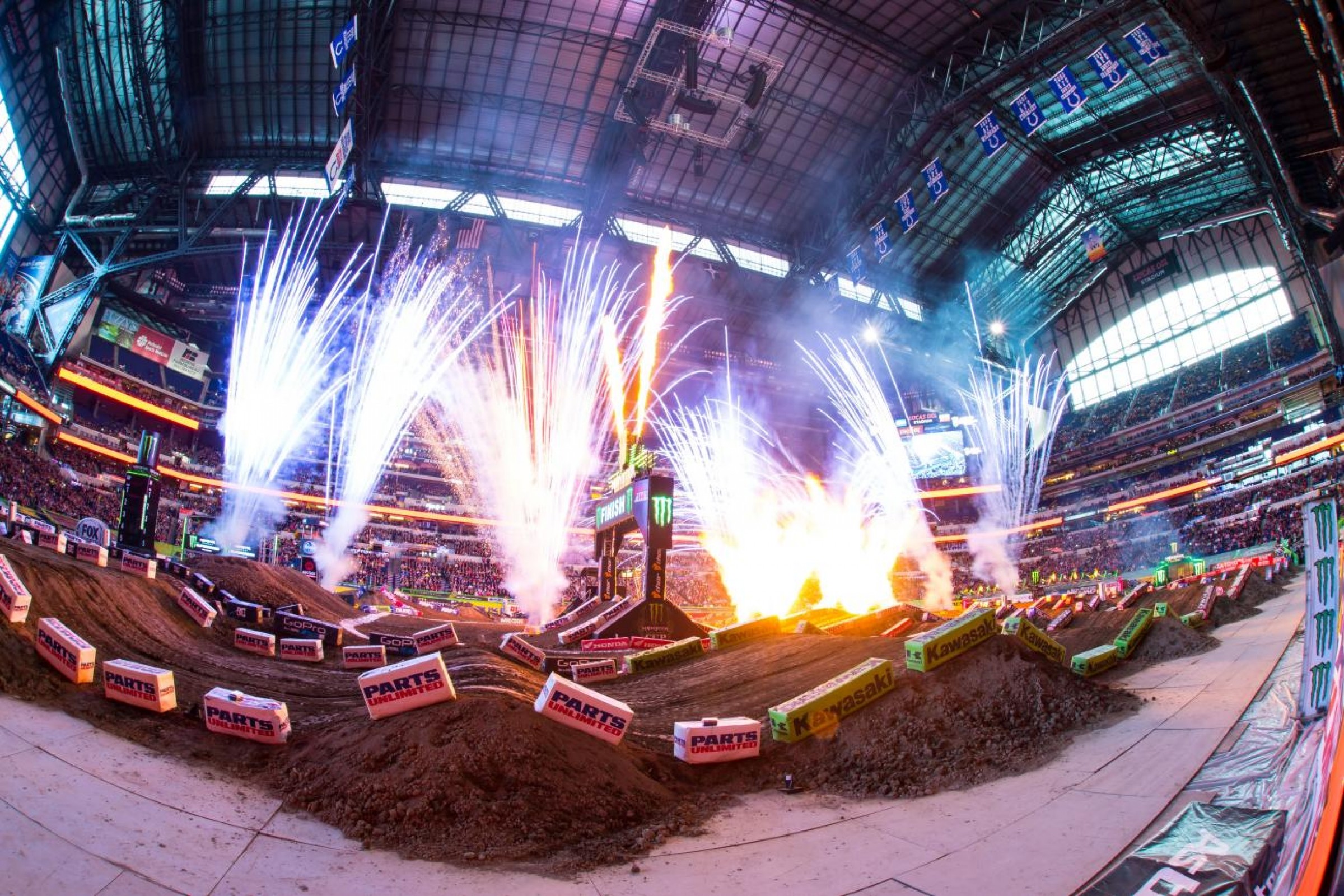 Back at it Again

It’s been a long road for Adam Cianciarulo, who before 2017 hadn’t raced supercross since 2014, but he finally got back to his winning ways by motoring away from the field in Daytona. Cianciarulo’s emotional win couldn’t have come at a better time either—points leader Zach Osborne ended up taking fifth, allowing Cianciarulo to close the championship gap to just nine points. If he wins again in Indy we could see an extremely tight points situation develop in the 250SX East Region. –Aaron Hansel

Although Zach Osborne, who crashed in Daytona, still has six points on Joey Savatgy, it’s very important he wins in Indy for a couple reasons. First and foremost, it never hurts to score more points than anyone else. Secondly, he can’t afford to give guys like Savatgy and Cianciarulo any sort of boost, be it in points or in confidence. Osborne needs to shut down any momentum from the opposition by dropping the hammer and administering a serious beat down on Saturday. -Hansel

Thanks in part to the longer, timed main events, Monster Energy Supercross has presented the riders with plenty of tough tracks in 2017. Things aren’t likely to get any easier this weekend. Indianapolis is notorious for getting nasty, and last year the ruts were especially tough, leaving one to wonder just how crazy things might get with the new format. Like some races we’ve already seen, it could come down to another night of survival in Lucas Oil Stadium. –Hansel

Injuries have severely hampered Justin Barcia’s supercross output the last several seasons, but last week in his heat race in Daytona we saw a glimpse of the same Barcia everyone thought was poised to start regularly winning races. Things didn’t go as well in the main event—Barcia crashed in the first turn and ended up 11th—but his convincing heat race win was a big step in the right direction. We’ll see if he continues to progress in Indy. –Hansel

2.42. That’s the average number of points Eli Tomac would have to pick up on Ryan Dungey to erase his current 17-point deficit and claim the Monster Energy Supercross title. A tall order Tomac told us after Toronto, when the guy in front of you is one of the most consistent riders in history. Tomac certainly has the momentum on his side, winning five of the last seven races (finishing runner-up in a sixth), but his margin for error is slim. Starts have been critical this season, and as Daytona showed for Dungey, coming from the back to second isn’t a guarantee. We’ll see if Tomac can cut into Dungey’s points lead this weekend. –Chase Stallo

Despite not being a big records guy, Chad Reed has expressed a desire to get a win this year, in the process becoming the oldest winner in AMA Supercross history. Reed, who turned 35 earlier this week, is currently second all-time behind Mike LaRocco. The current GEICO Honda team manager won his last supercross at Indianapolis in 2004, at the age of 33. In a recent interview on the Pulpmx Show, Reed talked about getting that win. “I want to get a W. I’m not a big records guy but this next win, it’s a big win for me. It really is. The number 45 doesn’t mean anything to me, but I think being the oldest guy to win, I think 12 seasons of winning or 13 seasons of being able to win. I already have the record, but it would be a bigger record. So I just think that there are things when all’s said and done, I’d be proud of that.” Can he do it this weekend where LaRocco set the record? –Stallo

Arm pump is a common source of frustration for a rider of any level. Alex Martin revealed to Racer X after Daytona that arm pump is one of the reasons he's had such an up and down season for far. “It’s one of those things where the speed’s there, so I can do it in practice, put down a fast lap. I won my first heat race. So there’s a lot of positives, but anything over five or six laps I’m toast.” As Hansel mentioned above, Indy is known for being one of the most rutted, demanding tracks on the circuit. We’ll see if Martin can stave off the arm pump this weekend. –Stallo

As Steve Matthes pointed out in his Observations column this week, GEICO Honda’s Christian Craig has the chance to be the ultimate spoiler going forward. “If you’re counting, that’s three disasters and one podium. There’s nothing Craig can do at this point other than try to be the spoiler and jack up this title chase by winning races and getting on the box,” Matthes wrote. Craig offered no excuses after a season-worst 14th in Daytona. “The guy I am during the week and even in practice or in heat races isn’t the same one in the main. It all starts with a good start and I’ve been absolutely terrible at starts in the main. I’ve made a lot of changes this past year and I kinda need to get my head back to where it belongs.” Can Craig play the role of spoiler this weekend? –Stallo

On a recent tour of his El Chupacabra Ranch in Florida, Blake Baggett told our Jason Weigandt that he’s really enjoying supercross this year. He said in the past, he didn’t enjoy supercross and it was more about “getting the laps done and leaving” during training. Baggett has turned the corner in recent years, and really excelled this year, even though his results may not show it. Baggett has gone 3-5-7 over the last three rounds, which included an ironman effort at Daytona, coming from last up to seventh. Tough, rutted conditions should play in his favor. Can he return to the podium this weekend? –Stallo