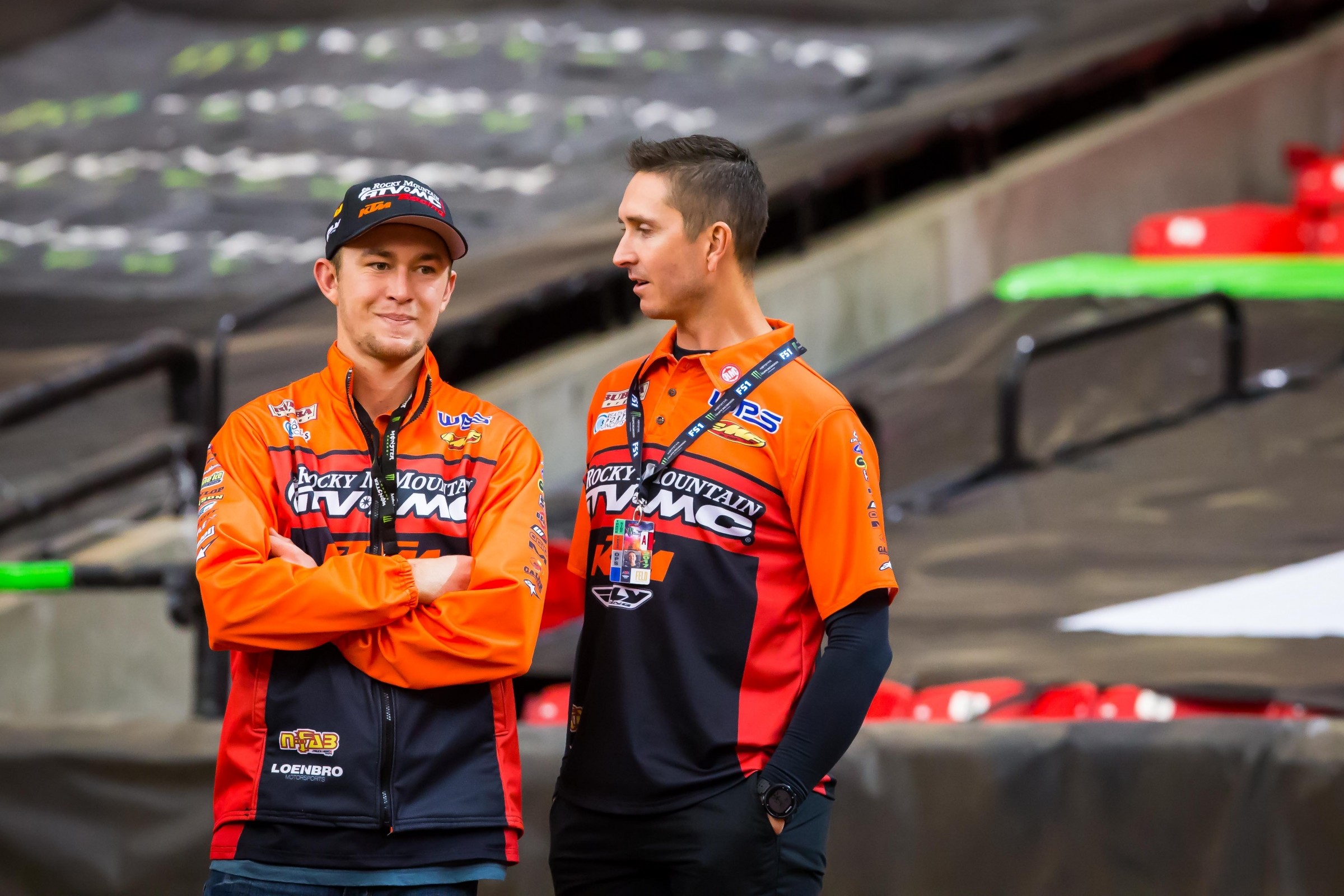 There was once a privateer team in the pits not unlike most other privateer teams. Butler Brother’s MX [BBMX] was just that—a family team, chasing the individual dream of success as racers. It turned into something totally different. The Butler brothers eventually went into managing a team of other riders. First, a strong privateer effort with growing results and support, and then in 2014 the team finally gained factory support from KTM. Now known as team Rocky Mountain-WPS-KTM, team riders Davi Millsaps, Blake Baggett, and Benny Bloss get full factory bikes, and access to the same equipment as Ryan Dungey or Shane McElrath get on 450s or 250s.

This long slog from privateer ranks to factory support was fixated on one goal: to make the podium in the toughest dirt bike division in the world—450SX in Monster Energy Supercross. Blake Baggett got it done for the team, finally, on Saturday night in Atlanta.

We saw team owner Forrest Butler after the press conference, his eyes red and watering from a combination of tears, and also a face full of champagne courtesy of Baggett. But it felt so good! He was flanked by Michael Byrne, who rode for the team a few years ago and returned this year as a rider coach. Amid high fives, fist bumps and more for a very happy team, we asked Forrest about the journey.

Racer X: I know from what I’ve heard from the inside, this is not just any old podium. This was a huge goal for the team, a big mark, everything you have done here was based around finally getting on that podium.
Forrest Butler: Yes! I already Instagrammed one thing—monkey off the back. It was huge. You come around our truck, we joke around about it, how many heat race wins have we had in the last two or three seasons? I don’t even know. It’s really up there. Then how many times are we right there for a podium? I mean, two laps to go, three laps to go, we have been right there. And then the way this was unfolding, Eli [Tomac] got him, Jason was coming, then Blake picked it back up, but Jason [Anderson] was still coming … and you know Jason is going to go for it on the last lap, and he went for it! It was just like … I mean, last year, twice, Jason just cleaned our guys out. So I don’t care, I’ll say it, that was redemption. Karma! [Laughs] He went down and he didn’t get Blake, because if he didn’t go down himself, they were both going down. He was like a bullet. So after that, it was a sigh of relief, it feels like a win. But at the same time, now we want to win. We’re joking around and having a good time, but at the same time, with Blake, we’re like, “Daytona is in two weeks, baby!”

You’ve been close the last few years, you have factory KTM support, but five years or seven years ago, did you think 450 podiums were on the horizon?
Yeah, you can laugh at me if you want, but yes. Every year you want that to be the reality. But this class is growing so quickly that it’s hard to keep up. Everyone is going so fast. I felt like going into this season, this was going to be the best shot we’d ever had. Davi [Millsaps] and then Blake, the work he’s done with Michael Byrne, he’s been so fast. And, this year we went into the 250 class, and Benny [Bloss] was riding so well, we were so excited, thinking, “Well, at the very least we’ll get one there.” We had really high hopes for Benny on that bike. Then boom, Benny gets hurt last week, and then Davi went down in practice today and couldn’t race. To have Blake come out and win his first heat race, and then, really, he just finally put his 20 laps together. He’s been fast all along. So we’re relieved, we’re excited, just a whole lot of emotions right now. It was also great to get it for Rocky Mountain in our first season with them. It’s great. But now we’ve got to get better.

As your team grew, it could have gone in many directions, but you ended up in the 450 class. A 450 supercross podium is the hardest one to get.
Yeah, we did it backwards. And to bring it full circle … not to keep hyping Michael [Bryne], but he’s been so important to us. Michael was the first step away from our privateer days with JT [Jason Thomas] to having an ex factory rider, a podium guy, and ever since we started with that, we’ve been chasing it. And it always got away—like Michael breaking his leg at Unadilla while leading! Everything has been there. I guess there’s just so much enjoyment, and if you do it with your family and your supporters it’s always going to be good. But to do it this year with Rocky Mountain coming in, to do it with Michael coming back in, it feels so good as a team to achieve it. At the same time, it gives me full confidence that this is only the beginning. We want to win, and we’re going to.

It’s strange that putting the main events together had been a struggle with Blake, because he’s always been the opposite. He’s usually not great in practice and qualifying, but in the long races, that’s usually where he’s at his best. This year we’ve seen great qualifying, great heat races, but the main events have been tough. Is there something you can point at that needed to change?
Um, I can put the finger on it, but I don’t want to verbally bash my whole team! [Laughs] We’ve worked through some things, and we’ve had such great support from KTM. And getting to know Blake, there’s such great talent wrapped up in him, but it just takes a bit of time to figure it all out. But really, what are we, round eight? That’s not really that long. His talent is there, his coaching is there, the team is there. To us it’s a big moment, maybe it seems surprising, but it wasn’t for us.

Not this year, no, but 10 years ago. This was a humble team.
Ten years ago, no! Back then, it was just “Wow, I’m going to make money in motorcycling?” [Laughs] No way we thought this back then. And it’s funny because when we were going back into the 250 class since 2009. We won and podiumed 250 races back then, and as I started to think about going back to that class, there was almost more pressure in that class, because it was like “Well, we had better podium in that class. We had better win in that class.” Because we’re a full factory effort this time. Then that crashed and burned immediately. So I feel for Benny. That one really hurt. So for Blake to get our first one in the 450 class, that’s special.

We know Benny has to be gutted to get hurt in round one. But I know that one stung really bad for you guys, too.
Oh yeah. But that’s just the sport, right? Even Max Markolf, our amateur kid, he’s here for the Motofest, he wins his Arenacross Lites heat race, we’re all pumped, then he crashes in the whoops and breaks his collarbone. Then today Davi, first practice, he crashes and hurts his wrist. Yeah, I didn’t even want to be here anymore! I was ready to go home this morning! Pretty amazing to have it end like this.

You know as well as anyone that racing doesn’t make any sense whatsoever when you put it on paper. Like you said, yes you can make money in motorcycling, but it’s not a lot of money when compared to the amount of hours you put it, and all the stress that comes with it. Plus, your team has gone through some crazy stuff the last year [note: In 2016, the team’s semi was robbed after Anaheim 1, and last summer the trailer burned down]. Is this why you do this stuff? You can’t get this feeling in a normal job.
No. You can’t. At this point, 14 years in, this is my job, my career, and this is my business. At this point, anyone we hire, riders or staff, anyone, if you don’t have that passion, this isn’t for you. So yeah, with passion comes what? Enjoyment and excitement when you do well. But we’ve been going home every week in this first part of the season … we’ve had top fives, we’ve won heat races, Davi was fifth in points, we were doing something good every week. But we were leaving mad because we weren’t on the podium. So when you finally do it, yeah, you’re going to celebrate it a little bit.