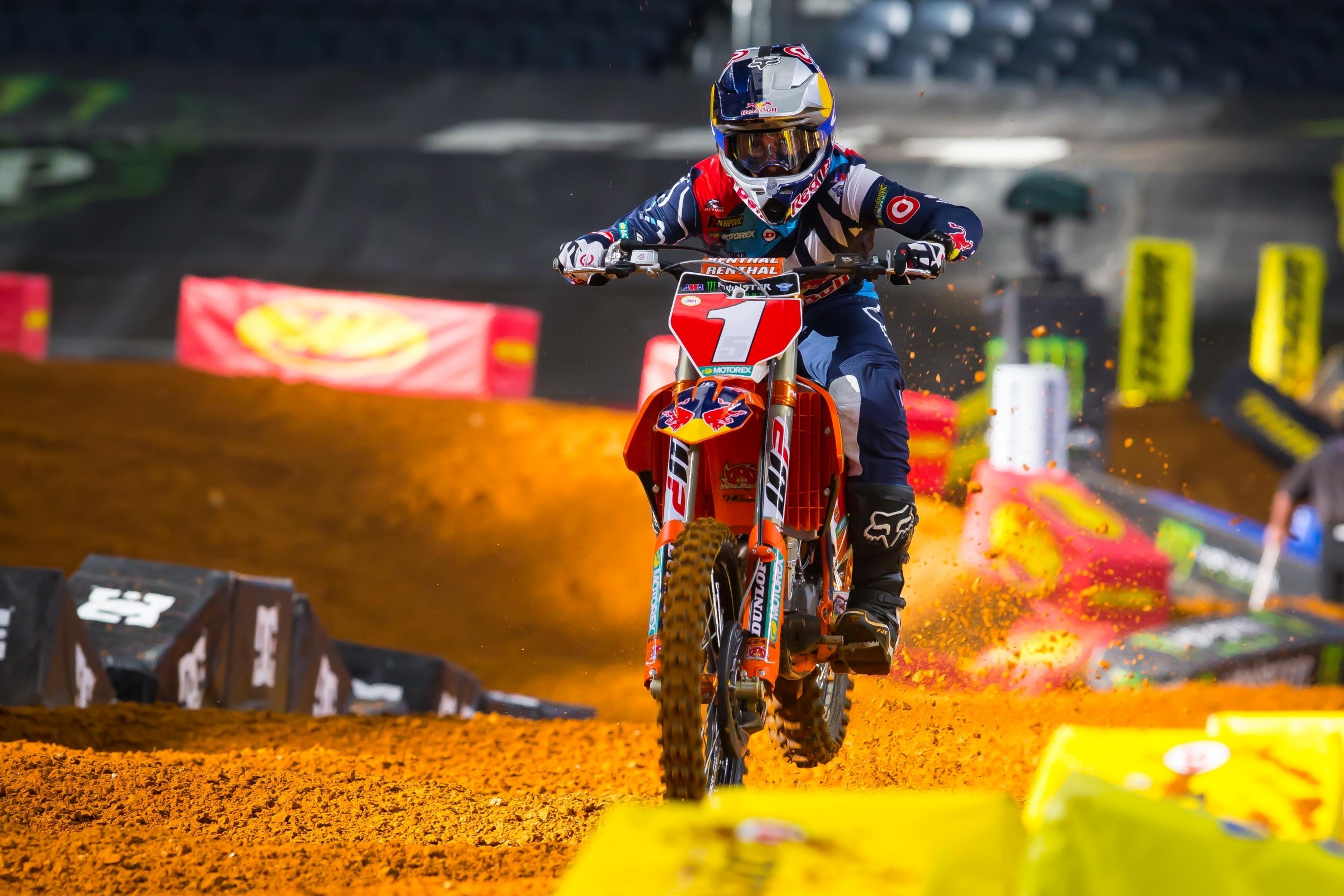 3 on 3 Questions for Minneapolis

Jason Weigandt: I think, if you spit all the info into a computer, it's going to tell you Joey Savatgy will come out the champion. Like, seriously, I’ll ask Siri right now who will win the 250SX East Region Championship. Ah, she responded with “Which sport? Basketball or hockey?”

Anyway. Savatgy has a slight edge in experience, because he held the red plate at different times indoors and out last year. Zach Osborne is always solid, but we’ll see if he can take the leap that Savatgy already has. I see Christian Craig with the ability to go as fast or even faster, but a lot of times in this class, you have to lose a title before you can win one. Savatgy has taken all the steps. The rest of the class has huge question marks. Can A-Mart carry what he did outdoors on a Yamaha indoors on a KTM? Can Star Racing Yamaha’s trio get in the mix? Can RJ Hampshire or Jordon Smith finally capitalize on their potential? And what about the ultimate wild card, Adam Cianciarulo?

Jason Thomas: I think this is a two-horse race between Joey Savatgy and Christian Craig but there are some dark horses in the mix, too. Joey has to be the favorite on paper after winning several races both inside and out last season. He had some health issues that really derailed his results but when he was healthy, he was fantastic. I look for him to come out swinging this weekend.

I really believe that Christian should have been on the West Coast as I think his skill set suits those races better. He is great in big whoops and his weight wouldn't be as much of a liability on the harder dirt. He has experience on the West Coast and would know what to expect every week. Whether or not it was the right decision to switch Jeremy Martin and Christian Craig is still up for debate, but the Martin side didn't pan out. Christian will be good but he has some stiff competition if he wants this title.

The dark horses are going to be fast and furious but I don't know if they will collectively have the consistency to win a title. Adam Cianciarulo, Benny Bloss, RJ Hampshire, Jordon Smith, Colt Nichols, Zach Osborne, and more all have the speed and experience to win but they haven't been able to put a whole series together. Of these, I look for Osborne to be the wild card as he has been training with the Baker crew and should be more prepared than he has ever been.

Steve Matthes: I think the smart money would be on Joey Savatgy as he almost won the 250SX West Region title last year and then there's Christian Craig and Zach Osborne a shade behind Joe-Dog. The complete wild card is Adam Cianciarulo who could come in hot and dominate or he'll be fast and crash.  I'm hearing some very good things about how fast AC is going down in Florida. Alex Martin will be the guy nobody thinks of, but will be solid top-five dude every week. Osborne looks to be transformed physically with Aldon Baker so you know he'll be good. Winning your first 250SX race and the title in the same season isn't unheard of, but it's rare. That's what Wacko Zacho is going for.

Weege: I'm going with Hampshire. He has but one podium in his entire 250SX career, but I think that number is about to go way, way up.

JT: I will say Bloss. I know he has big expectations and he’s on a factory 250F so I think that will help his weight disadvantage. He will be one of, if not the fastest, in the whoops every weekend. If he can figure out the starts, look for him to break out similar to his Unadilla ride.

Matthes: I would say Colt Nichols but I'm not sure how the leg is going into the season. I'll have to hold off on that until I see how good he's going. What about his teammate Dylan Ferrandis, who's always been fast in overseas SX races, but does have a tendency to throw it away? I'm not mad at JT's Benji Bloss pick either, that bike is good and he's been riding well this off-season. Ah screw it, I'll go with Ferrandis as a surprise.

3. OMG Dungey didn't make the podium! Is there a problem???

Weege: I’ve never agreed with the notion that Dungey, “Will take a podium if the win isn’t there.” Dungey tries to win every race he’s in, but sometimes he gets second or third despite his best efforts. I’ve talked to Dungey post-race approximately 17,543 times (because he’s almost always in the top three) and he almost never says he’s okay with a third. Remember last year, at Indianapolis, when he had a huge points lead but fought Ken Roczen tooth and nail for the win on a super rutted, sketchy track? That’s what I’m used to seeing. But this year has been different. I know, he has a giant points lead again so there’s no need for the panic button, but he was much more dominant around this time in 2016. His average qualifying position this year is 6.3, and there have been only two races this year (out of six) where you can argue he was the fastest rider on the track—San Diego and Anaheim 2. Otherwise he’s been good, but others have shined. I think something is just slightly amiss right now, and Dungey actually has had to go into protect mode and try to bang out solid finishes in the meantime. He really is “taking” whatever finish the night serves up. He’s still really good and he’s the points leader, but this isn’t quite 2016 or 2015 Dunge, either.

JT: I am not sure if "problem" is the right word, but I would agree that he isn't on the same razor edge of performance that he was in 2016. He has been solid and has an 18-point lead as evidence, but he hasn't been the outright fastest rider arguably other than Anaheim 2. I am sure he and his crew know more than we do about what's really going on, but as long as no one gets on a huge winning streak, he's fine for now. He will take the wins when the opportunity arises and will settle for good finishes when things aren't clicking. His main competitors haven't been able to sustain any sort of consistency thus far so they haven't put any pressure on Dungey to raise his game. The rest of the field is lucky that Dungey has struggled at times this season, otherwise this would already be a snoozer. Those 18 points could have easily turned into 30 or 35 if Ryan found his stride.

Matthes: No, there's not a "problem" with Dungey. Most people would love to have a "problem" like Dungey has right now. There's just no way Dungey, Roger DeCoster, Baker, Carlos Rivera, or anyone in that camp to say that he's really riding up to his usual standards. If they do, they're lying. Having said that, his points lead is slowly growing so maybe we're all jumping to conclusions here. As I wrote in my Observations column, this weekend is big for Ryan as it's back in his home city and he'll want to come out and dominate in front of all his friends and family. Let's revisit this topic next week, ok?