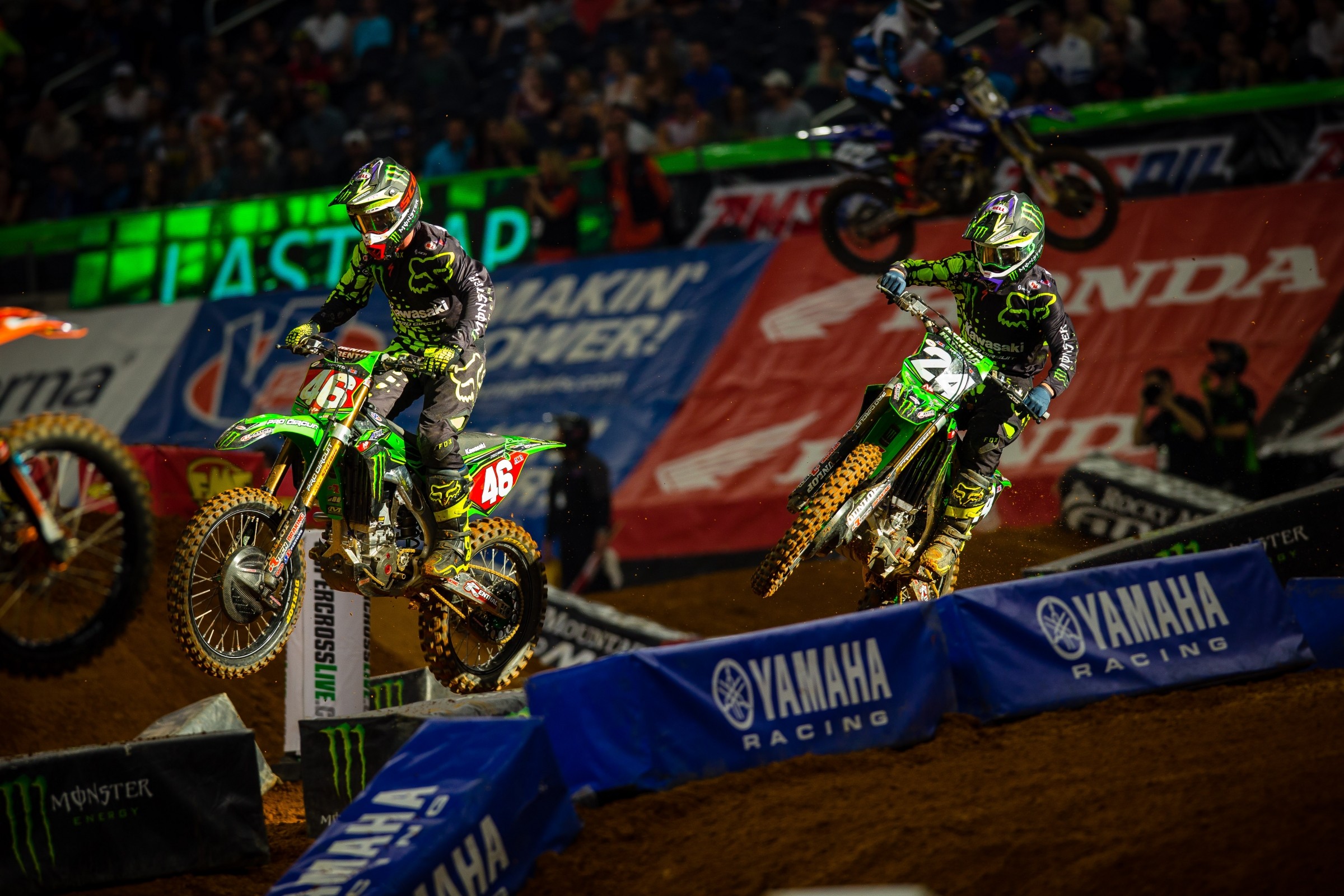 Heartbreaker for Shane McElrath, who appeared to have the Arlington Supercross in hand until he experienced bike problems while leading. This opened the door for second-place Justin Hill, who took the lead and later his fourth-straight 250SX win. His Monster Energy/Pro Circuit Kawasaki teammate Austin Forkner came in behind him for a career-best second. Aaron Plessinger (Yamalube/Star Racing Yamaha) was third after yet another bad start.

The trio talked about it together in the post-race press conference.

Racer X: Justin, four in a row. Great day for you. Fastest in qualifying. The heat race, the main event … it’s tough with you and Shane. I know you guys were friends. You wanted to go head-to-head with him. To see Shane go out like that, I know you want more than that, but still I’m sure you’ll take it.
Justin Hill: Oh, I’ll take it, but yeah, it’s emotional for me. Shane’s a great guy. I don’t want to see him have troubles. It’s a dangerous sport and you have to have confidence in your machine. When you have issues it’s a bummer. I want to race him straight up. I want to try to beat these guys straight up. This is an intense sport that we work hard for. I don’t want to see him rolling on the side of the track. That ain’t fun for nobody. So I’m happy to have a big points lead and get another win. That’s amazing. I put myself in a good position and had to stay away from this guy, which kept me motivated. I’m excited moving forward now. This is great.

Austin Forkner, your second career podium. The only guy in your way all night was your teammate, in the heat race and in the main event. But a good bounce back from Oakland where you went down in the second corner. So you’ve got to feel good to get a second place—your best career finish.
Austin Forkner: Yeah, definitely. I didn’t get a perfect start, still got a pretty good one though. I was just kind of pacing myself off of Justin. Shane was getting away a little bit in the beginning. I was just trying to really pace myself off of those two and try to run with them and not really worry about who was behind me. Then I kind of made a mistake in the whoops and lost a little bit of time. I saw Aaron coming, so I kind of just had to regroup and put on a late race charge. Then Shane ended up making a mistake. I was really just trying to catch Justin and not worry about who was behind me. It was good.

Aaron, I know you wanted to get a better start. You got a bad start. Talk about coming through the pack. How hectic was it?
Aaron Plessinger: It was pretty hectic. I had to go around some hay bales and then get back on the track. I don’t even know how many people I passed but it was a lot. Trying to dodge the carnage. It was just crazy. But I came through and we got third. Happy to be on the box.

We have a long break ahead. This has to be a huge sigh of relief and motivation to go into it. Is there anything you’ve got to work on now? [Can you] Now focus on the outdoors and wait for those last few supercross races or is it just take it as it comes?
Hill: For me, I’ve always kind of struggled when we get to the outdoors. I’ve always been somewhat of a supercross guy. So I’m definitely going to focus on getting a little bit of that speed. I think that helps when we come back, honestly. I don’t want to spend a whole lot of time off supercross. I still have a lot in my game I can work on. You can always be better. I didn’t ride a perfect race tonight; just had good fortune and it went my way. So I have a lot to work on in supercross as well. So I just need to try to find a good mix of both.

Forkner: I’m not touching a bike for at least 10 days. Probably not going to do much in the first little bit. I’ve kind of been dealing with a bit of a back injury. I cased a big quad around Thanksgiving and jammed my back really hard. It was actually pretty bad at the time, but it’s a lot better now. But just want to give it a little bit of time to hopefully get back to 100 percent. Then I’ll probably start riding outdoors and then a couple weeks before we go race supercross again get back on supercross.

Plessinger: I’m going to go home, probably see some family, and then head back out to California. Probably do some outdoor testing, then a couple weeks before Seattle get back on the supercross grind.

Austin, when you saw Shane go out did you pick up the pace a little bit at the end there? All of a sudden you’re in second rather than third and you’re looking at the leader in front of you.
Forkner: I didn’t really pick up the pace a lot because of that. After I made that mistake I lost quite a bit of time, so I was just trying to reel Justin back in as much as I could. That would hopefully keep me focused on that instead of focused on not making mistakes and then end up making a stupid mistake. So after I saw him I was just thinking one of the motor guys at Pro Circuit was like, “I want to see you guys go one-two on the podium tonight.” So I don’t know what happened, but after I saw him on the side of the track I was just thinking, man, it could happen. I don’t know how many laps there were left, but I don’t think there was all that many left. So I was like, yeah, it could happen. So I was just trying to catch Justin and just focused on that. I was like, if I can catch him and I can get him, that’d be nice. If not, then second’s good too.

Justin, you’ve been in this position last year where you had a lot of momentum coming in through the year, then you had a mistake. What did you do this time around to kind of slow yourself down and put yourself in this position to be very comfortable going into the break?
Hill: Just using my noggin. I kind of came in with a little bit better of a mentality, a little bit better of an understanding of what I felt that I needed to do. I had a great team behind me coming in. I didn’t have a great setup coming in. I had a broken shoulder literally just a few weeks … I didn’t have a lot of time. But I had a great mentality and I had a lot of drive this year. I wanted to get it done. I wanted to win races. I’m just trying my best.

Have any of you guys entertained the idea of riding a 450 on the opposite coast?
Plessinger: I’d do it, but I don’t know if they’d let me.

Justin, can you explain your hat setup there?
Hill: [Laughs] I’m in Texas, baby. Gas Monkey Garage. I went and visited Gas Monkey when I was here and they gave me a tour of the place. It was real cool. I’m a fan of the show. I went through the gift shop and hooked myself up. The only thing I had to keep warm, so why not?

Aaron, this has been a really difficult year, not exactly where you thought you would be. Is this a pretty good breakthrough to remind yourself, “Hey, I’m still a podium guy who can be at the front?”
Plessinger: Kind of. I’d like to be up on top, but you can’t win everything. It’s been up and down for sure, but more ups than downs thankfully. I know I can be up there, it’s just my starts haven’t been there. Just been at the wrong place at the wrong times. It kind of sucks but got to deal with it.

Justin, for you when you’re out there we see you at the podium. You’ve got most of your family around there with you. What does that mean to you now having four wins in a row having your family with you here at the races?
Hill: Everything. Family for me is everything. I wouldn’t want them to miss a single race, miss a single moment of what we’re doing. It’s always been that way. They’ve helped me through my entire life and given me everything that I needed to do this thing. I just love sharing it with them. It’s just great. I love having Pop around. Even my brother, even though he’s intense sometimes, and Mom and Dad. It’s a great thing. I cherish it.

Technical question for all three of you guys. 110 or 120 [tire size] tonight? The track was a lot different than we saw last weekend at Oakland. Pretty hard, dry, slick. You want to get a bigger print. Who’s running 110s or are all you guys running 120s?
Forkner: I run 120s at every race. I’ve ran 120s for a long time now.

Hill: I ran them too.

Plessinger: I’m actually not sure. I just ride the bike.