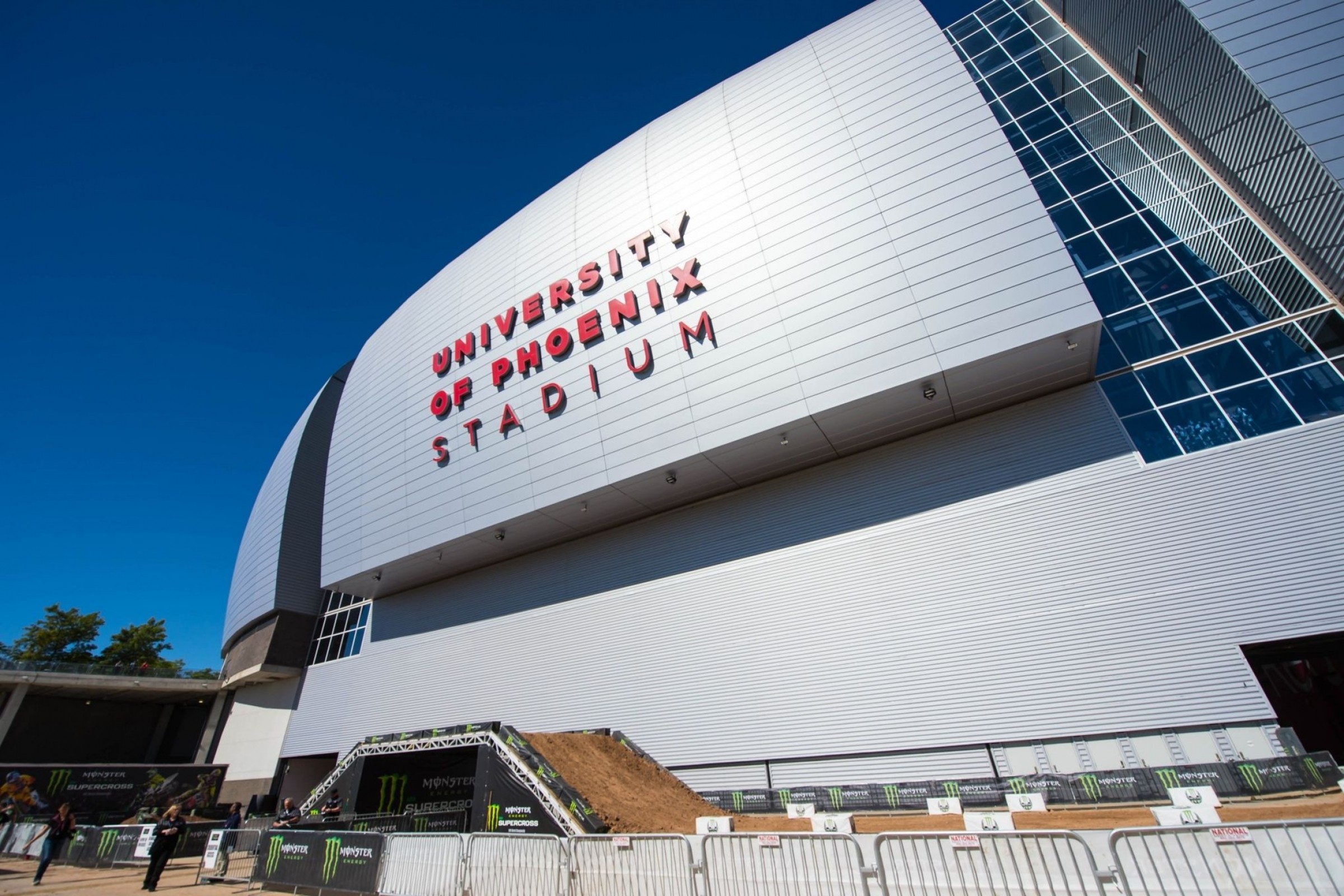 Phoenix! Glendale! Phoenix! I don’t know what to call this round anymore, but it’s still awesome. The move to University of Phoenix Stadium is a bit of a drive, but wow, the stadium is worth it. Home of the Arizona Cardinals, this modern dome is a picture-perfect home for Monster Energy Supercross. The amenities are world class and with more room, the pits are much better than the mess that Chase Field presented. The coolest part of this dome, though, is the rolling turf. The surface of the stadium actually rolls in and out of the dome. This is actually done because the football team wants to play on real grass, since it’s softer. A dome prevents grass from growing, so, voila, a solution was found. During the week, the entire field is rolled out into the sunlight so it can grown, and then it is brought back in for the games on Sunday. It’s a brilliant system. For supercross, they’re able to roll out their nice grass and then put a supercross track in its place. Once the race is finished and the dirt is gone, the floor is cleaned and the grass is rolled back in. An amazing stadium, really.  Oh, and the year round Arizona sun doesn’t hurt either.

Let’s take a look at the track itself, shall we?  (This is where you slowly nod and keep reading.)

This start is loooong. Like, really long. I love the long starts and I also feel they are safer. Some people will correlate higher speeds to being more dangerous, but I don’t see it that way. Longer starts give riders more room to spread out and avoid each other. The shorter starts create a collision almost every time. The long 180-degree turn (another one of my favorites) leads into a tricky rhythm section. The fast line here will most likely be 3-3-3 if all things come out as drawn up. Watch for riders trying to make moves here on the start as tripling will be a judgment call and scary at times. That leads into the first “big” rhythm section I have seen this season. What I mean by that is simple: there are jumps and options that some riders will consider, some will pull the trigger on, and some will consider pure lunacy. Riders like Justin Brayton and Jason Anderson could pull off some silly jump combos here. Look for a 3-4-3-2 or a 3-3-4-2 option. Those are possible but will take some huevos.

The next two sections are a bit boring as the 90-degree turns lead into the standard supercross triples. Ninety-degree turns before big jumps basically negate any passing whatsoever. Following the second triple are some rolling bumps before a triple into a bowl berm. I don’t look for much action in those two straights at all. The only chance is to fly through those rollers on the right side, triple to the inside, and set up a block pass into the next bowl berm.

Coming out of that berm, there are a decent set of whoops that will be dependent on how tough Dirt Wurx chooses to make them. Last year’s were very big and bit more than a few riders. There is no way to predetermine what these whoops will look like, we’ll just have to wait and see. There is a left hand berm back onto the start straightaway which will have riders really opening up the throttle. That berm will slingshot everyone into super-high speeds (supercross relative).

Next up is the under section of an over/under bridge and then it’s straight into the sand. The sand loops around over the bridge and then there’s one final rhythm section before the finish line. I look for it to be a bit one-lined all the way through this section, so if riders don’t make a last lap pass in the whoops, there might not be another chance before the checkers.

Can Marvin Musquin step up to the opportunity?

Will Justin Hill catch fire after his impressive win?

Does Cooper Webb continue his improvement or revert back?

When will Jeremy Martin put it all together?

How long will it take for Mookie to find main event fitness?

Ryan Dungey won his first race of the season and with his rival Ken Roczen out of the series, he’s in a good position to win his third title in a row.

Cole Seely rode really well en route to his first podium of the season. He is HRC’s main focus now.

Justin Hill dominated the main event last weekend and served notice that he’s ready to contend for this title.

Cooper Webb was a different rider at A2 than either of the first two rounds. His aggression and comfort level noticeably improved.

Weston Peick earned his first top five of the season and has been rock solid.

Vince Friese just can’t seem to stay out of trouble. Removing all opinion, his inability to navigate through weekends drama-free is undeniable.

Jeremy Martin hasn’t been able to find any sort of rhythm in the main events this season. Anaheim 2 found him on the ground with his buddy Phil Nicoletti.

Steve Matthes argues that Tupac is still alive, Elvis has indeed not left the building, the government was behind 9/11, we didn’t land on the moon, the Shake Weight is a workout, the CIA killed JFK, aliens landed in Roswell, and the Illuminati are plotting behind the scenes. After some of the ridiculous Vince Friese theories he came up with this week, nothing can be ruled out.

Chad Reed gets into the top five for the first time this season.

Jason Anderson gets his first podium of the season.