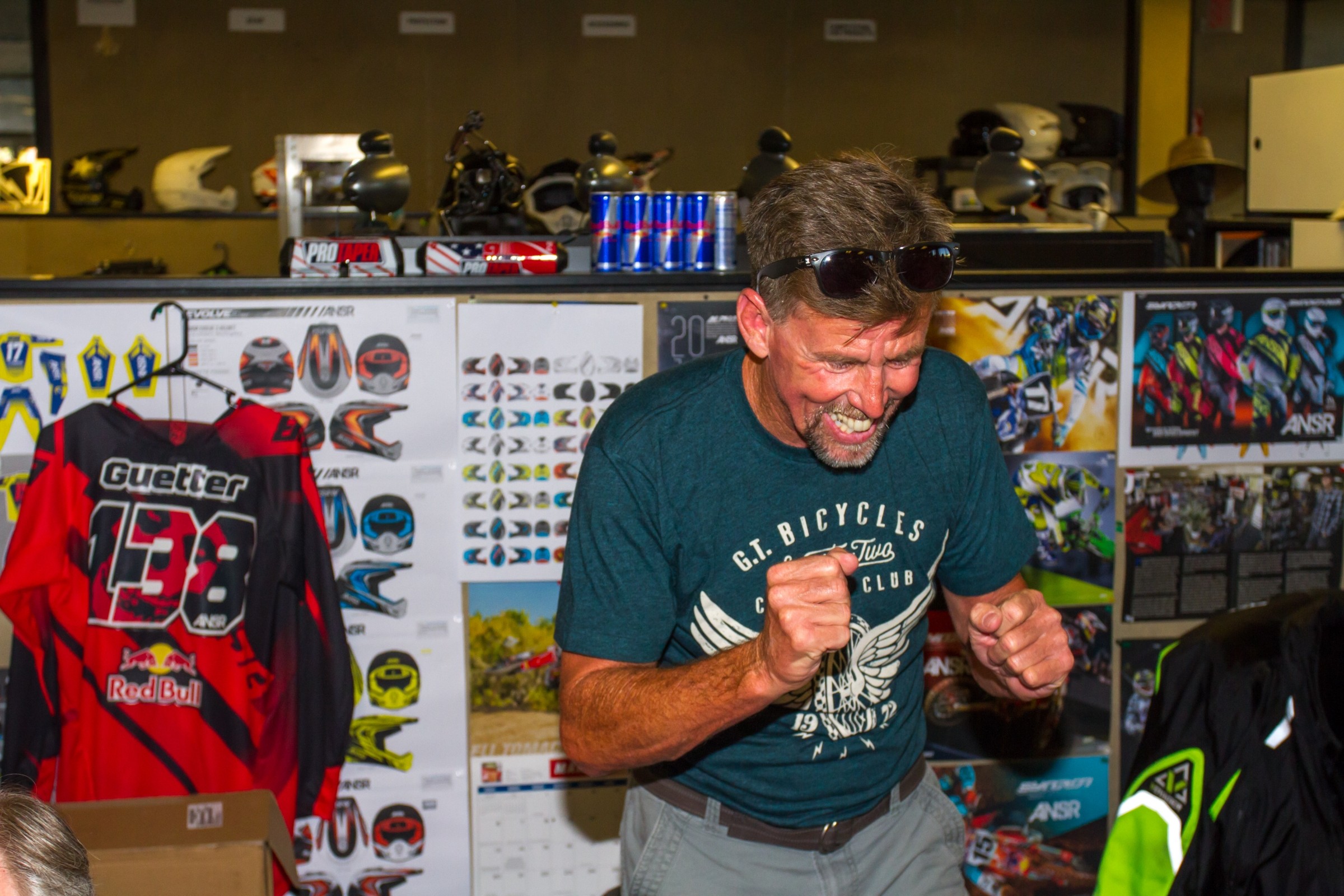 In late summer, we received an invite to a special event inside the ANSR Racing headquarters. Eddie Cole, the company’s founder, was going to be visiting along with his friend … Bob “Hurricane” Hannah.

Pretty amazing that Hannah is not only one of the fastest and most successful American motocross riders of all time—and the first multi-time supercross champion—but is also possibly the most outspoken rider ever. Can you imagine that combo today? Killing them on the track, then crushing them with the mic?

Hannah tells it as he sees it, and that led to some wild moments in the early days of the sport. Bob and Eddie let us turn on the recorder while the old stories started to roll. Here’s the Hurricane on a variety of topics.

Racer X: On those famous lightning bolt graphics…
Bob Hannah: Lighting bolt graphics originally came from a Suzuki shop in Illinois called Mid-West Action Cycle. John was the owner of it and they were into mail orders. They still have it, they moved, but it’s still around. That’s where I got it and then I just started running lighting bolts on everything. Eddie told me that and put it into the seat covers, he put it on everything!

Has Bob been riding lately?
Only on the adventure bike. It’s a Yamaha Super Tenére. It’s 1200cc’s. I was with [Todd] Huffman and his buddies in Moab a few weeks.

Do they camp on these adventure rides?
Yeah at the Hilton or Double Tree! One time we went out six or seven days out to Colorado with tents and sleeping bags, but they never came off the bike. We were in the best hotels we could find [laughs]. We needed, some air conditioning. It was 100 degrees out. If it was nice weather, I’d like it. I like hanging out in a tent but after a 100-degree day you just want to cool off. I did some cycling today and I’m still hot [this was late July].

You do cycling too?
Four days a week. Road biking and mountain biking.

[Note: Bob does a charity ride every year called the Nosco ride on November 3 in Newbury Park, CA. 82 miles and 8200 feet of climbing. The Michael P. Nosco Foundation, Inc. supports our Southern California communities whose mission is to provide financial relief to families and/or individuals who are confronting a life threatening illness. Bob also does some other gravel races on his cross-bike in Idaho.]

On pranks with his friend and rival, Marty Tripes. One time, Honda put Tripes on a diet, so Bob would order pizzas to his room the night before the race to sabotage him!
Tripes was a very good guy, but he could not find a good line between being real competitive and being your friend, because we were friends. So when he wanted to beat me it just didn’t work for him to be too friendly. So he’d try to be tough, you know, and then Honda put him on a diet so we’d buy him food at the track. One day I ordered a pizza delivery to his room the night before the race!

Tripes was a natural talent. If he wanted to win, he could win. It was just keeping him motivated. If he had the motivation that I had, he would have whooped ass. He had too many draws down in San Diego. Drinking, smoking … whatever the hell. That’s another story. There’s Tripes, and somebody’s got a full strawberry pie before the race. Tripes says he’ll eat it. So we get a big bet going. Tripes says he can eat this pie in three minutes. We don’t care if he does it or not. We know he’s going to get sick, so we bet him. He certainly does it, but we’re thinking, that’s bound to make him sick. You can’t eat that whole thing. But he already has a plan. I guess he’s good at this, but he ate it and barfs it right in a pile right there. [Laughs] And then [Doug] Domokos says, “I’ll eat it again for $500!” We go, “No, we’re not going to pay you. You’re not eating that.” Domokos would do anything for money.

On creating trouble and getting fined…
We used to be have a two-minute card before the race. The gate is up, the flag furls up, with two minutes I set this six-foot hoagie sandwich on the front of Tripes’ fender. Now his mechanic really didn’t think that was funny, Mearle wanted to fight me! Can you imagine them doing that now? Could you imagine Bubba putting a six-foot hoagie sandwich on Villopoto’s fender? They kind of got mad at me, but what are they going to do? Another time with two-minutes to go I put a 2x4 through his front wheel. They wanted to fine me for that. They’re always threatening fines. The AMA would fine me for stupid stuff like that. We got into a lot of trouble. They kept fining me for everything. If I don’t show up for the rider’s meetings they’d fine me $100. I said just fine me because I’m not coming by anymore. One time I got a big fine. I broke my leg and then I came back to ride and you’re supposed to have a doctor’s release. Well I didn’t have a doctor’s release so we go to check in the day before the race and they wanted the release. [Mechanic, Keith] McCarty said, “Oh we have it. It’s in the room, we’ll bring it tomorrow.” So McCarty, my mechanic, wants to write this thing. He says, we’re going to write it from Dr. Frankenstein. So we, in our infinite wisdom, re-wrote it from Dr. Jock Strap and that really pissed them off. And they tried to call Dr. Jock Strap in Center Valley, ID, and couldn’t get a hold of him and I never admitted that he wasn’t there, but they fined me a grand anyways. I never got that release, but Dr. Jock Strap said I was the finest specimen that he’d ever seen. Hey if we are writing it, were going to write it the way we want.

Mike Dupree used to run the AMA, really good guy. I was friends with him, but when he needed to do his job seriously he was serious too. You know how they run down the line well to see if everyone is ready? When he’d coming to me I’d do this (giving the bird). Mike would say, ‘You can’t do that!’ So obviously I’d do it every week. They said, ‘We’re fining you for that!’ Oh, go ahead. The AMA tries to fine you for anything. I don’t know if they do that anymore.”

Pranks as the new guy on the team…
When I first started racing I came from the desert and I’d never been on an airplane, I’d never been anywhere. I had been to L.A. a few times, but I was a desert rat. I had no background doing anything. I lived in the desert, rode motorcycles a lot and raced bicycles, but that was it. I didn’t know jack about the real world. I came down to ride and I went on the tour [to the races] the first year. Well there were guys Brian Lunniss, Bill Buchka, a guy named Don Dodeck, Ed Scheidler, probably guys you don’t know, but they were all characters and all veterans. Some of them have a sense of humor that are … well I liked it. Nothing bothered me. They used to do stuff to [Broc] Glover and he’d be crying. People would say, ‘Don’t these guys bother you?’ I’d say, ‘Ah, I don’t care.’ It was brand new to me. So they would torture us. We were always fighting, tearing the crap out of rooms. We’d be fighting and tearing these things off the walls, I’m surprised we didn’t kill each other. The guys are always beating the crap out of me, and I was the punching bag, the new guy. So Danny Turner who was a factory guy then who had just been hired with Rick Burget and myself. So Danny calls me and says, ‘Come next door they’re killing me over here!’ So I go in and the slam the door behind me. All the mechanics were in there. They grab me, they stripped me, put me in a chair, they duct taped me, and then carry me to the elevator at this big hotel, push lobby, and put a sign on me that says ‘Please Help, Naked.’ And then they hit the button and off the elevator goes. Now I’ve got a duct taped mouth, I’m sitting in the chair naked with the sign and I’m not kidding when I got to the lobby it opens up to 50 people. That was just the constant abuse. Some of the riders didn’t like it, I thought it was fun. I came from the desert so I thought, Hey, this is good attention.

The famous Unadilla podium: putting the trophy girl on his shoulders … and then flipping her around.
The owner of Unadilla hired the girl as a friend of the family. So the owner knew that if I won I was going to be nasty up there so he yells up to me while we were up there, ‘Hey she’s only 17. Her birthday isn’t until next month!’ So I go, ‘okay’ and we were nice to her that year. Well he gets her again the next year. So I win again or I’m on the podium for some reason. We’re talking to her, there must have been a thousand people and [Unadilla owner] Ward Robinson’s there. I get up there and yelled, ‘She isn’t 17 anymore!’ and spun her ass around and [Jeff] Ward’s going, ‘Jesus' (shakes head). I have a picture of that. It’s on the the wall. People would walk by and my dad would have to explain it.

Containing his wild riding style…
[Mechanic, Keith] McCarty put some rubber straps through the handlebars and threw rubber straps just above the foot pegs and let everyone see them. ‘What the hell are those straps?’ And Keith says ‘We just tie them on. You don’t tie them on?’ Everyone would have no idea what we were doing. Then McCarty, he goes, ‘Oh yeah, to keep his feet from flying off. He’s been flying off the pegs too much, so we just tie them on!’ They didn’t know what to think!