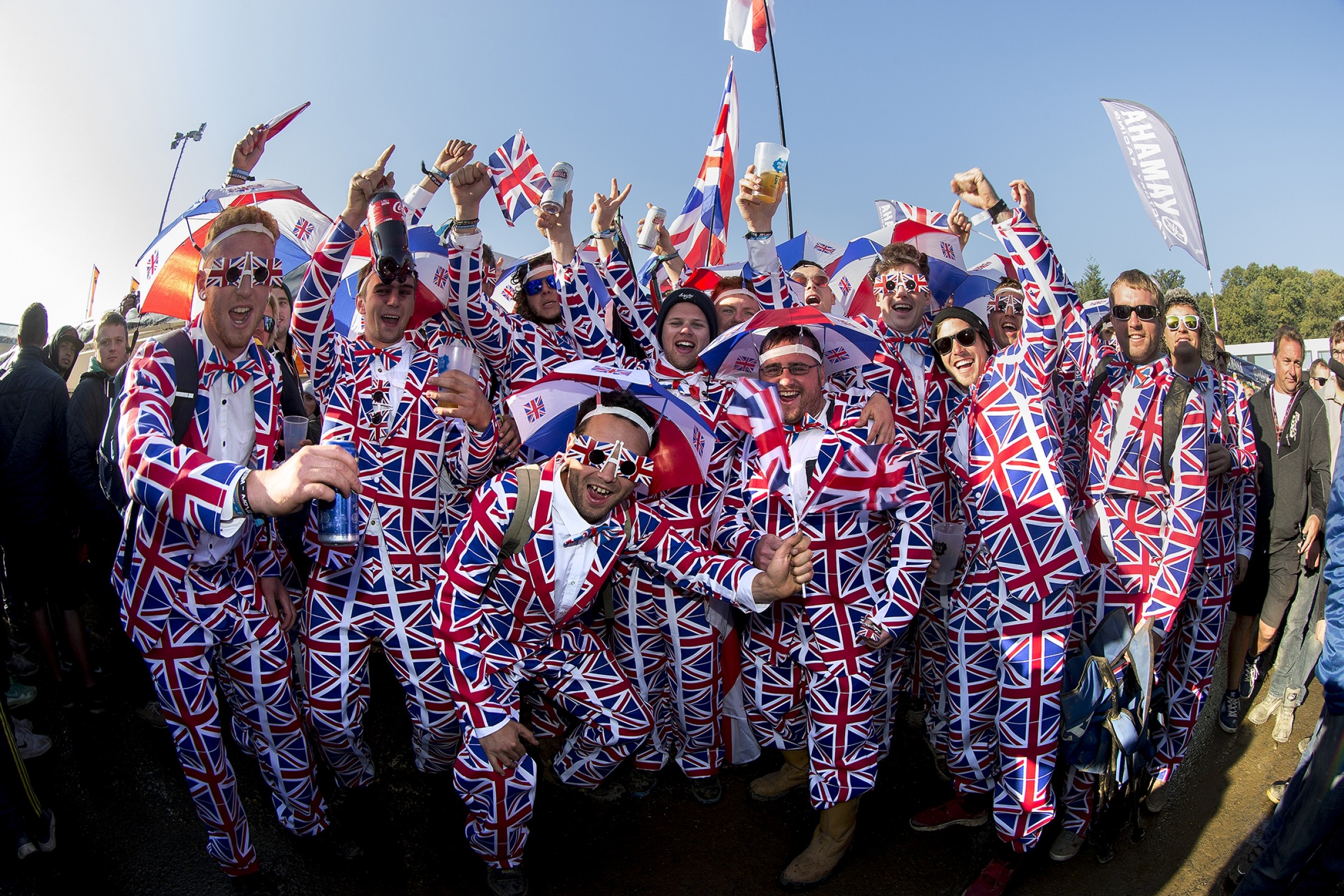 Once a year, Jason Weigandt’s rich old uncle from England, Lord Alfred Weigandt, mails us a missive from across the pond, always timed to match what he believes is the rebuilding of the British Empire (in motocross circles). Read it and enjoy but remember not to take it too seriously—and you can use his 2015 and 2014  letters here to get an idea of what you’re in for. Cheerio!

Oh ‘ello! Lord Alfred Weigandt here firing away at me typewriter and also bombing away with some erasers, for this is the weekend where we finally remove the scars of that terrible day in 1986, when the Septic Yanks won the Supercross des Nations over the mighty Brits in typically cocky, disrespectful fashion. Oh yes, the Americans like to take the piss over Johnny O’Showmara passing King Thorpey whilst riding a 125, but few realize that in those days 125s were actually an advantage, such was the upward march of progress. The fact that Thorpe even hung in there for as long as he did on a 500 was hero work, as only pride allowed him to pilot his big old tank around with anything near the deftness of O’Showmara’s lighter, nimbler machine. Might I add that 1986 was the first year of the ban on works bikes in the States? Honda’s marketing department surely wanted the world to know the production bikes (that you can “buy”, ha as if I believe that) were superior to the works bikes, and so Thorpe’s bike was tuned to 1, while O’Showmara’s was set to 11. Probably found a Japanese flag stuffed in the airbox of Thorpe’s CR500. It’s a rising sun, as long as it’s a production sun. Might I add Thorpey’s brakes went out? Cutting the brake lines—classic sabotage.

Well, a new trap has been set and now we have O’Showmara right where we want him. Along with his teammates Ricky Johnson and David Michel-Bailey, he will be on hand, in person, as a guest of the FIM, to watch the systematic dismantling of Team USA. The last few years of European triumphs have been glorious (much like the last few decades of British Triumphs) but now American royalty will be there to witness the beatings. I suspect the news will travel much faster now. Be it by charter, newsprint or pigeon, I hope the veterans spread the word of defeat back home. It’s unfortunate no one has invented a way for folks around the world to watch the race live yet, but those in Maggiora will know, and they will soon talk.

I believe the word is already spreading. After years of following Ryan Villopoto’s lead (even adopting his first name) Ryan Dungey is taking more literature from Mr. Villopoto’s playbook by skipping the event once again. Villopoto faked injuries for several years at this event, leaving Dungey to fend for himself—unsuccessfully. Now Dungey understands the strategy. First, the German Blitzkrieg blew by him so quickly this season that Dungey sprained his neck trying to get a look! He was so scared, I hear that photos later surfaced of the once-mighty stadiumcross champion cowering over his bike, completely naked! Bollocks! Literally!

The Yanks could have looked to Villopoto but he is now both serving donuts and sitting on one, since the GP elite spanked his backside so hard last year that he ended up with a broken tailbone. With that tailbone tucked between his legs, he’s gone home to Washington (I hate that name) King George III State to sell tea. Well, a tea party it will not be because the Americans will have taxation without Villopoto’s representation—via a tax on their reputation, witnessed by three current riders and the three former so-called legends.

Who is left? I made an error last year assuming it was one Guy “Airtime” Cooper racing for Team USA, it was actually a young lad named Cooper Webb. But the only “airtime” he got was flailing on live TV against Romain “Empire” Febvre. And with Malin making the call! Bloody great!

We know helmet technology has evolved since me day donning the leather types, and apparently that makes it harder for the lessons to sink into the mind of young Webb. Someone told me the lad was trying to take the piss out on Marvin Musquin during last summer’s American 250 motocross tangle. Jeremy Alex Martin and Musquin were trying for a fair fight and then Webb became the spanner in the works, making it a three-way, or as they say in France….well, you know. Anyway, Webb attempted to stop Musquin and when that failed the AMA snipped some wires from poor Marvin’s bike before the finale. Marvin was left with a bitter taste in his mouth, but he chased it at des Nations via fine French cuisine: a cold dish (probably snails) called revenge. Best paired with a nice bottle of French champagne!

Jeremy Alex Martin knows the taste well. This will be his third tour for the Yanks, and he’s watched the French revolution up close. In his first year, he tried to kick his own arse and broke his foot. Last year Bib Musquin spanked him. This year, the MX2 charter plots a course to Mad Max, Fury Road, as Max Anstie prepares to lay waste to Italy (before eventually turning the nation into an allied power).

Indeed, the seas are parting for Mr. Anstie, who once occupied the same Sun Racing Yamaha seat Mr. Martin enjoys now. Bad foreign policy, President Bobby Reagan. Remember what I said about revenge being served cold? Anstie will want this one to sting, so expect the man on the vanilla-coulored machine to be calling for ice, ice baby to make sure it does!

Many things are lining up well for Anstie’s squad. We know that once the wind is in the Searles, there’s no stopping this ship. Thankfully that boat will no longer be anchored by stadiumcross victim Dean Wilson, the Scottsman who just needs to come home. Poor Dean, torn to shreds in stadiumcross, and now he will be off the Brit team when it finally wins again.

The French have a formidable team as well, although I question leaving off Bib Musquin. Poor Marvin always has the bad luck, from AMA sabotage, to having James Stewart tag-team with Dungey to ensure he didn’t win the Atlanta Stadiumcross. That was a double-team effort more of the likes of Davey Boy Smith and the Dynamite Kid, AKA the British Bulldogs. Poor Marvin. Dylan Ferrandis, he of the hairstyle lifted straight from me mates the Rolling Stones, was in the tiddler spot until he was injured. For Dylan, the mere thought of racing stadiumcross with Sun Racing Yamaha in 2017 resulted in a setback. Now they have Patch Benoit in that spot, a man whom I know nothing about. No matter. They have Febvre set to prove Romain noodles can indeed boil in the land of pasta. Oh, and there’s yet another alumnus of the Sun Racing Yamaha program, Paulin Gautier, who is as much of a gamer at this race as Malin himself.

Injuries abound. The Belgians took a hit when the MX Panda was hurt at the stadiumcross GP closer at Carlsbad last weekend. Ugh, reminds me of Malherbe hitting a fence! Luckily Davey Strijbos can utilize his veteran experience to try to keep the Belgians in it. Still surprised no one realizes that when Davey was racing the Nations at Maggiora in 1986, he was doing it for the Netherlands. Not sure how all those rules work, but these memories do remind me of something I had never thought of before:

Bad luck just keeps besetting the teams that can take down the yanks, however, there is one brigade that has me very “high” on their chances (for medicinal purposes only, of course.)

“The Bullet” Herlings is now done sweeping up California (he, unlike the poor man’s Beatles known as The Beach Boys, no longer has to wish they all could be California Girls, he probably made his and their dreams come true during a championship celebration!). Herlings handled Mr. Webb handily in Queen Charlotte’s City in the first moto, and I suspect also in the second although by then I had settled into for a long winter’s nap, time zones and me bad night vision working against me. Herling’s 125cc dominance complete, he leaps to the big class this weekend. Expect the Dutchman to “smoke them” in a way much different from what they do in Amsterdam. Forget the California girls, the dykes will burst in Holland when another championship celebration for Herlings unfurls! Alongside Herlings, Glen Goldenhoff might be wearing some gold this weekend. The Brits are me favourites in more ways than one, but, to be blunt, I fully recognise that the Dutch might roll up something special this weekend.

The Yanks? They’re so desperate that they’ve brought in a complete unknown named Jason Anderson to fill the Open spot. A glance at U.S. motocross standings shows Anderson in 14th place. Fourteenth! That’s the best this team can do? I suspect Anderson will be tucking his untucked jersey between his legs and running home.

Americans would wish to have Ellis Tomac on the squad but he finally parked his mountain bike. Too much gamesmanship at work here. First, the Europeans laid low at the USGPs, lulling Tomac into a false sense of confidence. Tomac then realized the trap was set so he upped the ante by choosing not to race this event at all. No matter, the MXGP’s best can play at that game, and now Tim Gajser is out for the weekend. It’s a standoff of sit downs and Tiga is the last man standing!

So now it’s Jeremy Alex Martin going for the three-defeat, “Airtime” Cooper getting blown away by a Dutch windmill and the Son of Ander realizing that the Son of Simp is his daddy. Most of all, I finally won’t have to rely on my selective and slipping memory any longer. This weekend, will finally witness the eight-sixing of the memories of ’86!