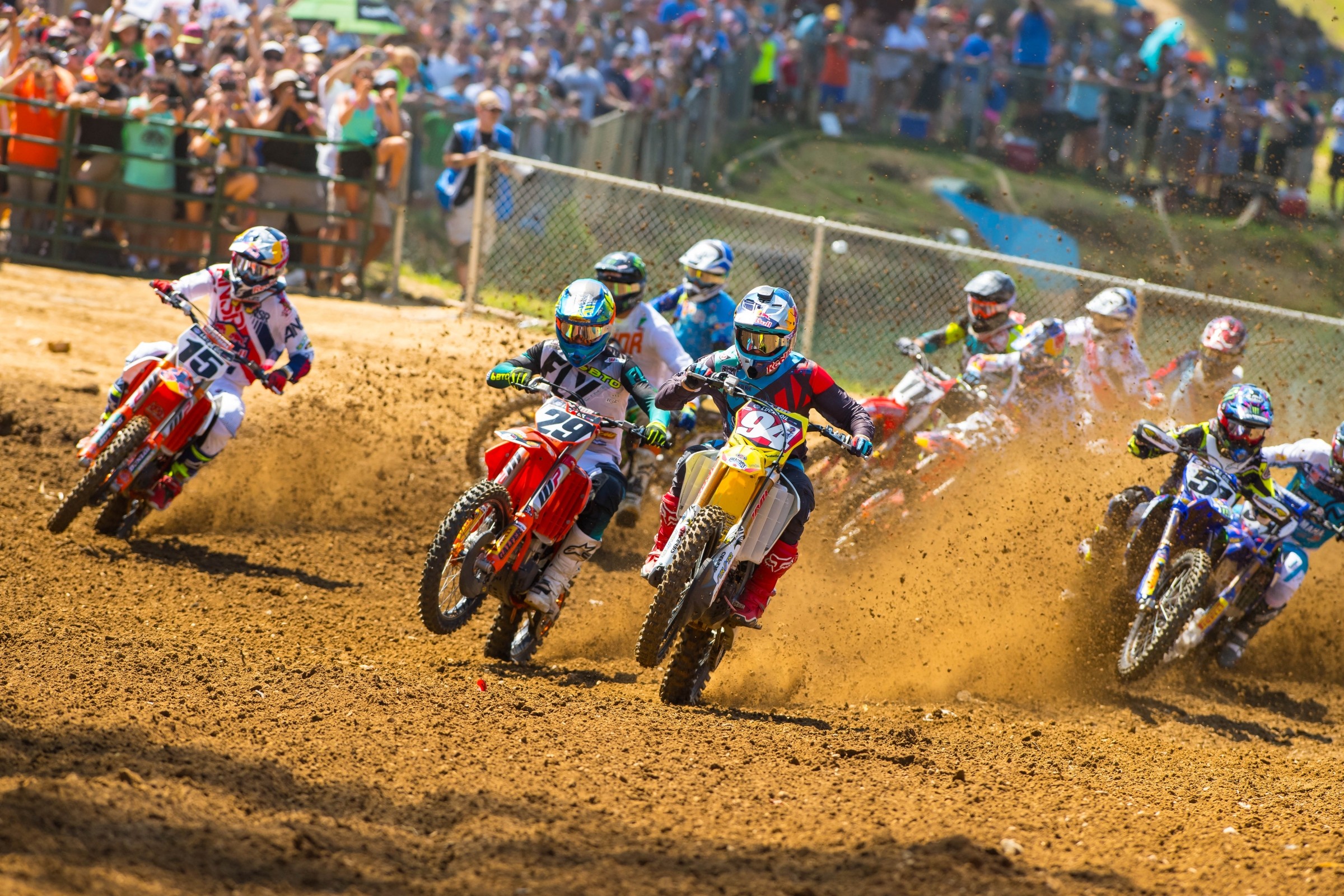 Welcome to the Motorcycle Superstore Race Day Feed where we will be updating you with moto by moto recaps, results and more from Round 11 of Lucas Oil Pro Motocross at Budds Creek.

The second moto was pretty much a carbon copy of moto one for Roczen. Veteran Andrew Short grabbed the second moto holeshot ahead of Roczen but the lead didn’t last long as Roczen quickly made the pass to take the lead. He never looked back and ran away to a 20 second victory.

Eli Tomac was sixth after the first lap, but made his way into second by lap four after a hard battle with Justin Barica. He would finish the moto second and fourth overall. Barcia finished third, which was good enough for second overall ahead of Marvin Musquin.

After getting pinched off the start, Webb powered back from 28th to pass early race leader Adam Cianciarulo late in the race for third, giving him fifth overall on the day.

The early story revolved around rookie Austin Forkner, who was blazing fast and passed AC and Zach Osborne to take the early lead. Osborne, who picked up his first career moto win at High Point earlier this year, was up for the challenge though and bounced back to reclaim the lead. He opened a gap late and won his second career moto by just over seven seconds. Behind a fourth in the first moto, Osborne won the overall as well—the first of his career.

Forkner held on for second over Webb. Cianciarulo finished fifth, one spot behind moto one winner Alex Martin.

Eli Tomac rebounded from an early crash to finish sixth and push the 450 championship to at least one more moto.

The moto winner was never in question. Ken Roczen took the early lead in the first 450 moto and ran out to a 16 second win over Marvin Musquin. Roczen has now won an incredible 17 motos (of 21) on the season and is just one moto away from clinching a second 450 title.

Barica’s JGR Yamaha teammate Phil Nicoletti finished fourth. Dean Wilson passed Andrew Short late in the moto for fifth to rob the veteran of a season-high finish. Short was also falter to Tomac late in the moto. Fredrik Noren took eighth and was followed by Matt Bisceglia and Anthony Rodriguez, who has been impressive in his move to the 450 Class.

Quick Notes
- Weston Peick suffered from a mechanical (appeared to be a clutch problem) in the moto.

- Justin Starling made his 2016 Pro Motocross debut and finished 22nd.

Cooper Webb will have to wait at least another moto to clinch his first 250 title. The 250 points leader had to work hard just to get inside the top ten after going down off the start and beginning the moto nearly dead last. Webb eventually worked all the way back to an impressive sixth, but it wasn’t enough to clinch the title.

Adam Cianciarulo has led his share of laps in 2016—fourteen coming into the weekend—but he’s yet to close the door on a moto win. Early in the 250 moto at Budds Creek, AC was in complete control, opening a five second lead on Alex Martin, who won his first career moto here a year ago. But around the seventh lap, AC lost the front end in a corner, giving away the lead to AMart.

AC wasn’t done fighting though, and actually closed to the rear-wheel of Martin. But after closing the gap to less than a second, Cianciarulo fell off the pace in the latter stages and finished 6.2 seconds behind Martin.

Quick Notes:
- Both Jordon Smith and RJ Hampshire had mechanical problems and were forced out of the moto early.

- Chris Alldredge finished 12th in his first moto back from a fractured pelvis.

Justin Barcia, who won the overall here a year ago, was third fastest followed by Marvin Musquin and Phil Nicoletti.

Zach Osborne, who is looking to rebound for a rough couple weeks, was fourth fastest, followed by Alex Martin.

Welcome to Round 11 of the Lucas Oil Pro Motocross Championship at Budds Creek just outside our nation’s capitol in Mechanicsville, Maryland. Today will be the twenty-sixth time the venue has hosted a round of AMA Motocross, and it will surely mark a special chapter in the tracks history.

Nearly ten years ago, Budds Creek hosted the Motocross of Nations, the first time the race was held in the United States since Unadilla in 1987. The 2007 edition saw Ryan Villopoto sprint into MXoN lore with a dominating 1-1 performance on his 250F, and also the end of the legendary Ricky Carmichael’s professional career. If all things go as expected, we will see more history today, with two championships  expected to be clinched a round early, as both Ken Roczen (450) and Cooper Webb (250) enter with huge leads. We’ve outlined what each need to do to clinch earlier this week, but we’ll include it here as well:

Roczen
Roczen is up 63 points on Eli Tomac and holds the tiebreaker (16 moto wins of 20) no matter what happens the last four motos. With only 50 points available after this weekend, all Roczen has to do is not lose 13 points on the day. Considering his worst finish this year in a moto is fourth, look for the championship to be on ice after today.

Webb
Webb enters 81 points clear of Joey Savatgy and Alex Martin, who are both tied at 341 points for second. The tiebreaker belongs to Webb for now (8 moto wins), but he could lose it to Savatgy (5 moto wins). So, if Webb loses no more than thirty points this weekend, he’s the champion.

In other news, Monster Energy/Pro Circuit Kawasaki will get Chris Alldredge back for the first time since the Monster Energy Supercross finale in Las Vegas. The second-year pro fractured his pelvis in Vegas and has missed the first ten rounds of the Nationals.

BTOSports.com-KTM-WPS will be without Justin Brayton due to his crash from Washougal. James Stewart’s season, and maybe his time with Yoshimura Suzuki, has come to an end. A nagging shoulder injury will keep him out of the final two rounds. For more on who’s in and who’s out, check out our Injury Report.

Please note: In order to watch a live stream of an NBCSN broadcast, you have to verify your cable provider.