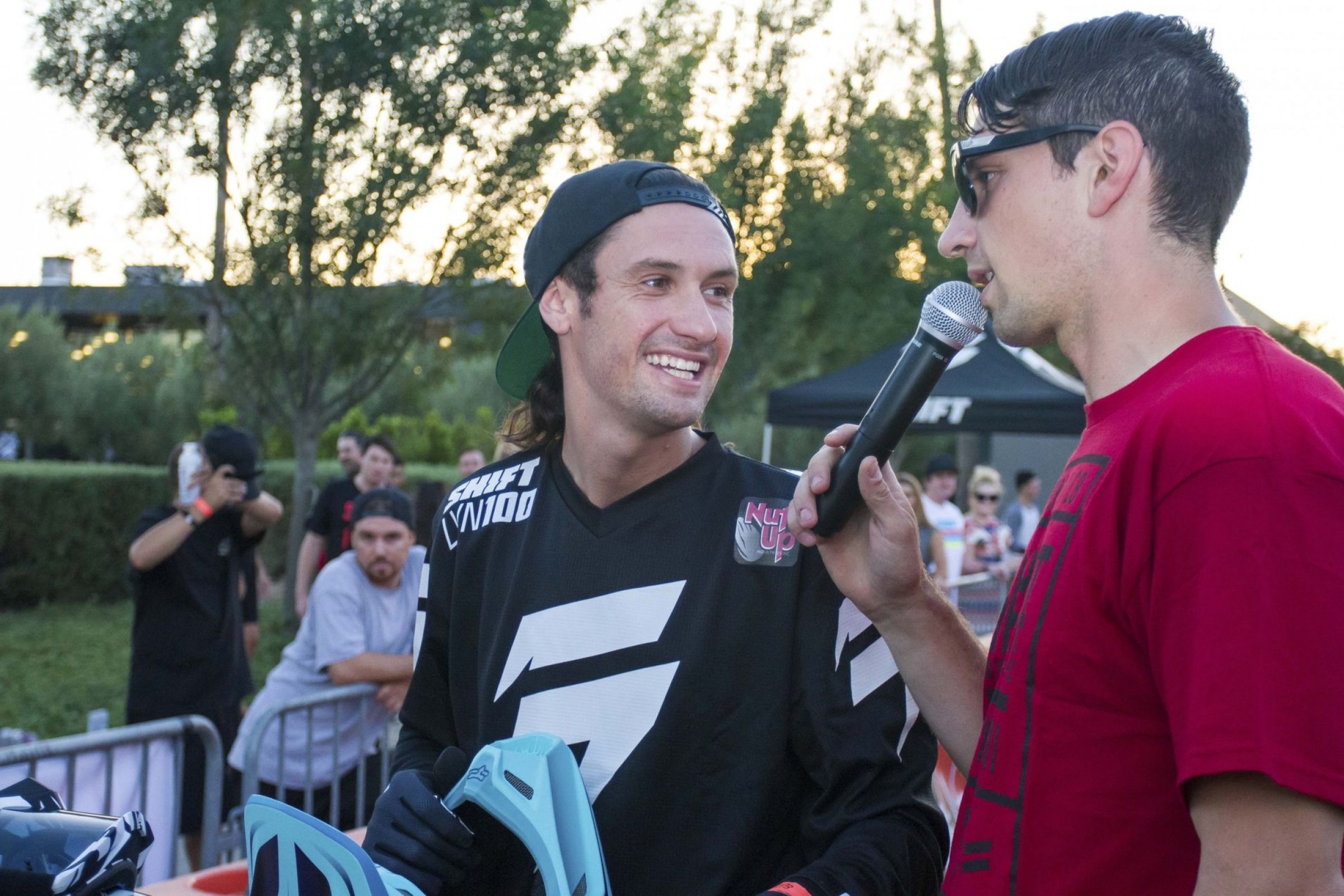 Josh Hansen has had a bit of a tough year. He wasn’t able to get a plan in place for Monster Energy Supercross, he left the UK Arenacross series early, he was in a car accident days before X Games, and he had bike problems at the 125 Dream Race.

One thing that does seem to be working out is being a dad. The look on Josh’s face in the image below is priceless. We recently spent a few minutes with Josh at the 2017 Shift intro getting brought up to speed with the year and what is in the works for next year.

Racer X: I saw you practice at the 125 Dream Race at Washougal, but had a DNS. What happened?
Josh Hansen: The two-stroke I borrowed from a fan, it lasted like four laps. I didn’t get to do it, but it was still fun.

What else is new?
I’m up there [Washington] filming right now and I flew back here to do this 100 Invitational start holeshot. It actually went really good here at Fox/Shift Headquarters.

Do you have a video coming together?
No, I’m just doing some personal stuff. Nothing that’s come together yet. I’m just building up a bunch of footage. I’ve got some stuff I’m kind of working on. I’ve got some ideas in my head that I’d really like to drop that could be really, really big but I feel I need to structure it a little bit more and kind of figure out some things.

Where did the idea for the Holeshot 100 come from?
I don’t know, I kind of just thought about having my dad being on the holeshot. Holeshot Hansen, it just kind of made sense. Some of my friends that I have are not very good on motorcycles and can’t really ride tracks so I was trying to think of something that they could do and have fun and be able to race, but not really get them hurt. So that’s where the start thing came in. It’s super mellow and everybody can be pretty even at it.

What are you filming up in Washington?
Just filming just personal stuff, just out in the dunes and stuff. Just getting some riding in. I had kind of a crappy summer. I got in that car crash, that head-on collision which I wasn’t able to do X Games. Supercross got screwed up this year to not be able to race, so I’m trying to finish out this year doing some fun stuff, some cool stuff. Hopefully get back into racing soon.

I heard about the car accident. What ended up happening with that? Did you break anything?
No, I got really lucky. It was just more nerve damage and stuff. It was crazy. No bones or anything but I felt like it was almost worse because of all my nerves and stuff being jacked up.

Are you still feeling the effects of that?
I’ve been a lot better. I’ve been seeing Dr. G quite a bit, but I definitely feel it, especially [now that] I’m older. I feel like I don’t bounce back as quick. It’s tough.

What nerve damage did you get?
Basically just stuff that just runs up and deep and down into my top of my neck to my lower back.

Do you wake up sore still or after you do something?
Yeah, you get nerves or whatever so sometimes your legs are hurting, certain parts of your body are hurting and you don’t understand why but it stimulates from certain areas of your neck or whatever. So I’ve been working on that and it’s coming around. They’re a lot better now. I just got released to ride. I’ve ridden twice so far since April 2, today being my second day.

What was the whole deal with the supercross situation?
Me and Monster, I guess I should say Dirt Shark, I didn’t see eye to eye with them, so we couldn’t get a deal done. I’m not going to go out there and race half ass. It’s been a tough time. It’s tough to be your own team, so if I’m going go out there and I want to do it right or not even be out there at all.

What about with Arenacross? You were over in Europe for a little bit, right?
I did that. I was paid to do some Arenacross. It was fun. It was great racing. It just didn’t work out on the money side. It just kind of came up short on that, so I came back a little bit earlier. All in all, it was awesome over there. The fans are great. It’s just got to make sense.

What was the highlight of going over there?
I like going over there. I would say it’s not only good just to see different countries, but to meet all the people that I probably never would have gotten to meet ever. There are fans that are untapped that love motocross, that love what we’re doing here in America that you would never know without being there.

What would you say was the biggest surprise as far as going over to Europe and the whole moto scene that you weren’t expecting?
How die-hard the fans were. Even in Ireland and little places that you’d think had nothing to do with motocross, they would go so hard for it. People bring in pictures that are blown up from some of my Shift videos, or pictures of people bringing in four people deep. It’s just cool. We got die-hards out here but people respect you a lot more when you go back over there because they don’t get to see you all the time. I definitely took full advantage of being over there to get to meet as many people as possible.

What was your favorite stop that you guys went to?
I can’t even say one stop. I actually enjoyed every time I went out there to race. There isn’t any time that sticks out in my head.

Do you have any plans for next year supercross?
Yeah, I’m trying to put together something for 2017. I would like to be out there and race 450. It just kind of depends if it works out. I want to do it right and do well. If I can’t do it, I’m not out there to get high fives. I do it for myself and the love for it. So if I can make it happen I’ll be out there.