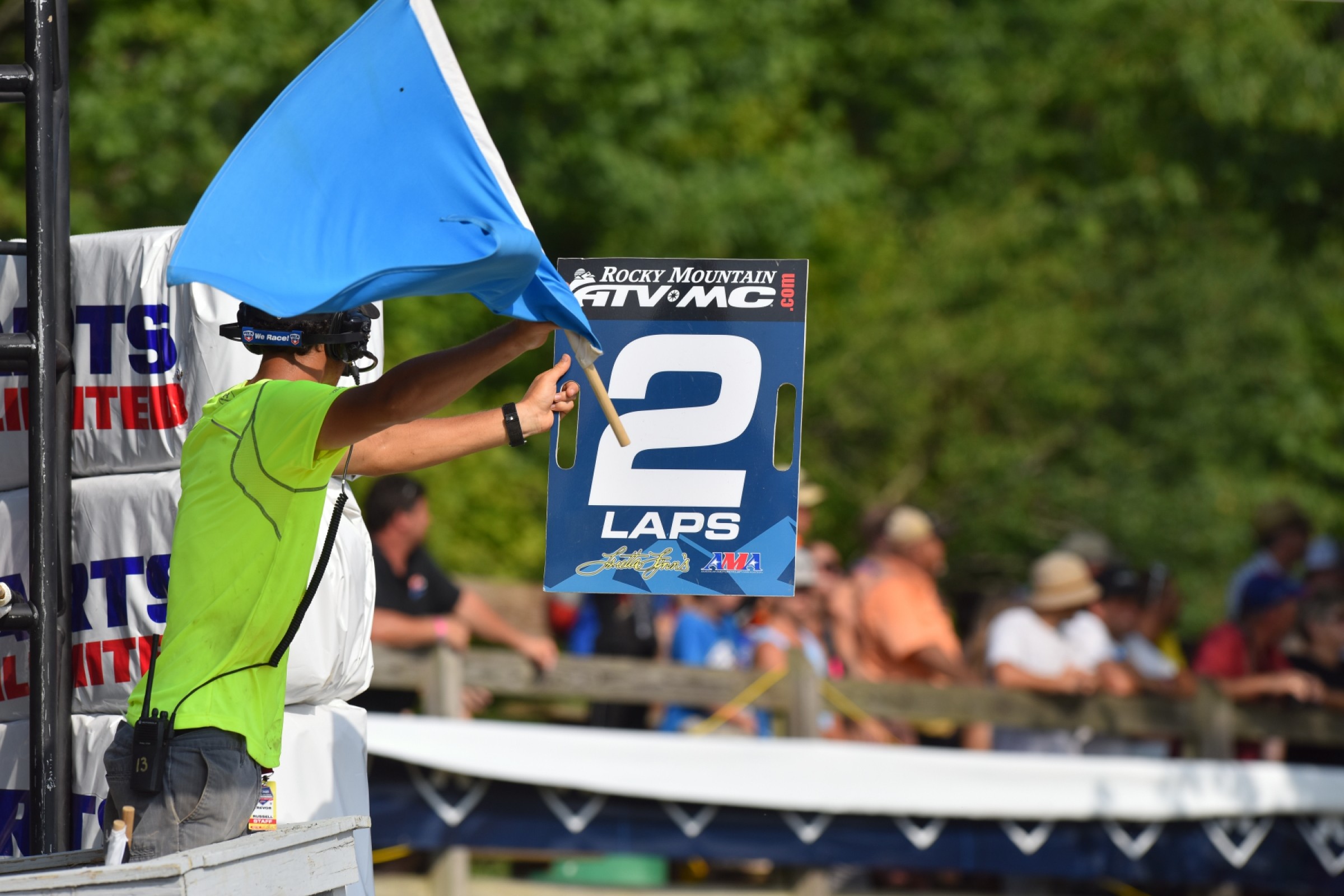 What do you need to know from the Rocky Mountain ATV/MC AMA Amateur National Motocross Championship, presented by AMSOIL, at Loretta Lynn’s Ranch? We’ll provide a brief primer each day.

If you want more, you can check out results here, the full race report here, or watch the motos live at RacerTV.com.

The standard book on Loretta’s is that of the three motos, at least one will be muddy. The summer thunderstorms did not waste any time this year, bombing the track during Monday’s practice, and then hitting again twice on Tuesday morning. The rain was so bad that Tuesday’s first motos, which were supposed to kick off at 7:30 a.m. local, didn’t actually start until 11:30. This did help preserve the track, as it turned out to be surprisingly decent during the first motos in the afternoon. But as the riders started digging down, the ruts and holes got deeper, and the track became super treacherous for the minicycle riders.

It showed massively during a crazy 85cc (9-11) moto. Chance Hymas led on lap one but crashed, so Nick Romano took over and led nearly the whole way, until he crashed when his front end stuck in a sand section. Jett Reynolds, who had already crashed three times, took over the lead. Now, Reynolds, who has swept his two classes for titles here the last three years, is an absolute dynamo and was expected to hold on. Then he crashed on the last lap! Jordan Biese was close to Romano and Reynolds the whole time and grabbed the lead on the last lap to take his first-ever moto win. His dad went nuts and there were tears in the eyes of relatives watching him on the podium.

Dramatic moment in 85cc (9-11) when @jordanbiese28 crossed the line first ahead of @jettreynolds79 and @nickromano411 but didn't get the checkered flag, so he did a whole extra lap before he got to celebrate with his dad! @lorettalynnmx @promotocross @racertv #motocross #dirtbike #LLMX #moto #ThisIsMoto @dcracerx pic

Austin Stroupe is back at the ranch for the first time since 2007, now making a comeback in life and racing after yet another brush with addiction caused another comeback to go south in Amsoil Arenacross earlier this year. So far, this comeback is going well. Austin looks happy and healthy and—as fate would have it—drew the number-one gate pick at random for his muddy 25+ moto. He had the lead by the end of lap one and was gone, going on to an easy win.

Another former Loretta’s star was back at the ranch, although not racing. Mike Alessi and his dad Tony, the folks who playbooked perhaps the most infamous amateur racing program ever, now have new projects. Mike trains at Club MX in South Carolina, and convinced his dad to give some fast kids a look with the SmarTop/MotoConcepts team. With the help of MotoConcepts, Cameron McAdoo has become a dark horse in the loaded Open Pro Sport class. A week before the race, McAdoo crashed hard, dislocating his shoulder, cracking his humerous, and breaking ribs. Last Thursday, he was ready to drop out of the race. Yet, with a lot of therapy and even more grit, McAdoo toughed out a solid second in his moto to stay in title contention. Everyone around him praised his toughness and desire.

Tony Alessi had another point to make, though. In an interview in the announcer’s tower on Monday, he praised the riding facilities such as Club MX and the rest, which didn’t exist when Mike was coming up. Tony said that removing dads as the primary coaches and trainers would probably, “help all the dads go less crazy.” He recommends that to all future mini-dads—and if Tony is saying backing off is a good thing, well, then that’s probably a good thing.

Two things are happening at once in this sport. Teams are rushing to sign up amateurs to guaranteed pro deals earlier than ever. It’s an arms race where if one team doesn’t do it, another one will. At the same time, the pro level has seen plenty of riders who didn’t dominate as amateurs go on to great success as pros, including the current 250 and 450 National Motocross Champions, Jeremy Martin and Ryan Dungey, who have one Loretta’s title between them. Or Malcolm Stewart, who has been here at the Ranch shaking hands and greeting friends and fans, now carrying a 250SX East Region Supercross title. Malcolm never won a title at Loretta’s.

Granted, there are plenty of riders who were fast as kids that stayed that way—Eli Tomac, for example, was pretty darned good at every age and every level, including right now. But there’s something to be said for the riders who found their footing later. Jeremy McGrath stopped by the announcer’s tower to talk Team Green. While watching Lance Kobusch go on to dominate the Supermini class, McGrath realized that he had only started riding dirt bikes at the age Kobusch is now. Then the King of Supercross talked about how, coming from California, he was “terrible” at this track with all of its ruts and bumps. In 1990, right after Loretta’s, he was contacted by folks from Honda for a ride on what would turn out to be Mitch Payton’s first year of the Peak Pro Circuit Honda team. McGrath said he was “sucking so bad all week at Loretta’s” that he literally thought the phone call was a joke and considered not calling back. Turns out he was okay.

The cool thing about amateur racing is that crazy stuff happens that you don’t always see in the pros. In 250B, which is always hotly contested, Mitchell Falk rose to the top of the heap with a good start and a big lead. The race completely looked like his until he got bucked off of his TLD KTM in a sand section, saying “I have short legs so it’s hard to save it when that happens.” But at least he recovered for a podium, which was better than Team Green’s Garett Marchbanks, who was probably the highest-profile B rider coming into the week. Marchbanks got into a pileup early and his bike was locked with another, he was last on the first lap, and had more trouble coming through. He ended up a lowly twenty-first. Jordan Bailey took the win by being the most consistent of the group.

The Women’s All-Star class featured Hannah Hodges, who has made her much anticipated move to big bikes this year. Hodges led early with Brandy Richards right behind applying pressure. Then a lapper swerved across Hodges’ line, and Hodges got plowed into the bales in front of the mechanic’s area. Richards went on to take the win.

The 25+ class has become “the” age class these days now that the 30+ and 45+ divisions now run a Sportsman designation—which means riders that have qualified for a supercross or national as a pro aren’t allowed to race. So that puts riders like Robbie Reynard and Michael Byrne in the 25+ division even though they’re much older.

Stroupe won the 25+ moto, but Reynard stole some attention for riding a YZ125 in a class that allows 450s. And Reynard isn’t a flyweight! Off the start, he was simply buried so he decided to just let the pack go and “save some tear offs.” Reynard rolled through the first turn in last—standing up in his trademark style—and then simply carved up the field. He finished the moto in third! He’s riding the 125 because “it’s a blast and that’s what it’s all about.”

Open Pro Sport and 250A are probably the most-anticipated classes of the week, and likely the places this year’s AMA Horizon Award winner will come from. Chase Sexton fired an early shot in Open Pro Sport, winning the moto fairly handily while riding his GEICO Honda 250F against a pack of 450s. Sexton said he was pulled off the start immediately and sucked into about midpack, but he calmly rode toward the front while others crashed on the slippery, rutted, chewed up track. Yamaha’s Bradley Taft, expected to be one of Sexton’s main competitors, was leading when Sexton got up to second, but before a battle could materialize, Taft crashed in the Ten Commandments whoop section. Sexton went on to the win.

Since we know everyone loves the two-strokes, shout out to Schoolboy 1 (125cc) moto winner Jalek Swoll on his Husqvarna. No doubt, this was the best sounding class of the day.