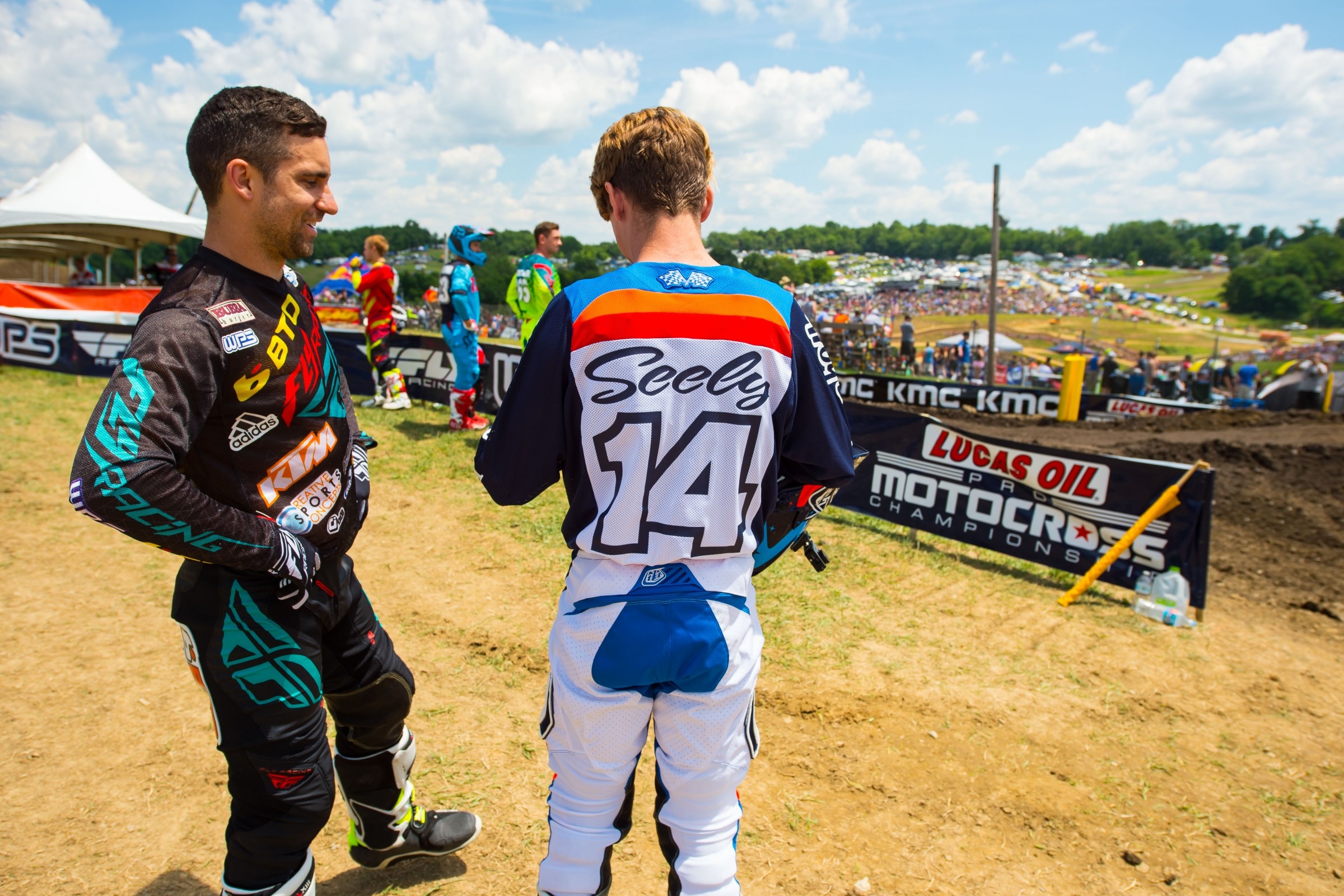 Trey Canard – Back
Comment: Canard crashed while practicing at his track in Oklahoma and now has a bulging disc. He’ll be back as soon as it’s okay for him to go racing, but he’s out for RedBud.

Josh Grant – Ankle
Comment: Josh Grant came into High Point dealing with an ankle injury and then crashed hard in practice. He pulled out of the first moto, and several days later Kawasaki announced he’d miss the remainder of Lucas Oil Pro Motocross. He has now undergone surgery on both ankles.

Ryan Dungey – Neck
Comment: Dungey crashed during the second moto at Thunder Valley and cracked a vertebrae. He’s likely out for the rest of the 2016 season of Lucas Oil Pro Motocross.

Adam Enticknap – Femur
Comment: Enticknap is back on the bike and hopes to race Washougal after breaking his femur during supercross.

Tommy Hahn – Ankle
Comment: Hahn reinjured an ankle originally damaged in supercross. He’s out for the rest of the season, and Cole Martinez will fill in for him.

Cole Seely – Finger
Comment: Seely hit a rock with his pinky finger while practicing. He didn’t crash, his lean angle was just more extreme than a Jeb Corliss flight plan. The injury required surgery and at this time there is no timetable on his return.

James Stewart – Shoulder
Comment: Stewart crashed during the first moto at Hangtown and popped his shoulder out of joint. The team announced that James will remain home in Florida with his wife for the pending birth of his first child. James wrote on Instagram last night that he hopes to return for Southwick.

Dakota Tedder – Shoulder and Knee
Comment: Tedder injured his shoulder and knee in the consolation race (MX’s version of an LCQ) at High Point when a rider behind him looped out and wheelied into the back of him. He hopes to be back for RedBud.

Dean Wilson – Knee
Comment: Wilson is back on the bike after tearing his ACL and meniscus during supercross. When we spoke to him several weeks ago he said he hoped to be back roughly halfway through the Nationals. We’re hearing that could be as early as Spring Creek.

Zach Bell – Collarbone and Infection
Comment: Bell’s recovery was set way back when he contracted a bacterial infection and was forced to undergo a second surgery. He announced on Instagram the infection is gone, but his bone isn’t completely healed. He’s out for all of Lucas Oil Pro Motocross. If you’d like to help Bell financially, please go here.

Tristan Charboneau – Collarbone
Comment: Charboneau broke his collarbone at Glen Helen. He had surgery and hopes to be back for Southwick.

Christian Craig – Leg
Comment: Craig got together with Jordon Smith at Glen Helen and broke his tibia and fibula. He underwent surgery and is back walking. He hopes to be able to race the last couple Nationals if he’s 100 percent.

Justin Hill – Back
Comment: Hill injured his back several weeks ago but is back on the bike. The team hopes he can return to racing in a few rounds.

Michael Leib – Foot/Ankle
Comment: Mid-season during supercross, Leib discovered he’d broken his talus and navicular in January. According to his Instagram page, Leib underwent surgery this week. He wrote: "I've got a long road ahead, but I can't wait to be able to walk normal, be normal and not be in pain 24/7."

Jessy Nelson – MCL/Bone Bruise
Comment: Nelson crashed at Thunder Valley and suffered a grade two sprain of his MCL and a bruised femur. He will try to ride in one to two weeks.