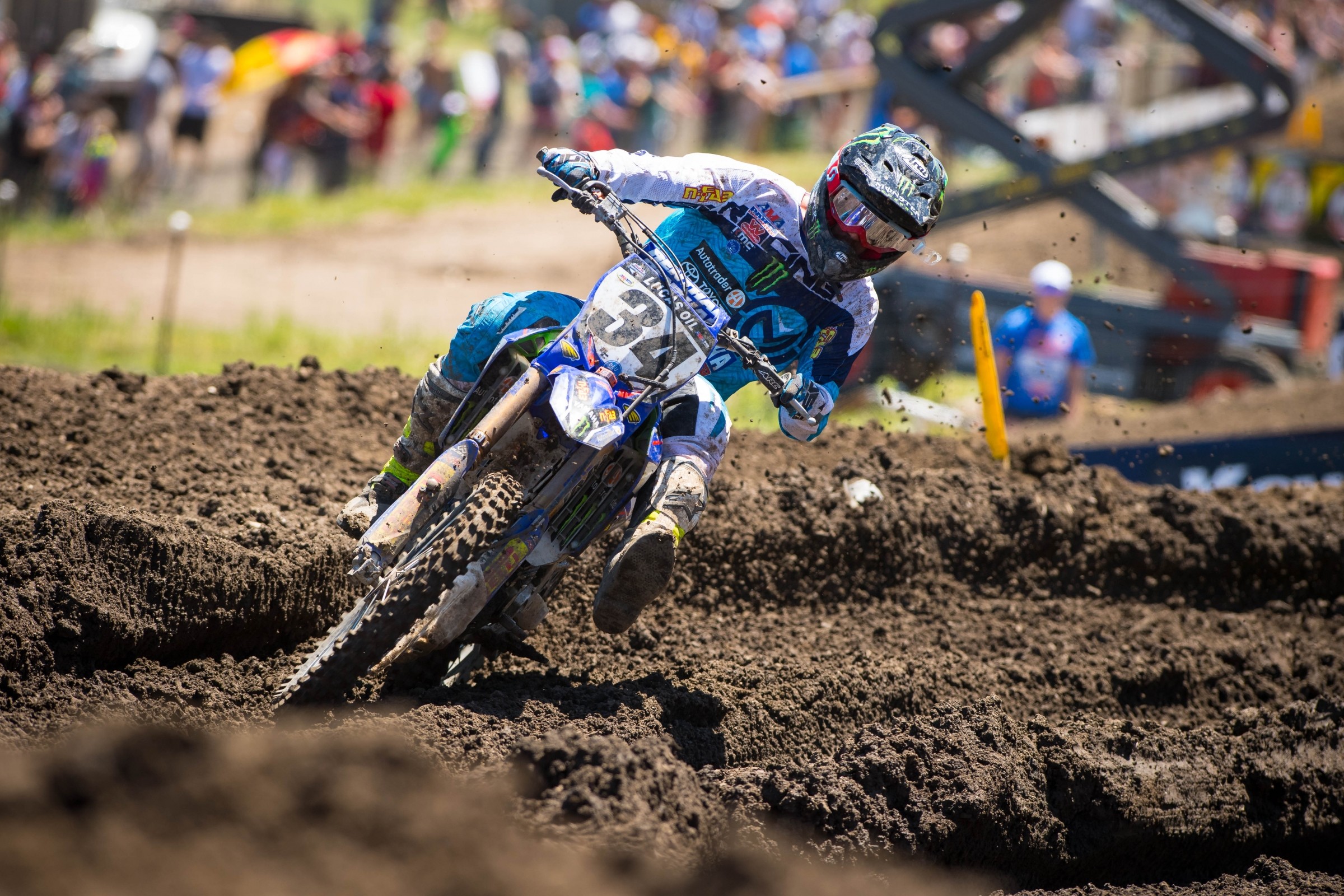 I stopped by the Joe Gibbs Racing MX shop on Tuesday to catch up with the team, and Phil Nicoletti and Weston Peick were talking about their schedule for the week. Phil mentioned going for a 40-minute run on Wednesday morning, and I decided I would tag along. It’s always easier to go for it when someone else is waiting for you to show up, plus, if I could maintain a pace with Phil, I could claim I hung with a professional athlete at something (certainly not at riding a dirt bike).

Along the run, we chatted about a ton of topics, so I decided to recreate that convo and interview Phil when it was over.

Racer X: Okay, Phil, what did you think of the running skills? You impressed?
Phil Nicoletti: Yeah, I actually was. I was expecting you to fade off.

I hung with a professional athlete!
[Laughs] Yeah, but it was just a good, mellow zone one—zone two run.

See that’s the problem. You’re not able to go all out. And I think I’m all strong and stuff.
During the season you have to pick your battles. You’re not redlining all the time. You try to save that for the dirt bike.

But does it happen? You’re one of the few that would be honest enough to tell me if you actually get tired in a race. So tell the truth: are you dying at he end of races?
Absolutely! It’s crazy because it doesn’t feel like… no matter how much you train or how good a shape you’re in, you still get tired on Saturdays. People say that should be your easiest day of the week, which it is, but the intensity, the amount of exertion you put in, you can’t equate that during practice. Then combine that with a race like this weekend at Muddy Creek with the heat and the other riders, it’s ridiculous how tough it is.

Shane McElrath keeps saying it’s a suffer fest. But is it really at this level?
Oh yeah! It’s not an endurance sport but in some sense it is. When you’re at 185 heart rate for thirty minutes and your body is overheating, it gets tough to maintain focus. It is a suffer fest. Who can maintain that threshold and just keep going and keep push for that long?

What about the race, or on Sunday. Do you feel worked?
Oh yeah, you feel fatigued; your body is worked. You can tell when you don’t urinate for five or six hours. We drive up to the race on Fridays and we basically have to stop the truck five times for me to piss. On the way back, we don’t have to stop at all! And I’m drinking the exact same way I was on the drive up! So you’re body is just depleted. It’s pretty amazing when you think about it.

How do you feel between the first and second moto?
You always feel a little bit flat, but thankfully that’s why they have caffeine.

What? Is that trainer recommended?
I think caffeine is an athlete’s biggest friend. I knew that even before I had a trainer. If you’re feeling down, take a gel or a cup of coffee or something and get those cylinders fired back up. On a hot day, you’ll do an ice bath after the first moto and you always feel rejuvenated after that. But it takes about 15 minutes into the second moto until it hits you pretty hard. The fatigue level comes a lot faster in the second moto. I don’t care who you are or how fit you are—you still get tired. I think [Ken] Roczen, I think [Eli] Tomac, those guys still get tired, but those guys are great at pushing past it. And that’s pretty unbelievable.

And as we were talking about earlier, it’s not just a fitness competition, it’s a skill competition, and if a rider has the skill to go fast without burning as much energy, it’s a big factor.
Yeah, there’s a lot that goes into it. If you swap out bad and save it, adrenaline kicks in. Your body has to be able to pump that out. It’s very complicated. Normally you just ride and you don’t think about those things, but lately I’ve been working with Seiji [trainer, Coach Seiji Ishii] and we’re talking about these things. I’m 27 years old now and I’m only starting to learn why certain things happen when they happen.

"If you want to get noticed in this sport it’s good to show some sort of flash of brilliance or speed. I think I’m able to do that, more so outdoors."
- Nicoletti

During a moto, do you sometimes make decisions like, “That inside rut will take more energy than the outside?” Or, “This scrub will take more energy?”
Yeah, but there’s a certain point in time where you’re just brain off and going for it. But at other times you’re tired and you have to make those decisions—but by then it’s too late! There are certain inside ruts that take it out of you, maybe it grabs your foot or stands your bike up. Twenty minutes into the moto, that kills. Or if you crash in the second moto and you have to kick your bike over. When I’m saying that hits you, it hits you! That actually happened to me in the first moto over the weekend. I crashed twice and the second time I had to start the bike.

But you got tenth. You actually got going again.
Yeah I did. I could see the pit board and I guess the guys ahead of me were suffering even more than I was. I was gaining a second or two a lap on them and that helps keep you going. If you get to the point where the next guy is going just as fast as you, and you’re not gaining, it’s hard to keep that pace. Then the guy behind you sticks with you! It’s a lose-lose. Definitely a mental battle.

One thing I respect about you though, is you’re not afraid to get a holeshot and lead. You don’t hide back there. It has to be crazy at the front on the first lap.
Yeah and that’s never been a weak point; I’ve always been able to send it on the first lap or so. For me the toughest part has always been maintaining that for the whole race. We’re getting better; I think this past weekend would have been pretty good. [Cole] Seely was checking out, but I watched the race and it wasn’t like there was a huge freight train behind me. Roczen got by me but I didn’t feel like I was holding everyone up. At the beginning of the year, I was just seventh through tenth; I feel like I’ve gotten better. So I’m looking forward to RedBud.

But I know riders who know they’re the seventh-fastest guy, so they don’t want to get the holeshot and just get passed six times. Even in supercross, you still try to pull the holeshot.
If you want to get noticed in this sport it’s good to show some sort of flash of brilliance or speed. I think I’m able to do that, more so outdoors. Just trying to stay up there longer each time.

So talk about working with Seiji now to try to get that next level.
I actually worked with Seiji back when I was a rookie, but I was too young and dumb to take in what he was saying! And he was pretty new to the sport back then, too. Now that he’s worked with Shorty [Andrew Short] for so many years and now that I’ve gotten older, I think it worked. As far as knowledge and scientific background, Seiji knows all that stuff. If something gets jacked up with my body, I think he can pinpoint it a lot quicker.

It’s not like you weren’t putting in the work before.
Yeah, I believe I always put in work. And when I met Alex [Martin] he really helped me. We worked hard, and Alex is really smart about this stuff; I think he could be a trainer when he’s done racing. So I did the work, but for this it came down to having someone with that extra knowledge and scientific background in my corner. If something goes wrong it’s great to have that.

Speaking of Alex, he’s in Minnesota now. How are you coping without him?
[Laughs] Well, we just spent six months living together in California so I think we’re good. He and Jeremy [Martin, Alex’s younger brother] are basically like my little brothers. I talk to one of them every single day. Then it’s dinner on Friday nights—I guess we don’t have any other friends to hang out with! And we’re always giving each other crap all the time, so it wouldn’t be the same without them. I mean, Alex and I spent years together living together at Club MX, and I’m talking living in the same building. It was probably as big as this conference room, I’m not kidding. And it was just trashed. We were two guys just riding and training everyday, we weren’t making much money…it was stupid, but we didn’t know better! So now things are better and we’re both finally making some money. I would like to go to Minnesota to ride with them this summer. I did it for a month last year, but I also like it here in Charlotte and being with the team. Hopefully next year Alex and I get to be roommates again out in California.

Speaking of Muddy Creek, I remember one year you and Alex leaving together when the race was over, and we were all genuinely worried. You guys were so bummed and depressed—we thought the van was going to end up in up a ditch!
I remember that. It was 2013, we were driving back to Club MX. That was probably a low point in Alex’s career. He had a bad day, and I went 8-DNF. It was almost a suicide trip!

Now look at you guys! Alex is right there!
Yeah and riding with him in California this winter, it’s amazing how much raw speed he has now. To have it not play out in supercross, and then he has another low point in his career, because he finally had a factory ride and he wasn’t getting the results, and then to turn it all around, it’s amazing. It was good for me to get to ride with him preparing for Hangtown and Glen Helen because he was going so fast. And riding with Jeremy, too. They both have some serious skill. So that’s good for me to ride with them.

But now you’re here near the JGR shop.
Yeah, I’m still friends with the guys down at Club MX and I still ride down there sometimes. But being on this team, I was always driving up to the shop here or to the JGR track, and it’s an hour and a half each way. So that was getting kind of old. Plus, now that I’m older, I like the area around here; there’s a lot to do. I love it here.