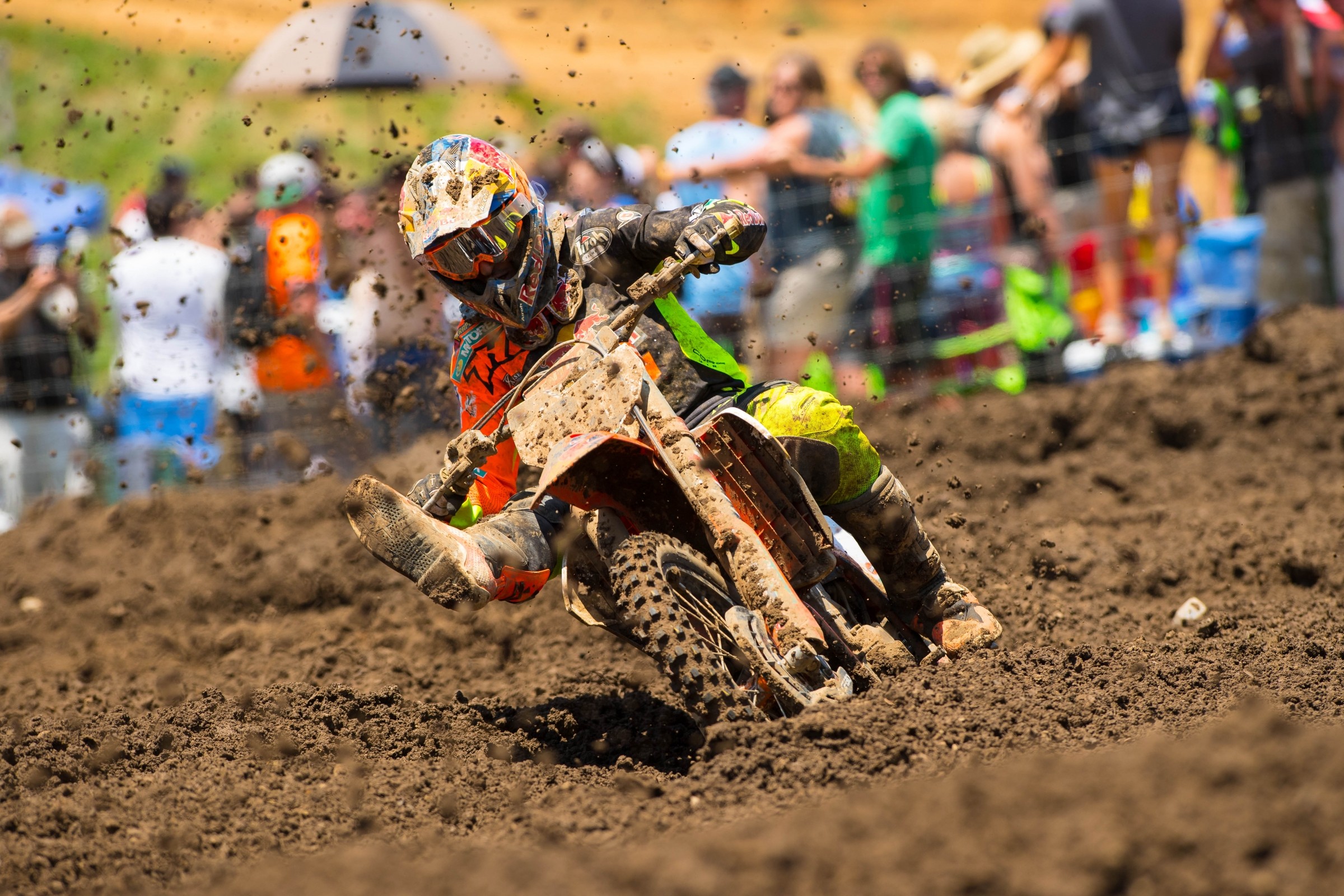 Muddy Creek was the best of times and the worst of times for the riders. The track was super soft and muddy in practice, designed to hold together by the end of a long, dry, hot day in the Tennessee sun. Indeed, by the second motos it was good, but the wet practice left gnarly ruts all over the place, and the changing soil conditions led to great variations in traction—tacky here, slick there. That's where the real skills of the top riders shine.

Former pro Jason Thomas, who has logged plenty of laps at Muddy Creek, grabbed a few photos to illustrate what the pros do to master this track.

This is a great example of how riders, especially on the powerful 450’s, use their body weight to control traction and acceleration. Blake Baggett is exiting a left hand turn that has a slight incline just after the apex. He is leaning very far forward with his upper body to fight any wheelie and also giving him the ability to position his front tire where he chooses. Traction in this turn was extremely high so he didn’t have to worry about the rear tire “stepping out” under hard acceleration. He could stay forward, trust the traction, and apply heavy throttle.

Also, notice how hard to the left he is leaning. That’s a sign of just how good the traction is but also indicates where he wanted to go in the next section of track. The sequence shows how his lean angle and body position can impact his direction. From the first picture to the last, notice how much he has allowed his rear tire to move outside, forcing his front tire back towards the inside, or in this case, to the left where he wants to go.

This appears to be the turn just before the mechanics' area and Blake was bending back hard to take the far left on the next straightaway. There were several ruts down that straight and the far left seemed to be tough to get to. Because it's tougher to get over there, fewer riders will use that line, which means the ruts won’t be as deep. Also, the far left allowed riders to carry more momentum into the right hand turn after the mechanics' area. Speed and momentum are constructed far in advance and this turn is proof of that. Blake wanted to be on the outside of the turn 100 yards after this—but to get there, he had to execute the turn before it just as he did here.

Zach Osborne is coming out of this left hand turn and is just a touch off his mark. Ideally, he would like to have his body weight more on the inside of the seat, allowing him full control of the front tire and full acceleration down the next hill. He is on the outside of the seat here with his inside leg sticking out, fighting the outward push that momentum is causing. His weight on the outside will give him the ability to push inwards on the bike and his inside leg is adding weight back towards the inside. He missed his line just a touch and is doing everything he can to get his front tire turning back inside without letting off the throttle. Sure, he could let off the gas and simply turn inside but in pro racing at this level, letting off the throttle is always the last resort. Instead, he is using every trick in the book to control his direction while also correcting his form mid-turn.

In the first photo, you can see his front tire is pointed towards the outside of the turn, pushing towards the edge of the track. Unfortunately, he wanted to get back left to set up for the next right hand turn. In each photo, he is slowly maneuvering his front tire back more and more towards the center, gaining more and more control. Even in the last photo, he still hasn’t completely gotten back to his neutral riding position, but he’s found the line he initially wanted. With ruts and ever-evolving bumps, mistakes and miscues like this are inevitable but Zach shows here that they can be overcome without sacrificing valuable time.

Marvin Musquin is one of the most technically skilled riders in the world. When the track requires finesse, both he and Christophe Pourcel excel. The French riders are well documented for their technical expertise. Here, Marvin is railing through a right hand rut. These ruts were incredibly deep due and long to the heavy morning mud. Long ruts up the ante for technique because a rider has to hold his line, lean angle and body position for extended periods. If any of those get out of whack before the rut ends, the rider will lose his exit acceleration, typically with legs hanging off and excess clutch engagement.

Marvin is nailing it in these photos, though. His inside leg is raised incredibly high. This is higher than most riders would have their leg even in a turn drill. Jeannie Carmichael was famous for forcing Ricky to practice turns endlessly and the leg placement was one of the paramount points of the drill. Keeping the leg high ensures that it won’t be dragged behind the bike, throwing off the rider’s balance point and leverage over the front end of the motorcycle. It also acts as a rudder in a deep rut such as this, waiting to correct any mistakes or loss of traction. Honestly, this is remarkable evidence of how disciplined Marvin's technique is. To maintain that form even in race conditions, when technique tends to slip, is proof of how much he practices the details that many weekend warriors would never think about.

AMart is entering the left hand turn that doubles as the first turn for the start. It follows a long uphill climb that is a bit deceiving because its incline can leave riders braking too early and leaving valuable time on the table. Alex is set up perfectly here. This is a pretty simple analysis but is also an example of how it should be done. His inside leg is raised and ready for the turn. He is braking with both front and rear brakes in a straight line, keeping his braking under control. His fingers are on the clutch, ready to pull the trigger and explode back down the hill. As I said, simple but picture perfect.