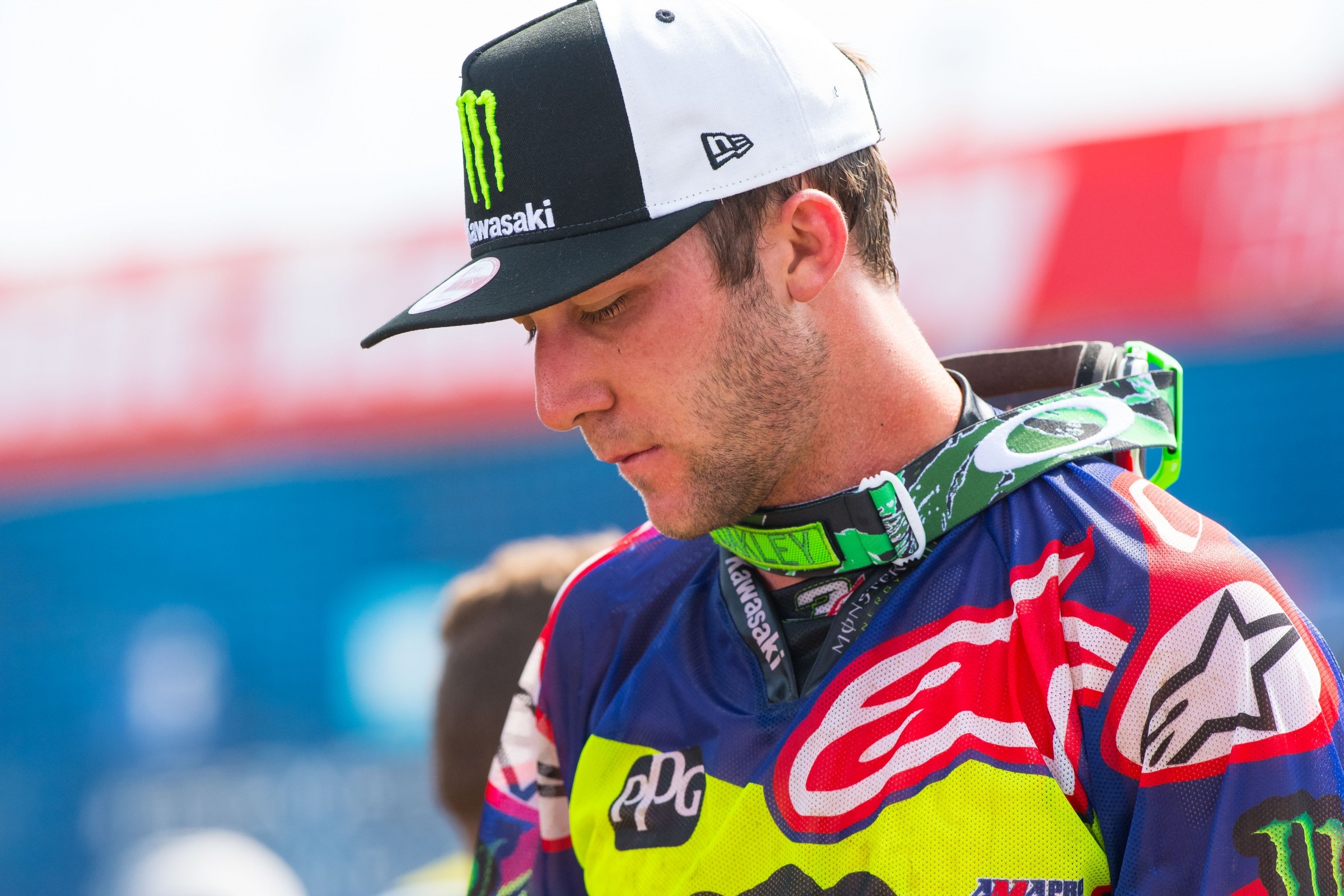 Ken Roczen is off to the fastest start in his 450 career—and it’s not even close. Through four rounds of the championship, Roczen has won 7 of 8 motos, three overalls (from four), led an amazing 117 laps of a possible 130 and has a commanding forty-one point lead over second place.

Roczen also got off to a fast start in the 2014 Lucas Oil Pro Motocross Championship en route to his first 450 title, but even that doesn’t stand close to the clinic he’s put on this year. Below are Roczen’s stats through the first four rounds of the championship in 2014 and 2016.

Of course, Kenny’s points lead did get bigger this year since Ryan Dungey missed High Point, the first national he has failed to compete in since the Steely City National in 2007. It ended a 75-race start streak in 450MX, and a whopping 99-race start streak in the Nationals between two classes, dating back to the start of the 2008 season. With Dungey out, Roczen’s path to a second 450MX title certainly got easier, but he said in the post-race press conference that his mindset hasn’t changed. “It’s never easy and I think the worst thing possible you can do is think it’s going to be easy. That’s why I needed another 1-1 just because I don’t want to ever let loose. I think that’s the worst thing you could possibly do and it’ll bite you. Obviously Eli’s going good right now too but there’s absolutely no mindset change.”

Eli Tomac and Monster Energy Kawasaki made progress with their starts this past weekend. Through the first three rounds of the championship, Tomac averaged an 11.6 position after the first lap. At High Point he was second and fifth after the lap 1. In a team press release, Tomac said he and the team have made starts a focal point. “We practiced starts for the last two weeks straight and I believe it showed today with two great starts. If I keep that up and stay up on two wheels, we should be looking good for the rest of year.”

Tomac crashed early in the first moto, which allowed Roczen to build a fourteen second lead early in the race. In moto two, he moved into second on lap 4 with Roczen nearly five seconds up at that point. Let’s take a look at their lap charts to see how they compared:

The return to the East Coast helped a number of riders. (For a detailed version on the track and why it developed into arguably the roughest and most technical of the season, read Jason Thomas’s Breakdown column.) Through three rounds, Marvin Musquin, Justin Barcia and Christophe Pourcel each averaged worse than a 12th-place finish per moto (Musquin 13; Barcia 13.3; Pourcel 14.6). At High Point, they combined for an average finish of 5.16 and three top five moto finishes—they each also recorded their best moto finish of the year. Prior to Saturday, the three had one top five finish between them (Musquin’s fifth in the second moto at Thunder Valley) through three rounds. The overall podium for Musquin was the first of his 450 career.

“It’s important to have rough tracks like this where you can have different lines and where you can show your technique,” Musquin said after the race. “Like Denver [Thunder Valley] was a really rough track but it got pretty dry and it was a difficult track. But today it was really soft and it stayed really soft. The moisture was really good all day. I was very surprised.”

Weston Peick also had his best finish of the season, going 13-8 for tenth overall. A week after missing Thunder Valley due to a concussion, Peick went down hard in the first moto but recovered for 13th. Racer X’s Kyle Scott got footage of the nasty spill, which you can see below.

Cole Seely’s attempt at a top five finish fell short in the first moto when he crashed while running fourth late in the race, dropping him back to ninth where he finished. Earlier in the moto, he was even stalking Musquin for second, before Jason Anderson got him. “I was running really good in the first moto, sitting fourth, but washed out the front end, which sent me back to ninth,” he said in a press release. “At that point in the moto I wasn’t able to put on another charge, so it was a little tough.” Seely finished sixth in the second moto for eighth overall. “High Point is typically not a great track for me; I’ve just struggled here the past few years, so I’m really happy to have this one finished.”

Altitude sickness ruined Jason Anderson’s weekend at Thunder Valley. Anderson actually has prescription medicine to help with the problem, but didn’t pursue a TUE (Theraputic Use Exemption) from the anti-doping team at USADA, and decided to race Colorado without the medicine in hopes he could get through it. It didn’t work. He was able to recover and grab another podium at High Point. “I qualified first in both practices, which is cool, I’ve never done that,” he said. “The motos went pretty well. I got a good start in the first moto then just tried to make my way through. I ended up falling, then I fell again, but I ended up coming back to third, which is good. I started behind Kenny in the second moto and just kind of stayed behind him in the same pace for three laps, but then Tomac went by me. We were all right there for a good twenty minutes. I’ve got some work to do. I really want to be riding with those guys. It’s pretty hot outside and I’ve got a little bit of a cold, plus I had altitude sickness at the last race that I’ve been trying to recover from.”

Bad news. Just as Monster Energy Kawasaki’s Josh Grant was building a solid season he ran into trouble with a big crash in practice. He laid on the ground for a bit catching his breath, and the team said he would be okay for the motos, but he only made it through four laps in moto one before heading to the pits. We have heard Grant was dealing with a nagging ankle injury already. We’ll keep you updated on his status.

James Stewart and Blake Baggett might be back this weekend for the Red Bull Tennessee National. In the meantime, Matt Bisceglia keeps flying the flag as a fill in. Following a tenth overall at Thunder Valley, Bisceglia added another tenth in the first moto at High Point. He high-sided in the second moto and DNF’d. “Unfortunately, in the second moto I got a good start and was in about 10th again and then on the second or third lap I just came down the corner rollers, swapped out and high-sided,” he said in a team statement. “That ended my day right there. It was a solid day besides that, it was just unfortunate it had to end like that. I gave it everything I had.”

We talked to Bisceglia before the race and he felt much more prepared coming into this one than he did before Thunder Valley, where he had only had a few days on the bike. He also says he was working on riding technique, doing some drills to stand up more and ride as smoothly as possible. “Been watching a lot of old Stefan Everts videos,” he told us.

Benny Bloss was on the gate for moto one but experienced a migraine headache. He basically couldn’t even see or focus, so he headed back to the pits. He managed to recover for moto two and salvage some points with a sixteenth, and nineteenth overall.

*Note: There was a problem with live timing and scoring at the end of the second moto. Some riders' Avg Lap Time are unavailable.

Austin Forkner’s 5-8 for fifth overall on Saturday doesn’t jump out on paper, but the rookie showed a lot of poise coming through the pack in the second moto. After colliding with another rider, Forkner rounded the first lap in twenty-third and fought back to eighth. According to a team press release, Forkner had problems with his gate in the first moto as well. “First moto was good aside from my faulty gate,” said Forkner. “The track was extremely rough, so I decided to sit back, ride smart and let everyone else make mistakes which allowed me to finish fifth. I started the second moto dead last after colliding with another ride but rode back up to eighth. Overall, we learned a lot this weekend and I believe I belong up front.”

Mitchell Oldenburg scored a career-best sixth in 250MX on his Lucas Oil/Red Bull/GoPro KTM, and it wasn’t easy. He rounded the first lap in moto one in nineteenth and came back to seventh. In the second moto, he came back from thirteenth to seventh. The team needed some good news, because Jessy Nelson hurt his knee and didn’t race, now matching Alex Frye who is already out with a knee injury, and Justin Hill, who is still out with what we’ve heard are back problems. Rough year for this team!

A career-high day from Colt Nichols could have been even better if not for a crash while running eighth with two laps remaining in the first moto. Nichols would rebound to finish thirteenth in the moto. The CycleTrader.com/Rock River Yamaha rookie finished a career-high sixth in the second moto for seventh overall.

Traders Racing Kawasaki was at full strength for the first time all summer on Saturday. Gannon Audette was back after missing the previous two rounds due to a concussion. He would finish 34-22 for twenty-eighth overall. The team also got back Nick Gaines, who has been out since January due to a broken femur. Gaines only completed two laps in the first moto, but fought back to seventeenth in moto two.