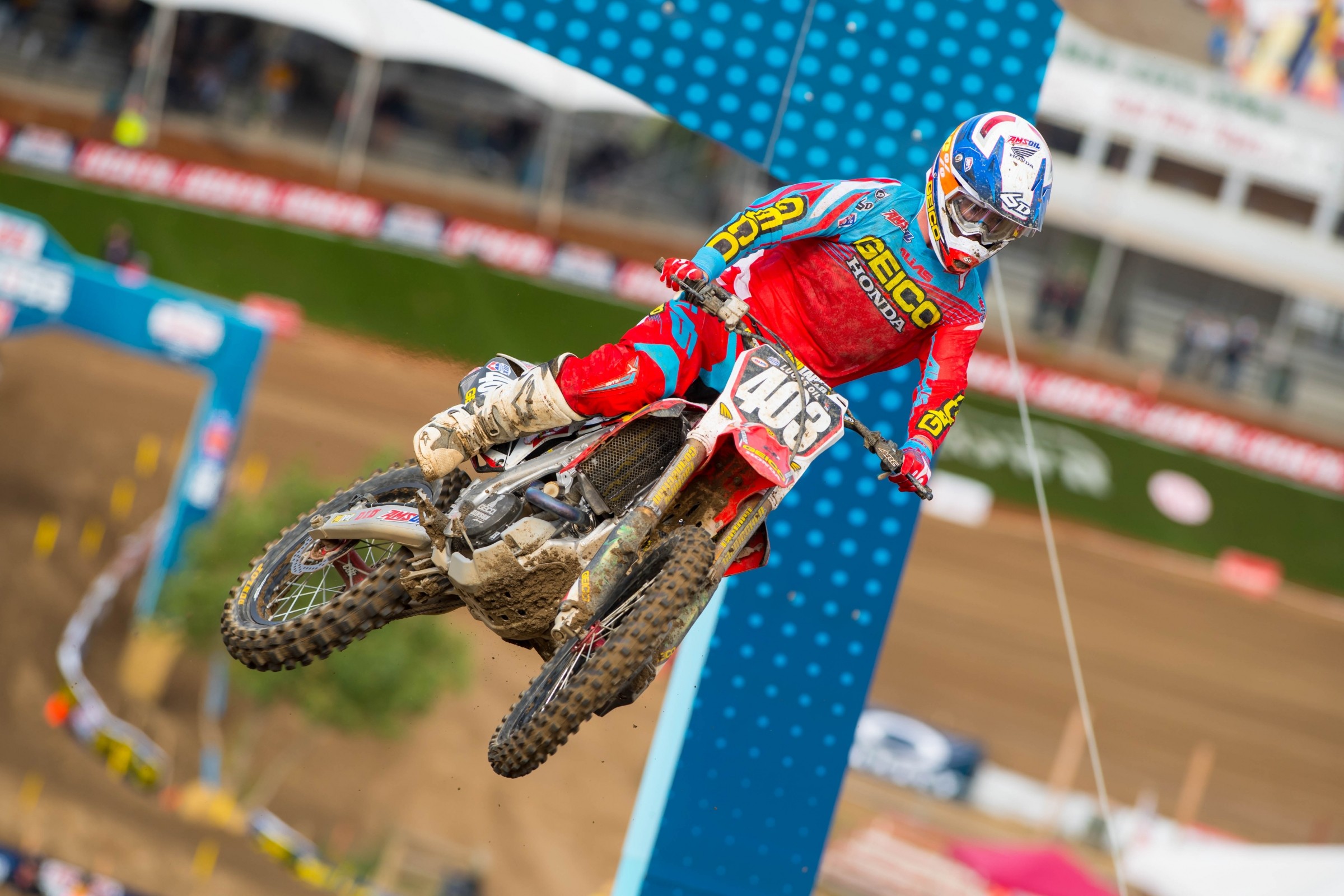 The trend continued on Saturday. Back in the day, the top amateur prospects waited until after their final go-round at the AMA Amateur National Championship at Loretta Lynn’s Ranch, or quietly toiled away with the old “pro-am” racing license, before making a real go as a professional. That changed a dozen years ago, when Factory Connection Honda (GEICO Honda today) unleashed Josh Grant at the 2004 Hangtown opener, and he promptly holeshot and checked out!

Grant would eventually stall the bike, and those 250Fs were not easy to re-fire back in those days. His results ended up being terrible that day, but he logged five top-ten overalls and two podiums during his rookie campaign. Solid.

The GEICO Honda squad pounded the point home years later when Justin Barcia and Eli Tomac made scintillating pro debuts at the Lucas Oil Pro Motocross opener, with Barcia leading laps and Tomac going all the way home with the win. This year, Monster Energy/Pro Circuit Kawasaki’s Austin Forkner and GEICO Honda’s Tristan Charboneau made the leap at Hangtown. How did they do?

As mentioned, don’t let the results fool you. Grant was pulling away in the first moto until he stalled.

Barcia’s brash attitude made him well suited to a “not intimidated by these guys” debut, and he took the lead on the first lap of his first moto ever as a pro. He faded a bit late, but was even better in moto two, which he led until third-year pro Ryan Dungey wore him down in the waning moments.

The gold standard that, similar to Eli’s domination in the 450s last year, might never be matched. Tomac was on the gas all day at Hangtown and looked to be the only rider able to challenge veteran Christophe Pourcel. Pourcel had a crash and the kid was able to win his first-ever pro race. He was fast the next weekend at Freestone in Texas, but the heat got to him, and he was never able to recover into the same rider for the rest of the summer.

Nelson got an unexpected call from TLD to make his debut earlier than planned. He was okay at Hangtown but much better the next week, when he took seventh overall at Freestone.

This debut was supposed to happen at Hangtown but Cianciarulo came down with salmonella and the team decided to let him wait. He was back for Round 5 at Budds Creek and he nearly pulled the holeshot before going wide in turn one. He was okay here but didn’t show signs until he got stronger late in the season, and he logged a podium in a moto at Utah.

You might have forgotten about this one, as Baker got the bump from KTM’s Orange Brigade amateur program to its FMF/Orange Brigade pro team. Like Nelson several years earlier, this was a late decision but Baker put in a good showing in moto one. He’d actually only topped that 13th in the final moto of the year in Indiana, where he finished 12th.

Frye started at Round 4 at Muddy Creek in 2015. It was tough and he only logged three motos in the top twenty during an injury riddled first campaign. His first moto at Hangtown this year was more solid: 10th.

Forkner had maybe a bit too much hype coming into the opener, especially since every big-name amateur joining a proven professional team has to compete against the ghost of Tomac. He was quick throughout the day and had a brief fall in moto one, otherwise he might have been top ten each time.

How about the two rookies scoring the exact same amount of points for the day? (Forkner got the edge on the overall by virtue of the better second moto tiebreaker.) Charboneau got the late call to make his Hangtown debut thanks to his strong riding in practice motos against his teammates, and since Malcolm Stewart decided to forgo the motocross season.

The other, other rookie made his debut this weekend as well. Mosiman is a hometown kid from Sebastopol, CA. This wasn't the full-factory debut like Forkner and Charboneau but it was his first pro race nonetheless.

Osby was supposed to race the East Region in Monster Energy Supercross this year with Motorcycle Superstore but his debut was delayed due to injury. He lined up this weekend but had a bike problem in the second moto.