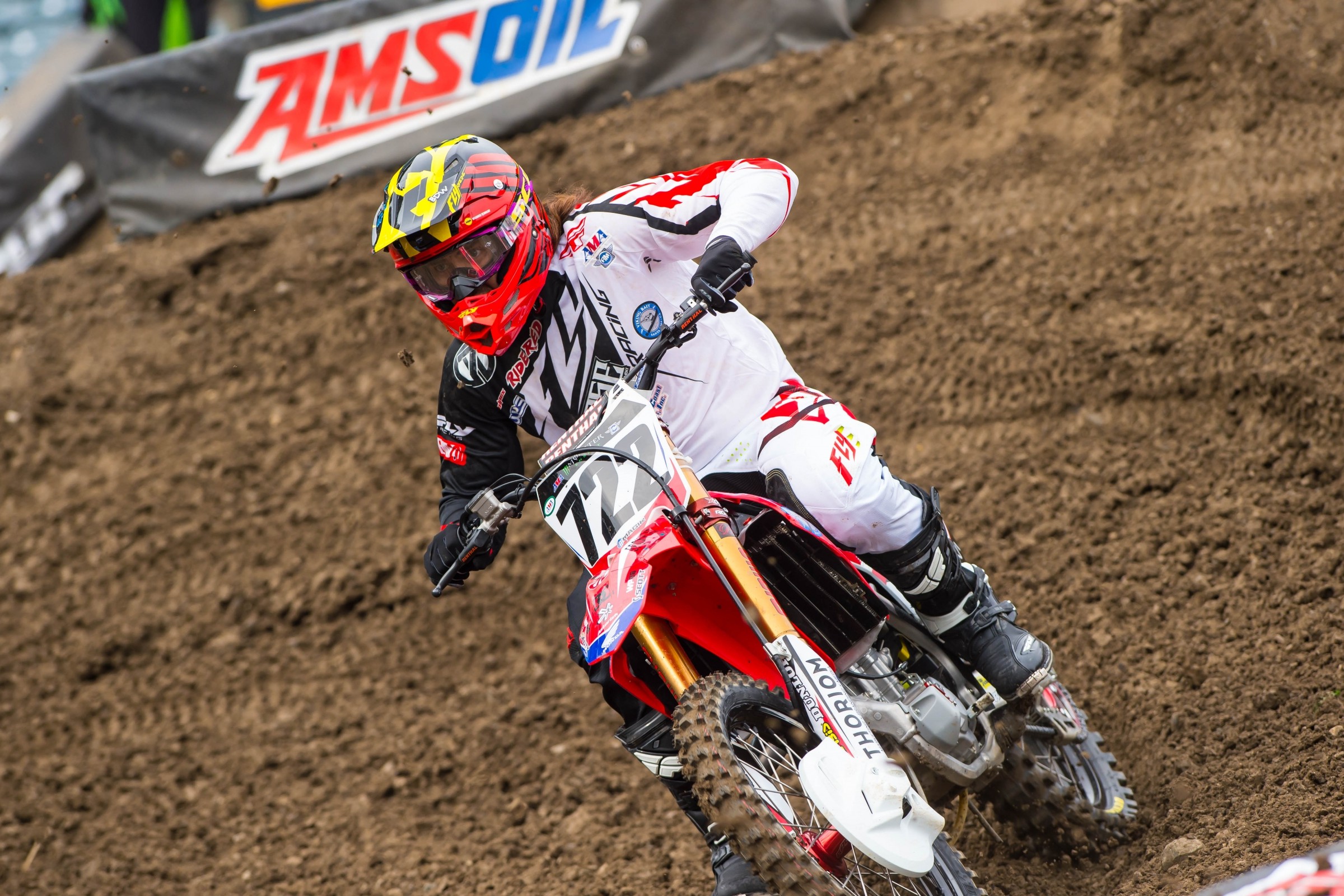 Revolver A Column from the 722

Whether it’s an interview with the weekend’s winners or a silly season update, we strive to keep you informed on all things racing here at Racer X Online. But there are some racers in the paddock, like Adam Enticknap, whose unique personalities and layered stories are nearly impossible to fully capture in print. So what do we do? Turn the reigns over to them, of course! Check out what the 7deucedeuce has to say about what it’s like to land a ride, only to lose it to injury.

My name is Adam “7deucedeuce” Enticknap and I am a privateer who races professional Monster Energy AMA Supercross. We all know being a privateer is a struggle, and is sometimes unfair. To me, being a privateer is an opportunity for greatness. An opportunity to come from the bottom and make a dream that once seemed impossible, possible! Of course, to go from buying a bike in the showroom to factory rider, there are a few steps involved. Step one, make a night show in supercross. Step two, qualify for a main event. If you make it to step two, you are ready for step three—becoming a factory rider. That’s where I found myself earlier this season, filling in on a satellite team to showcase my ability on good equipment with everything taken care of.

Those sound like three quick and easy steps, but they’re far from it. I have been racing BMX since I was four years of age, and racing motocross since I was twelve. I turned pro at 22, and now am three years into the madness trying to figure out how to go faster by working and putting the time in to be the best I can with the resources I have. Unfortunately I found myself on the sidelines with a broken femur. Injuries are part of this wonderful sport whether we like it or not and they will be forever. That’s why we love it. An injury [Kyle Chisholm] is why I got the opportunity at Rocky Mountain ATV MC and it’s also why I lost it.

Rocky Mountain approached me during track walk at Anaheim II, asking me if I wanted to take the ride. I had my own team at the time, 7deucedeuce/SKVI/Thoriom, which was amazing, but what Rocky Mountain had to offer I could not deny. I took the ride and it was everything I had imagined it would be. The next week in Oakland I got the holeshot in the LCQ and made my first main event of the year! It was literally the perfect way to start out the season on the new bike and team.

The next week I had a great time practicing with the guys at Rocky Mountain and getting the bike dialed in even more than it already was. I was starting to feel it in Glendale. Having your hotel arranged, not setting up the tent, and having a kick ass mechanic (Mike Medina) who gets your bike ready, takes more weight off your shoulders than you can ever imagine. It was so easy I felt like I was going to do good no matter what! That week I didn’t make the main but I was the closest I had ever been to the leaders’ lap times. To me that was more of a gain than anything. Knowing that the bike and the team were helping me to reach my goals for the season was HUGE!

After Glendale my confidence was high and my speed was there—I was on fire. Then I crashed and broke my femur practicing at the Lake Elsinore SX track. Just like that, it was the end of the Rocky Mountain ride and the end of my supercross season. This sport is a true test of heart—in every single way possible. When the doctor told me I’d broken femur all I could do was cry my ass off in that hospital bed. It broke my heart and soul to know that at the best point in my life and career, it all had to come to a screeching halt because of one mistake. I tried to find the good in the situation, but at that moment I was at an absence of thought. All I could think was, ‘Why me, and why now?’ I just didn’t understand. Well, sometimes shit happens, that’s why they made the bumper sticker.

The next day I felt better and was starting to rediscover the bright side of life, which may or may not have been a product of all the pain killers. Either way, I’ll take it. I have been putting in a lot of work on my music and I am very excited for my album, “#HEAT1,” to drop in mid-June! I even made an intro song for Chad Reed that they played at the Santa Clara Supercross! As far as riding, I’m one month out from getting back on my bike and I am more excited than ever. If you know me, you know I truly enjoy riding my dirt bike more than 99 percent of the other riders in supercross. I have to hit the restart button on step three, but I don’t mind at all. It’s about the journey to the top, and that’s what makes the journey so great. Right now it’s back to privateer life, but for me it’s not privateer for life. Step three, here I come.