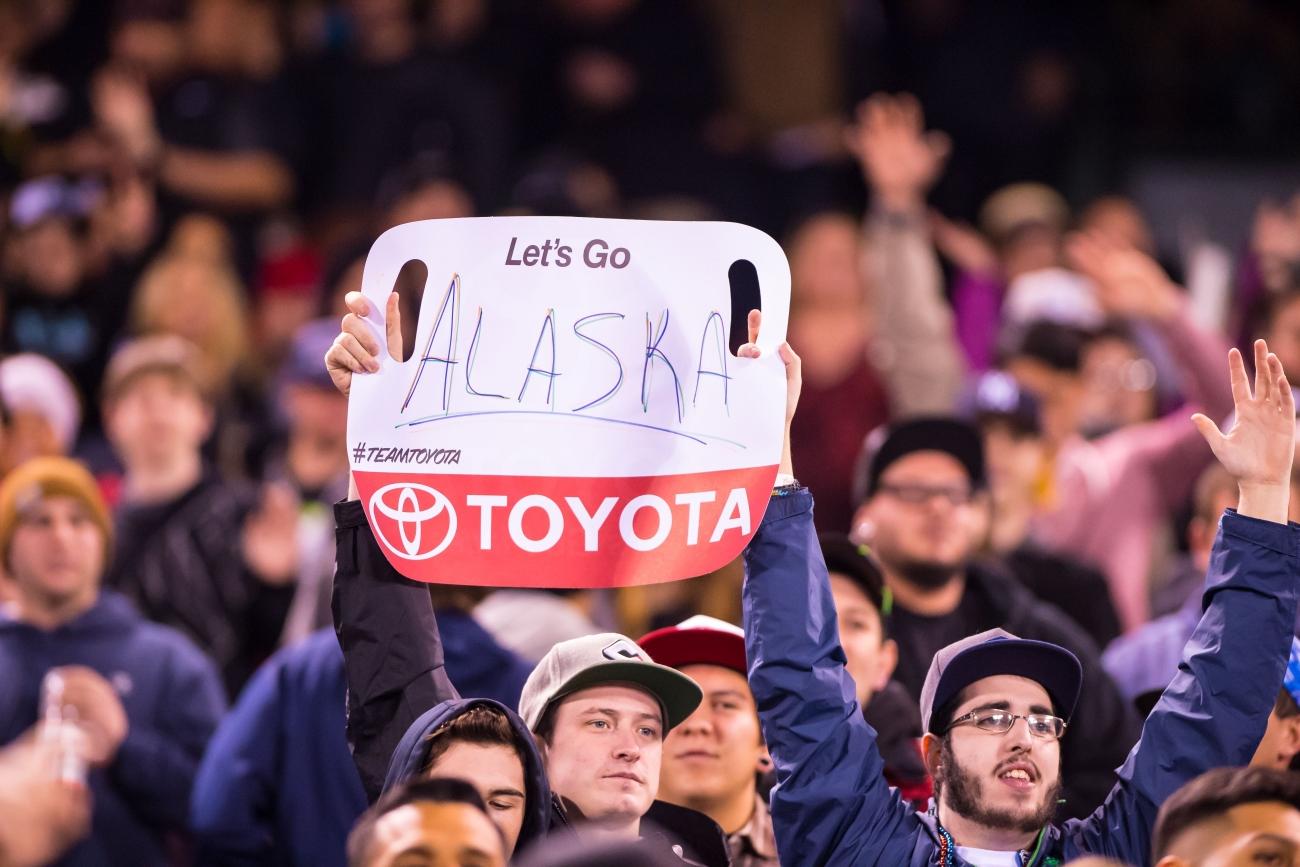 If you tune into the Winter X Games from Aspen this week (Thursday through Sunday on ESPN and ESPN 2) you’ll undoubtedly see a big presence from GoPro. The camera maker giant first covered the event back in 2011 and has been a big part every since. A lot of those excellent shots you see are actually from Matt Cook, a production artist for GoPro, who has manned the follow camera for the last five years. In a lead up to the X Games, Sports Illustrated profiled the California native who once had dreams of competing in X Games himself.

To blend into the background, Cook approaches the course in the same way as the athletes he trails. He scouts each rail and jump. He takes several practice runs with a GoPro affixed to a ski pole, which he says now feels like an extension of his arm.

And while the skiers and snowboarders launch themselves off each feature and attempt a dizzying array of flips and spins, Cook has a different objective: stay smooth, stay steady, and most of all, stay out of the athlete’s way.

​“The last thing you want to do is ask an athlete where they are going on the course right before they drop in,” Cook says.

Announced earlier this week, GoPro will now be integrated with Periscope, the live-streaming app owned by Twitter. The integration currently works on iOS with the GoPro Hero 4 Black and Hero 4 Silver. The move allows Periscope to recognize a GoPro whenever one is connected to an iPhone, giving users the option of broadcasting with the camera. More from Wired:

The point being: GoPro gives Twitter (through Periscope) more than just words and pictures to tell every story. It gives it a live, unfiltered video feed from every possible angle. That’s powerful, especially for a social service that’s been struggling to attract new users, and keep the ones it has engaged. It also lets Periscope break out from its smartphone confines.

As for GoPro, it’s dabbled with livestreaming apps before; it announced a similar partnership with Meerkat last summer. But Periscope, which is owned by Twitter, gives it indirect access to Twitter’s 320 million monthly active users. And the more people see that its cameras can be used for more than just barrel rolls, the better chance GoPro has to reverse its sales decline.

You can check out more here.

Monster Energy is all about the dunes right now

Have you noticed that there’s been more than just bikes racing on our tracks lately?! @wienerschnitzel #Weinercross pic.twitter.com/J5dA8mcSGB

Last week we told you about Ken Roczen’s photo shoot featured on SI.com, and how utterly ripped he looked. Seriously, check it out. This week SI released a video feature they put together with Roczen. It definitely leans toward viewers that don’t know much about the sport, but it’s still pretty cool.

Kyle Regal Knows How to Deal with jonas

Late last week, Youthstream and Milestone released a action trailer for MXGP2—The Official Motocross Videogame. The game will be available on Xbox One, Playstation 4 and Windows PC/Steam on March 31, 2016. Here's some info on it from a press release, bear in mind this is Euro stuff so the language in the quote below might seem weird.

“This year thanks to new technologies and precise work on the reference side, we’ve improved a lot the final look of the tracks and the riders. This trailer represents the work we’ve made this year for the artistic side of the game,” said Elisa Consolini, lead artist for Milestone. “The high quality of texture placed on the riders’ 3D models and to the tracks, with an amazing work in replicate the silhouette of the track, and great lighting effects will offer a pleasant experience to all the players.”

The Drone Racing League thing is apparently a very real thing, with a website and all. According to the site, the 2016 season will feature “six races around the world for pilots to earn season points. The pilots with the most points qualify for the World Championship race, where it’s winner-take-all.” Ok, then.

Yamaha has unveiled the 2016 YZ450FM that reigning MXGP champion Romain Febvre and Jeremy Van Horebeek will pilot in the 2016 FIM World Motocross Championship. Personally, I think the bike looks amazing. What are your thoughts?

Tucker Hibbert is the Michael Jordan of SnoCross. In 2016, Hibbert will go for a tenth X Games gold medal (this week in Aspen) and a tenth National Pro SnoCross Championship since 2000—both records. Hibbert also has the most SnoCross wins in history with 114 victories in 192 starts for a winning percentage of almost 60 percent—also records. While most in our world know Tucker for his Lucas Oil Pro Motocross appearances, where he’s been competing off and on since 2003, his start at X Games is a great story of father and son. In a lead up to X Games this week, Sports Illustrated ran a cool feature on Hibbert.

Tucker was a semi-pro racer, working his way up through the ranks, when he wrangled an invitation to the X Games. After surviving the qualifying rounds, Tucker found himself in the group of 10 finalists, which included the old man.

“I remember being a little nervous at first, like, Am I going to get in trouble if I pass my dad, or beat him in the race, or is he going to be excited?” says Tucker. “I didn’t know what to do, because he’s a serious, competitive racer, and he wanted to beat me.”

You’ll want to read the rest.

Somehow, this pro skier was okay after falling 1,000 feet https://t.co/KnPXLqd6J6

No New Bikes for Aprilla at Sepang Test

According to a report by Crash.net, Aprilla will not have the new RS-GP machine at the upcoming MotoGP test at Sepang. Sources told Crash.net that the team will not participate in the Phillip Island test in February either, instead choosing to conduct a private test in Qatar.

Along with the Losail track being logistically closer to Europe than Australia, the news suggests Aprilia is already playing catch up in its pre-season preparations, and wants to give the new machine a run out in a private setting, away from the public's prying eye, to ensure everything is working at a sufficient level.

The team then aims to be present at the final official test, again in Qatar, at the beginning of March, just two weeks before the first round of the new season gets underway.

In arguably a year which sees the biggest technical change in the premier class since 2007, as teams and riders come to terms with Michelin's new tyre characteristics and Magneti Marelli's spec ECU software, the news will represent a set back for Bautista and Bradl.

Both riders struggled with the significant changes in Valencia at the close of 2015 with Bautista crashing twice, leading the Spaniard to revert to his old electronics (because of “too much difference”) for the first two days at a test in Jerez at the close of November.

Last week Facebook launched Facebook Sports Stadium, the company’s first shot at a real-time sports experience. Facebook is building a hub around each big name that will pull in a variety of content, from experts to teams to live play-by-play and even your friends. It’s currently only available on iPhones in the US. Mashable has more:

The new hub will be a feature within Facebook, a small departure from the company's recent practice of breaking out new ideas into standalone apps, such as Rooms, Notify, Paper, Camera, Messenger and others.

Sports stadium is also notable for a design feature that mimics Twitter — updates appear chronologically. This makes sense, as following a live event tends to lend itself to this system, but is a very incremental step away from Facebook's Timeline, which is curated by an algorithm and is not chronological.

I received an email earlier this week from Matte Media, promoting a new movie called FLATS. I nearly deleted it, because, well, I get a lot of these type of emails. I’m glad I didn’t. The movie, which will be released internationally on March 25, follows Australian Nigel Petrie as he builds a salt flat racer and travels with his buddy across Australia in hopes of setting a speed record. Check out the trailer below, it’s pretty cool.