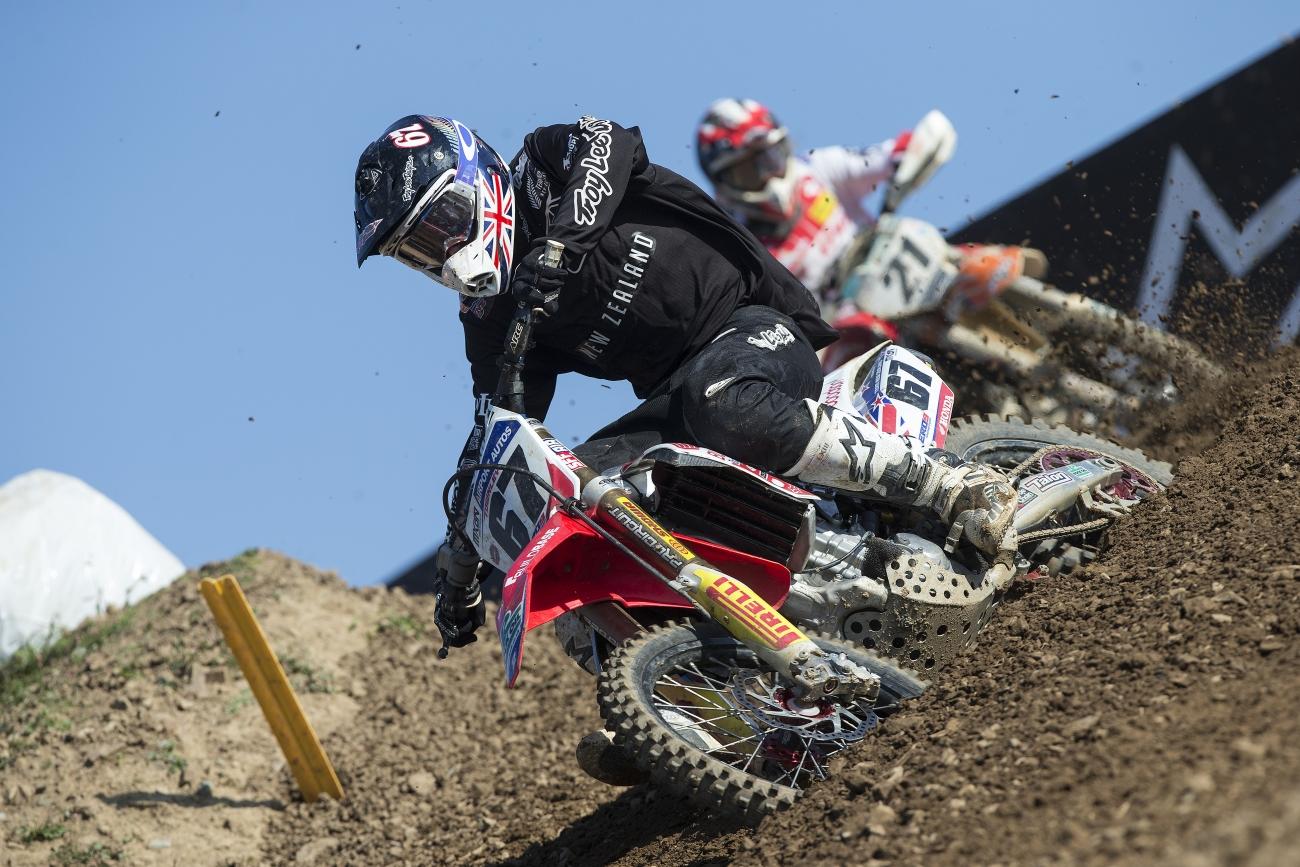 David Pingree: The Tornado is too easy and, frankly, I knew what I was getting into. The biggest struggle I had was at a Canadian National in Deschambault in Quebec. The track was actually pretty great, but it was deep sand with hills and ruts everywhere. I was on a Honda CR250 that hadn't had a clutch change since before any of the Kardashians made a sex tape. If you are out of the pop culture loop what I'm trying to say is that this bike had never had a new clutch put in it. A sandy track with ruts and hills is not where you want to have a slipping clutch. I got my ass handed to me, in front of a bunch of Quebec folk, which makes it much worse. And I think it even rained on us during the last moto to add insult to clutch-slipping injury.

Jason Thomas: I am going to have to bestow this honor to a race I took part in down in Mexico. The year was 2010 and Sebastien Tortelli helped organize a race involving some of the more well-known riders of yesteryear. Guys like Stefan Everts, David Vuillemin, Doug Dubach, and of course Tortelli, all made the trip down to Guadalajara for a weekend of racing and fun. Now, any race in Central or South America is going to be interesting on many levels and often times that includes the quality of the bike you are presented with. In this case, I was told I would be getting a “like new” Suzuki RM-Z450 for the weekend. Perhaps my translation of “like new” is way off base but the two shells of bikes that were wheeled over to my pit area hadn’t been new in many, many moons. I was basically given two non-working bikes and was asked to have my mechanic build it into one decent machine. Again, the problem here was that they both had been hammered into submission, leaving a choice between unsafe and broken. To make a long story short, we got one bike up and running for at least part of the weekend. Halfway through the event, parts started flying in every direction and I decided that I had tempted fate enough. I was forced to watch the final moto, but, being an exhibition event, it wasn’t a big deal. I will never forget the look on my mechanic Dan’s face when they rolled those wounded chassis over to our tent.

Jimmy Albertson: My story would have to be a race in Puerto Rico with Zach Osborne. Before going down there, it was apparent that I was going to be racing a Yamaha 450 and Zach would be on a Yamaha 125 two-stroke. I figured I would have this baby in the bag with Waco Zacho riding a 125. We show up on race day, and our bikes are sitting under a tent. The 125 is brand new, pulled off a show room floor and sitting next to it is an all black beat up freestyle bike with ape hanger bars and grab holes in the air box. I ask where the 450 was and they pointed at Freestyle Fred's bike. The bike was so sketchy that I just planned on cruising around and not pushing it, but come gate drop I couldn't let Zach own me on a 125!  He beat me the first race, but I brought home the moto moto win and overall on my Metal Mulish Yamaha. I became a Puerto Rican legend and now that date, November 2, is known as "Jimmy Albertson Day" in Puerto Rico.

2. How did off-season races impact your prep for racing Anaheim in the US? Could you get in any training over there? Could the races be used for any practical sort of testing? When you came back to the US, did you have to take a few days to recover? Did you feel you lost something?

Pingree: Off-season races are a risk, no question. You fly overseas in the middle of "boot camp" season and ride on a small track with a bunch of Euros who have a tendency to cartwheel every other lap. The tracks are too tight and small to be a realistic test of parts and setup for U.S. supercross so the only upside is getting in some gate drops, which is always good. There is no riding or testing outside the stadium in Europe in the winter either because it’s cold and rainy. If you make it out unscathed you still have to fly home and overcome jet lag and the extremely high chance of getting sick. A one-race trip cuts two weeks of effective training out of your schedule and that is a significant amount of time when you only have two to three months to prep. Looking at this alone it seems like a no-brainer to stay home and keep chopping wood at the test track and the gym, right? The problem is a good U.S. rider can make some serious cheddar by signing up for two or three of these things. Like, six-figures-regardless-of-results serious cheddar. Justin Brayton just cleaned up during a two-week trip and said he made more in two races than his mom will make all year working 40 hours per week. Some guys, like Larry Ward, built their retirement nest egg by doing well overseas. The cash comes at a price, as you definitely lose prep time for the start of the season. It makes the most sense for a 250 guy riding East Coast supercross. They should be racing everything over there and raking in cash like a clean whore in Saigon.

Thomas: I always was torn on this subject. There are so many side effects to racing a lot of events in Europe before the season. As far as the race prep, I felt like it did a great job helping with that. Racing throughout the U.S. off-season helped keep me up to speed and I always felt like I was in the flow of racing. Anaheim felt like just another event after going strong for ten weeks straight leading up to it. The downside, however, was that my body was beat up and worn down. I had traveled about a hundred thousand miles and raced at least ten events in the past three months and I could feel every bit of it as the season approached. I can remember my teammates being so amped for the new season, fresh from the off-season and ready for the hard months ahead. I was on the opposite end of the spectrum, fatigued from the months of racing and quietly wishing there was a break in the action. I say quietly because no team or team owner wants to hear about their rider being exhausted entering a four month stretch of racing. It was always a choice, though, and the 75-100K I had just collected helped ease the burnout. It’s tough to say which method would have left me more prepared, racing my way into shape with high intensity preparation or staying home and putting in the more methodical off-season boot camp. I think I would have felt better on the weekends and more motivated had I stayed home but I think my form and readiness was a direct result of the endless gate drops I just endured. It’s an interesting topic that I spent many, many hours contemplating every September.

Albertson: I always feel like racing as much as possible helps keep you up to speed. The problem is that traveling to Europe always seems to make me sick as a dog. I think it’s because of the time zones. When you fly over there, you lose time and show up in the morning—at that point you need to stay up the entire day to get on their time schedule, or you’re going to want to nap during the day and be awake at night. So you try to adjust, but when you come home, the time change has you arriving at night for bedtime, but by then you’ve programmed the American night to be your European daytime!

I think the bigger off-season races like Bercy-Lille are a good choice, if you can bring a similar bike set up and team mechanic to the race. If you race German Championships or smaller races for money, you never really know what you are getting yourself into. Between not getting paid, getting injured, or getting kidnapped and being sold for sex trafficking, you are probably better off hitting the test track in the great U S of A.

3. Ben Townley is back! Ping, go ahead and gush. You others can weigh in, too.

Ping: I don't want to go all Matthes/Ferry on this but I'm pretty damn excited that BT is coming back. I know he really respects Stefan Everts [who doesn't?] and he will be on excellent equipment for 2016. Ben will certainly have his hands full with Romain Febrve, Tony Cairoli and the boys, but I think he'll be a player for the world championship. This comeback shouldn't come as a huge surprise; retiring from racing is hard enough when you do it on your own terms. Ben was basically forced to hang it up due to a staggering run of injuries from 2011 until he called it quits, including a serious hit to the head. Ben has unfinished business and he proved he is still capable of getting it done at the Motocross of Nations this year. BT has always had the talent, speed and grit to win, he just couldn't stay healthy long enough for it to show. I've got my fingers crossed that 2016 is the year he does it. Good luck, BT—go do our number proud!

Thomas: This will be interesting. I honestly think this whole idea was hatched because of his great ride in Ernee at the Motocross of Nations. Had he not done so well, this opportunity probably doesn’t arise and he stays in New Zealand for 2016. If this is truly what he was hoping for, then good on him and I wish the best for him. My only real concern is his health. He has had a tough go when it comes to injuries and has retired multiple times because of them. I hope for his sake that he can just stay healthy and enjoy this next go-round.

Albertson: I'm so happy to see this! Anyone who has ever met Ben has instantly become a fan. When I watched the Motocross of Nations this year, I thought to myself, it would be a real shame if this was the end of BT101. The guy can still ride! Hopefully someone has put his voodoo doll down, and we can see Ben reach his true potential.