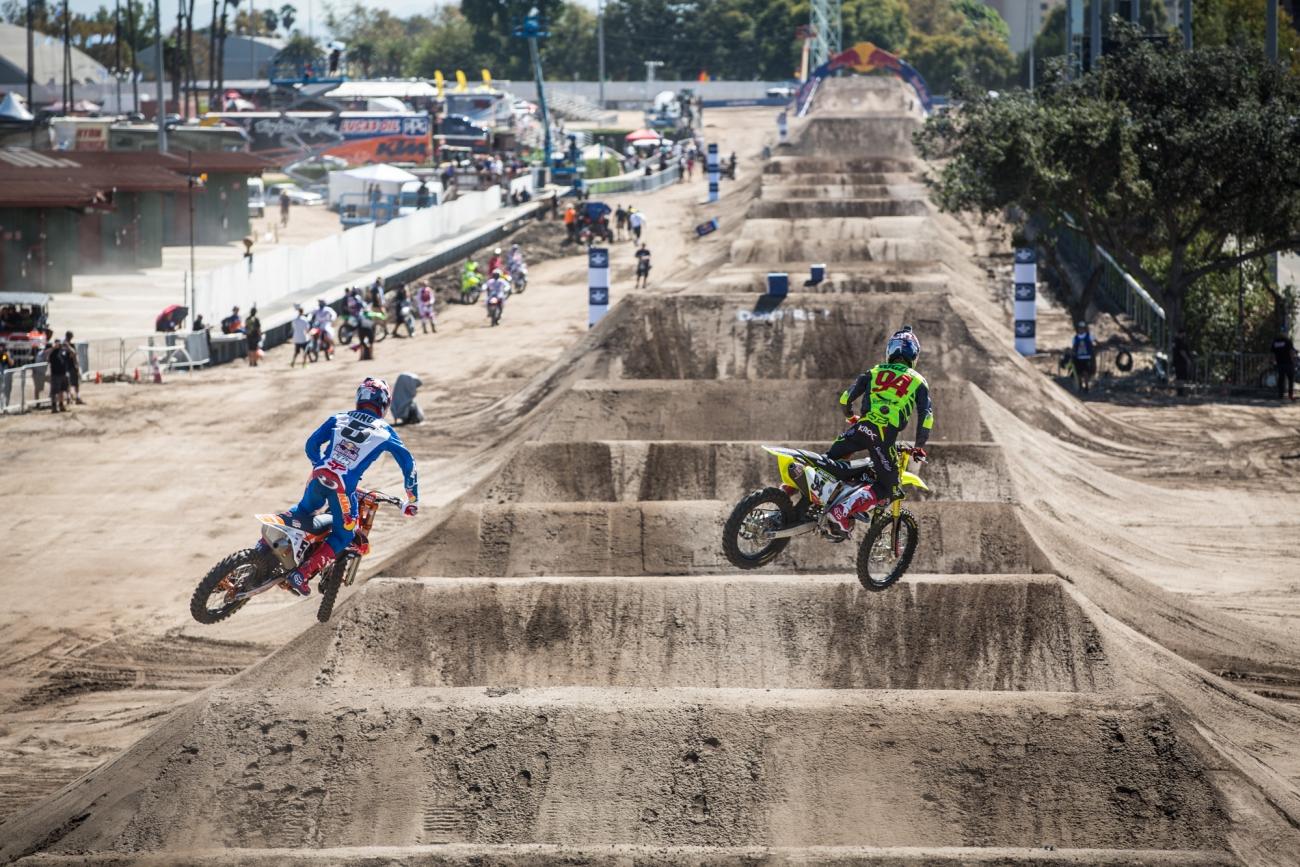 Off-season? What off-season? Fresh off the Motocross of Nations in France and a week away from the Monster Energy Cup in Las Vegas, the motocross world gathered at Fairplex in Pomona for the second annual Red Bull Straight Rhythm today. And with names like Ken Roczen, Ryan Dungey, Dean Wilson, James Stewart, and many more (but not Marvin Musquin, who recently underwent wrist surgery) set to compete, the fans, both in person and online, were expecting some great racing. They weren't disappointed, either. For a blow-by-blow report check out The Feed from today's action below, or for some behind the scenes info, check out Saturday Night Live.

The early stages of Lites Class racing were a bit tighter than the opening 450 rounds. Unfortunately, one of those races ended with RJ Hampshire going down hard in the whoops. Hampshire and teammate Jordon Smith were putting on a spectacular battle when it happened, with neither one gaining a clear edge. The latest word on Hampshire was that he was knocked unconscious for several minutes, sustained a bloody nose, and was taken to a local hospital for a CT scan. Initial reports indicate no broken bones. Elsewhere, Matt Bisceglia, Austin Politelli, and Michael Leib were eliminated in the opening Lites Class rounds, which set up teammate battles between Troy Lee Designs Lucas Oil Red Bull KTM’s Shane McElrath and Jessy Nelson, and GEICO Honda’s Jordon Smith and Malcolm Stewart.

It’s quarterfinal time here at Red Bull Straight Rhythm, and as expected, the battles are starting to tighten up, especially between Wilson and Brayton. The pair, who battled last year, were neck-and-neck for most of the strip, but Brayton scraped out a gap in the whoops to take the win. In the matchup’s second race Brayton once again beat Wilson, sending the Red Bull KTM rider home early. The tighter races continued with Partridge and Dungey. Partridge had the crowd on their feet when he pulled up alongside Dungey in the whoops, but Dungey was able to open it back up in the last quarter for the win. Dungey would go on to eliminate Partridge in their second race. James Stewart did the same thing to Josh Hansen moments later.

In the semifinals Brayton gave Ken Roczen a run for his money, but Roczen edged him out and took a more convincing win in race two to advance to the finals. The racing got even tighter when James Stewart and Dungey went at it. Stewart had the advantage, but Dungey came back at the end and pulled ahead right in front of the finish line. In the pair’s second race it was the opposite—Dungey had the early advantage but Stewart came back late to take the win by a wheel, sending the crowd into a frenzy. In the tie-breaker the two were fairly even until Stewart took the advantage over a dragon’s back, which was enough to take the win and advance to the finals.

In Lites action it was Malcolm Stewart going up against McElrath in the final. Stewart won the first race handily, and although McElrath put up a much harder fight in the second race, Stewart was just too strong. He won the race, and the overall for the day. In the Lites Class battle for third it was Jordon Smith beating Jessy Nelson.

In the Open Class it was Brayton and Dungey battling for third, with the position going to Dungey after two consecutive wins.

Finally, the moment everyone had been waiting for rolled around when Ken Roczen and James Stewart exploded out of the gate in the final matchup of the day. They kept it tight initially, with Roczen edging out a lead, but Stewart come right back in the whoops! Roczen battled back and nearly made the pass, but Stewart held on for the win by literal inches. The second race got under way exactly the same way, but Roczen accidentally crossed the median, which earned him a disqualification and handed the win to Stewart for the second year in a row.