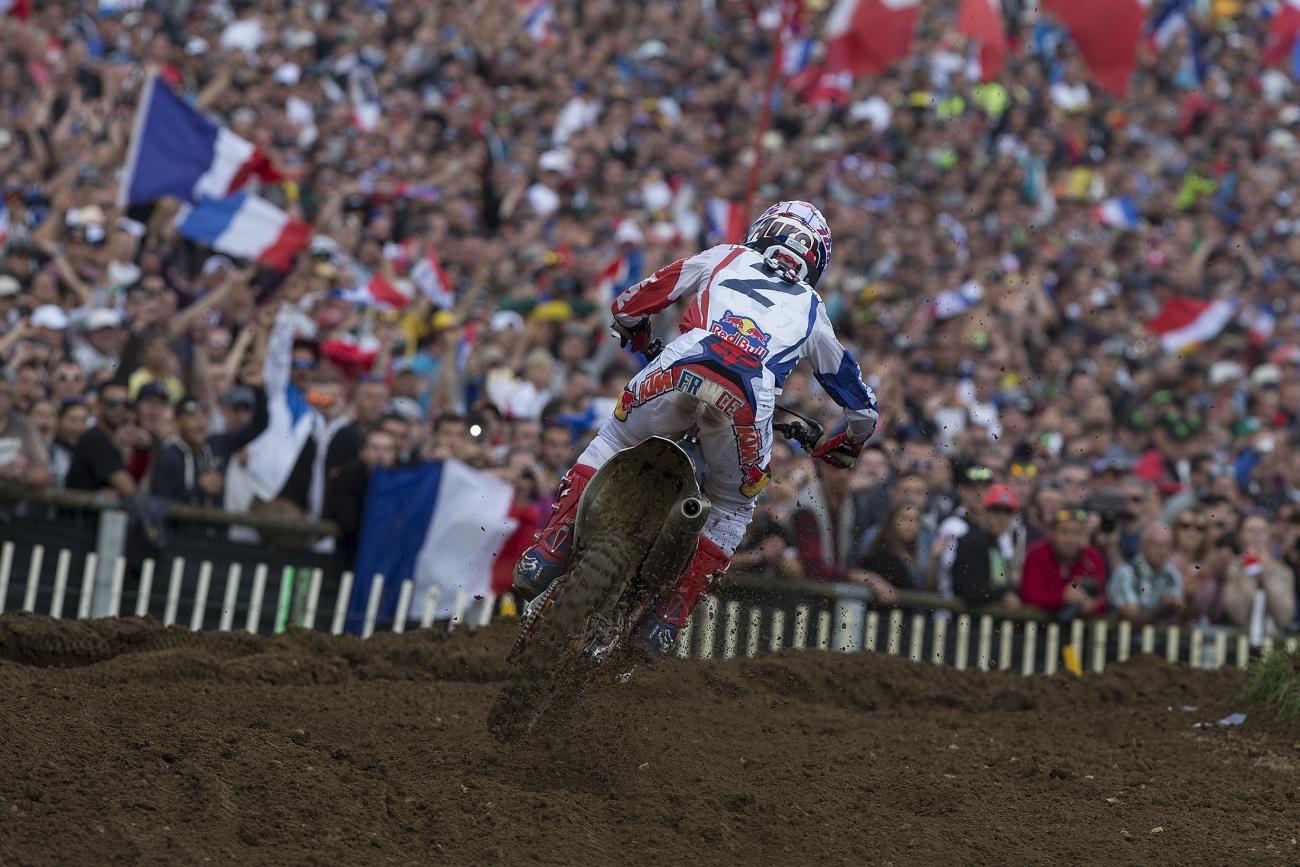 Another year and another Motocross of Nations have passed. Going into this one, I really felt like Team USA were heavy underdogs. The defending champion, Team France, had what may have been its most potent team ever. It was also hosting the event on home soil on a track that is suited well to the French style of riding. All of the stars were aligned for a dominant performance from the French, and leaving the track Saturday evening after qualifying, it sure seemed likely.

Americans Justin Barcia, Cooper Webb, and Jeremy Martin had their work cut out for them. For such a strong group of riders, no one was giving them much of a chance after Saturday's 1-1-1 score from the French group of Gautier Paulin, Romain Febvre, and Marvin Musquin. They were ahead of the Americans in each timed qualifying session as well, leaving no real optimism for Team USA. It seemed that everyone was handing the trophy to the French already—except the three American riders themselves. They had no intentions of handing anything to anyone.

In the first moto of the day, Justin Barcia rocketed out of the gate much like he had this summer. He took command of the race and looked poised to run away with the win. Marvin Musquin, on his 250, had other ideas, and set off after the Yamaha-mounted Barcia. Finally catching him around the halfway mark, the two would embark on an epic multi-lap war. Both riders were ultra-aggressive, taking some interesting angles on pass attempts. For Barcia, I really felt this was a smart move. He had been caught by Musquin and needed to see where he was losing time. The worst thing he could do was to let Musquin keep his rhythm and build any sort of gap. Barcia did what he needed to do—he dragged Musquin into a showdown-type race where it became more of a one-on-one type affair versus simply racing the track. Cat and mouse racing is Barcia's strength, and even better, he could use the 450's horsepower to his advantage against Musquin's small bore.

For Barcia, it worked perfectly. He flustered Marvin into falling in a rutted section just in front of the French crowd. That would not only allow Barcia to escape, but also Jeremy Martin to pull up to the rear of Musquin. For a few exciting laps, it looked as if Martin would also get by Musquin and really put the pressure to the French team. Musquin would rebound, however, and keep Martin's charge at bay. His ability to keep his composure after his crash was a huge factor in Team France's win, as Paulin was struggling in seventh. Leaving the first moto, the USA's 6-point tally looked strong compared to France's 11 points.

The real difference on the day would be showcased in the second and third motos. Newly crowned world champion Romain Febvre would simply be too much for anyone to match. He went undefeated for the weekend, never bested in a practice, qualifying session, or moto—and he made it look fairly easy. The only real trouble he faced was in the second moto of the day, in the form of Cooper Webb. Webb jumped out to a holeshot, just like Barcia, and tried to disappear. Febvre was just too good to let that happen, though. He methodically chased the MXoN rookie down and found a way around the brash youngster. Webb would retaliate, but Febvre just kept coming. He eventually pulled a gap on Webb and cruised home to the win, while Webb would bring home a strong second-place finish.

As for the MX2 battle, Marvin Musquin would again best Jeremy Martin, and this time would be able to keep Belgium's Jeremy Van Horebeek in between them, adding another valuable point to the score. With Febvre's win, Webb's runner-up, Musquin's third, and Webb's fifth, the two nations would enter the last moto tied if you account for each team's dropped score. It was completely up for grabs at that point.

Sitting in between motos, I was really analyzing the dynamic for what was to come. Both teams were tied. (The next nation was 40 points behind, by the way.) The matchups were interesting to consider. In MXGP, I felt that Barcia was clearly better than Paulin and would have him covered. Would he be able to match Febvre's level, though? That was a big question. Webb also looked to be better than Paulin on the day, but we had already seen he couldn't quite match Febvre in his own classification. I fully expected Febvre to win the moto, but I really thought if Barcia and Webb could go 2-3 and America could get some help from a rider like Evgeny Bobryshev, Ben Townley, or Van Horebeek, they could steal one away from the French.

The key to the whole equation was going to be the start. Barcia and Webb had both grabbed the holeshot in their respective first motos, so surely they would be up front again, right?

And that, as they say, was the difference.

Both Barcia and Webb made mistakes out of the gate and found themselves around fourteenth position, right together ironically. With Febvre jumping out front, this really was the last straw for USA's chances. On a track that was incredibly difficult to pass on, having both of our boys mid-pack would just prove too much to overcome. Paulin was just ahead inside the top ten, but even that was a big gap on the narrow Ernée course. Both Barcia and Webb would fight up through the pack, and Barcia would even get up to third position, passing Paulin along the way. Webb would pull up to the rear of Paulin on the last lap, and Barcia would get close to Townley also, but even if they had made those passes, France would have still won the Chamberlain Trophy with Febvre's 1-1 scores. Febvre simply put too much pressure on the Americans with his wins. Paulin opened the door for America with 7-5 scores, but Febvre was the eraser with his 1-1.

If someone had told me on Saturday night that America and France would enter the final moto tied, I would have absolutely taken that scenario. France had maybe its best team ever assembled and was defending its 2014 title on home turf. Everything was lined up for them to win the 2015 edition in convincing fashion. America fielded a strong team—no doubt there—but I don't think this was necessarily the most powerful lineup America has seen, either. Cooper Webb is undoubtedly a superstar in the making, but he is also new to the 450 machine. Justin Barcia is a veteran of the MXoN, but to say that he is a better rider than Ryan Dungey at the moment may not be correct. Jeremy Martin was surely the best 250 rider we had to send, but he couldn't quite match Musquin.

Having said all of that, the team we sent rose to the challenge. Barcia rode incredibly well, better than ever before at the MXoN; winning a moto overall at that event is a huge accomplishment under any circumstances. Webb's 2-6 was a great score, and usually that's enough to accompany a winning effort. Martin's 5-5 on a 250 was certainly strong, although he just couldn’t quite match Musquin's level on Sunday.

The real kicker is that in any typical year, the 16-point score would have won for the Americans. Even last year in Latvia, France won with a 17-point total, and they were incredibly strong there. Just to show how much better America and France fared than the rest of the world, Belgium was third with 56 points and Estonia was fourth with 66 points. France's 14-point score was on a level we haven't seen in a while. Sure, it had all of the factors in its favor, but the riders' performances shouldn't be discounted, nor should the Americans' for that matter. They all put on heroic efforts Sunday. As much as I hate to say it, France earned the win and should be proud. But, just for the record, if any GP journalists want to debate dominant performances by home countries, let's not forget that America's score in 2007 at Budds Creek was just 8 points.