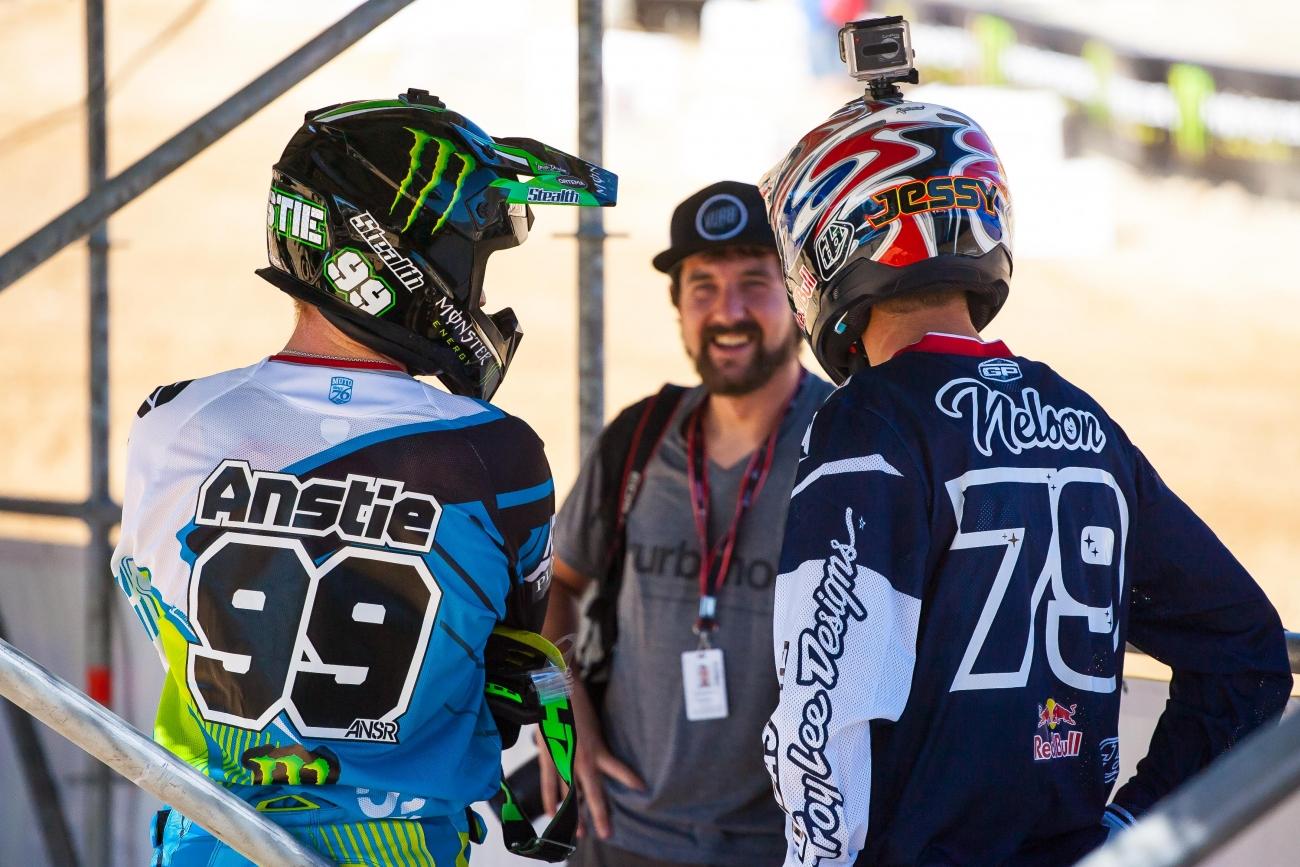 Welcome to the MXGP of USA at Glen Helen Race Day Feed. We'll be updating the feed as the day progresses, so keep checking back for the latest news as the racing action unfolds.

Josh Grant ended the MXGP of USA in style, winning the final moto of the day over world champion Romain Febvre and Cooper Webb. Febvre would win the overall with a second place finish.

Eight-time world champion Antonio Cairoli grabbed the holeshot in the second moto, but would later have to pull out of his first race back since injuring his elbow at the MXGP of Italy. Grant pulled into the lead early, but had pressure from Webb. Meanwhile, Febvre was making his way into fourth behind Evgeny Bobryshev.

While Webb was losing spots to Bobryshev and Febvre, Grant was beginning to open a small gap. Febvre would pull to within a second of Grant late in the race, but tipped over in a corner and would settle for second. Webb, who fell off the pace mid-race, made a late charge to pass Bobryshev for third.

Febvre would take the overall over Grant and Webb. Dean Wilson took fourth ahead of Coldenhoff.

Lucas Oil/Troy Lee Designs KTM’s Jessy Nelson put the final touches on a 1-1 performance at the MXGP of USA at Glen Helen with a dominating second moto win over teammate Shane McElrath and Valentin Guillod. US riders have now won consecutive GPs after Thomas Covington’s win last week at the MXGP of Mexico.

Nelson got out front early, grabbing the holeshot over McElrath, Covington and Monster Energy/Pro Circuit Kawasaki’s Chris Alldredge. On the first lap, Alldredge and Covington both went down in the same corner, ending their chances at a podium finish. Alldredge would come back to thirteenth while Covington finished seventeenth.

MX2 points leader Tim Gajser was running third early, but made a mistake on one of the steep Glen Helen hills, allowing Guillod to move into third. Gajser would cruise to an easy fourth place finish, in the process clinching his first MX2 world championship at just 18 years old.

McElrath would take second overall on the day, with Gajser rounding out the podium.

Plenty of intrigue and drama in the first MXGP moto at the final round of the FIM World Motocross Championship at Glen Helen, with Americans Cooper Webb and Josh Grant squaring off against world champion Romain Febvre.

Yamalube/Star Racing Yamaha’s Cooper Webb looked right at home in his 450 debut grabbing the opening moto holshot over Josh Grant, Antonio Cairoli and Romain Febvre. A pileup in the first corner claimed the likes of Jeremy Van Horebeek and Shaun Simpson, who had to be helped off the track. There is currently no word on Simpson’s status for the second moto.

[Update: Adam Wheeler is reporting that Simpson will miss the second moto but should by okay for the Motocross of Nations next week where he will ride for Great Britain.]

Dead leg, back bruising for @shaunsimpson24 and no second race. Should be ok for Nations. Confirmed 4th in the world

Up front Grant began to work on Webb for the lead, pushing the rookie for a few minutes before finally taking over the top spot around the twenty-four minute mark. Grant wasn’t able to cushion his lead, though, as Webb, Cairoli and a charging Febvre were all within striking distance.

Around the six minute mark Webb began to close on Grant, who slipped of the pace a bit. Webb finally made a pass stick and Grant made a mistake soon after which allowed Febvre through as well. Grant would hold on to finish third.

It was an American affair at the front of the first MX2 moto at the MXGP of USA, the final round of the FIM World Motocross Championship. Lucas Oil/Troy Lee Designs teammates Jessy Nelson and Shane McElrath combined with Monster Energy/Pro Circuit Kawasaki’s Chris Alldredge to give the United States a clean sweep of the opening moto.

Finland’s Harri Kullas would lead the pack around Talladega Turn, claiming the holeshot on his Husqvarna. Nelson would quickly take the lead, with McElrath following. McElrath’s early challenges proved futile, with Nelson pulling an early four second gap on McElrath and Alldredge, who had made his way to third. Nelson was unchallenged for the remainder of the moto, stretching his lead to just under thirteen second at checkers.

Alldredge pulled onto the back wheel of McElrath late, and finally made a pass stick around the four-minute mark. He would go on to finish second with McElrath in third.

MX2 title contenders Tim Gajser and Pauls Jonass fell of the pace late in the moto after engaging in heated battle for fourth early. Gajser dropped back to sixth, while Jonass held on to tenth.

The battle for fourth came down to the last jump (literally) as Max Anstie clipped Valentin Guillod by less than a second to take the spot.

American Thomas Covington crashed while running inside the top ten and finished twelfth.