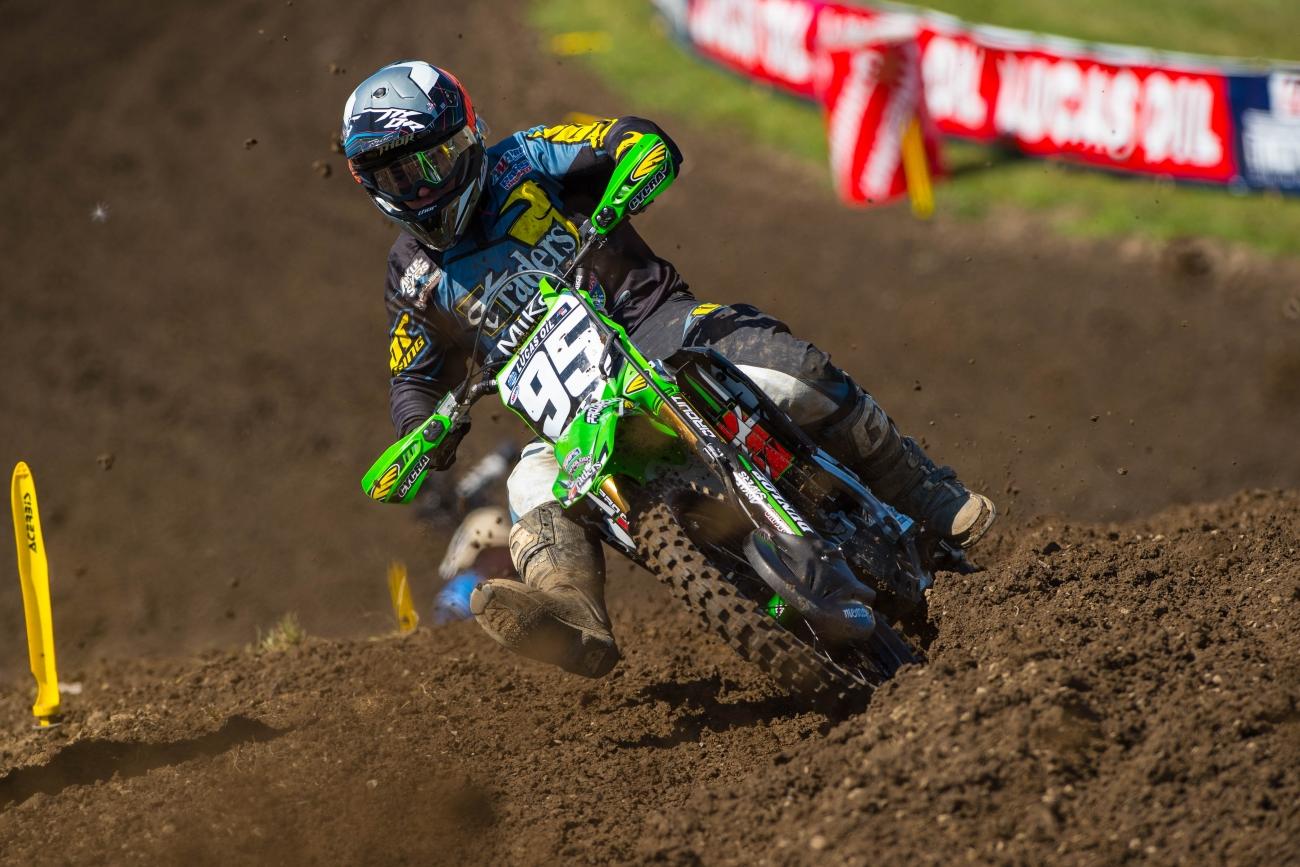 Rookie seasons can go one of three ways: contending for podiums and wins; struggling to find the right speed, fitness, and settings; or succumbing to injury and possibly re-injury as the season wears on, which causes an uphill battle that is hard to overcome.

In the case of Traders Racing Kawasaki’s Nick Gaines, his rookie season matched that of option three. The Monster Energy Supercross season didn’t go as planned for the Georgia native, as he struggled to find a flow in the first few rounds of the 250SX East Region and failed to qualify for Arlington and Atlanta 2. Gaines showed flashes, but was prone to crashing. His best result came at Atlanta 1—a seventeenth-place finish.

“We had a lot of ups and downs,” Gaines said. “It wasn’t too good, but honestly it wasn’t that bad either considering the things that happened to me.”

Gaines is referring to two injuries he sustained through the duration of the 2015 season. The first, a broken scaphoid bone in his wrist that occurred during his heat race in Indianapolis, forced him to miss the remaining four rounds of the series.

He was initially given a timeframe of four to six weeks with the cast, and was scheduled to start riding outdoors once out of it, but he decided after five weeks he wasn’t about to let some plaster hold him back.

“I just cut the cast off with a pair of pliers and just tried to work my wrist,” Gaines said. “It’s healthy now, so it worked out, but it was definitely not strong going into outdoors.”

Gaines said he felt more comfortable during this period of riding than he had the entire season, and he was very excited for the start of the Lucas Oil Pro Motocross Championship. Two weeks before the season opener at Hangtown, Gaines suffered another setback when he injured his back during the Thor catalog shoot.

Instead of sitting out, Gaines decided to fight through the pain and attempted to race Hangtown. He didn’t have any strength in his back, so he pulled in after completing two laps in the first moto. He would miss the next two races at Glen Helen and Thunder Valley.

“It just happened. Then I started feeling good again, and then it happened again,” Gaines said. “It was another long setback and I was watching all of the races on TV and it was just a bummer.”

“The off-season is just boring. The time off is good, but all you think about is wanting to go back out there and ride again.”

Gaines returned to the series for good at the Tennessee National, and two rounds later at Budds Creek he would have his best result of the season with a twelfth overall.

“That weekend at Budds Creek, everything was going perfect,” he said. “The rain never makes me mad and I love to ride in the mud. It was crazy, though; I had two bad starts, but I stayed up and took nice lines. I ended up getting my best overall of the year.”

Gaines had an up-and-down season as the summer wore on, but he turned it around in the final three rounds. He scored points in five of the last six motos and finished twenty-fourth in the final 250 Class standings.

Did he reach his goals that he set out to accomplish this season?

“Honestly, I didn’t,” Gaines said. “That wasn’t what I wanted to do. I obviously wanted better than that, but it is what it is. I was hoping to finish in the top twelve or ten when the season started, then work my up. There is always next year, and that’s what I’m going to try to do.”

Gaines knows what he needs to focus on for the 2016 season, and will start by finding his flow on a supercross track. He knows all too well that he can’t just hold it wide open and hope for the best.

“I tried that a couple times, [laughs] but it just doesn’t work out for you. I’ve got to work on that for next year.”.

As far as the long haul of the season is concerned, supercross isn’t all Gaines will focus on. He has quite a laundry list of things he wants to work on during the short off-season.

“Starts are crucial and then sprinting the first couple of laps,” he said. “I also want to work on being very calculated and adapt to the tracks quickly. I need to work on the whoop sections because those things put me on the ground a lot. That’s what I’ll be working on for the rest of the off-season.”

Gaines said he hopes to return to Traders Racing Kawasaki for next season, and is very close to working out a deal to return alongside teammates Justin Starling and Tony Archer. Before the end of his current contract, Gaines still has two more local races with the team.

“The off-season is just boring,” Gaines said. “The time off is good, but all you think about is wanting to go back out there and ride again.”