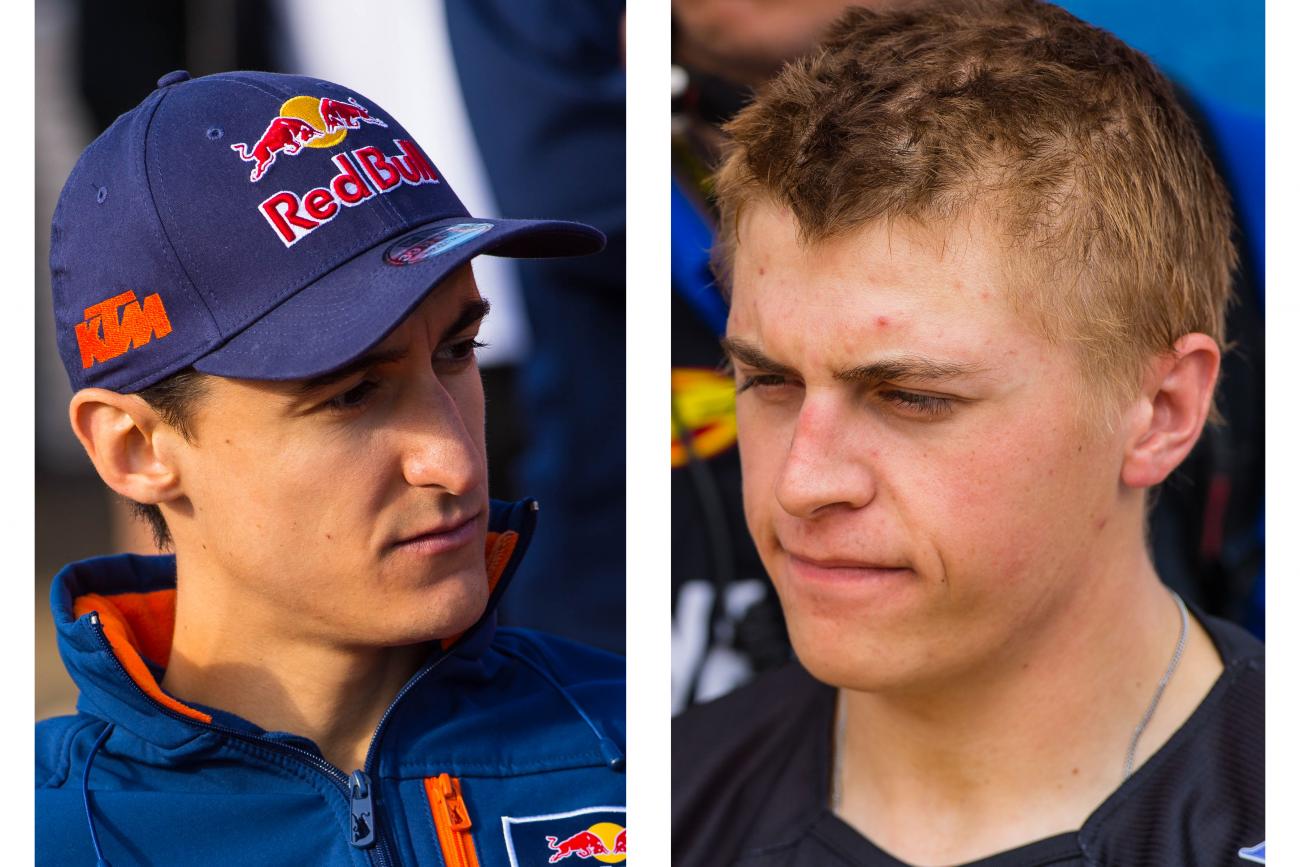 Usually at this point in the season, someone’s made a break for it in the points, but that just hasn’t happened in the battle for the Lucas Oil Pro Motocross 250 National Championship between Marvin Musquin and Jeremy Martin. The points have consistently swung back and forth, and last week a couple of crazy motos still produced no change! But this Saturday it ends, and one rider will be crowned champion. With a 2-point lead, Martin holds a very slight advantage. In the event of a tie, the championship would go to Martin, who currently has five wins to Musquin’s three (and yes, last weekend’s 3-1 against 1-3 tie tipped to Martin, and that makes the difference between Martin having more overall wins. Martin only got that third because RJ Hampshire crashed in the last turn of the first moto. In other words, every point counts!) This is the battle to watch, and the only guarantee is that it’s going to be hard fought. –Aaron Hansel

Talking about Martin’s teammate Cooper Webb here. He’s shown he’s got the speed to beat both Musquin and Martin on the right days, but what will he do if the championship is coming down to the wire? Will he help his teammate if he’s in a position to do so? It certainly looked as though he let Martin by last week, but Martin clearly had a faster pace and probably would have beaten Webb anyway. What if Webb’s faster in Indiana? Will he beat Martin this weekend even if it comes at the expense of a championship for his team? With Webb you never know, but we do know if a situation like this arises, the Internet is likely to explode. –Hansel

The Other X Factor

Aaron Plessinger hasn’t quite been on the same level of the frontrunners this year, but he has been very fast—he was third in a moto at Unadilla and has been coming on very strong in the second half. He probably won’t run Musquin down this weekend, but if he gets a better start than Musquin, you know he’s not going to let the KTM rider by without a fight. After Utah, Musquin even said he felt like Plessinger was going out of his way to get in his line. This dynamic could prove valuable to Martin in his bid to back up his 2014 250 Lucas Oil Pro Motocross Championship. –Hansel

We know who might be able to help Martin, but who can Musquin count on for help? His teammate Justin Hill is out with a broken finger, which leaves Jessy Nelson as the most likely KTM rider to lend Musquin a helping wheel if the situation calls for it. But will he? “Nothing has been said, but if I can help out by separating the two by a few positions, I'll do my best to do so,” Nelson said when asked about it. “But Jeremy is one hell of a competitor, and that fight is between the two of them. Hopefully KTM can bring home another championship.” –Hansel

In addition to a pair of fast teammates, Jeremy Martin’s also got his brother Alex out there, who is wrapping up the best season of his career. But Alex is more than Jeremy’s brother; he’s a professional too, so it isn’t likely he’ll be intentionally making any moves that leave Musquin in the banners. “I'm definitely going to try my hardest to beat him [Musquin] and give Jeremy as many points as possible, but taking him out or hurting him is not an option,” Alex told us. “If my brother wants to win this thing, it's up to him to do it the right way. I don't believe in that type of racing.” –Hansel

Championship by the Numbers

Exactly how close has this title battle been? The biggest points lead reached just 19 (and both held leads of this size). Not only are the two front-runners close in points, but in every statistical category they match up nearly identical. Let’s take a look at how we got to this point.

As we mentioned above, the biggest lead this season has been 19 points. Martin has held the red plate for five straight rounds, and seven overall. Last week in Utah was the first week all season they tied in points.

Jeez. Can you say close?

Starts will be extremely important this weekend, and there is a stark contrast between Martin and Musquin. Since Unadilla, Martin has averaged an 11.5 start (after lap one) compared to a 5.25 start for Musquin. Prior to Unadilla, Musquin was averaging a 4.0 start compared to 7.4 for Martin. In the last four motos, Musquin is averaging a little over six positions per moto on Martin. On paper, the poor starts haven’t affected Martin much, as he’s averaged a 2.5 finish just behind Musquin’s 2.25. While we can’t predict what good starts would have done for Martin, we do know he needs to get off the gate better this weekend to relieve some pressure. –Stallo

There were certainly tracks on the schedule this year that played to the favor of both Martin and Musquin. Technical tracks play into the smooth, calculated style of Musquin, while the rougher a track gets, the better Martin seems to perform. Ironman Raceway, located in the small town of Crawfordsville, Indiana, an hour west of Indianapolis, plays host to the final round in just its second season on the circuit. Before the floodgates opened a season ago, what we saw of the track on amateur day looked fantastic. It featured huge elevation changes, and the sand that was mixed in led to rough conditions that formed multiple lines and choppy braking bumps. The track also appeared to be quite technical. Neither Martin nor Musquin is familiar with the track or conditions, as the rain came heavy and hard early in the morning last year, so the track could be a toss-up this weekend. –Stallo

Yes, Yamaha men Cooper Webb, Aaron Plessinger, Alex Martin, and the KTM boys will certainly factor into the race in some way. One other rider to keep an eye on is Joey Savatgy. While the Unadilla overall winner doesn’t necessarily have a dog in the fight, he is definitely capable of running up front and putting positions between the title combatants. Since Spring Creek, Savatgy has finished ahead of either Martin or Musquin three times. Plus, he and Zach Osborne are locked into a battle for third in points (Savatgy has just a five-point edge) so he needs to race as hard as he can. With his prior success at the track—second overall a year ago—Savatgy could play spoiler this weekend. –Stallo

There is a lot of historical significance tied into this championship for each rider, his respective manufacturer, and team.

If Martin wins… He would become the first Yamaha rider to successfully defend this title since Broc Glover in 1979. His win would also mark the second AMA Motocross 250 championship for his team, Star Racing. (He claimed the first for the team in 2014.) The win would also give Star Racing two of the three major titles in the 250 Class in 2015, as his teammate Cooper Webb won the Monster Energy Supercross 250SX West Region Championship. (Also a first for Star Racing.)

In Musquin wins… He would become the first Frenchman to win the AMA 125/250 Motocross title. Pourcel and Stephane Roncada came close, but never sealed the deal. His win would also give KTM four of the five major championships in 2015, as Ryan Dungey won both the 450 SX and MX championship and Musquin won 250SX East Region. –Stallo