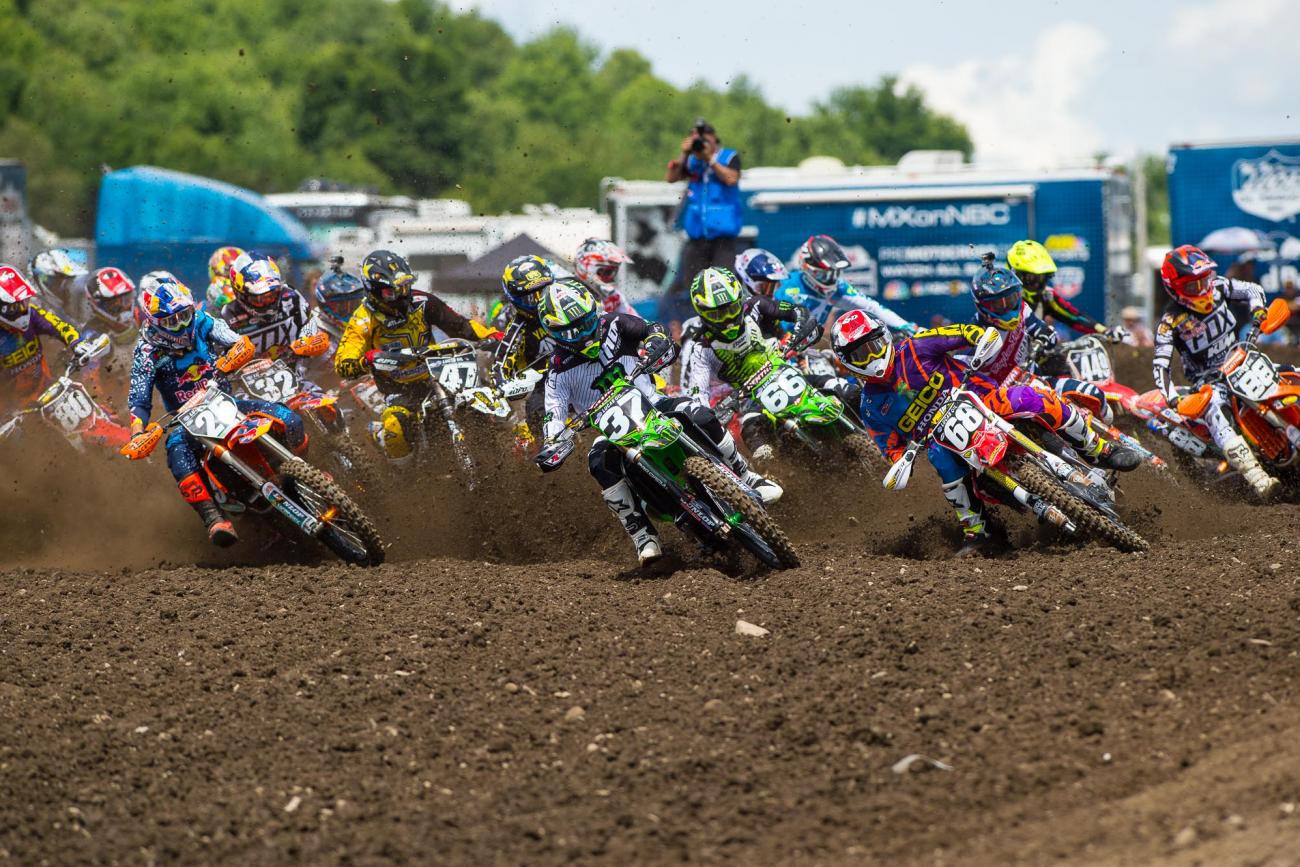 Round ten of the Lucas Oil Pro Motocross Championship took place in New Berlin, New York at the famed Unadilla Valley Sports Center. The weather was perfect and it even got overcast towards the end of the day, which gave riders some relief. The track wasn’t ripped as deep as it has been in the past, which made less rough than usual according to many riders. It still had its moments, as the ruts on the jump faces made for some tense moments in both motos.

Prior to the start of the first 250 moto, Team USA was announced for the 2015 Motocross of Nations taking place in late September in France. It’s an all Yamaha squad of Justin Barcia (MX1), Cooper Webb (Open) and Jeremy Martin (MX2). Webb will make the jump to the 450 for the race.

Red Bull KTM’s Ryan Dungey had himself a great day. Bowing out of the MXoN because of his hectic schedule (after six-straight years of service for Team USA), Dungey went 1-1 on the day and stretched his 450MX lead to 79 points. He’ll likely clinch his third 450MX title next weekend in Utah. Dungey passed his way into the lead early in both motos and although he was pushed by Jimmy John’s/Soaring Eagle/RCH Suzuki’s Ken Roczen in the second moto, he held it together to make it a perfect day.

Speaking of Roczen, he went down in the first turn in the first moto with fastest qualifier Rockstar Energy Racing Husqvarna’s Christophe Pourcel and was forced into the mechanic’s area for quick repairs. He charged hard after and salvaged sixteenth. In the second moto it was the “old” Roczen as he put heat on Dungey. The German had a nice little double jump he was doing before the uphill and was gaining a lot on Dungey there only to see Dungey put time on him on the front part of the track. Although he went 16-2 on the day, the second moto has to give Roczen hope, as it was his best run in several weeks.

Justin Barcia took second overall via 2-4 scores but wasn’t very happy after the race. The native New Yorker thought he should’ve been much better and said so on the podium. He was up to second behind Dungey pretty quickly in the first moto, but couldn't match Dungey's pace. In the second moto he was second again but Roczen and Pourcel got around him. Barcia said he made a bike change for the second moto after the disappointment in the first race, and he felt that he actually made things worse. Third overall was Honda HRC’s Trey Canard with 3-6 rides.

Surprise of the day was Hitachi KTM’s Shaun Simpson. Simpson normally races the FIM World Motocross Championship but decided to race Unadilla with a break in the schedule. Well, his “fun trip” turned into strong 4-8 scores for fourth overall. He pitted with the factory Red Bull KTM team and got to ride one of their bikes. The Scotsman qualified well, got great starts and showed a lot of speed in his first ever American national. He told us he'd be top five in a dream scenario--and he actually exceeded that dream with fourth.

The series saw a couple of riders coming off injuries and making their debuts in the 450 Class. Justin Bogle, returning from a shoulder injury at Hangtown, hopped on Eli Tomac's vacant GEICO Honda CRF450R. He ran third most of the first moto before finishing tenth. In the second moto he grabbed the holeshot before crashing twice, the second one pretty good, which caused him to pull out of the moto. Still, Bogle's speed in his first race on the big bike was impressive.

Red Bull KTM’s Dean Wilson also made his return after tearing his ACL and MCL in January. Wilson got arm pump in the first moto but settled into a good pace in the second moto. If he hadn’t let RCH Suzuki’s Broc Tickle get by him on the last lap of the second moto, he would’ve been eighth overall. As it was, that pass put him into tenth.

Rockstar Energy Racing Husqvarna’s Jason Anderson was very, very fast, but once again crashed or got terrible starts and wasn’t able to put together two motos. He was at times one of the fastest riders on the track in both motos but just had 7-14 finishes to show on the day. As we mentioned above, his teammate, Pourcel, a former winner at Unadilla in the 250 Class, was the fastest qualifier but crashed in the second turn with Roczen and wasn’t able to get back into points. In the second moto he was a strong third. He finished twelfth overall on the day.

In the 250 Class, it was Monster Energy/Pro Circuit Kawasaki’s Joey Savatgy taking the first national win of his career with consistent, and fast, 2-2 finishes. It was the first win from Pro Circuit in 2015.

Marvin Musquin had a tough first moto with a crash and a goggle issue. The best he could do was fourth. In the second moto he took the win after some heavy heat from Cooper Webb. In fact, both riders turned their fastest laps of the moto after the thirty-minute mark. Musquin made up two points on Jeremy Martin on the day and the gap is just two points with two round remaining.

Webb had a tough day. After being named to Team USA earlier in the day he got a bad start in the first moto and also crashed. In the second moto he was charging hard, trying everything he could do to get by Musquin (even making contact at one point), before casing a double and bouncing to the ground with just two laps left. He finished the moto twenty-third and twenty-first overall.

After winning the first moto, points leader Jeremy Martin was buried outside the top ten on the start of the second moto and could only work back to fifth. He finished third overall in front of Jessy Nelson, who went 6-4.