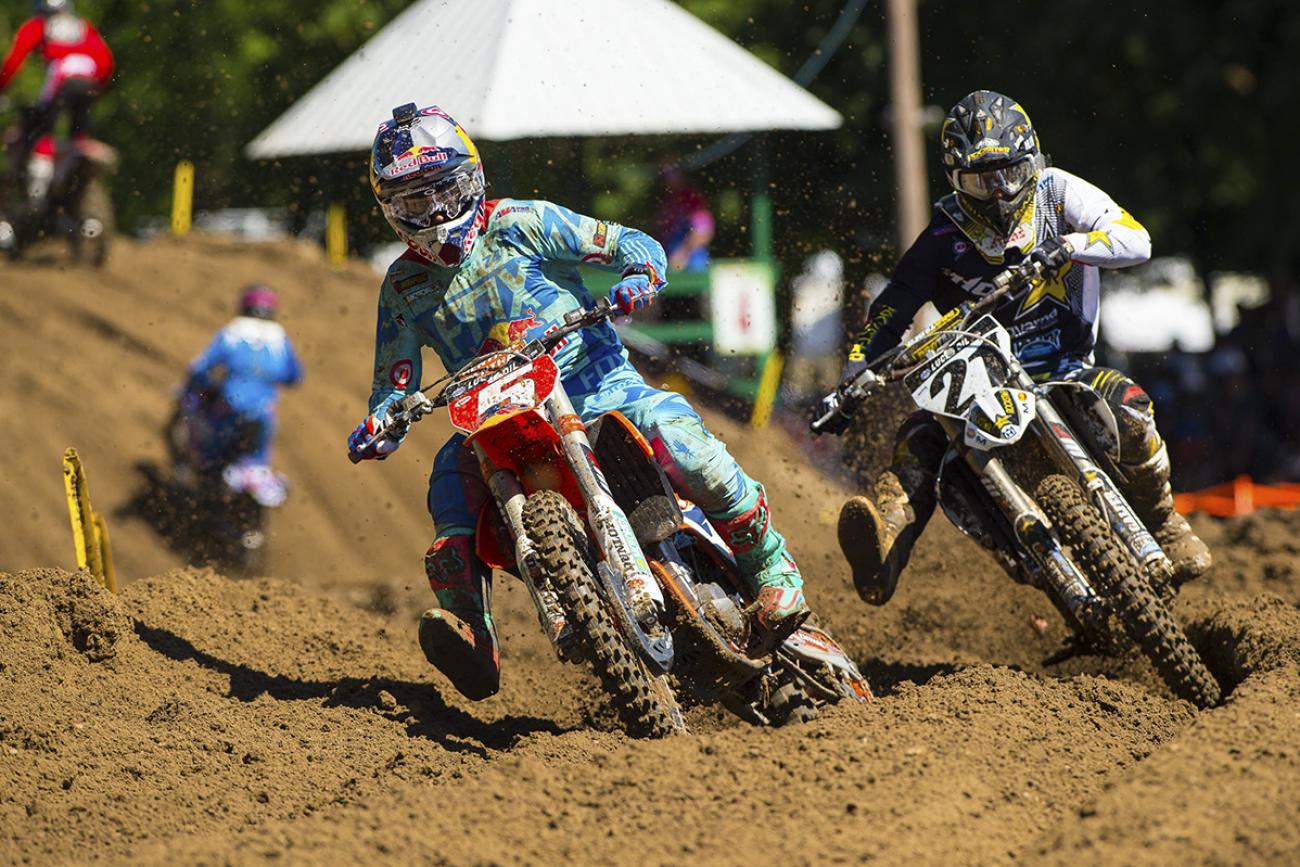 Down hill Dungey. Maybe Ryan has earned a new nickname after using the massive down hills at Spring Creek to capture the second moto win and the overall—his first since the Tennessee National in early June. It was Dungey’s first overall since 2012 at Spring Creek.

Justin Barcia, seeking a third consecutive overall, pulled a half a wheel on Jason Anderson to capture his second MotoSport.com holeshot of the day. Dungey quickly moved past Anderson to pull to the rear wheel of Barcia. Using the steep down hill, Dungey was able to gain time on Barcia before finally making a pass on, you guessed it, the down hill. While he didn’t runaway, Dungey slowly put distance between himself and Barcia. He would win the moto by just over 5 seconds. Blake Baggett passed Ken Roczen late in the moto to secure second—and secure the final podium spot. Barcia would finish second overall.

Jeremy Martin was not going to leave his home track empty handed. Martin blasted around the right hand start to claim the MotoSport.com holeshot. Even with his teammate, and first moto winner, Cooper Webb breathing down his neck, Martin pulled away early in the moto, pushing his lead to over fourteen seconds at the halfway point in the moto. Martin would go on to win the moto by 25.182 seconds.

The moto was Martin’s, but the overall belonged to Webb, who rebounded from mistakes late in both motos at RedBud to win his first overall since the Tennessee National a year ago. Martin may have lost the overall, but he gained twelve more points in the championship on Musquin and now sits nineteen clear heading into Washougal.

Joey Savatgy held on the rear-wheel of Musquin for much of the second moto, but could never find his way back around. He held on for fourth over Jordon Smith in the moto to claim third overall on the day.

Ryan Dungey looked right at home in the first 450 moto of the day, using an early Justin Barcia mistake to take a step closer to ending a two-year losing streak at his home track. The moto win was Dungey’s sixth on the year.

It was the JGR duo of Barcia and Phil Nicoletti leading the charge early. Barcia, seeking his third consecutive overall, appeared to tuck the front end in the mud on the first lap, allowing Dungey to close on the lead, and eventually make the pass. Dungey’s lead was never in danger as he stretched it to over four seconds by race end.

RedBud should have belonged to Cooper Webb. Instead, it was teammate Jeremy Martin that went into the break with a 1-1 performance and the red plate. Cooper bounced back today at Millville taking the first moto win on Martin’s home turf. It was Webb’s first win since moto one at Millville a year ago.

Rookie RJ Hampshire snuck around the tight right hand corner to take the MotoSport.com holeshot over Marvin Musquin and Alex Martin. While Alex was left picking up the pieces of an early crash after clipping the back of Kyle Peters’ rear-wheel, [Update: Alex clipped the back of Marvin Musquin, not Kyle Peters] Musquin was making a statement, passing Hampshire for the lead. Musquin, in need of points following a disappointing RedBud, crashed soon after taking the lead and had trouble getting his front wheel unstuck from the mud. Another mistake later in the race led to an eighth place finish for Musquin—and the loss of valuable points.

Something must be said for Jeremy Martin’s performance. Jeremy lost his clutch on the third lap and managed to pull to the rear-wheel of Joey Savatgy for second on the final lap, before falling short of the runner-up spot.

How much is home track advantage worth? Apparently three seconds. If anything had a chance of slowing 250MX points leader Jeremy Martin, it was the overnight thunderstorm that led to a muddy first practice session. Despite conditions in the first session, Jeremy would set the fastest time with a 2:37.780. The sun would eventually rise, drying out the track for the second session and Martin would improve his time by more than fourteen seconds—dropping to a 2:24.117. It was far and away the quickest time, besting Marvin Musquin (2:27.303) by just over three full seconds. Joey Savatgy was third in practice, more than four seconds back of Martin.

Ryan Dungey’s march to the Bud Light Fastest Qualifier wasn’t nearly as easy as Martin’s. At his home away from home, where he won five consecutive times from 2008-2012, Dungey put down a late hot lap to clip Jason Anderson by less than a second. Christophe Pourcel, Anderson’s teammate, was third with a 2:23.36.

Justin Barcia, winner of consecutive overalls was fourth with a 2:24.710. In his debut with Monster Energy Kawasaki Josh Grant was fifth overall in practice. Ken Roczen, Broc Tickle, Blake Baggett, Weston Peick and Cole Seely were top ten. Seely left practice early on the Asterisk Medical Unit. Follow us on Twitter (@racerxonline) for the latest on Seely.

[Update: Seely injured his shoulder in practice and will not race this afternoon. He will undergo further evaluation on Monday to determine the severity of the injury.]

Due to overnight weather, the Consolation Races have been cancelled today. The top forty from each practice qualify.

Lucas Oil Pro Motocross returns from its second bye week to a home race, of sorts, for some and literally for others. Spring Creek MX Park located in the small town of Millville, MN, home to a population of around 200, has been hosting races since 1983. Since 1987 John and Greta Martin, parents to Alex and Jeremy, have hosted the race, that is literally a home track for the boys—they walked to the track this morning. For others, it just feels like home.

Ryan Dungey, from nearby Belle Plaine, made his pro debut here on August 13, 2006, finishing seventh overall. Two years later, he captured his first win in the 250 Class with a 2-1 performance, edging out Ryan Villopoto. It was a sign of things to come. The win kicked off a run of five years in which Dungey won at Spring Creek (250 Class 2008-09; 450 Class 2010-12). He was unstoppable at his home track, or so it seemed. The past two seasons Dungey has come up short of the overall with James Stewart and Eli Tomac taking wins. Only three people have beat Dungey (in the overall) since 2008—Stewart and Trey Canard in 2013 and Tomac in 2014—and all three will not make the gate this weekend. (Tomac and Canard are out with injury while Stewart is still serving a sixteen-month suspension.)

While Dungey’s grip on the championship title isn’t in imminent danger—he is still forty-four points clear of Ken Roczen—holding off a red-hot Justin Barcia may provide the biggest hurdle if Dungey were to pick up a sixth career win at Spring Creek today. Barcia has won consecutive overalls dating back to Budds Creek—the first two of his 450MX career—and has moved to within nineteen of Roczen for second.

In 250MX, Jeremy Martin and Marvin Musquin continue to trade blows. Through seven rounds, the points lead has switched hands between the two on four occasions, with neither rider holding the red number plate for more than two consecutive rounds. Jeremy retook the lead by seven with a come-from-behind 1-1 performance at RedBud. Jeremy returns home looking to capture a second consecutive win at the track.

Overnight rain could interrupt the schedule. There is a chance that the consolation race will be cancelled, with the top forty from practice making the main. No decision has been made as of this morning.

You can watch all the races on MAVTV (first motos) and NBCSports (second motos) as well as the live and free stream here at Racer X Online and www.promotocross.com. Race time is 2 p.m. Eastern, with the 250s going off first, then the 450s.