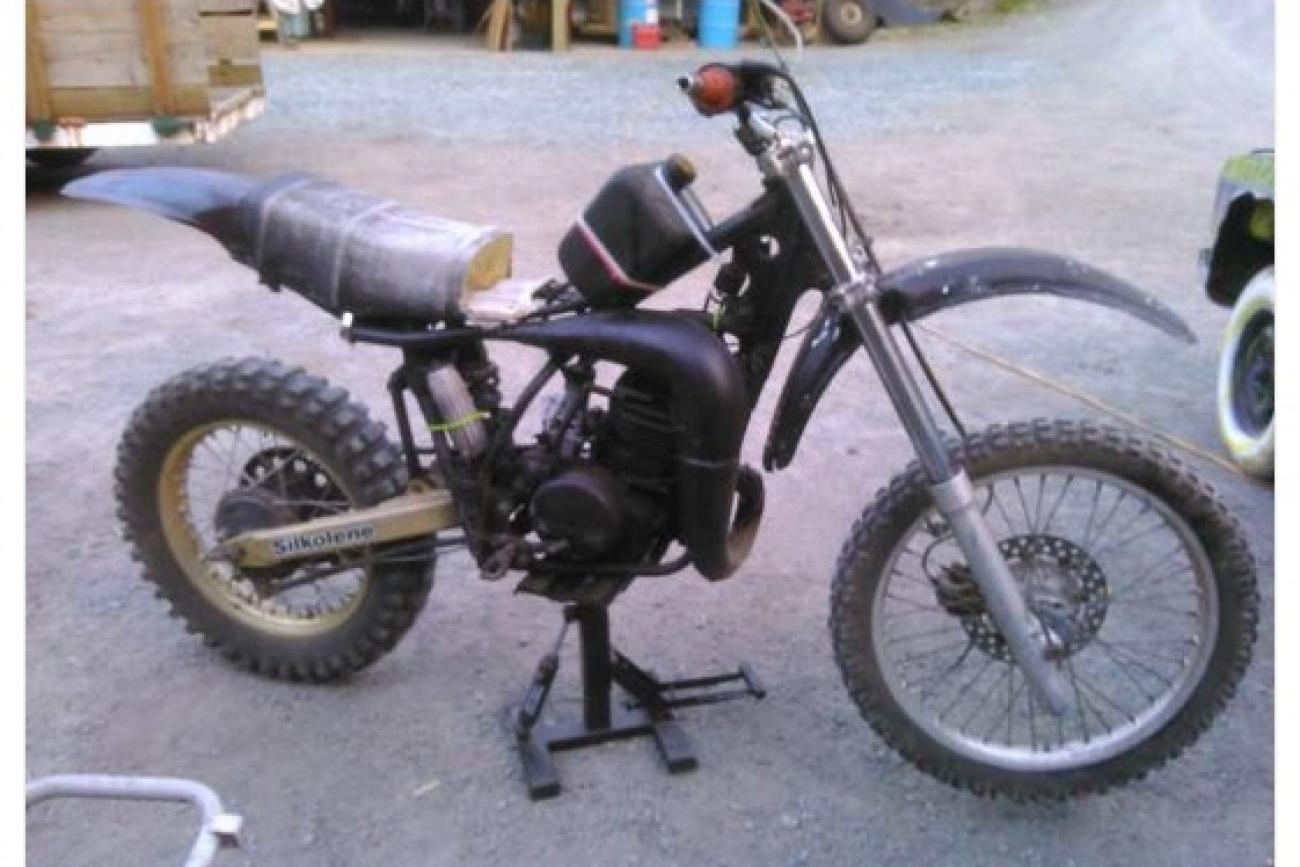 The Shadow knows what evil lurks in the hearts of men, but if you’re a regular reader of this column, or have ever searched for a used motorcycle on Craigslist, so do you. Criminal trike conversions, shameful selling prices, sinful spray paint, and revolting rust are all part of the wickedness and vulgarity of trying to find a decent unit on Craigslist. To prove it, here are three examples of two-wheeled iniquity.

You’ve probably heard the term “basket case” when referring to a haggard motorcycle, but you may not know its origins. Well, it’s in reference to someone bringing a motorcycle to a mechanic to work on in a basket because they started the project and either got in over their head or lost enthusiasm halfway through. That’s what’s going on here. There isn’t even a picture of the bike assembled! Let’s break down the list of parts the seller says are literally still in boxes.

Breakaway levers: At some point we’ve got to stop calling folding levers breakaway levers. They don’t actually break away, and if they did, what would be special about them? Perhaps the seller is just being sneaky and has stock levers, which are technically breakaway levers when you crash.

Pivot Works linkage bearings: Which you’ll probably need to replace again, soon. It’s hard to tell because the pictures are so blurry, but it doesn’t look like the linkage was masked off where the seals sit. No biggie, it’s not like you need a proper surface for a seal to prevent dust and water from passing.

Over $100 in OEM bolts: Original bolts are great, but you’ve got to ask why this guy is missing so many bolts to begin with. LNBC (loose nut and bolt check) much?

Transmission parts: How about you clarify which parts? It’s not like assembling split cases is a complicated job that has to be done perfectly for everything to work right.

Crank: Okay, time to hit the panic button. What kind of horrible past does this engine have that it needs a new crank and new transmission parts? This engine is going to be like an abused animal—it’ll never be the same as it once was and sooner or later you’re going to get bitten.

YZ Track Pack bolt pack: Perhaps you should have thought of this product when you were dropping Benjamins on factory hardware?

Frame guards: I used to run frame guards on my steel-framed machines, and to tell you the truth, I never really knew why. Maybe to protect the paint I was covering up?

TM Designworks chain roller and case saver: A case saver, hmm? Things are beginning to clear up a bit now.

Works Connection master cylinder cap: Again, why does this need replacing to begin with?

Restyled 2010 YZ plastics: I’m not sure about this particular scenario, but drawing on my time spent working in dealerships, I can tell you trying to ram updated plastics on an older bike, especially one seven years removed, always makes a bike look like a wheel that’s missing a hubcap.

Is it 2015? Okay, just checking, because judging by how blurry these pictures are, I thought I was back in 1997. Where do you even get a camera with resolution that bad? A museum? And the paint… My god, the paint. If you absolutely have to change the color of something on your dirt bike, do it the right way and powder coat it. Second of all, don’t ever paint a rear shock for any reason, and if you do, TAKE THE SPRING OFF FIRST! If this bike is ever put back together, it’s going to look like a page out of my 3-year-old’s coloring book.

You knew you couldn’t make it through a Classic-Fieds without some plastics that have received a heavy dose flat black spray paint, and this is a fine example of the type of bike that typically receives this heinous makeover. And check out the seat. The cut is too clean to blame on rot—someone did that on purpose. It’s hard to imagine a scenario where what existed before was worse than leaving your crotch exposed to hard metal and a blistering exhaust pipe. Perhaps a mutant, air-breathing piranha had taken up residence there?

Next up is the fuel cell. If you’re talking about a truck or cool 4X4, having an accessory tank would be a good thing, but when it’s on a dirt bike in place of the original fuel tank, that’s not so good. Especially when it’s held on with what appears to be a zip-tie and one of Uncle Sam’s suspenders. Hey, at least the tank has been painted flat black to match the rest of the bike. And how about that shock reservoir that’s securely fasted with a zip-tie? At least, we think it’s a reservoir. Judging by the rest of this machine, it could just as easily be a sawed-off tall can of Schlitz that serves as a makeshift dip receptacle.

Usually, we’d say a dollar per CC asking price is a good deal, but in this case it’s about $250 too much for this crotch-fire in the making. You’d be safer, and probably faster, aboard the junk bike sculpture in front of Glen Helen.

Much like the seller has put a lowered price on this sinful collision of scooter and trike, you’d have to have significantly lowered expectations to fork over any amount of money for it. The sales pitch makes it sound like he built this thing himself, which is a scary thought because it doesn’t sound like he’s had much experience in the wrenching department. Check it out:

Hello again, I have posted this on here before and had a lot of inquires and offers of trade, but none ever fell through. I have here a 2012 reverse trike scooter. It is 150cc, but is souped up with performance parts that make it have way more get up and go than a normal 150cc. This has no trouble at all pulling me around and I am a pretty big guy. No problems going up hill or anything. This thing is a BEAST! I have had no problems with it at all since I finished it and it rides like a dream. It is inspected and can be driven anywhere. Its also made to be a dirt and street trike so you can even take this to the trails and ride it around. The trike is like a reverse trike ruckus so if you are a fan of those this is right up your alley and even looks cooler and has way more get up and go than a normal ruckus scooters and has the reverse trike style that most cyclist really like. I am wanting $1600 which is pretty fair seeing that I have put more than that into it, but will take any reasonable offer. Please dont low ball me I have put a lot of effort into this trike and only selling because I need another vehicle to transport my family. I will also consider any trade offer as long as it adds up to 1600 in value or more. Best things to offer as trades would be (car, van, two or more seated trike, rat rods, Boats, land, to much to really list) just let me know what you got to offer even open to trades and cash. I do not have a phone atm, but you can email me anytime and I am always checking my email so I will respond fairly quick to all messages. If you have a trade please send me pictures of all offers.

Is it just us, or would someone who has even a little experience with motorcycles ever refer to this moldy sack of bread as a “a beast”? He says he’s got over $1,600 into this thing, which, if true, is insane. How long do you think something would last that’s built by someone dumb enough to sink over $1,600 into a useless pile like this? He says he’s only selling it because he needs another vehicle to transport his family, but we’re fairly certain his “family” of nine cats and a hamster would fit in a couple well-placed baskets mounted on the fenders. Furthermore, if he really wants something to tote a family around in, why would he want to trade for a “car, van, two or more seated trike, rat rods, boats, [or] land”?

Thinking about buying this thing? Do yourself a favor and double-trampoline-bounce that thought out of your head.