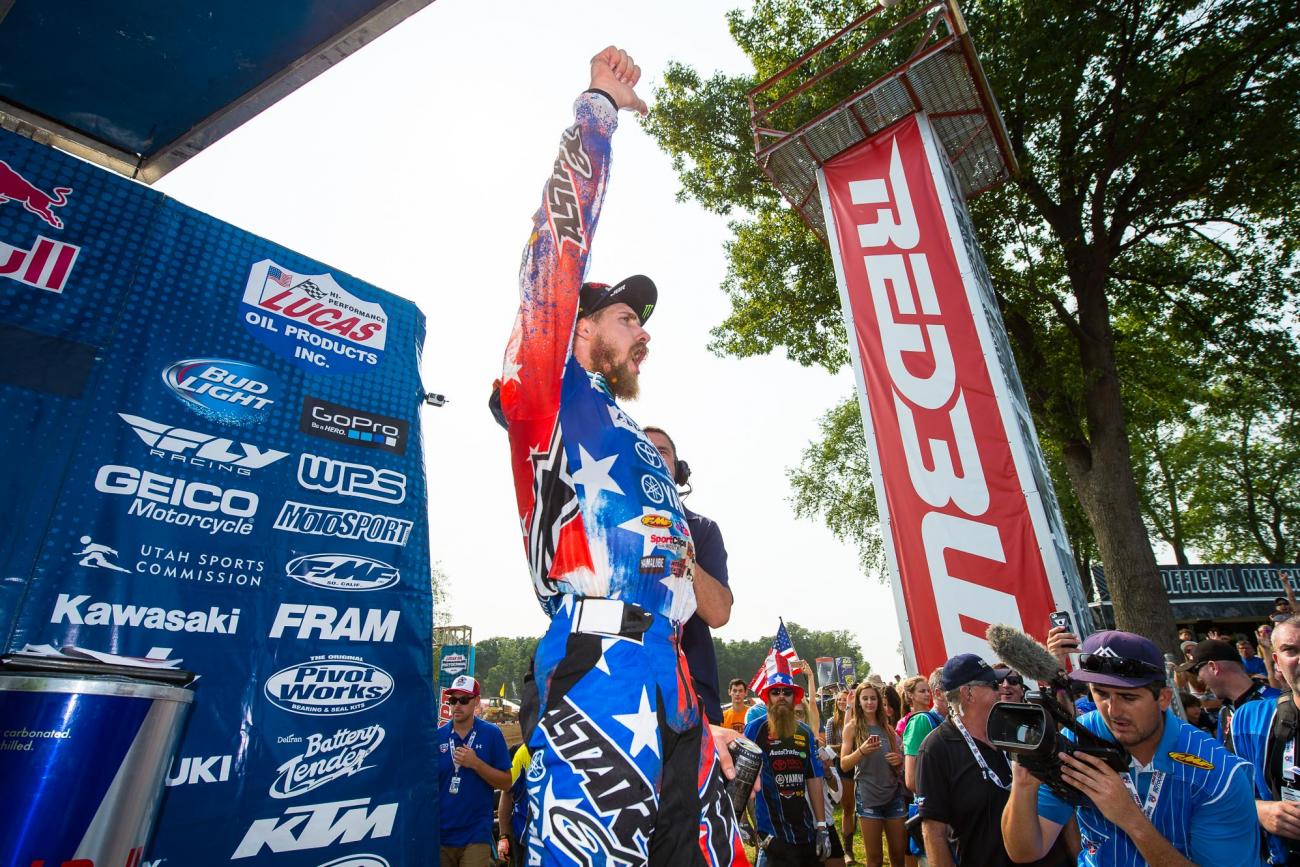 We knew Justin Barcia would get a boost of confidence after his victory last week at Budds Creek, but this was perhaps a bigger jump than anyone expected. Forget anything about mud racing at Budds Creek, Barcia straight-up took down Ryan Dungey and the rest of the 450 pack under perfect conditions at RedBud for his second-straight overall win. The two 450 motos were eerily similar, with Barcia holeshotting both on his Autotrader.com/Toyota Joe Gibbs Racing Yamaha, and Dungey quickly slotting into second in both races. They matched each other lap for lap for most of the day, but in the first moto Dungey put in a charge at the halfway mark and struck down the inside of a downhill to pass Barcia for the lead. Barcia fought back but couldn’t pass the series’ leader back, and ultimately took second. In moto two, Barcia led Dungey again but this time held Dungey’s repeated charges at bay. They stayed within two seconds of each other the entire moto. Make no mistake, Dungey wasn’t points racing, he was going for the win, even getting uncharacteristically sideways in spots as he tried to find an edge. On the last lap, he finally got to Barcia’s rear wheel, but Barcia didn’t falter and hung on for the moto win, giving him a 2-1 for the overall. Kids, if you could figure out how to bottle confidence and sell it, you’d have retired already.

“That was probably the hardest win I’ve ever had,” said Barcia in the post-race press conference. “Ryan was just there the whole time. Second moto was gnarly.” While Barcia appears to have made a sudden turn around, he says it has really just been a series of small changes, or “pieces of the puzzle” as he says, that have led to the change. He likes his bike now, he credits his new riding coach Buddy Antunez, and his training program, which he now manages himself alongside his mechanic Ben, who isn’t afraid of a bicycle ride. Altogether, a remarkable turnaround for Barcia, who appeared to be heading toward a lost season at one point. “We’ve righted the ship now,” he said.

Dungey was solid in second in the second moto, not making excuses and giving Barcia credit. “Track was tough today, not sure why but the bumps formed up differently than I expected, they were more square and edgy,” he said. “Not to take anything away from Justin, he rode great. Big picture the day worked out good for us but we’re always trying to get the win.”

Dungey did extend his points lead because Ken Roczen had another off day based on his usual standards, going 3-3 for third overall. Roczen didn’t make excuses either and just basically said he has work to do. His starts were quite there with Barcia and Dungey, but he also had time to get to them and couldn’t make it happen. In the first moto he and Soaring Eagle/Jimmy John’s RCH Suzuki teammate Broc Tickle worked through the pack together, picking off JGR Yamaha teammates Phil Nicoletti and Weston Peick to finish third and fourth. In moto two Roczen had his hands full with Christophe Pourcel as spent most of the moto in fourth. He finally got around the Frenchman late to take third, but was never in contention to take wins away from Barcia and Dungey. Tickle took seventh in moto two, and the 4-7 scores were enough for fourth overall.

Pourcel had been rallying at the last two races with podium performances, but a bad start and a stall cost him in the first moto, as he finished a lowly tenth. “Me and Jason [Anderson, teammate] lined up next to each other but we had bad gates, it was just too deep as soon as we got into the dirt over the front of the gate,” he said. He started better in the second moto and held Roczen at bay most of the way, but Roczen got past and Pourcel also had another stall. His 10-4 made him sixth for the day. Fifth went to Peick, who needed a bounce back after a few tough rounds. Peick got good starts and went 5-6.

For how bizarre Jeremy Martin’s season has been—stalling late while leading at Budds Creek, his bike not starting on the line at Glen Helen—he is heading home with a seven-point cushion over Marvin Musquin. It didn’t come easy for Martin—he had to work for it—but 1-1 scores have propelled him to the top of the standings as the series heads to Millville in two weeks. A look at the results makes it seem like a perfect day for JMart, but it was far from it. In fact, his teammate Cooper Webb coulda' shoulda' woulda' won the overall if not for a late crash in the second moto. Meanwhile, Martin was bouncing back from his own early woes.

“I made a mistake with suspension between the last practice and the race,” said Martin after the race. “I really struggled for a while and those guys passed me, but I was able to turn it around.”

Martin said the “miss” to his suspension setup in the first moto lead to arm pump, which is why he dropped back in the early stages. Martin’s fitness came into play late in both motos, as he charged back to catch his teammate Webb in the first moto, overcoming a 2 second deficit on the final lap to make a dramatic pass for the win. Webb appeared to have the second moto win in the bag—his first of the season—as he built a five second lead late in the race. An unforced error before the rollers on lap 13 cost Webb the win and the overall, as Martin got a two-for-one, passing both the downed Webb and early leader Christian Craig in the same section. Craig, who led much of the moto before Webb got him, got held up on Webb's downed bike, and Martin slipped past.

While Martin was charging to wins in both motos, championship rival Marvin Musquin was fading late in both. Musquin said after the race that his wrist, which he initially injured in a crash at Thunder Valley, flared up this week and started hurting halfway through the motos. That led to his worst showing of the season, with 4-6 scores for sixth overall. Fortunately for Musquin, the series has a bye next weekend before heading to Millville.

Christian Craig’s return to motocross has better than anyone could have imagined. Before the race, Craig said he felt a podium was in the mix this weekend. Have a chance at the win? Craig probably didn’t even foresee that scenario. Craig grabbed the holeshot in the second moto and held off Webb for a solid eight laps before Webb was able to make his way around. Craig still had a chance at the moto win after Webb went down, but lost the position to Martin. A hard charging Zach Osborne also passed Craig late in the moto, but he did hang on for third, the first podium of the season.

Osborne said after the race that he’s been make changes to the bike and it’s paying off. He says he feels he’s found the right set-up and it’s allowed him to challenge for wins. Osborne charged from mid-pack in the second moto to grab second late, pushing him to second overall ahead of Webb.

In just his second race back, Webb proved he’s ready to challenge for wins—and he should have had one, or maybe two, today. Webb lead late in both motos—losing the first to a last lap pass to Martin, and crashing late in the second—but he still held on for fifth in the second to capture his first overall podium of the season.