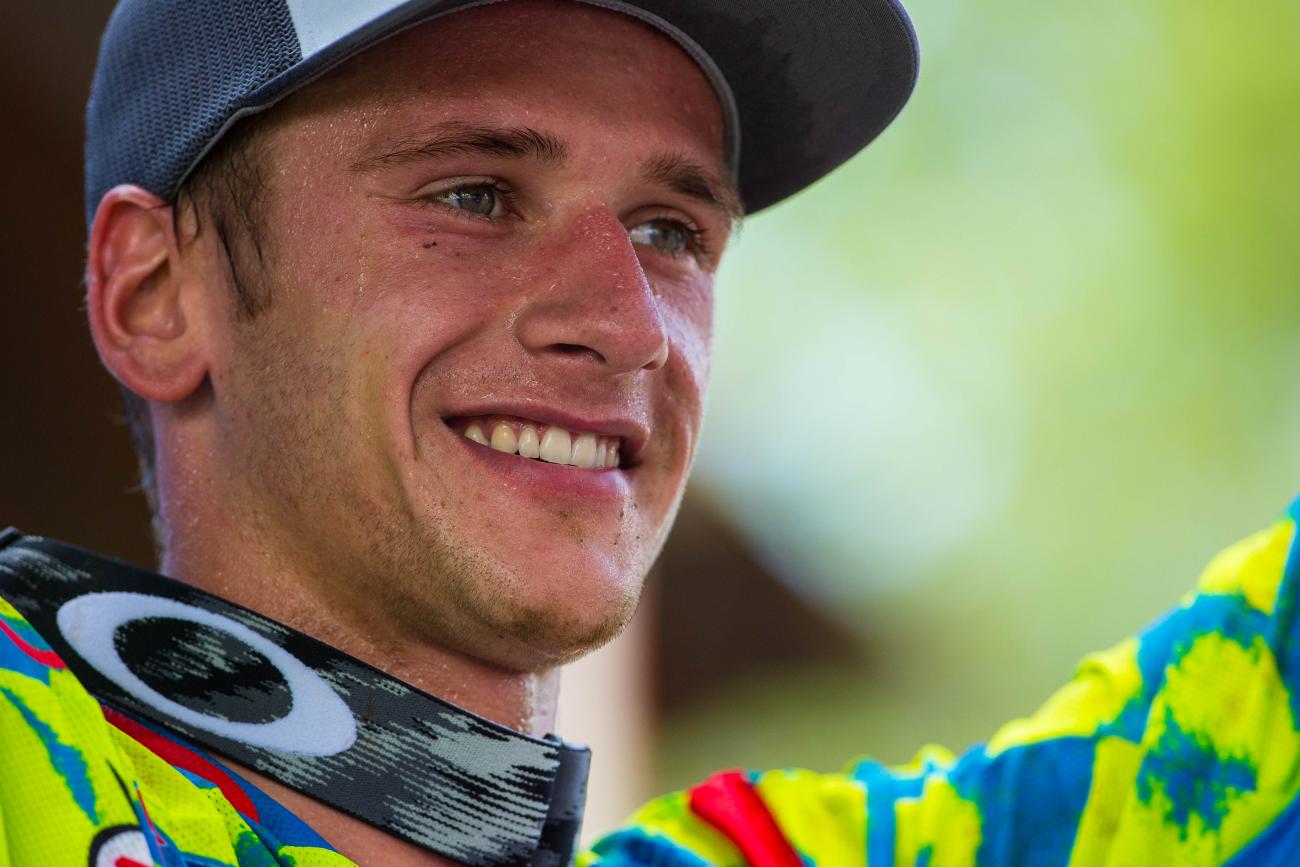 Yamaha obviously has things figured out in the 250 Class, but before Justin Barcia’s fantastic win last Saturday, the tuning forks hadn’t set the winning tone in a 450 national since Matt Goerke won at Southwick in 2009. But wait, there’s more. If Barcia can win again this weekend (or for the rest of the season, for that matter), he’ll be the first Yamaha rider to win multiple 450 nationals in a single season since Grant Langston on his way to the title back in 2007. –Aaron Hansel

The Rockstar Energy Racing Husqvarna rider wasn’t lighting the world on fire during the first leg of the season, but he’s been very good the last two rounds. In fact, almost exactly half of his points (78 of 157) have been scored exclusively in the last four motos. He had a pair of thirds and a runner-up finish in those last four, too. We’ll see if he keeps this surge going at RedBud. –Hansel

That’s right, Tommy Hahn of Motosport.com/GPI Honda (GPI stands for Great Planes Industries, by the way) was back in the top ten with a ninth overall at Budds Creek. Hahn’s always been ultra-fast—he won at Steel City on a 450 in 2009—but has constantly dealt with crazy bad luck and steady injuries. He even retired from racing at one point. He’s back now, though, and was great last week in the mud. Look for him to be on the gas this weekend in the dry. –Hansel

You might think you and your buddies party hard at your local national, but you don’t. At least not like they do at RedBud. The energy there is unreal. We’re pretty sure a standard RedBud fan makes his checklist of things to bring along by combining lists from Burning Man, Lollapalooza, and J-Law’s Halloween party. Where could you snap a single picture and capture dudes wearing watermelon helmets, body paint, and ankle monitors, and the world’s fastest racers hurling themselves over the ridiculously large LaRocco’s Leap? The Fourth of July crowd at RedBud is as much a part of the action as the racing. If you can’t make it, be sure to check out the galleries. –Hansel

The Yamalube/Star Racing Yamaha rider was good at Budds Creek, although it doesn’t exactly show on paper. He went down in the first turn of the first moto but still salvaged a sixth. Another crash limited him to fourteenth in the second moto, but all things considered, not bad for his first race back since re-injuring his ankle at Hangtown. Expect Webb to be at or near the front at RedBud. –Hansel

The fate of the 2015 250MX championship will play out over the next two months, with either Jeremy Martin successfully defending his 2014 title or Marvin Musquin winning his first MX title since the 2010 FIM World Motocross Championship (MX2 class). Musquin currently holds the advantage in nearly every statistical category: points (up 10); moto wins (7 to 4); laps led (96 to 51); moto podiums (9 to 7); holeshots (3 to 2)—yet 10 points isn’t a lead that you can sit on over the next six rounds. And it would have been much less had Martin been able to take advantage of Musquin’s 7-1 scores at Budds Creek. (Martin stalled leading moto one and crashed while in position for the overall win in moto two, so Musquin actually gained 2 points last weekend.) Over the remaining six rounds, each rider has two tracks where they are considered favorites: RedBud and Millville, for Martin; Unadilla and Washougal for Musquin. Most consider Indiana and Utah toss-ups. Can Martin draw closer on a track many expect him to win at this weekend? –Chase Stallo

For the past two years, Justin Bogle has been the veteran glue expected to hold a young GEICO Honda squad together. “I was ready to jump into that role this year,” Bogle told us in 2014 about being the veteran leader. “That’s kind of how it’s looking so far.” When Bogle went down with a shoulder injury at the season opener, GEICO brought in Christian Craig to fill his shoes. Although he’s raced sparingly over the last two years—he announced his retirement in 2013—Craig has the most professional experience on a roster filled with two rookies. Craig has been a top-ten mainstay since his return at Thunder Valley—six in eight motos—but said earlier this week in a team statement a podium is the ultimate goal. “"I want to be on the box," Craig said. "That's my goal. I have the speed, and I want to take it to RedBud and get on the podium." Craig very nearly reached the podium in his first race back, a fourth at Thunder Valley. Can he make it happen this weekend? –Stallo

As mentioned above, Jeremy Martin and Marvin Musquin have combined to win nine of ten motos thus far. Alex Martin broke the stranglehold at Budds Creek, and the likes of Adam Cianciarulo, Jessy Nelson, and Zach Osborne have all led laps this year. Under ideal weather conditions, though, no one has threatened the top duo. Will someone make a run this weekend, or will Musquin and Martin continue to reel in moto wins? –Stallo

Ken Roczen left a lot of points on the table last weekend at Budds Creek. It’s not often—heck, not ever really—that Ryan Dungey finishes outside the top ten in a moto. The last time it happened was RedBud, 2013, when Dungey finished thirty-fourth due to an electrical problem in the first moto. Facing a 37-point deficit with six rounds remaining, chipping away at points may not get Roczen far. He needs to pick up points in bunches, starting Saturday. RedBud might have been Kenny’s best race in 2014, but will Dungey give him an opening? –Stallo

Fantasy Alert! Ben LaMay will make his 2015 Lucas Oil Pro Motocross debut this weekend. LaMay, who finished twentieth in 450SX in 2015, returns after missing the first six rounds while his team—Munn Racing Husqvarna—was putting together the final details of their program. LaMay finished twelfth overall in 450MX points in 2014, which included a twelfth at RedBud. Spotting the field six rounds will be tough to overcome, but with a lot of heavy hitters sidelined with injury, LaMay should be battling for at least a top fifteen overall. Include him in your Racer X MotoDynasty Fantasy picks this weekend. You won’t regret it. –Stallo