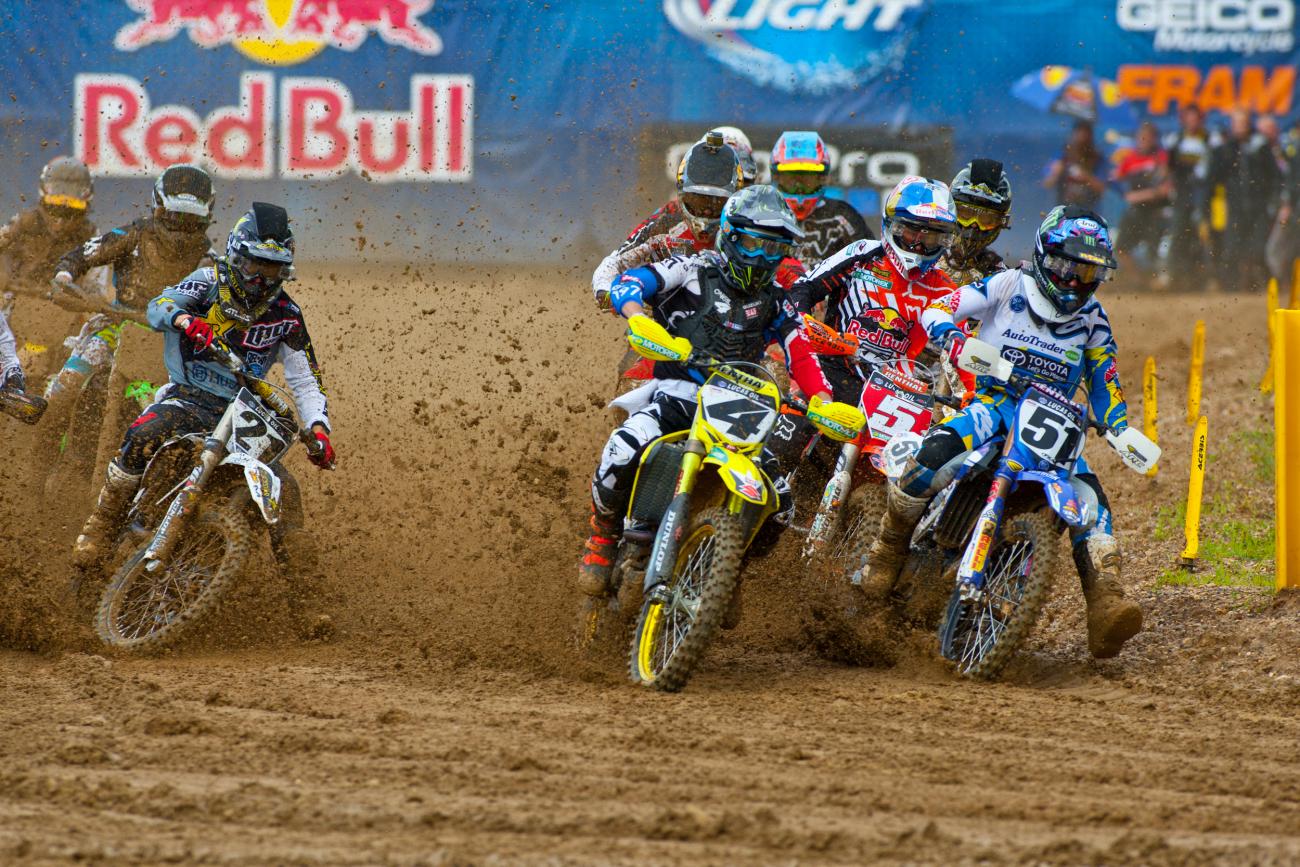 How many times have you heard that mud is the great equalizer? I’m betting this is not the first. Every summer, the afternoon thunderstorms that often dot the horizon wreak havoc on an outdoor motocross race. So much work goes into preparing for every facet of the day's racing, but mud is just one of those factors that is tough to predict. We’ve seen many of the most unusual results in our sport's history due to muddy conditions, and that won't change anytime soon.

For the mechanics, it’s a stressful situation that creates more work and more opportunities for the machines to fail. For the teams, the bikes are essentially destroyed after a severe mud race. Mud is a very expensive occasion on the outdoor circuit, and that's never a positive thing for any team, big or small. There isn't a lot of excitement shared amongst the mechanics or team managers when the skies open up.

For the riders, however, it's a mixed bag. Some riders just dread the mud, while others absolutely love it. I was probably somewhere in the first group for a decade or two. It was just never much fun for me. I don't have, let's just say, the longest legs, so it was just difficult when things got messy. I didn't do all that terribly in the mud, but it certainly wasn't my forte.

Other riders, though, absolutely loved the mud. You could often see them wandering around outside their team's semi doing some sort of nonsensical rain dance. They knew they were good in the mud. With the rain came an opportunity for a great result, maybe better than they could ordinarily achieve.

This has happened many times throughout history.

Ricky Ryan's miraculous win at Daytona in 1987 is a great example. Sebastien Tortelli's unlikely win in 1998 at the LA Coliseum is another. Kelly Smith winning KTM's first-ever national motocross race at Mt. Morris in 2000 also happened in the mud (this despite having Matthes as his mechanic—a considerable obstacle to overcome). Jake Marsack even scored a podium at Daytona in the colossal mess of 2008. These are results that these riders never matched again and were unarguably due to their ability to capitalize on the situation.

The outcome of the first 250 moto on Saturday at Budds Creek was also influenced by the weather. Alex Martin won the first moto of his career due in part to his mud-riding abilities. Not to say A-Mart isn't improved this season—that's obvious to all—but keep in mind that the older Martin brother had never finished on the podium overall before Saturday. As incredible as his first moto victory was, it almost didn't happen. His younger brother, Jeremy, of all people, hunted him down late in the moto after Alex had to ditch his goggles and lost his rear brake. It was a cruel twist of fate, as Jeremy pounced on his big brother's lack of stopping power, seemingly ripping away Alex's chance of victory.

As they rounded the last lap, the mud reared its unpredictable head. Jeremy Martin stalled his bike. As Alex went by, I can only imagine the rush of adrenalin he felt. Such a peculiar engine misfire eradicated the crushing blow from the previous lap. Some would say it was poetic justice for the older brother who is so often overshadowed by his championship-winning little brother. Whatever the case, it was high drama for the Martin family, and as disappointed as Jeremy must have been, some part of him had to be happy for Alex. Let's just hope the championship doesn't come down to three points, or Christmas dinner could be a bit unnerving.

The 450 Class had even more madness. The second moto was delayed and almost not held at all due to a torrential downpour. Ryan Dungey and Justin Barcia jumped out to great starts, which is certainly no surprise. What was a shock, though, was to see Ryan Dungey crash in spectacular fashion. This is a rider that rarely makes even a small mistake, but Dungey landed in a muddy soft spot and was ejected over the front of the bike. Luckily, he was unscathed and managed to salvage something from the moto, but it was just another example of mud's unpredictable nature.