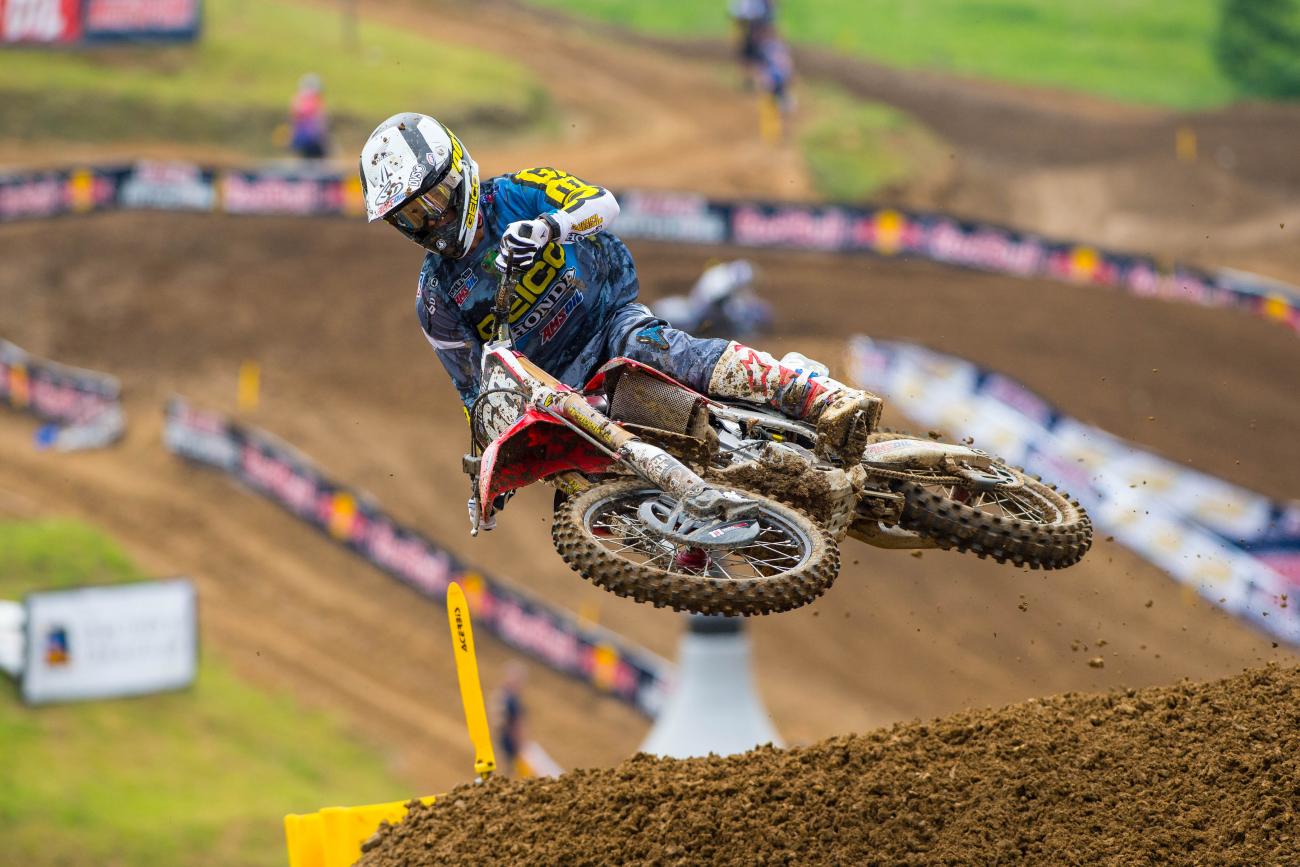 The red plate just can’t seem to find a permanent home in the 250 Class. Musquin and Martin left Hangtown tied in points, Musquin had it after Glen Helen, and Martin stole it back at Thunder Valley and kept it at Tennessee, only to lose it again at High Point. Musquin now leads Martin by 8 points, but Martin could easily make that up at Budds Creek and take back that fickle red plate. –Aaron Hansel

Monster Energy/Pro Circuit Kawasaki’s Cianciarulo has had some great moments this summer, but unfortunately many of those were cut short due to crashes and bad starts. The good news is his fitness is improving, and from here on out he’ll be on tracks (except Indiana) he’s actually raced on before (this is the first year he’s raced the first leg of Lucas Oil Pro Motocross). His first moto at High Point, where he finished second to Musquin, was his best of the year, and now he’s had an off-week to keep building. If he gets those pesky crashes figured out, we’ll likely see an improved Cianciarulo going forward. –Hansel

After retiring in 2013 and returning for a brief stint last year, Craig is officially back and looking for a ride. The door was opened as a fill-in for Justin Bogle at GEICO Honda, but as far as we know he doesn't have anything yet for 2016. He was awesome at Thunder Valley with a fifth overall, had bad luck at Muddy Creek, and had a very respectable 8-7 for seventh at High Point. If he can get back to his top-five ways, good offers should start rolling in soon for next year. -Hansel

While Baggett and Anderson frequently find each other on the track, we’re talking about their results on paper here. They often finish near each other, they’re both 450 rookies, and they’ve both even had a no-point moto. They’re close in the points too—Anderson sits in third, and Baggett is just 5 points behind in fifth. We knew they would have some great races, but who would have thought they’d be scrapping over third in the standings with Justin Barcia almost halfway through the season? –Hansel

With Roczen taking his first overall of the summer at High Point, this battle is even more relevant now. Roczen trails the unflappable Dungey by 37 points, and in past years he hasn’t been as strong in the back half of any season in America. However, as we’ve already seen, anything can happen to the point leader, and Roczen, who has admitted to getting fatigued in the past, is on a completely different training program now. Where in the past he peaked early, he might just be finding his stride now. He told as before Glen Helen he should be much better once he gets to the break after High Point. If Roczen gains points on Dungey this weekend, it could be the beginning of a remarkable comeback. –Hansel

Throughout the first five rounds of the Lucas Oil Pro Motocross Championship, riders and fans alike have enjoyed pristine conditions. The average temperature through five rounds has been a mild 75.8 degrees. (We calculated average temperature during race days using weather.com.) The warmest race was the Tennessee National, which was a brisk 81 degrees. That could all change this weekend. As of today, there is currently a 100 percent chance of rain on Saturday. Of course, that could change very easily, like it did at both Tennessee and Colorado, where similar mudder predictions yielded to beautiful race day weather. Even High Point turned out great. You just never know how Mother Nature will impact a national. Stay tuned. –Chase Stallo

It’s easy to lose sight of how impressive Broc Tickle’s 7.9 average finish through ten motos is. Considering where he typically starts—14.25 average after lap one before High Point—it becomes even more impressive. High Point may have been the turning point. Tickle finally cracked the top ten after the first lap—fifth in moto one; ninth in moto two—but wasn’t able to take advantage of the good start, finishing sixth and eighth, respectively, right around where he’s finished all season.

Tickle recently told DMXS Radio that he wasn’t accustomed to running that intense pace because he’s had to come through the pack all season. “Having those guys all go for it, I wasn’t used to that,” he said. “I was used to making passes. It was good for me. It keeps you motivated. I haven’t been there in so long that I tightened up.” Tickle has been a steady presence inside the top ten this season, but if he can find his starts, he may vault into a top-five mainstay. -Stallo

Christophe Pourcel knew it would take a couple races to get his feet wet. A new class, a new bike, and limited testing were barriers Pourcel had to overcome entering the season. But, to know the exact amount of races it would take to improve—five in this case—you had to have done this before. And Pourcel has, just last year in fact. “It’s like last year, it took me three or four races to finally get my starts, and then once I get my starts, then it’s good,” he told Jason Weigandt following High Point. Now, with a week off to continue tinkering with settings, Pourcel, who is coming off his first moto podium this season and the fastest time in qualifying at High Point, has to be seen as a threat to podium again this weekend. –Stallo

Gared Steinke and his two-stroke are back to make another run at the 250 Class this weekend. Steinke rode a YZ125 at High Point to thirtieth in qualifying, before eventually finishing twenty-seventh overall, becoming the first rider since Brett Metcalfe in 2005 to put a two-stroke inside the top thirty. There are plenty of disadvantages, as Steinke pointed out in Privateer Profile this week, saying, “Those guys on the 250s have a lot more torque. I’d say that our bikes are pretty similar in speed on the top end. They just got me in the torque department coming out of the corners and a little bit coming into the corners.” But, and this is a big but, fans dig it. And he’s having fun! Let’s see if he can keep the crowd jacked this weekend. -Stallo

The Return of the Webb

Budds Creek will mark the return of Yamalube/Star Racing Yamaha’s Cooper Webb, who has been absent since re-tearing the ligament injured in Vegas, tearing a ligament at the back of his ankle, and sustaining a high ankle sprain. Webb has been back on the bike for about ten days and told us yesterday he’s ridden five to six times. “We wouldn’t come back if we weren’t capable of doing what we can,” he told us yesterday. “I think I’m more prepared now than I was at Hangtown.” We can’t say for sure how the time off will affect him, but don’t be shocked to see a podium in his first race back. -Stallo