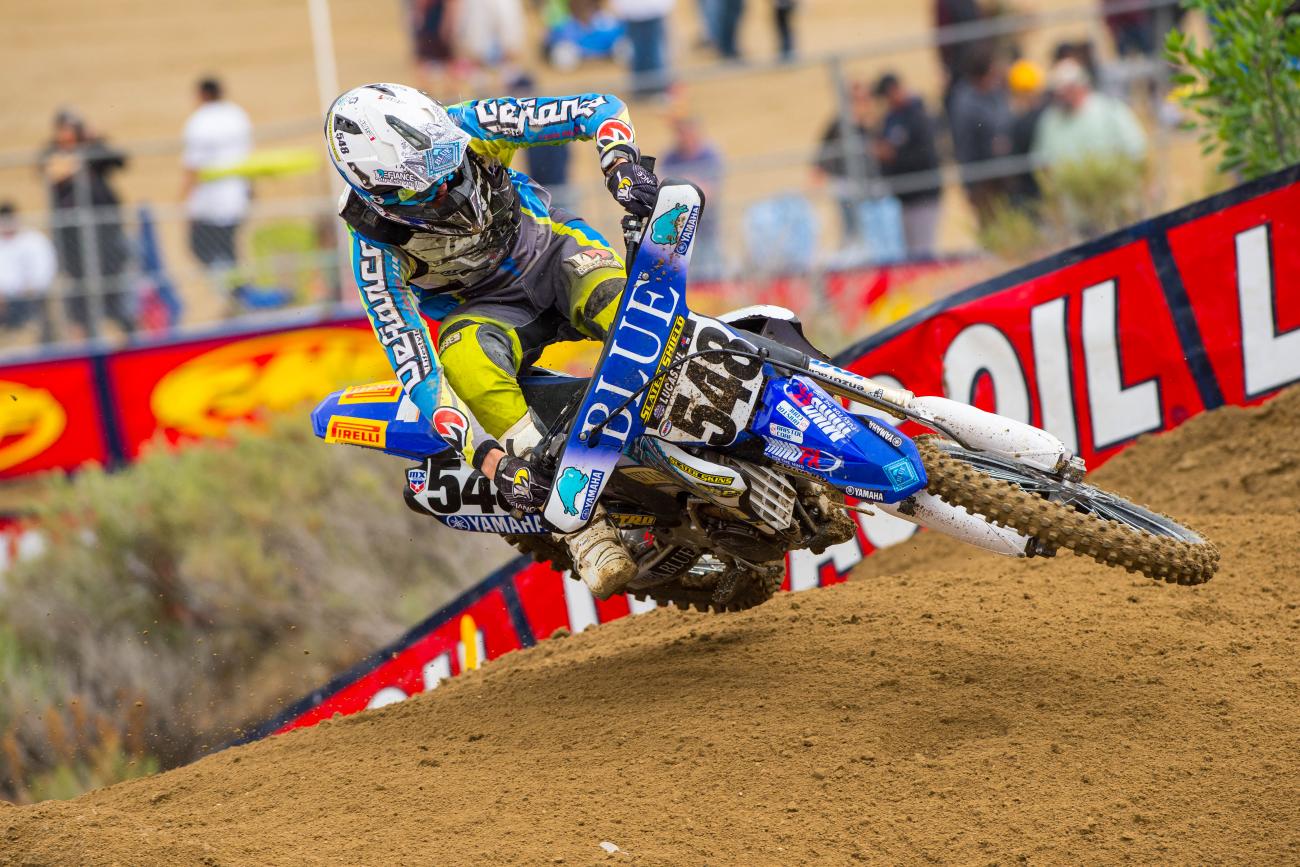 Broc Schmelyun was still able to joke on Monday when we spoke with him via telephone. He told stories of how his doctor saw his crash; how he felt “lucky” after watching it; how he hopes to still attend Budds Creek to support his team—all while sitting in a hospital bed at Ruby Memorial Hospital in Morgantown, West Virginia. Schmelyun sustained a long list of injuries—severe concussion, compound fracture of his left femur, broken left fibular, torn ligaments in his left ankle—yet feels grateful. Grateful he’s able to walk out of the hospital. Grateful he was coherent two days after arguably the worst crash in Lucas Oil Pro Motocross history. As Schmelyun, 23, described it, “it was pretty surreal.”

Broc Schmelyun entered High Point coming off his best motos of the young season—20-20 for twenty-third overall at the Tennessee National. He felt his best races were ahead of him, after getting a late start to the season with Blue Buffalo/Slater Skins Yamaha. He finished twentieth in the first moto at High Point, scoring points for a third consecutive moto. Then, the bottom fell out—literally. Broc can’t quite remember what happened that day—or the day prior—but says he was happy someone got it on video, as he’s still trying to piece together the details of the day.

When we spoke with Schmelyun on Monday as he was waiting to get discharged from the hospital, he filled us in on the details of his horrifying crash Saturday at High Point.

Racer X: First off, how are you feeling?
Broc Schmelyun: I’m feeling okay. I’m a little on pain meds right now, nothing crazy like morphine or something like that, but just some pills. That’s been helping a lot. I did without them all night [Sunday], and I woke up at like five in the morning. When I’m on the pills, I’m okay. When I’m not, I feel like I got hit by a bus and I’m just kind of sore all over. It’s not really one thing in particular that’s killing me; it’s just like everything all over, just to move my arms, neck—anything just kind of hurts all over. When I’m just relaxing and I have some minor stuff in me I’m actually a lot better than I thought I’d be—that’s for sure.

What was the official diagnosis?
I got a pretty severe concussion. I had a compound fracture of my femur. I broke my fibular, and I tore a small ligament in my ankle. And that’s it.

Were all in the injuries in the same leg?
Yeah, that’s all left leg. And, actually, if it wasn’t for that small ligament tear in my ankle I’d be walking out of the hospital today [Monday]. But just because of that small ligament they have to have a precaution to that. I think I have no weight bearing for like six to eight weeks.

Horrible picture, but I'm discharged from the hosptial! Broke my femur and fibula, tore a tendon in my ankle and got a concussion. I'm so happy to be in the position I am in after such a gnarly get-off. Thank you everyone for your thoughts and prayers. They def did the trick. Feel like I got ran over by a bus but all in all I'm very blessed. Thank you for the support, it means the world to me!

A lot of people have seen the video by now, but take us through what happened. It looked like you just lost control on the face.
We’re not exactly sure. All we know is that my grip was off when the bike finally ended up where it ended. So we don’t actually know from the video. It appears that my foot slipped off, but we don’t know if it was a result of the grip slipping. We don’t actually know exactly what happened. Honestly, I don’t remember really any of the second moto. I remember I fell, I think, in two corners. It took me a while to get the bike started and I got back going. But other than that pretty much the last two days are kind of a blur. I don’t remember too much about it.

And you said you have watched the video. What was going through your mind when you saw that?
When I woke up I didn’t even know how I crashed or what happened. I was happy to see that someone did get a video of it. I didn’t even know that it was on that jump because I hadn’t been told yet or anything. I was pretty incoherent at the time. When I actually saw it, it was pretty surreal. I’m in a little bit of pain, but considering what happened I’m very, very fortunate and lucky in my opinion that I’m not in way worse shape. I’ve seen less crashes with way worse results than what I’ve had out of that, so I’m pretty happy and blessed to be in the spirits that I am.

Before you got injured, how was the deal with Blue Buffalo/Slater Skins Yamaha going? You picked up a ride with them in supercross, correct?
Yeah, we kind of just pitted out of their rig for supercross. I guess it was a trial experience there. We meshed pretty well with that team and everything. Everything worked out pretty well. And then, for the outdoors, we kind of were able to throw something together a little late, and we were just kind of working our way through things at the beginning. We really got along well with those guys. Blue Buffalo’s been awesome. They’ve been giving a ton of support and everything. They even extended… even through this whole deal, which obviously me being the only rider on the team, I’m sure that they’re in a pretty stressful situation right now trying to find someone for Budds Creek. They have to have a rider out there. They’ve done an awesome job at keeping up with me and saying that as soon as I’m ready to get back on the bike they’d love to have me. They’ve been really, really cool about it, and I couldn’t say enough about those guys. Tyler, John—they’ve been awesome.

One of the main questions everyone always has when they see that bike is what does it feel like riding it? Some people I talked to said they don’t even notice it. What was it like for you the first time you got on the bike? Was it comfortable?
It’s actually pretty incredible. I don’t realize at all with the front shield on there. If anything, it deflects from some roost and stuff. We actually cracked the front plate at one of the supercross races—a rock got into it—so pretty fortunate there. It could have maybe hit me or something like that and had me injured. Then the side plates, I actually like them better than stock. I rode a stock bike. When we first got that bike I rode it stock for a day or two, and I kept catching my knee braces on one of the shroud pieces. With the Slater Skins, with there being a little bit more coverage over everything, I didn’t catch my knee at all. So it was kind of one of those things that you don’t really realize it until after you’ve ridden with them. And then, when I went back to the other ones, I was like, wow, I actually like the Slater Skins a little bit better, so it’s been nice.

You’ve previously been a privateer. You know the importance of sponsorship. Is that something you’ve noticed that people have actually noticed Blue Buffalo and just kind of help them get their name out there?
Yeah. Every single weekend we have people walk up, and of course they’re looking at the bike. They see that it’s a little bit different than everyone else’s. It really draws people’s attention. Motocross as a whole, I think, is one of the most brand-loyal type of communities out there. We hear constantly about people switching over to Blue Buffalo and how their dogs like it better and stuff like that. It’s been really neat. Even doing tech inspection, those people see one thousand bikes a year go through the AMA tent and they’re stopping and taking pictures with it, stuff like that. It’s definitely catching people’s eye, and that’s the whole idea about it. John Slater is all about getting the brand out there and getting that brand name so they can hire someone like myself instead of someone like Ryan Dungey, and still try to get exposure out of it. So they’re able to kind of help out the privateers without putting the strain on the budget like hiring a big name would.

Unfortunately, you did have this injury, but before you were doing well and actually one of the only privateers scoring points consistently in the 450 Class. Things were going well for you beforehand.
Yeah. We got a little bit of a late start. I feel like my best motos were definitely to come. I guess that’s pretty easy to say, but I feel like even at High Point, first moto I fell, but I still got twentieth. Second moto, I fell as well. But I just feel like I was feeling a lot better than what we showed, and hopefully I’ll have an opportunity to get back out there and kind of show what I can do. I think that with their support and the program that they have and with my ability, I think we could have done a little bit better, but it is what it is and you’ve got to move forward.

It’s pretty early in the process, but are you looking at six months, five months, four months recovery?
They said two months without weight bearing just because of that ankle tendon. Then after that I should be full weight-bearing. The femur really isn’t the issue; it’s just that tendon. They haven’t really given me a timetable yet. I’m supposed to come back here in like four weeks or something like that, and they’ll give me a little bit better of an idea. The doctor actually saw the video and was amazed and added me on Facebook so that he could show his buddies and everything, so that was pretty funny. They’re pretty amazed that I guess just being in the physical form that a motocrosser is that you can walk away from that with relatively low injuries.