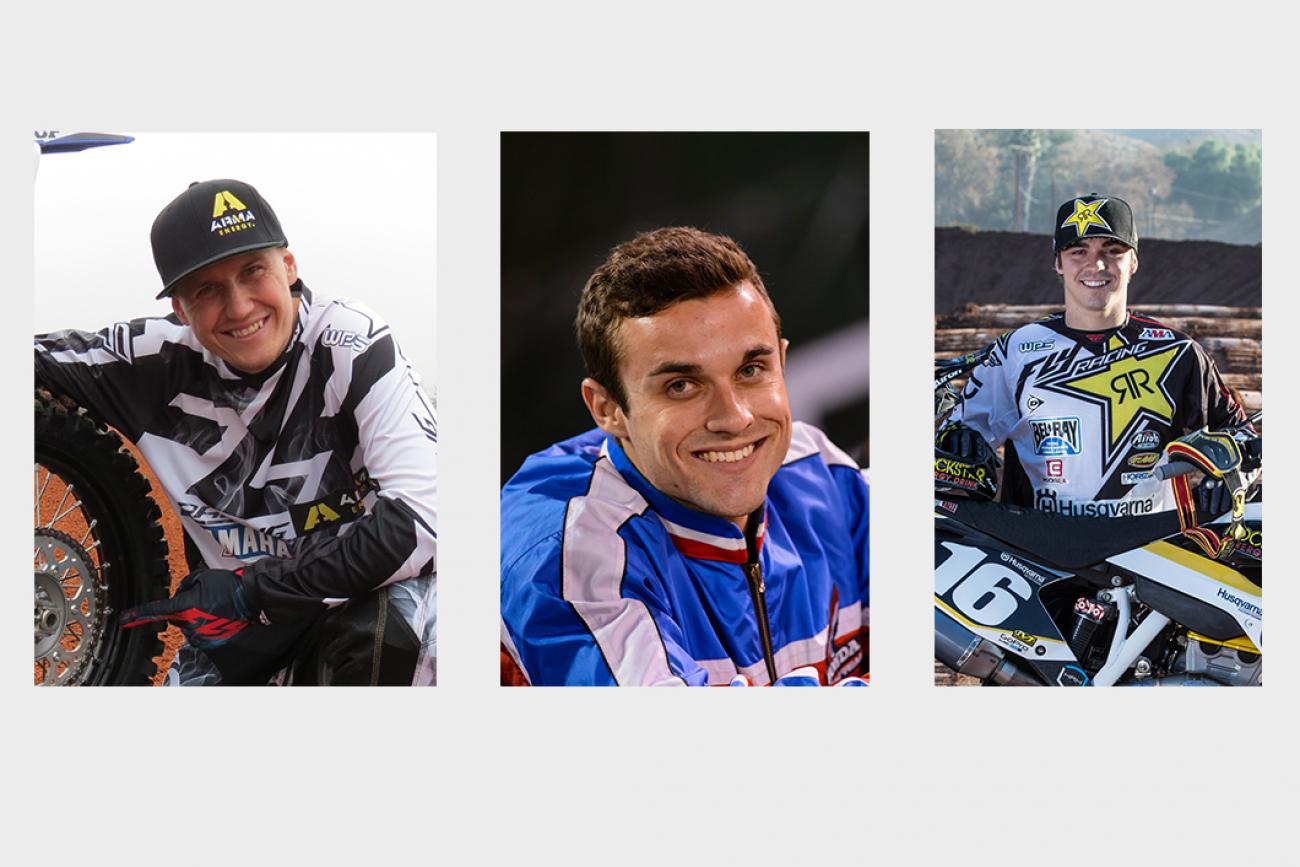 3 on 3 Osborne, Albertson, Leib, and GPs

In just four rounds of the FIM World Motocross Championship season, we’ve now seen just about everything from American hopeful Ryan Villopoto. He’s been bad, he’s been good, he’s been right in between. Now, he’s crashed out of a moto and is facing a big points deficit, providing he can even suit up and race this weekend at Valkenswaard, Holland.

It’s been a learning experience for everyone, Ryan himself, especially. To try to get some more insight, we contacted three American racers who spent time racing GPs—Rockstar Energy Racing Husqvarna’s Zach Osborne, Motosport.com ARMA Energy Yamaha’s Jimmy Albertson, and Rocket Exhaust’s Michael Leib. Here’s what they have to say about the transition and the comparison.

1. Okay, everyone is trying to estimate how different the transition is to the GPs for Ryan Villopoto. How different is it, really, in year one?

Zach Osborne: It's easy to say it's different, but unless you've experienced living there for extended periods you can't really appreciate how different it actually is. Not only is he dealing with a whole new lifestyle and tracks, but there are also a lot of small things you miss. The travel is different (tougher in some eyes, easier in others). Plus, he has to figure out all the things that make it easier all in one try. I'm sure he will look back at this season and see things he could've done differently to make it a lot easier on himself. I know that at the end of the fifth year I had it down—but again, that was five years! It was the norm for me to be there, and I almost felt different or awkward to be here in the States. As far as tracks go, a lot of it will feel normal, but some will feel like never before. Surfaces, bumps, conditions etc. will be all new. Hard to believe, but it's true.

Jimmy Albertson: The way of living is definitely a lot different then I expected it to be. There’s definitely culture shock, but that didn't really hit me until other things went bad with my team. At first, like anything, it's exciting. After a while you miss the ways you were able to do things in America. Especially for Ryan, I hate to say it, but there’s no possible way that he will ever be as good as he was training and riding at his own place in Florida. There are just way more variables for him to deal with now. That being said, he's a champion and there is no doubt in my mind that he'll figure it out.

Michael Leib: For myself, I spent three seasons over there, and the third really wasn't any more comfortable than the first. It’s interesting to see the public’s views and opinions about what he’s doing over there. It’s something that I think even Ryan is still trying to comprehend. The schedule, that atmosphere, the people, the tracks...plain and simple, it just isn't comparable to our racing here in the States.

2. Give us an example of some of the biggest differences for you. Was it on track stuff or off?

Osborne: The main thing for me was the difference in travel. The first year I tried to fly everywhere and hotel it, but all those guys travel in motorhomes. They’re small, but nice. Once I embraced that route it was much easier and more fun for me. It was one of the big breakthroughs for me where I started to try it their way and it worked.

Top Jimmy: The track conditions are definitely gnarly! They don't prep much and the surfaces vary so much. One weekend you are riding on concrete like dirt in Italy, then the next weekend you are building sand castles at Lommel. In America the dirt is made to be perfect everywhere.

As far as the atmosphere, I liked the living; I just didn't like not getting paid by my team. But I really liked the team staff...I don't know, I got issues [laughs].

Leib: The biggest difference for myself was the tracks. Traveling and seeing different places of the world was something that I quite enjoyed. However, American tracks compared to the GP tracks are just not the same. You have to ride them differently, and each weekend is completely different than the previous weekend. Using your American setup in Europe will make you question everything. There are a lot of variables. Also, it isn't as easy as just going to Europe and hammering down. Those guys train differently than we do and have all gotten much faster than most Americans will give credit. I will say that during my three years racing the GP circuit I got so frustrated with certain things... It’s really interesting for me to see that even a guy like Ryan is experiencing certain circumstances. At least from what I read online, anyways...

3. Are we seeing the same Ryan Villopoto we're used to?

Osborne: Maybe not quite yet, but he will show up before the end of the season. If anyone can make it work, it's RV. He has plenty of resources, and I think he can still possibly pull it off.

Top Jimmy: No. I believe he may have gone in thinking it was going to be maybe a couple guys that could challenge him. Little did he know that the top ten in that class is gnarly! Seeing Max Nagl win three races is no surprise to me either. In 2010, before running into injuries, he was unreal! It's good to see him back.

Leib: [Laughs] Absolutely! Just because Ryan is overseas and not winning every race like he did in that second GP doesn't mean he has fallen on his face! He will figure it out just like he has done with the rest of his career. Now, I don't imagine it being just as easy as the times before when he was stateside. Although, I’m sure he will figure it out. If there is anything we as the "moto industry" know about this sport, it’s that Ryan is probably the best guy in the world to be thrown into this situation and come out on top. He’s come back from tough circumstances before and won. I just wish people would give both the speed of the GP riders more credit, as well as more credit to Ryan himself for going over to a completely different team in an entirely different country to go race dirt bikes and deal with the pressure he has on his shoulders. I give him a lot of credit for what he is trying to accomplish.

Bonus: Sand track this weekend in Valkenswaard. Are those tracks as crazy as we've heard?

Osborne: Valkenswaard, no. Others, yes. Real sand tracks aren't ‘til the end of the year. He’ll probably do well, I think.

Top Jimmy: Lommel and Leirop are gnarly! I’m talking nightmares-the-rest-of-the-week-of-ruts-and-bumps gnarly! Valkenswaard is nice. I compare it to Southwick sand. I don't consider myself a sand rider at all, and I went 8-8 there in 2010. I think RV will gel well to it.

Leib: Oh, Valkenswaard, Lommel, or any other sand track spread across Belgium or Holland. Talk about not being able to comprehend something! I spent countless days and countless hours trying to understand how in the world to ride the stuff as well as those guys do over there. To answer the question: Yes, it is beyond brutal.