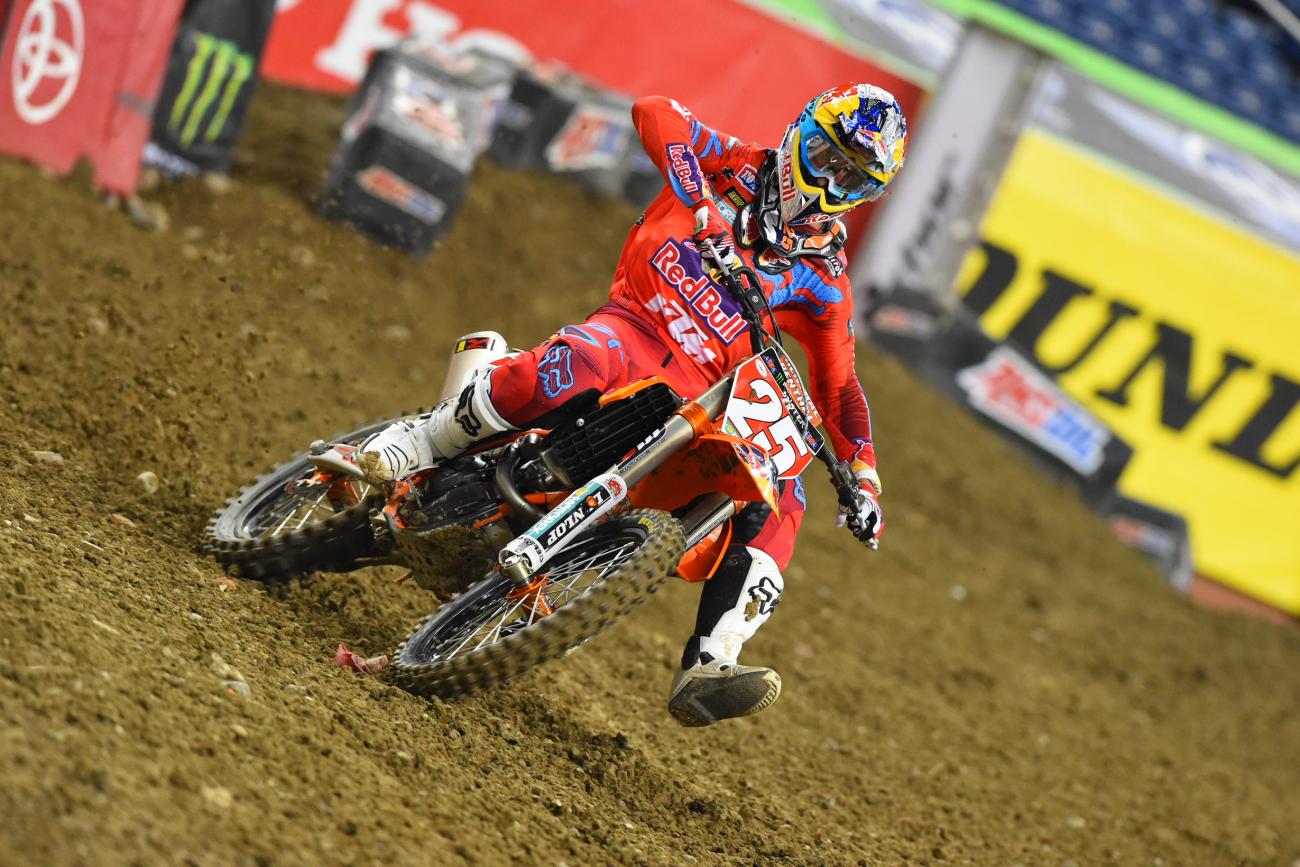 Welcome to the Race Day Feed from Ford Field. Here you’ll find blow-by-blow reports on the action as it happens. From breaking news to practice reports to race reports from the mains, it's all here. Check it all out, or find the information you're looking for in each labeled section.

Ryan Dungey’s streak has ended at three. And it was GEICO Honda’s Eli Tomac that slayed the points leader. Andrew Short pulled his 1,000 consecutive holeshot but was quickly passed by Dungey. Meanwhile, Tomac was making his way into second and began pressuring Dungey. Eventually Tomac made it work and moved into the lead. At checkers he was 11.8 seconds clear of Dungey.

For the second straight week, and third time this season, Cole Seely has found the podium. It was another solid ride for the rookie, who continues to improve with each passing round.

Chad Reed rebounded from a couple tough weeks that saw uncharacteristic mistakes from the veteran. Reed’s fourth was his best finish since his win in Atlanta 1.

Reed inherited fourth from Weston Peick when he crashed hard in the first rhythm section. Peick make a huge mistake at the end of the section and slammed hard into the corner. He did get up, but pulled off later in the main event.

Jason Anderson also had a big crash in the main event. He was attended to by medics, but did walk off under his own power. - Chase Stallo

We may want to hold off on handing the 250 East Region Championship to Marvin Musquin. Defending champion Justin Bogle made a statement tonight at Ford Field—winning both his heat race and the main event over the points leader. Bogle grabbed the early lead in Detroit and was flawless en route to his first win of 2015.

Musquin didn’t get a great start—around seventh—but quickly worked his way up to Joey Savatgy and made the pass for second. He was six seconds behind Bogle at the checkers.

Savatgy, who had a mechanical while in third last weekend, returned to the podium for the first time since the opener. He was a solid third.

Jeremy Martin bounced back after not making the main a week ago. Martin passed teammate Anthony Rodriguez and cruised to fourth.

RJ Hampshire and Martin Davalos came together early in the main—it appeared Davalos missed a brake, but we’re not certain—that left both on the ground. Hampshire rebounded to finish eleventh. Davalos finished twenty-second. - Chase Stallo

Ben Lamay took the holeshot and led Killy Rusk, Alex Ray, Tevin Tapia, and Ronnie Stewart into the first turn. Rusk took the lead for a moment, but Lamay took it right back with a hard charge through the whoops. Lamay relinquished the lead once again after casing a jump and allowed Rusk by. Tapia lost the final transfer spot to Stewart in similar fashion. 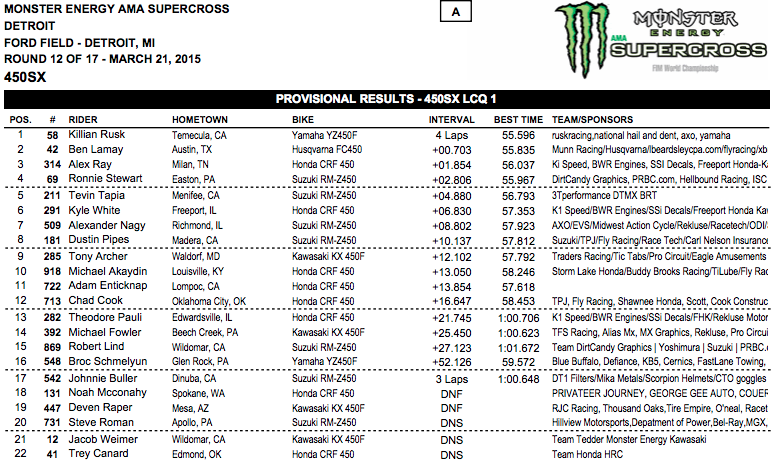 The second semi was a little tamer. Blake Baggett took the holeshot and went on to take the win. Fellow Suzuki rider Broc Tickle trailed Baggett, but was never close enough to make any moves for the lead. Josh Grant, Kyle Partridge, and Nick Wey took the remaining transfer positions.

This was one of the more eventful semi races this season, unfortunately. Trey Canard jumped onto the back of Jake Weimer during the opening lap after Weimer made a slight mistake and cased a jump. The race was red flagged and both riders were carted off the track--Canard in an arm splint and Weimer in a sling. Phil Nicoletti nailed the holeshot once again on the restart and had Davi Millsaps following close behind. Millsaps passed into the lead, but lost his front end exiting a bowl turn. He went to remount his Kawasaki but it was knocked out of his hands when Nick Schmidt had a slight run-in with it. Nicoletti regained the lead and took the win, while Millsaps made a late-race charge to get back into qualifying position. Millsaps passed both Heath Harrison and Tony Archer.

Zack Williams took the holeshot but was shuffled back to third after a bobble in a rhythm section. Mitchell Oldenburg assumed first and had Gannon Audette trailing behind in second. Brice Klippel held on to the final transfer position for some time, but ultimately lost the position to Adam Gulley. 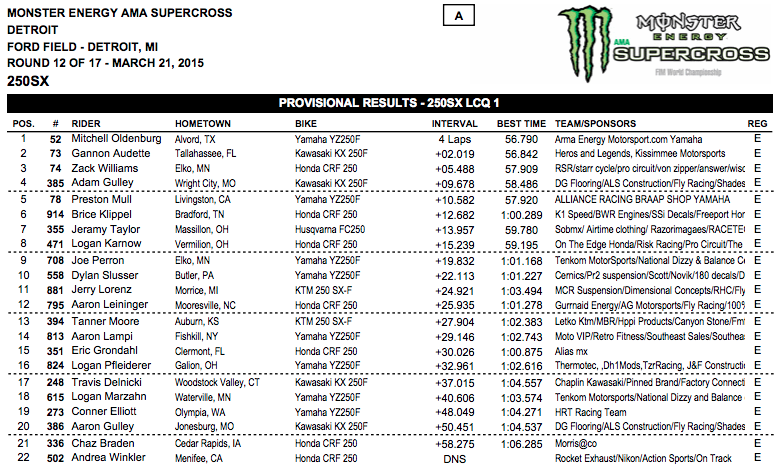 Andrew Short pulled another holeshot. Who saw that coming? Ryan Dungey was right there, though, and was able to take the lead by the second corner to carry forward with a win. Eli Tomac started in fifth and quickly moved into third. He eventually passed Short and challenged Dungey late in the race, but ultimately ran out of time and took second. Chad Reed challenged Short for third place for the second half of the race. They were taking different combinations through the rhythm sections and Reed looked like he could take third at any moment, but both veterans rode smart to transfer into the main. 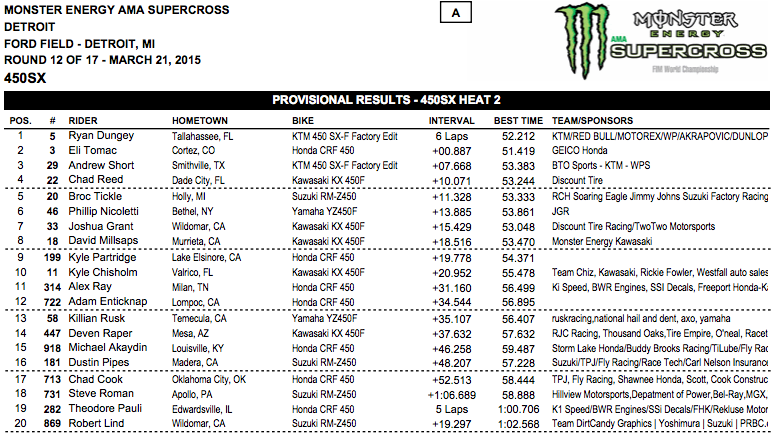 Honda is three for three in heat race wins so far. Cole Seely pulled the holeshot and never looked back until they pulled the checkers out for him. Justin Brayton started in second, but Weston Peick claimed the position later in the race. Trey Canard was managing his way around Blake Baggett and looked to be continuing his way toward the front until he connected with some Tuff Blox on the inside of the start straight and went down in a strange crash. Jason Anderson picked up some spots to finish in third, while Brayton held on for the final transfer spot. 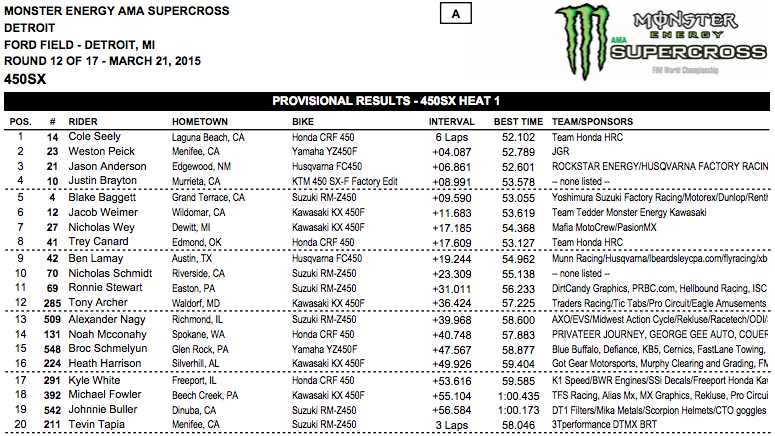 Justin Bogle got the start and took this one wire to wire to give GEICO Honda the first two wins in Detroit tonight. Jimmy Decotis edged Marvin Musquin out on the start and held on to second for a few laps. Musquin bobbled in a rhythm section, allowing Joey Savatgy to close in on him, but the red plate holder got back on the gas to hold third. Both Musquin and Savatgy closed the gap on Decotis after he pulled the trigger on the quad, had a close call, and lost composure momentarily. Decotis was shuffled back to fourth, but the quad was thrilling to watch and he’ll head to the main anyways. 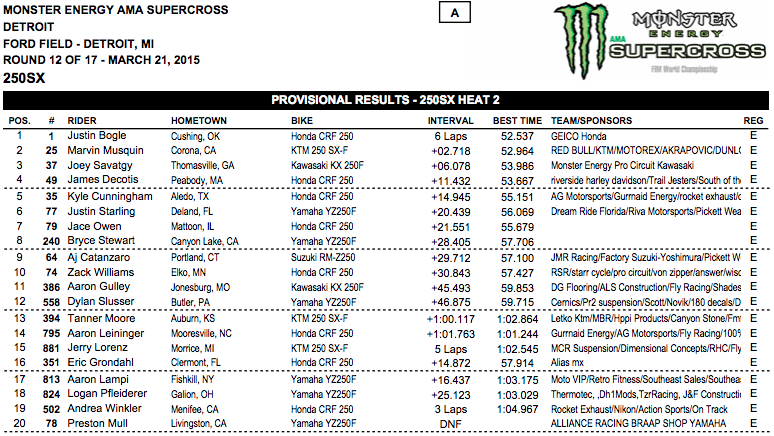 The two GEICO Honda bikes of Rj Hampshire and Jordon Smith jumped out front early, and they were trailed by Colt Nichols (great ride for him) among others. Jeremy Martin had a mediocre start and was buried mid-pack, but the Star Racing Yamaha rider worked his way through the pack and into qualifying position without delay. Anthony Rodriguez and Martin Davalos floated around fourth and swapped positions a few times. Smith was riding a solid race until the last lap. He cased the last roller in a rhythm section and endoed into a bowl turn. He’ll make an appearance in the LCQ. 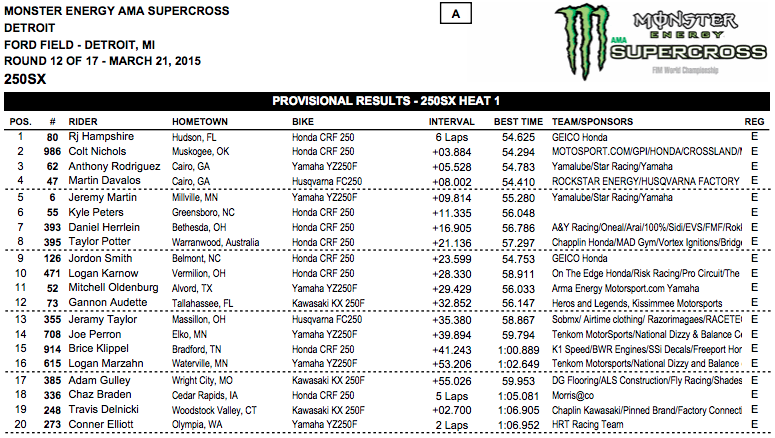 It’s an M and M kind of day in the city that bred Eminem. In the second 250 timed practice, Marvin Musquin bested his first session time, dropping down to a 52.810. The winner of three straight was one of only a few riders quading the first section (we saw Jimmy Decotis and Joey Savatgy also did it) and used the advantage to set the fastest time. The points leader seems to have found his footing in Detroit, which spells trouble for the field.

One week after missing the main in Indy, Jeremy Martin has fired back in Detroit, setting the second fastest time with a 53.303. Although the book is closed on his championship hopes, Martin showed up to Detroit ready to race. Joey Savatgy (54.036), Martin Davalos (54.168) and Jimmy Decotis (54.06) would round out the top five.

Musquin is hauling—no doubt about it. He was fastest in both the untimed and the first timed 250SX Group A qualifying sessions. Musquin was on rails through the ruts developing in the bowl turns, and the left-hand sweeper through the start straight favors riders with smooth throttle control. Jeremy Martin held down second for most of the timed practice and logged his fastest lap shortly before the checkers flew, though he was still a half second down from Musquin.

Musquin was also the first rider we noticed executing a different combination through the first rhythm section. He tripled onto the table just as all of the other riders were, but instead of stepping off and going double-double, he checked up on the table to go double-triple. Musquin seemed to be the only rider on a 250 to attempt the combination, but some of the 450 riders started to test that line out in their first timed session. 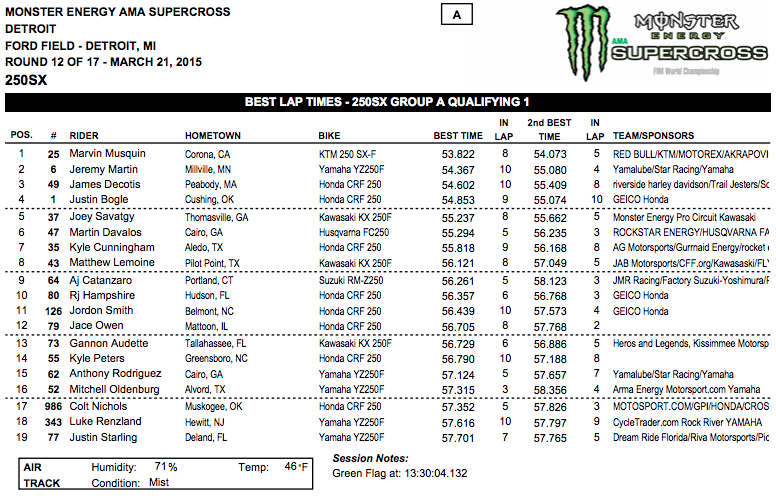 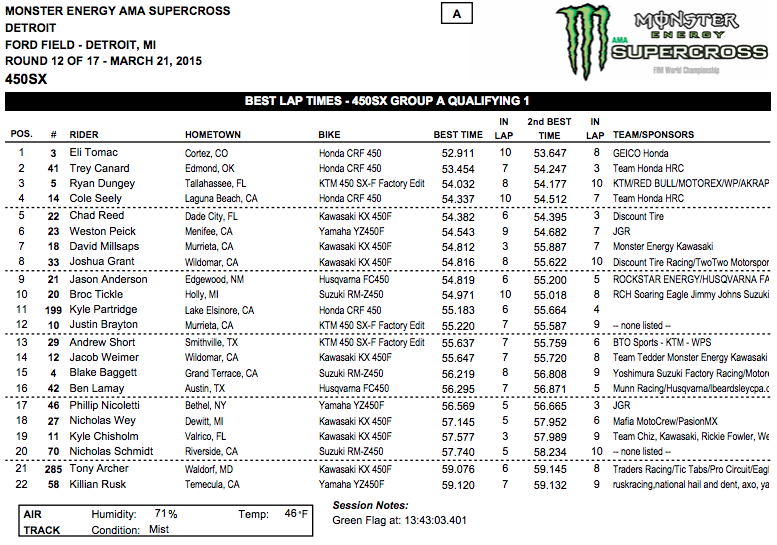 We’re back at Detroit’s Ford Field for round 12 of Monster Energy Supercross for the second-straight year. The Pontiac Silverdome may be in the rearview mirror, but Feld carried over the infamous section that sends the riders up into the stands. As far as the whoops are concerned, the riders are probably breathing a sigh of relief this weekend. Indy was tough, but Detroit holds just two sets of short whoops. The corners will likely sanction most of the passing opportunities tonight. There are three bowl turns, a long left-hand sweeper through the start straight, and a sand sweeper following the track’s only triple. It’ll be interesting to see how the lines develop through the sand section as the day progresses. 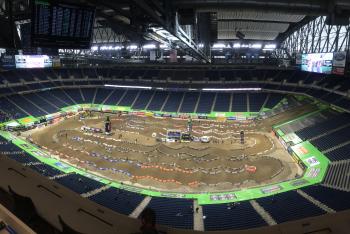