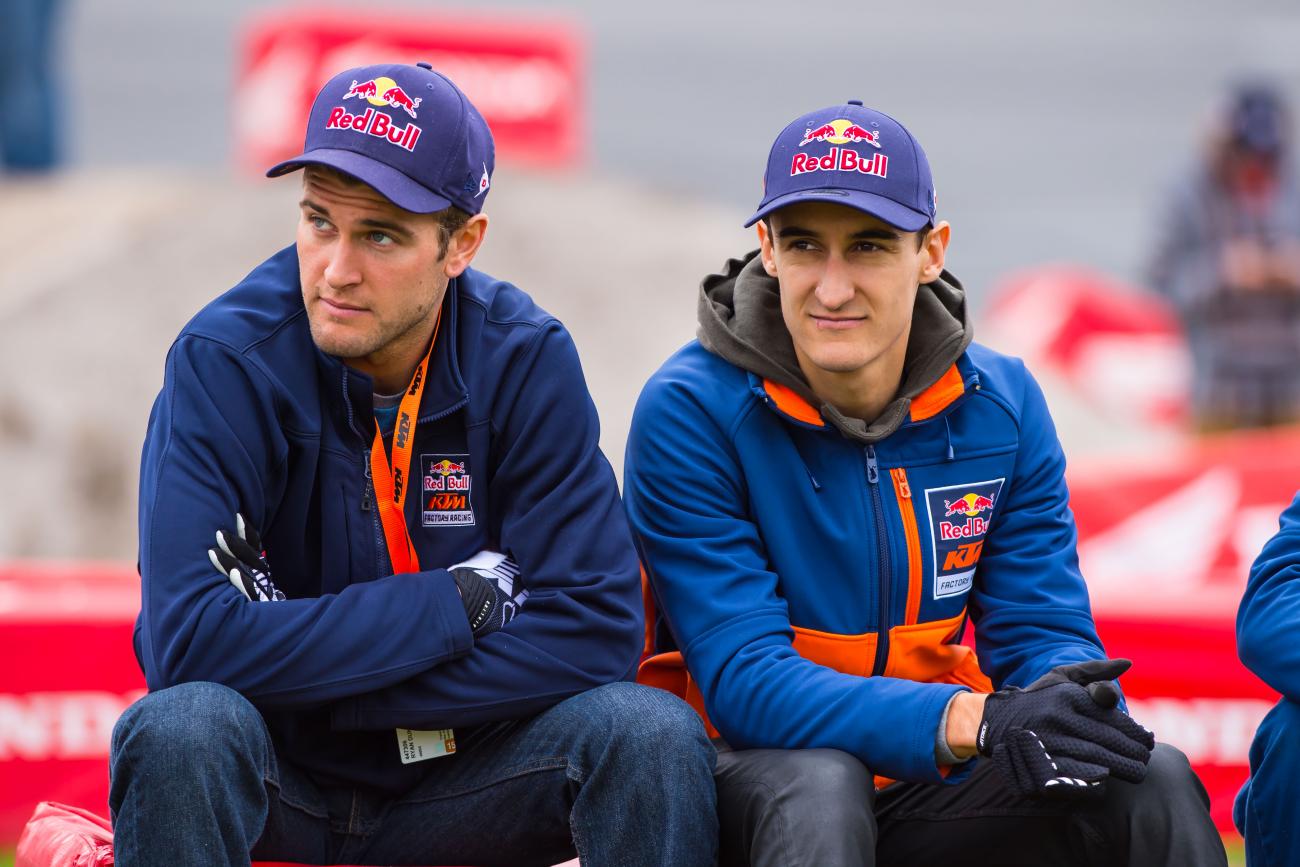 Hello, everyone, and welcome to the Rev Up. In the blink of an eye, we are at round eleven of 2015 Monster Energy AMA Supercross, an FIM World Championship. Following another awesome Daytona race, the series continues with an electric vibe that’s kept it strong all season. However, Red Bull KTM’s Ryan Dungey is on an absolute tear, winning three out of the last four races and accumulating a 40-point lead. They say the championship begins after Daytona, and if that’s the case giving The Diesel a race and a half advantage with seven rounds to go spells trouble to the competition. It actually spells a couple of other things: “It’s over” and “Anything can happen.” If Dungey had been performing poorly, and if there were another guy on a streak, there may be a better chance for a title chase to Vegas, but this is not the case.

Ryan is really feeling it right now. He hasn’t just “been there” in this stacked field; he’s been dominating. His starts are good, he is making quick passes, and he can go as fast or faster than anyone. The bike is phenomenal, his training package with Aldon Baker has been a massive success since round four, and he’s been tough as nails as a racer on the track. Barring injury or a couple of freak mechanical failures, this puppy is done. He can podium and top-five them to death all the way to Sin City. Or, he could win two or three more times and wrap it up early.

This kind of brings me to an idea they are doing in the Amsoil Arenacross Championship—points are reset after round nine and the top ten race to the championship. Could you fans imagine the possibilities if we did the same with Monster Energy Supercross? Let’s say that this weekend in Indy is that last round of the “regular season.” Then, with six races to go, the points reset in the top ten. The regular season event winners get 5 bonus points for each victory (so Dungey would still get a slight edge for having the most victories right now), and then they sprint to the championship during the final six rounds. I realize playing the “what if” game is lame, but with Chad Reed, Cole Seely, Eli Tomac, Trey Canard, and Weston Peick all capable of winning a main event down the stretch, what a chase that could be. Plus, imagine the strategy changes. Would Ken Roczen have bowed out a few weeks ago to rest his sore ankle, so he could return fresh just in time for the stretch run to begin? As it is now, one small mistake has cost him the entire season. The championship has been wrapped up with an event to go more often than not over the past decade, and I think this system would be really great to grow the sport. The television broadcast would really be amped up, along with every media outlet in the game.

Alas, this is not the case. When the season started back at the beginning of January, the rules were the same for everyone, and Cooper Webb, Ryan Dungey, and Marvin Musquin have simply been better at the game. Now, is there still reason to get excited for Indy this weekend? Hell yes. The racing for the lead has been awesome during the first ten laps lately. AutoTrader.com/Toyota/JGR Yamaha’s Weston Peick has been getting good starts and absolutely flying. He hasn’t been able to ride during the week for over a month, so his twenty-lap steam isn’t there, but he’ll have more laps in him with each passing event. He’ll be fast again this weekend in Lucas Oil Stadium, and so will the surging Blake Baggett, Cole Seely, and of course the Honda boys. The urgency for Eli Tomac and Trey Canard to win has been evident all season, but they haven’t gotten the starts and have instead encountered trouble and ended with bad finishes. The Red Riders are way out of it, but they can and will win races down the stretch.

Another guy to keep an eye on is Chad Reed, who very well could’ve won at Daytona had he not slid out. He’s gotten good starts and has had great speed since his win three weeks ago, and he will be putting the hammer down throughout the remainder of the championship.

Over in the 250 East Region, it’s gotten a little ugly as well. Yamalube/Star Racing Yamaha’s Jeremy Martin looks to be the only guy who can match the speed of Red Bull KTM’s Marvin Musquin. Defending champion Justin Bogle needs to find a little more speed, but has posted 3-3-3-2 finishes to remain in the hunt. The GEICO Honda ace won the championship last year with a similar pedigree. Meanwhile, Rockstar Energy Racing Husqvarna’s Martin Davalos hasn’t found his normal speed, but he can still be dangerous down the stretch. Monster Energy/Pro Circuit Kawasaki hasn’t won a main event in 2015, and Joey Savatgy’s opening round third-place is their lone podium in the region. Joey still has some pop, though, so a win is not impossible.

It’s going to be tough to stop Musquin, but I predict some intense racing with these guys this time around.

So, we’re heading to Indy! One of the biggest racing cities in the world, Indianapolis is a cool place top to bottom, and the supercross inside Lucas Oil Stadium always brings a huge crowd. The track and the dirt look awesome in the press day footage I’ve seen thus far. There are two more rounds for the 250SX East Region before they take a break, and it’s getting late in the game for the 450SX Class. Can Ryan Dungey keep up his torrid championship pace? Will the Red Riders strike back, or will we see the sixth different winner of 2015? Time to keep it rolling.