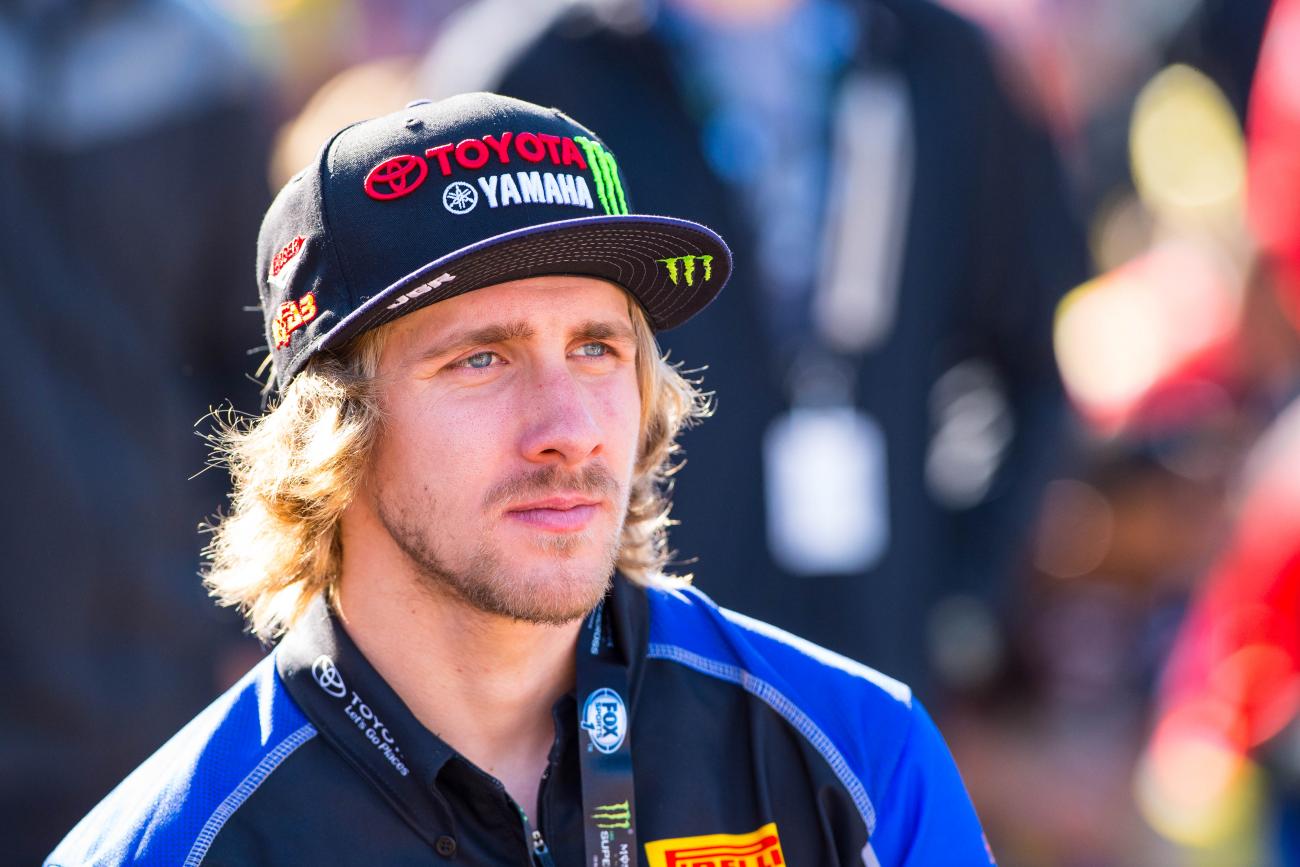 On Tuesday at Lake Elsinore Motorsports Park, just forty-five miles away from Angel Stadium, Justin Barcia unloaded his gearbag and began suiting up for what would be a lengthy practice/test session. Off in the distance his rivals Ken Roczen, Davi Millsaps, Blake Baggett, and several others cranked out lap after lap on the supercross track. As Barcia’s mechanic Ben “Sheetmetal” Schiermeyer affixed a full-on works shock to Justin’s AutoTrader.com/Toyota/JGR Yamaha YZ450F, trainer Johnny O’Mara spoke with his rider about what they planned to work on. Ultimately, after a few multi-lap motos, Barcia, O’Mara, and Schiermeyer congregated together back in what served as the pit area and traded information.

“As a rider you have a set amount of time you want to spend on the motorcycle each week,” explained O’Mara, himself the 1984 AMA Supercross Champion. “Everyone has a program, and Justin is on a race program right now where he rides three days a week. Everybody who is out here today is just working on the mental part of it and getting in their time. Obviously Justin and I are still trying to make progress and get a little bit better every week, too. We’re not happy with our results so far. Sure, we’ve made some progression, like we’ve won a heat race and been fast qualifier. However, the ultimate thing is that we want to win races. That’s what we’re doing here—we’re striving for excellence, trying to get a little bit better...”

Racer X: Justin, is there anything you want to add to what Johnny just said?
Justin Barcia: I agree with all that, for sure. I watched the race from Oakland to see what was good and what was bad and what other guys did better or if I did something better. We come out here and work on those things and try to be perfect and fast and to try and get everything dialed. If the bike is not right, we also work on that. For us, it’s always just about being better because we’re not perfect right now. We need to be better.

Four rounds into the supercross season, your results have been okay and your speed has been good. Your starts, however, haven’t been too good, and you end up having to come from behind in virtually every main event.
Yep. Starts have definitely been a challenge. That’s [part of] going from one manufacturer to another. Everything changes so much, power-wise and all that. When you’re home and training by yourself everything feels good, but when it comes race time things change a little. Starts would definitely help. That showed this weekend when I won the heat race.

The heat race win at Oakland has to be encouraging.
Yeah, for sure. But I rode a little tight in my heat race. Yes, I did win it but I wasn’t a perfect race for me. I was happy to win, though. We’re definitely not happy with where we’re at, but it does show that we have the speed and the capabilities. We just need to put everything together

A lot is being made of how highly competitive the races have been thus far.
Yeah, the competition has always been tough, but when there are ten guys in the same second it shows it can be a little bit more of a challenge. It shows in a twenty-lap race, though, that we’re strong during the whole race. That separates it a little, as it shows who is strong throughout the whole race. It’s such a short race, you know? It’s only twenty laps and everyone is working so hard. That’s why starts have been key this year, and obviously my starts haven’t been on point, but it is what it is and we’re working to get better. We’ll get where we want to be. It’s just going to take a little time.

How do you see the competitive landscape now that we’re four rounds in? Ken Roczen has been fast, but he’s also made some mistakes.
Yeah, everyone is going to have their little mistakes, and that’s why the championship is going to be really close at the end of the year, unless somebody just takes off out of nowhere, but I don’t really see that happening. I think it’s going to be close throughout the whole year and there is going to be a lot of different race winners. It’s competitive. We’re all racers and, for me, I don’t really talk to anyone. To me, they’re just my competitors and I just want to beat them. When I see them or look at them, I just want to beat them and that’s it.

As far as having everything together, has anyone really stuck out to you?
Kenny is fast, for sure, and really good, but he did have a big mistake this weekend, so nobody is perfect and that’s what this sport is all about—it’s about minimizing the mistakes and the bad finishes. Obviously, I haven’t had the best finishes, but we’re not terrible in points. We’re not out of it—that’s for sure.

Sixth in points and 24 points out of the lead, but there are still thirteen more rounds to go.
Yeah, if we pick up some better finishes and some good starts and we’re right there. That’s the thing and that’s why we’re here during the week—we want to have better race weekends. We’re so close.

Would a podium finish help get you over the top?
Oh yeah. I’ve won championships and I know what it feels like, and there’s nothing like being on that podium every weekend. That’s some serious confidence right there. The podium makes a big difference both mentally and physically.

What’s the game plan for Angel Stadium this Saturday?
If all goes to plan, to be fast all day and minimize the mistakes. As long as we’re fast all day we shouldn’t have a problem being up front and battling for wins.

Okay, as far as your riding and speed, and being able to come from behind, on a scale of one to ten, how do you rate yourself right now?
Well, I’m riding good, but I don’t like what’s happening. I mean, I don’t really like anything about the races so far. Yeah, I won a heat race and I like that, and I had fast practice time one weekend and that was nice. Beyond that, I don’t feel like I’ve been living up to my expectations, so I’d give myself probably a five right now because I don’t feel like I’m where I belong. I work way too hard to be a fifth or sixth-place guy. It’s like car racing right now. I need to get out of the dirty air at the back of the pack. I need to get out front in the clean air. When you’re coming through the pack it’s dirty and not fun. It’s also confrontational because you’re passing guys and there’s block passing and it can get nasty. It’s always nice to be in that clean air.