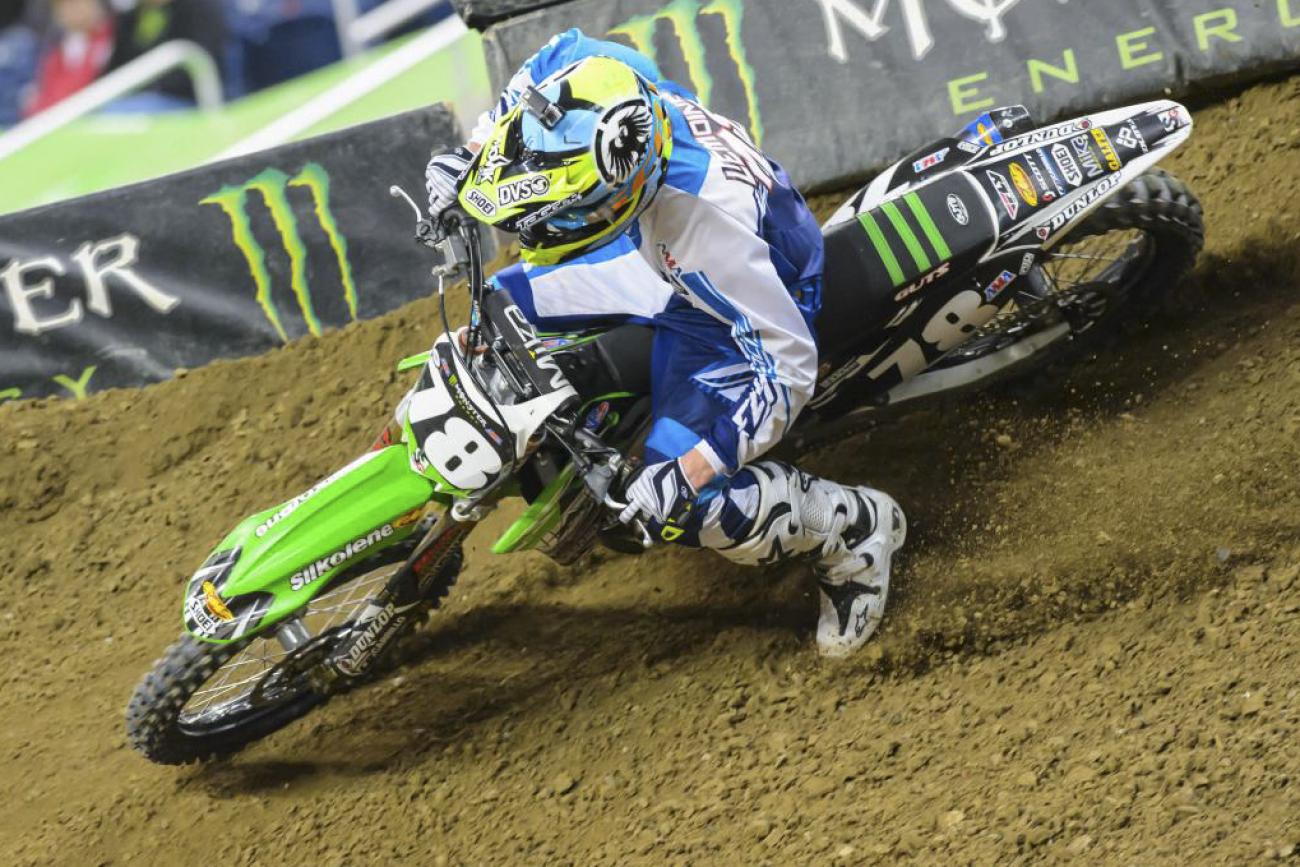 Cross-promotion among other action sports in motocross is nothing new. Volcom, DC Shoes, Etnies, and Vans, among others, have all dipped their toes into moto over the years. Snow-based companies, though,are generally not seen in this sport, but in 2010 Colorado-based Never Summer changed that. The company, started in 1991 by brothers Tracey and Tim Canaday, wants to be go-to snow company of moto. We chatted with their marketing director, Chris Harris, to get a better idea of what the company is about and what their future holds in moto.

Racer X: The major question most people probably have is: Why did a snowboard company decide get involved in motocross?
Chris Harris: The whole idea was born out of our passion for motocross. From a business factor, of course marketing is not a new endeavor by any means, but the more we talk to people about motocross and the more we talk to snowboarders about motocross, we’ve found that there was a huge amount of crossover. People who live in snow areas essentially followed the same pattern that we followed, where when those guys got snow on the track, they’d put their number one passion aside for their number two passion, which was snowboarding. The idea was born from the passion, but there was good business sense behind it. And we also like the fact that most snowboard companies are cross-marketing into other board sports markets. They’re focused primarily on snowboarding, but number two they’re looking at skate or surf. The moto crowd, essentially there’s a lot of shared passion there. So we started slowly and picked up the ball and started running with it. We started by setting up a tent at the national at Thunder Valley. That went really well; it was really receptive, which we expected. That same year we decided to go up to Washougal and to upstate New York to Unadilla because there’s a good snow scene up there. The reception that the moto fans gave us was incredible. We were pleasantly surprised at how many people already knew of our brand and were so excited to see us at moto races. So we started running a program from there basically. We definitely get clowned a little from other snowboard companies that don’t quite understand what the hell we’re doing but that’s fine; we don’t need them to understand. Our core Never Summer rider and our Never Summer customer really seems to get it. Frankly they like seeing our logo everywhere, so when they happen to see a race or they see a photo of Alex Martin or Matt Lemoine and see them wearing our helmet, they get excited to see that we’re there, supporting other athletes from other sports. It’s really working out great for us.

Over the past four years, have you seen a big leap from year one to year four in the response of people at the races and even riders?
The reception that we get at races gets bigger and bigger every year. Our goal was to be the number one snowboard company for that kid who’s into moto and that person who’s into moto. Our outlook right now doesn’t go any further than that. We’re not planning on making Never Summer dirt bikes or anything like that. Now that we’ve been back to some places a few years in a row, people are actually seeking us out, looking at us, coming to see what we’re putting out next year. It’s cool that we’re sort of laying the groundwork for this type of cross marketing. Volcom went at it. They don’t make boards obviously. They make lifestyle apparel and stuff, so we’re a different category than those guys. But even those had their run, and they kind of pulled out. Part of that is because they wanted to get back to their roots and refocus on the boards, skate, surf, and snow. We’ve made some fantastic connections within the industry, if we’d known that the reception was going to be like it has been, we would have done it earlier. So we took a bit of a risk doing it, but it’s paying off tenfold. We just want moto guys to realize that when it’s snowing they can go out and do something else besides ride. They can get that same adrenaline—they can have that good time, even more in sort of a zen-like state, or a more peaceful setting. Not that at all we’re trying to get them away from riding motocross. People need variety in their lives, and they need experiences. I think from our industry we’re able to provide a different style of experience that’s equally as enjoyable and head clearing and all that.

This year, for the first time this year, you started sponsoring riders: Alex Martin and Matt Lemoine. How did you get hooked up with those guys, and what made you decide to get into the sponsoring role of an athlete?
Honestly, that came straight from Never Summer being a grassroots-style company. We didn’t go out and try to get big name riders. We wanted to work with the guys who could use some support, but still provide us with exposure, make names, and things like that. We hooked up with Matt through Novik Gloves, actually. They told us about Matt, and we met Matt and his dad Bruce and sat down with those guys and discussed what Matt’s goals were. We liked him immediately. He wasn’t a passionate snowboarder, but he had snowboarded before. We developed a relationship with Matt over the last year that we’re behind him full force and we want to see him do well. He’s real serious about his sport, but yet you can see he still has fun with it. It wasn’t like a job to him, so he was a perfect fit for us. And then with Alex we actually had a mutual friend who brought us the first rider we signed actually, was Chase Sexton. Chase is as an up-and-coming rider. This kid is amazing. Last year at the Monster Energy Cup we got to hear him on the podium two or three times in front of 50,000 people thanking Never Summer in front of a packed stadium. We were just hooked after that. With Alex, the same guy introduced us and again comes from a good family. The motocross background is certainly incredible. Alex actually enjoys snowboarding. We haven’t really picked riders for results; we’ve just picked riders that we thought deserved some support and we felt good about who they were as people. To us it’s about who they are as people and their passion for it and that they’re still having fun doing it. It’s not a job to them.

You actually got some results this year, especially in supercross, with Matt getting a podium. Do you see a direct correlation after something like that happens?
For sure, we see a little bit of a bump in our social media and our website traffic. Honestly, exposure is awesome, and frankly on the business side that’s why we’re in this sport, but seeing Matt succeed was really the most important thing to us. And Alex Martin was given the Sportsman of the Year Award [at the Lucas Oil Pro Motocross award’s ceremony]. That stuff just allows us to feel proud about what we’re doing.

We’re currently running a mini-series on the Business of Motocross, and it centers around social media and its pros and cons. Have you guys seen spikes in your social media from Matt and Alex?
Absolutely, for sure. We see a spike when those guys tag us and stuff. We’re a very grassroots-marketing brand. We spend less in magazines and mainstream marketing than anybody else. When those guys put something up, we see that spike. We’re sponsoring Vicki Golden as well. She was in the Best Whip contest in X Games wearing a Never Summer helmet. I think that there’s a lot that can be learned from the snow industry to the moto industry and vice-versa. You guys face some of the same obstacles that we do about introducing new consumers and retention and things like that.

What’s the future hold for you guys?
We have, shall I say, a very loose five-year plan in moto. We talk about things all the time. Some of them are probably things that we can’t achieve, and some of them are probably very achievable. Do I think you’re going to see a Never Summer product offering to moto in the next year? No, I don’t see that happening. We prefer to kind of stay out of the product side of that for the time being, but I think that there’s more stuff that we can do with event—maybe combined events, event sponsorship—things like that. Are we looking to recruit any gains out of the moto industry besides being the go-to snowboards for moto people? No, we’re not right now.

You mentioned you went to Loretta’s this year. What was your first experience like down there?
The owner of the company, Tracey, actually went to Loretta’s the year before to go watch some racing and check out the scene down there. The decision was made that we wanted to be fully involved in marketing to amateur motocross riders then. We actually have a small history in moto, which took place about fifteen years ago when Harold Martin, the owner of Motoplayground, came and visited the factory. He actually brought a young Ryan Villopoto along with him, although we had no idea who he was at the time. But Harold was telling us to watch this kid and he’s going to be big. And we did—we dabbled a little bit at that time. Harold ran an ad or two for us in Motoplayground and used some of our product as background stuff. But we didn’t really get it at that time. It took another ten years for us to kind of understand, get it, and see how things come together.

So you met Villopoto as a young kid and were like, “Who’s this kid?” Did you recognize him ten years later when he was winning championships? Like, “That was that kid”?
[Laughs] No, Harold actually had to tell us! We talked to Harold a bit. He supports us like crazy. He actually had to bring it up to us that that kid he brought was Ryan Villopoto. Tracey, who’s a moto fanatic, was kicking himself, like “Oh my god, that was Ryan Villopoto!” He tells that story constantly even though he didn’t know who he was when he was here.

Winter is coming up. Where can we find Never Summer, and what do you guys sell?
We’re a board company. We don’t make outerwear, we don’t make boots, we don’t make bindings; we make the best snowboards in the world, and we make them here in Denver, Colorado. All the information about our company is on our website, which is NeverSummer.com. There’s a list of dealers on there, and you can see all of our products. You can also check out our blog. There’s also a moto page on there, which we’re in the process of updating with all the stuff we did this year, the guys we sponsor, and stuff like that.