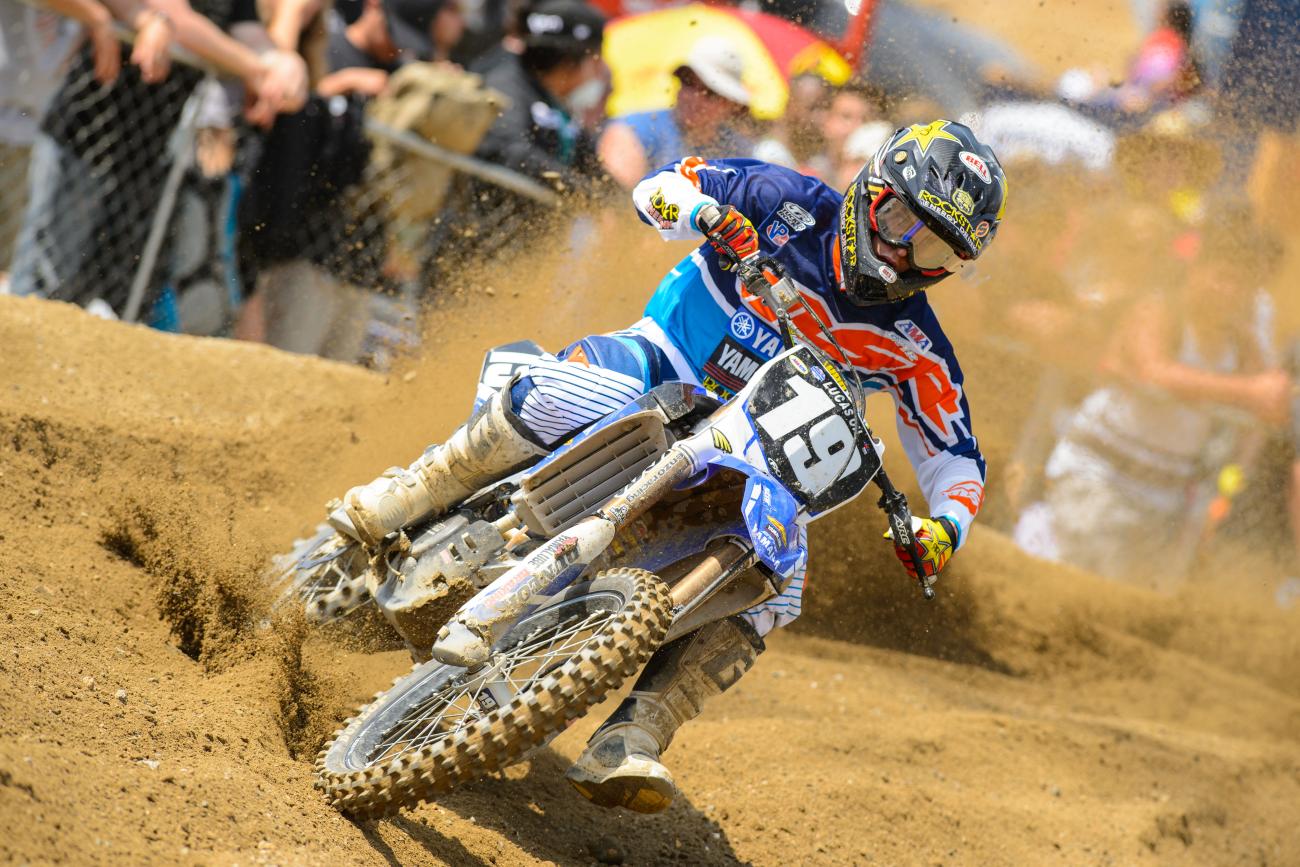 Yamalube/Star Racing Yamaha’s Jeremy Martin either proved or disproved how wide-open this year’s 250 Nationals will be in Lucas Oil Pro Motocross. Since he’s never even won a National before, his 1-1 dominance makes it look like anyone can win this year. But his 20-plus second leads in each race make it look like it’s not going to be so easy for everyone else. At the post-race press conference, he revealed some inside secrets on getting prepped for the opener.

Racer X: I know the beginning of supercross was nothing like you planned. The end got a little better, but at one point, it looked like, man, you needed some work. Today it looked like you’ve done your work.
Jeremy Martin: Yeah, supercross was really rough. I was at rock bottom after round two, unfortunately. It’s just been a process. I knew that it was going to take time and I just kept plugging away and kept my head down and I was able to get a win at the end of the season. I know some of the guys weren’t there, but to go from not qualifying and struggling to get a win, it was just awesome. Then to come here and to go 1-1 on the day is good. The 250 Class competition, they’re fast. Cooper [teammate, Webb] went 2-2 today. Just shows that the Yamahas are working good and they’re fast.

You were down on the podium and Ryan Dungey came running over there. We asked what was going on—a couple Minnesota guys winning both classes in Southern California? Was it just something that really was special for you guys today?
It was pretty cool to go… I think he got first overall, too, so it was pretty cool to go 1-1 overall and bring it home for the Carmichael crew. It was pretty cool. Ryan and I train together at Carmichael’s ranch so we know each other. When he does good, I congratulate him and vice versa, so it’s pretty good.

Have you spent much time at Glen Helen? We know that you have a National track to ride on and you grew up in the Midwest. Is this your first race here?
No, actually between St. Louis and New Jersey I did the California Classic here and I got to race a bunch of amateur kids. I did the concrete starting gate and all 25 of us were going into the first turn. So it was pretty familiar and I got a chance to race my outdoor setup and try it out. It was good. I got to kind of learn the track a little bit. Obviously it was night and day better today than it was when I raced back then. Today there were lines everywhere, there were bumps. I thought it would get a little bit more rough, like choppy, and it did for the second moto, but I’m pretty surprised how well it stayed. The bumps were actually round. I was just thinking that it was going to be nasty, square-edged stuff everywhere but it seems to have that loamy surface to it.

In the second moto we had Broc Glover up in the announcer’s booth with us and there was standing water between the jumps. Track was probably slippery. You were the only one tripling after the finish, then you came up a little bit short and he said, “Oh, he’s going to back it down.” Sure enough the next lap you doubled, but then you started tripling it again. Was it: “A 25 second lead isn’t quite enough, I need a little more?”
No, I think when you’re up front, I just wanted to keep moving forward. I wanted to keep improving and try to learn when I was out there. It’s funny to say that—I cased that and it gave me a little bit of a scare, but I knew I needed to do it again. I figured they were always doing it. I remember [team owner] Bobby Regan was always on my butt for supercross season saying, you need to do every rhythm every lap. So even though it’s outdoors you’ve still got to practice.

Without revealing any secrets, you had a lot of holeshots today. You almost had three! Can you just talk about your starts a little bit? That was pretty incredible.
My starts were really good. It was Zach Bell and I pretty much 1 and 2 going into the first moto. It was kind of funny, the second moto he lined up one outside of me and I was like, “All right, this guy’s pretty good at getting starts so I’m going to have to really be on my game.” We both got out there and we were banging elbows for probably 10 feet past the gate. I was able to get a good start. You need that. These guys are fast; they don’t mess around. The top guys, they’re in shape. When you get a good start and get out there I can set my pace and ride like I know how to and not go through people.

In pro stick-and-ball sports they talk about the swagger, this and that. You had two great starts and then the red flag came out. Did you go back to the line going, three? Did you feel like you could just nail the start again?
Yeah, I thought about that. I was like, man, I had a good start and it’s unfortunate. I didn’t know who was down in the first turn, but I knew I needed a regrouping to get another good start. Cooper was right there behind me in that second moto off the start. I think he was still up there in the restart. But it’s unfortunate, my teammate Anthony Rodriguez got hurt. But he should be back hopefully soon and make a full recovery, and glad to get those Yamahas out there and rip some more holeshots.

I’m sure you came into the race expecting to win or wanting to win, but did you think you’d win like that? We haven’t seen a guy dominate a 250 National like that... I don’t even remember last time a guy just checked out and led every lap by 20 seconds. Did you expect that?
I think what helped me a lot confidence-wise was I got to go back after Las Vegas, I got to go back to the Carmichael farm. I did a bunch of motos there last year riding outdoors. I got to compare myself from old lap times and I got to see how strong I was in the humidity back east. And my setting was good. We made some progress back east. So I knew I was confident coming in. I knew I could ride Glen Helen good. I did a race on it, I felt comfortable, the bike was good. That Yamaha is just handling really good. It’s got some power.

That’s an all-new bike. It’s really the first National ever on this new 2014 bike with the reverse cylinder and everything. Compare it to last year’s bike. Is it just much faster?
Yeah, it’s crazy how much faster it is. It’s fuel-injected so it’s always right there now. The chassis flexes a little more so it gives it a nice, warm, comfortable feel when you ride. We got a good group of people, I got good people around me helping me make sure that I get the bike right for me. I think when you get the bike right for you, you can put yourself in a position to do good.

Got the ball rolling, 50 points, the red number plate on the front of that machine. Where do you think the rest of the year’s going to be something that you’re going to go for? You’re undefeated now. You’ve got two wins in a row.
I’m not worried about being undefeated. I’m not worried about any of that. The red plate, it’s just a different color background to me. Next weekend we’ve got Hangtown. We’ve got two practice sessions and two motos. I’m looking forward to going moto by moto. I want to do as good as I can and try to win as many motos as I can and get as many overalls as I can. The championship is not even in my mind.