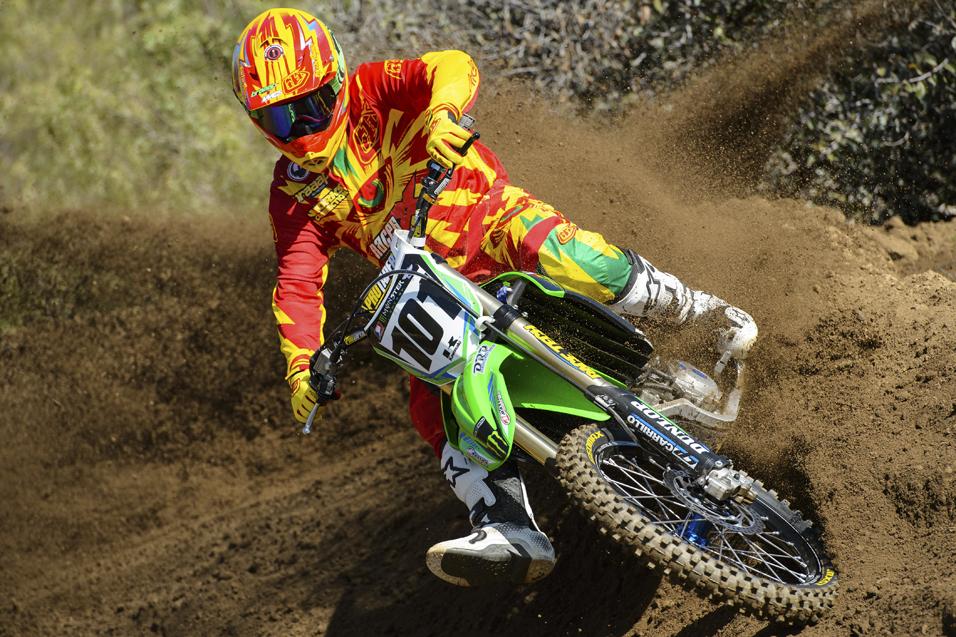 Got a couple of burning questions: (1) Am I the only one out here that is completely blown away by RV's weekly GoPro videos? I had my CR450 (with a 13/48 tooth sprocket combo) pretty much tapped-out this past weekend (on relatively smooth ground) and I swear I was not going as fast as RV does on the roughest of tracks. What is your take on his GoPros? Are you as scared (I mean impressed) as I am? I get arm pump, start sweating and my heart rate spikes just watching those.

(2) What's up with Chad Reed? I know he said in a recent interview that he had identified what "it" (the problem) is, so what in your estimation is "it"?
Keep up the great work. Ask Ping is often (and somewhat pathetically) the highlight of my Friday.

You have to tip your cap to both Ryan and GoPro here. Villopoto is in the prime of his career and absolutely crushing it right now. When you watch Ryan ride a bike, live or via GoPro POV, you are watching the very best rider in the sport at the moment. And just like when a civilian who goes for a ride in the back seat of a fighter jet and fills his flight suit with poop, or at least covered the front with vomit, it’s not uncommon to be shocked or afraid of RV’s speed. Just try not to fill your shorts with dookie.

What’s up with Chad Reed? I don’t have a clue. He was slightly off in supercross this year and I expected that to continue through the summer. But his finishes have been way off from what Chad expects from himself and what he’s capable of historically. He likely has some physical malady that he is working through and hopefully he gets it sorted soon.

Glad you keep coming back each Friday, as pathetic as it may be.

Possible question for your Friday report:

What’s your opinion on NBC and other major networks covering racing? I’m sure that one of the major networks also own Speed and Fuel TV, however it always seems that Speed and Fuel cover live racing so much better than the basic major network coverage. I’m not sure how it appeared in other time zones this past Saturday, but here in the Pacific Northwest I felt like the 2nd 450 moto, which was live on NBC, covered maybe 8 minutes of a 36 minute race. Between all the commercials, breaking news, and “feel good” stories for Tickle and The Stewart Family we hardly got to watch any of that 2nd moto. I was so pissed I wanted to punch my wife in the throat.

Not only was this race broadcasted poorly due to the interruptions, NBC/CBS seem to ruin the live racing every time they have the rights to a broadcast it, by airing the race the next day instead of letting Speed/Fuel show it the day of LIVE like they do every other race.  Seems like even when they do air the race the next day it’s delayed because of golf or a toothless NASCAR race running late.

I understand we need the major networks to cover racing, but how can we get them to leave it to SPEED who in my opinion does it right?!

Please don’t ever punch your wife in the throat. Your anger would be better utilized if you focused on a solid shot to the solar plexus. I’m kidding. Never hit woman, you idiot. Now onto the racing… You fickle fans will never be happy. Do you realize how far things have come? Old guys in orange helmets used to have to wait weeks after a race to catch a brief recap on Moto World or read about it in Cycle News. And they were lucky to get color images of the race! And they had to spend days riding on the ol’ “Iron Horse” if they wanted to actually go see a race. And soda was a nickel and gas was free and weekends were spent taking Betty Lou to a “talkie” down at the Nickel Odeon. Of course that was back in Ot two, before the big war.

But I digress. Sure, SPEED and Fuel do a better job showing you racing because they are catering to racing fans and they know that you want to see the racing, not some sappy segment about how Broc Tickle is sad because Hart made him get a tattoo of a unicorn on his low back. NBC doesn’t care about the racing. My guess is that at least half of them would spell motocross with an “R.” They are trying to appeal to the folks who watch NBC, more people who would throw an “R” in there all day long. At the end of the day the sport is being introduced to more people who wouldn’t normally flip to Fuel TV to watch dirt bikes, and that is a good thing. The sport has to grow if riders want to continue making seven figures and driving their own tour buses to the races. That means you might have to change the channel a couple times to get both motos. Deal with it… it will keep getting better.

I'm tired of seeing all the things I buy being made in another country. I have now made a conscious effort to buy everything with the label “made in the USA,” this does not include American companies products made in different countries. So, what I need from you is a list of the American moto industries that manufacture all their product right here in the good 'ol U.S. of A. so I can be a more confident, knowledgeable consumer of all the great moto product our country can be proud of. If this request is too daunting and time consuming I would understand, but please, at least give it a thought.

I love your enthusiasm. Sadly, you might end up riding a Cannondale and wearing Lee Dungarees and a flannel shirt if you stick to your USA-only policy. There are some great companies that do it all right here at home and I suggest you start there when you are looking to buy. As far as bike manufacturers go you only have Zero [electric bikes, which are very impressive] and maybe ATK, though I’m not sure they make bikes anymore. There was also a brand called Highland that was briefly making [and blowing up] bikes but I haven’t seen those lately either. Apparently good dirt bikes can’t be made on these shores. After market companies like Works Connection, Pro Circuit, FMF, Braaap Bar, uh, umm… I’m sure there are more. There’s, uh. Hmmm. I’m not sure there are others…I’ll have to get back to you on that.

Have a question for Ping? Send him an email at ping@racerxonline.com.