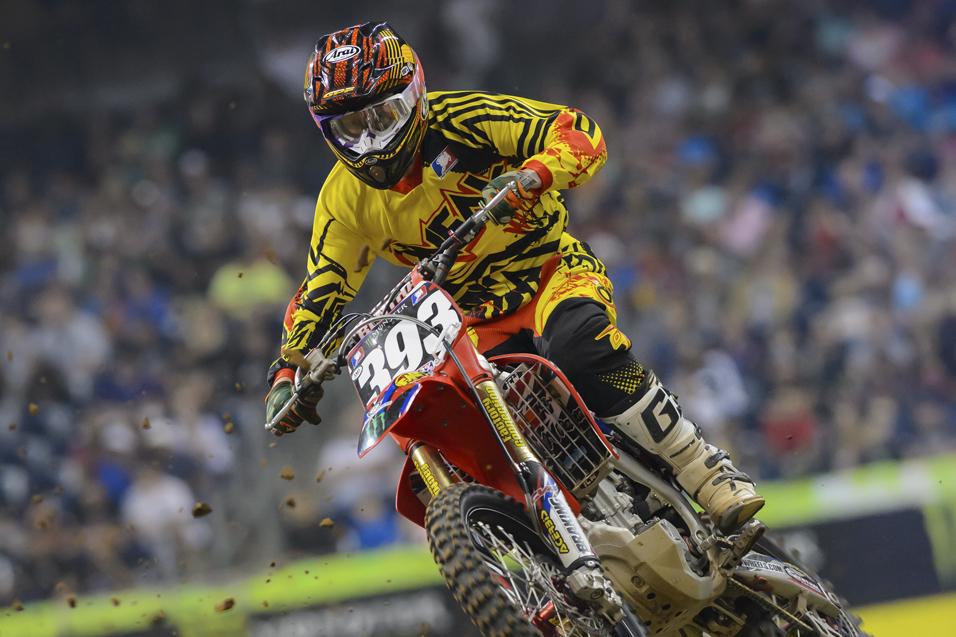 Daniel Herrlein wasn’t a highly sought after amateur phenom. He didn’t have Pro Circuit and GEICO Honda courting him. But the humble, soft-spoken Ohio native, through hard work and determination, has carved a place for himself in the professional ranks. Last weekend in Houston, Herrlein accomplished a goal many privateers never achieve by garnering a top ten in Monster Energy Supercross. We caught up with the A&Y Racing backed Honda rider earlier this week to talk about his career night. Meet Daniel Herrlein.

Racer X: You weren’t really a heralded amateur rider, but you have begun making a name for yourself over the last couple years as a professional. Can you fill us in on your path?
Daniel Herrlein:
I’ve been riding ever since I was probably five years old. I started off on junior 50s and worked my way up through all the amateur classes. I made Loretta’s a couple times on 65s. Then I came down here [Georgia Practice Facility] about four years ago, and made Loretta’s again two years in a row. The first year I went in Schoolboy 1 and 250 B Stock. I can’t really recall how I did. Then the very next year I qualified in the 250 B Stock and Mod class and I got an 8th overall in the Stock class, which was my best finish. So, not really the best amateur career.

After Loretta’s in 2010 I went to the Baja Brawl for my first A race. I won that and then that Spring I got a 250F and started doing all the pro-ams. I think I did four of them. Got my pro license and then that summer [2011] is when I tried my first year at the nationals. The first year I did okay. I didn’t qualify for any except the last one, at Steel City. In the first moto I crashed and broke my collarbone. I was out for that. After that I came back to GPF that winter I tried supercross for my first year. My first year in supercross, I did all right. I made two mains, which was cool, and I got a 17th in Atlanta and a 19th in Houston. Then last year in outdoors I did all right. I was consistently in the top 30 and I consistently finished around 26th-30th. I wasn’t really in the best of shape, but I’m learning year-to-year and trying to put my head down and trying to do better and better. As soon as outdoors were over I came down here and started training for this year’s supercross. I’m pleased with how this supercross season is going. I just want to keep getting better and better. 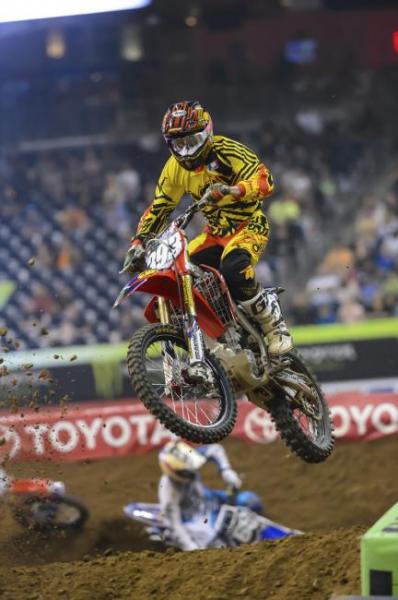 Looking back five or even ten years ago, did you ever see yourself achieving a top ten in supercross?
No, not exactly. I definitely know I have the potential to. Actually, back when I was on 50s and stuff I remember going to some of the local races and I was watching the 65 riders out there and I was like, ‘Man, I’ll never go that fast.’ And then sure enough I just kept riding, kept getting better and better, and here I am today.

How were you feeling emotionally after and during the race? Were you aware that you were even inside the top ten?
Yeah, I was. In Indy, I was actually in a top ten position and that was the first time I’d ever gotten a good start and was able to put together some laps in the main event. Unfortunately I crashed on lap 12 and finished 17th, which was my best from this year and last year so far. So I’m kind of bummed about that. I came into Houston knowing that I can run up there with those guys and I just got a good start and tried to push forward. I rode consistent laps and I was able to pull it all together.

Growing up in Ohio did you race a lot of arenacross? A lot of arenacross guys come from Ohio, Jeff Gibson, etc. Is it something you can accredit to being more familiar in supercross?
No, I actually didn’t race much arenacross. There was one arenacross in Wheeling, West Virginia a while ago when I was racing. I’ve always just kind of liked the real technical rhythm type stuff in supercross. Even growing up I’d always like to go ride tracks that were more jumpy and technical.

I know you’re basically a privateer, but you are also receiving some help from A&Y Racing, correct?
I do. Hank Arnold, who owns the team, loves the sport. He rides for fun. His son and daughter all ride. They enjoy going to the races with me. I really couldn’t do it without his support. He really helps me out a lot.

How long have you been training down at GPF? And how big of a benefit has that been? Obviously, the weather in the south allows you to train year round, compared to Ohio.
Oh, yeah. It’s way better down here. I enjoy it. I’ve been down here, this is my fourth winter down here I think. There is so much improvement from being able to come out here and ride everyday. All you can do really is ride and work out and it helps being around people that have the same goal. Whereas back home your friends want to go out, have fun, go to the malls… Down here you’re surrounded by people who want to ride and go road biking or mountain biking, etc. There are a lot of benefits coming down here and getting a program together. 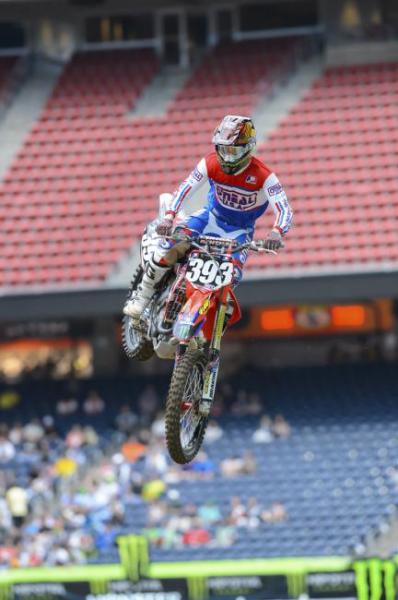 Herrlein has made four mains in 2013, and is currently 21st in points.
Simon Cudby photo

Right. It just gives you that discipline and structure you might be lacking if you’re back home?
Definitely.

Obviously a top ten is a huge deal. Does this change your expectations or your thought process going forward?
Yes and no. I know I can run up there. I know I could be a top ten guy. I improve each week. I just want to go into the Supercross races and the outdoor races and just give it my all and continue to get better and better each week. As long as I can continue to give it my all then whatever happens, happens. There’s going to be bad races, but you try to minimize those.

There are two rounds left in supercross, but a lot of riders have already begun preparations and testing for outdoors. Do you already have a plan in place for the summer?
Yeah, I’ve been starting to ride the outdoor track a little bit. After Indy I had a couple week break. That’s when I really started to head out to the outdoor track and start to get some riding in. After this weekend in Minneapolis I’ve got another couple week break so I plan on getting back out on the outdoor track and doing some 30-minute motos and just trying to get ready for the outdoors. For the outdoors I’ll probably do the same thing I did last year; I’ll do Millville and everything east of there.

Thanks again, Daniel. Who would you like to thanks for helping you out this season?
I would like to thank A&Y Racing, O’Neal, Novik Gloves, 100% Goggles, Factory Connection, EVS, Renthal, FMF, Dunlop, Arai Helmets, 139 Designs, Wiseco, GPF, Monster Energy, Hinson, Gaerne Boots, Twin Air, Xceldyne, and my mom and dad.