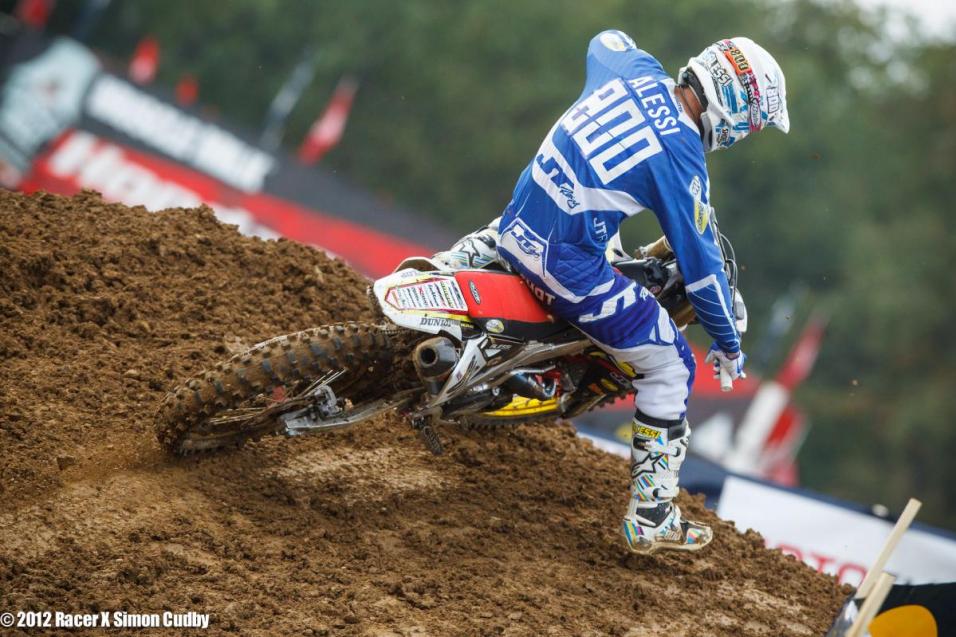 Round eleven of the 2012 Lucas Oil Pro Motocross Championships is going off today under perfect weather conditions at Steel City Raceway located in the town of Delmont, Pennsylvania. The series is winding down but the racing is still intense as the 250 Class has been exciting each and every weekend. And the track is prepped perfectly to provide the toughest challenge to the teams and riders.

Monster Pro Circuit’s Blake Baggett has almost a moto lead on GEICO Honda’s Justin Barcia with four motos to go but he’s coming off a (for him) uninspired ride at Unadilla. Baggett’s got a nice hold on things here but keep an eye on his lead as the pressure rises.

Team Red Bull KTM’s Ryan Dungey has already wrapped up the 450 title and has won an astounding eight straight races and 15 out of the 16 motos but this weekend, he had his worst day on the year in qualifying ninth fastest on the day. Maybe this is the weekend where Dungey has some real competition? Stay tuned.

As usual, the track here at Steel City was soft and not quite formed when the riders went out for the first set of practices and the second practice times were the ones where most of the racers set their personal bests.

After more than a few times coming up short in second place in timed qualifying, Team MotoConcepts Mike Alessi captured the prestigious Oakley Time Bomb award for the fastest qualifier on the day in the 450 Class. Rockstar Yamaha’s Nico Izzi was second, Monster Kawasaki’s Jake Weimer was third and Jeff Ward Racing’s Josh Grant was fourth on the day. We’ll see what happens in the motos when the gate drops but it’s looking like Steel City 450 Class is going to be epic.

The winner of two out of the last four motos, GEICO Honda’s Eli Tomac absolutely destroyed the field today in 250 qualifying with a time that was almost two seconds faster than the next guy! Not only did Tomac set the fastest time out of everyone, his second best lap time would also have stood as the best time. Tomac’s been on fire and the two-week break after Unadilla has done nothing to slow his momentum down. After getting his first moto win of the year at Unadilla, Red Bull KTM’s Ken Roczen set the second fastest time of the day and will get second gate pick as well. After him was points leader Baggett and Unadilla winner and Roczen’s teammate Marvin Musquin.