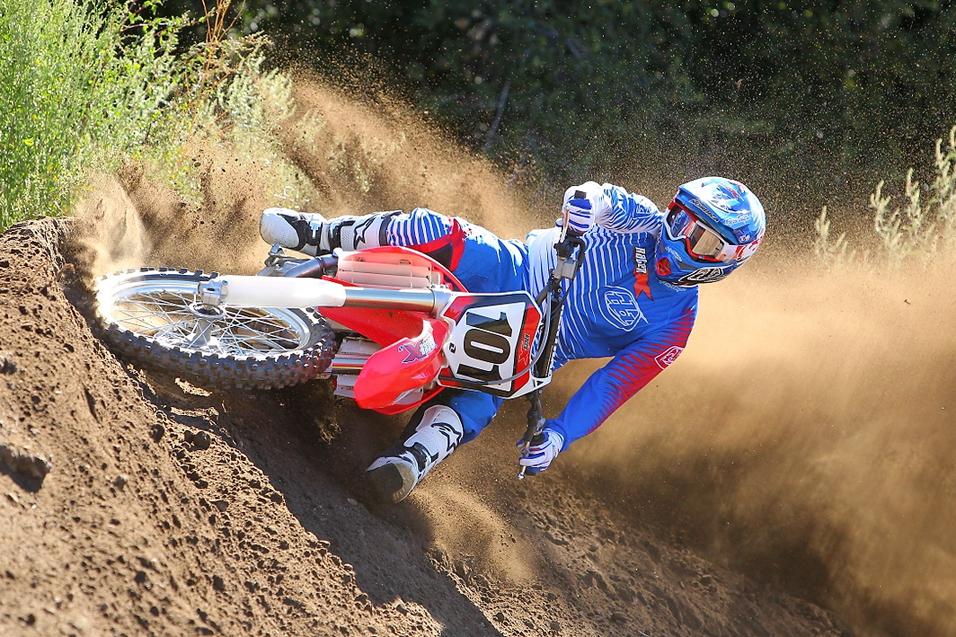 Congrats on your Paramedic studies and graduation. I am near the same age as you and am looking at going back to work in emergency medicine as well. I am a building contractor now but after 15 years am missing helping people and going to calls on what I have/had deemed the mobile Christmas Tree.

Here's my question. I see these tracks MX and SX alike and wonder where these bizarre designs came from. I grew up on Guam where we had 1 national level track (Johnny O', David Bailey, Kent Howerton, and Chuck Sun raced it, I believe, I was six so forgive my facts). My point is this: Motocross broken down is basically motorcycle and cross the country hence the word motocross and Supercross was the same thing just put inside of Roman type stadium where the spectator could watch the action from a panoramic point of view.

What are these things these guys are racing on? They are groomed. They are watered. They are, what? Motocross? Motorcycle & Rider versus countryside versus competitor versus what?  It doesn't fit the definition I know. Please shed your insight. I love Unadilla and Southwick but what is going on.

You sound like the kind of guy who likes tradition, history and heritage. There’s nothing wrong with that, fundamentally, but you have to understand that things evolve and improve over time. You still churning your own butter over there on Guam? Still talking on a rotary phone? Still getting up and walking to the television to change the channels? Of course not… that would be barbaric. Motocross started as a short course over natural terrain, just as you stated. And then it began to evolve. Watering and track prep improved spectating and safety for riders. As bikes advanced technologically, so did the tracks. Jumps got bigger and eventually, the sport was taken inside. Jumps got even bigger. Courses were designed to challenge riders and entertain spectators and guess what? The sport started growing.

So, what are these guys racing on? Modern supercross and motocross tracks, I guess. While I like to see tracks like Unadilla and Southwick left natural and rough too [what was with that rhythm section at Unadilla this year?] I think that most of the changes are necessary and good for the sport. Don’t let your dislike for change ruin your passion for the sport. At the end of the day motocross is still man and machine vs. course vs. competitors. Just the way it should be.

How is it that Ken Roczen who is only 18 and Marvin Musquin who have only been here a year speak better English than Roger D? That dude has been here, like, 50 years and I can still barely understand him, lol.

Good point. The only thing I can come up with is what I like to call the Jean Claude Van Damme factor. JCVD is really the only major [I’m using the term loosely] Belgian movie star I can think of and, like the smell of spilled Belgian beer, he could never quite shake the stank of his native accent. Musquin is French and while he may always sound a bit like inspector Clouseau he has a decent grasp on the language. Roczen probably grew up watching MTV Europe and could sing dozens of songs in English from a young age, including 99 Luftballons. I agree with you that ol’ Rog has hit a plateau with his English language skills. But I guarantee you he speaks at least three languages, which is two more than I have down. How about you?

Why is it that so many top motocross racers are little guys? I don’t mean to insult anybody (you included) but if you look through a list of the sport’s best there are very few that stand above 5’10” tall. In any other sport that height would make it nearly impossible to compete.

P.S.- Nice push on DMXS the other night. That was impressive.

For the record I just want to point out that Mike Bell, Ron Lechien, David Bailey, David Thorpe, Jimmy Button, David Vuillemin and Travis Preston were all well over six feet and they reached the pinnacle of the sport. Yes, it took me every bit of ten minutes to think of that many tall riders but I wanted to point out that not every successful rider borders on dwarfism. That said, it appears there are some distinct advantages to being on the shorter side as a motocross racer. Maybe it’s the lower center of gravity or the fact that your legs don’t get in the way in turns? Or when you crash you can curl into a little ball instead of letting centrifugal force spread you out like a starfish before you hit the ground? I would suggest that the perfect height is around 5’10”, ala Jeremy McGrath and Stefan Everts. Another huge perk of being short is post-race career options…Horse racing or midget tossing, anyone?