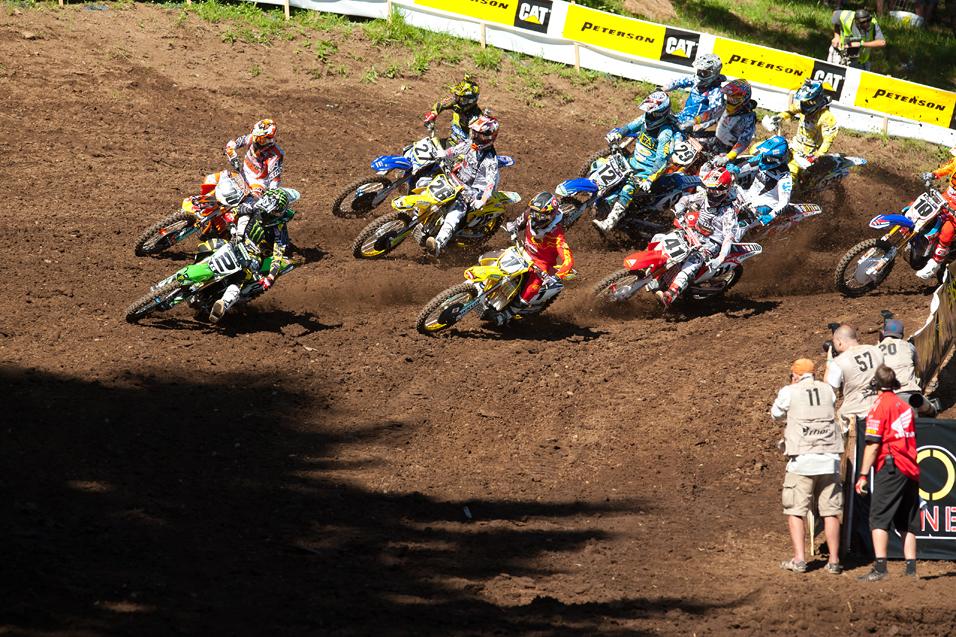 Hello, everyone, and welcome to the Rev Up. We blink our eyes and another round of the 2012 Lucas Oil AMA Pro Motocross Championship is upon us. While Millville was vacant of intelligible memories, I was pleased with the event. I can’t think of a better track surface to race on, and the layout with her 32:1 ratio of natural terrain and human intervention produced excellent live television. Don’t forget how important that is for our trade, or to be grateful for getting to see Ryan Dungey throw pan (total pan) over a table in victory. In HD. I actually paused my 60” LCD Samsung and sent that image to instagram, of course with “Kelvin” effect.

My how hyper-aggressive yet, beautiful “racing” and our capacity to appreciate it has become. Freaking live in HD showcasing all of the snazzy track side banners and all of the mega stars of pro motocross aboard their nano-concentrated gasoline burners. Maybe I’m alone here, but I think it is so cool. I literally was shaking my head watching it with a huge smile. My favorite moment of the weekend was the opening shot of Kyle Regal drilling a start from the far inside gate. To have been in a similar situation, albeit on a slower bike on a far lower platform, it got me up on my feet. Hell, all of it did! From watching the old men score points, to marveling at the potency of the 250 boys, to wincing in pain as Nick Wey’s KX450 stacked it up into the creek...it is simply a stellar show. And the show rolls on. Scenic and historic Washougal is on the board this Saturday and a brand new opportunity to see the madness arrives. 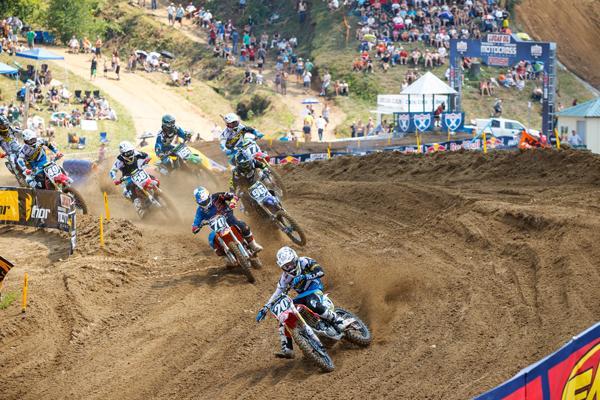 The charge has left Millville in the rear-view and heads...
Simon Cudby photo

Scenic: The rolling green landscape painting the Northern Pacific is enough in itself. See that, then think about Horsepower Hill and the rear tires of the boys sending black soil into the goggle lenses of their competitors. Think about that ominous first turn and the cacophony funneling into it. Probably one man on the outside with a prayer and a half dozen on the inside thinking, “Holeshot.” Washougal. The shadows through the trees haunt, but the sunlight in the clear dazzles. Perhaps the most unforgiving and misleading soil compositions of the tour, the passage of 30 years of motocross and “Father Time” create a special challenge. And after they water it pre-moto, it is simply an evil son of a bitch. (Dust is worse than two laps of slime. Stamp it.) That is kind of what it is going to look like this weekend. Sounds good to me, son.

Historic: Back in the day I was always the most excited about my Motocross Action that featured the Washougal National. It was a time when my heroes started making waves as pros. It’s where Jeff Emig ran #747 for the first time and lead the first moto for a spell. It’s where Robbie Reynard blew our minds in Terrafirma. Washougal is where we saw Damon Bradshaw somehow leave it pinned on the outside of the tight left hander at the bottom of the hill. Coincidentally the same corner Emig blew the side panels off of Doug Henry’s YZ400. Remember? Oh, not to undermine the commissioner of “What’s stopping you?” One of the greatest moments in Washougal history is Mike “The Rock” Larocco and Henry sending it up Horsepower Hill whilst rubbing elbows and swatting at their handlebars like they were fanning wasps. How about the image of Ricky Carmichael literally stretching his fingers in vein as he tried to climb back on board of his hopelessly swapped out RMZ450 in mid-air. Do. You. Remember?

That canvas should suffice. 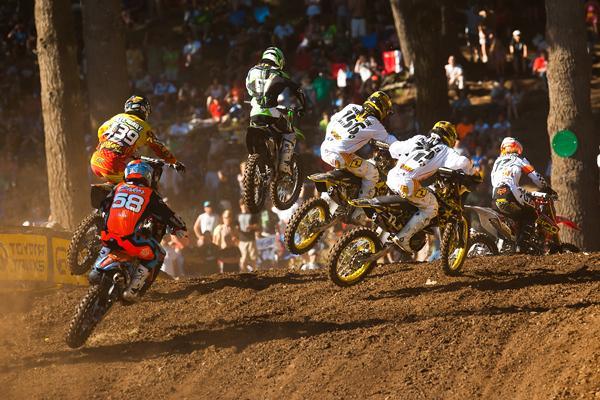 Hey, when the sun is on your face the shadows fall behind you. And right now, the rays tanning the 2012 Lucas Oil AMA Pro Motocross Championship require SPF450. Damn, I know that is uber cheesy. It’s all crazy. I’ll wager to presume that a tribe of you reading this far ride, race and know the feeling. Try to emulate holding on to the back of a factory 450 going up that damn hill. Go ahead and scrub that floating table-top, then grab 4th and get ready to see Elvis. The alphas will float it up and over the precipice about 20 yds from the top. You know what these cats feel?! Back in the day they would hang their asses off the rear fender reaching for more, but this Saturday afternoon they will be like a gerbil strapped to a rocket ship. All the same a select few will indeed be reaching for more.

Gates are going to drop. Hell will be unleashed. Time for Washougal.