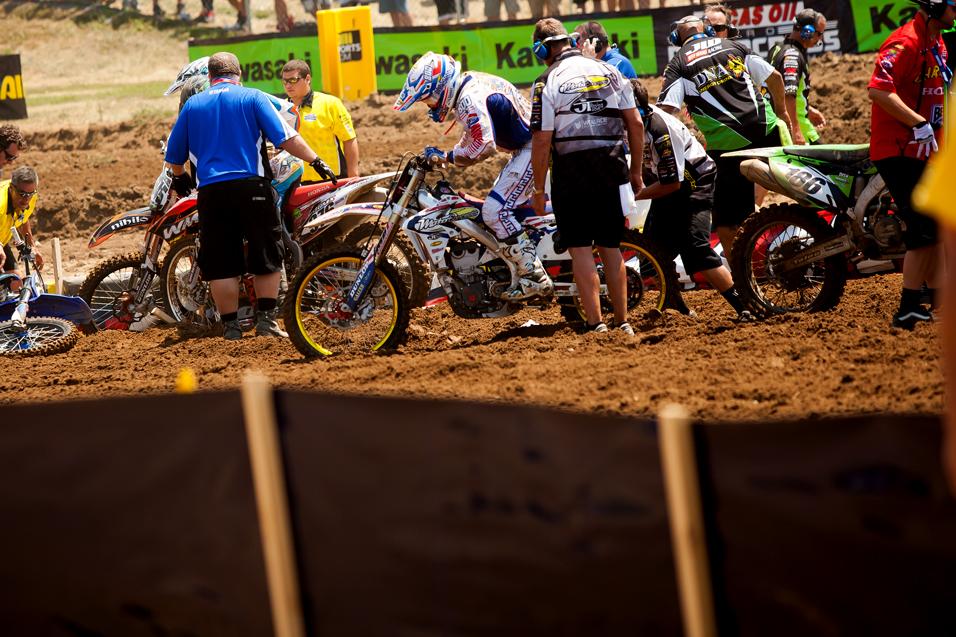 Four years ago at RedBud, Mike Alessi survived one of the worst crashes the circuit—and the series—has seen. Alessi, then a factory Suzuki rider, crashed while battling for the lead in the second moto at the bottom of the big sky jump. He crashed on the face of the following jump and ended up right in the middle of the track in the landing section. Most riders missed him, but not all. (YouTube footage is here).

From the crash evolved the wheels-on-the-ground flags you now see at every outdoor national. But it also seemed to start a string of setbacks and injuries that have plagued Alessi since. He lost a direct shot at the 450 title the next year when he broke his leg two days after winning the Freestone National—and he hasn't won since. Last year on a KTM he appeared ready to challenge again for the Lucas Oil 450 Motocross title, only to crash himself out in practice at Hangtown.

On Saturday, Alessi was back at RedBud and back on a Suzuki. But he's no longer a factory rider. In fact, he races for MotoConcepts as a full-on privateer, the factory giving him nothing in the way of assistance—the bike he rides isn't even yellow. And yet it's Alessi, not James Stewart or Brett Metcalfe of the Yoshimura Suzuki factory team, who is the highest-ranked Suzuki rider in the standings. Granted, Metcalfe is out and Stewart is just coming back from a wrist injury, both having had their own fair share of misfortune in the past few years, just like Mike. 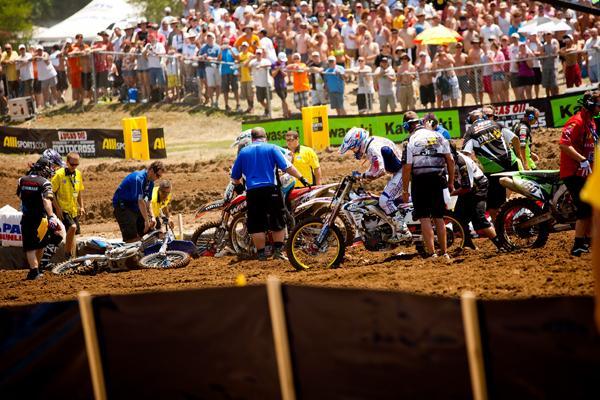 Alessi was involved in another big crash at RedBud, but unlike four years ago he was able to recover and charge to an 11th place finish.
Andrew Fredrickson photo

Off the start at RedBud in the first moto, Alessi's bum luck returned when he plowed the front wheel while charging the loamy inside on the start, triggering a chain-reaction crash that some were calling “the big one” we haven't had in a few years. Guys were pinballing everywhere, with Alessi seeming to be lifted across all of them as he tried to save his own crash. It was almost as ugly as 2008, only this time Alessi got up, thankfully, and charged from thirty-fourth to eleventh at moto's end.

For the second moto he limped to the line in obvious pain, took a spot in the middle with his later-than-usual pick, and then did what we all expect Mike Alessi, arguably the best starter in motocross history, to do: grabbed the holeshot!

His lead didn't last long, but his heart did. After holding off Red Bull KTM's Ryan Dungey as long as he could, Alessi focused on finishing strong, which he did—second place, ahead of James Stewart, ahead of the Honda factory-supported riders, and ahead of the Kawasaki factory-supported riders. Afterward he sat on the side of the podium, missing a podium spot by two with his 11-2 scores. He didn't have a ride back to the pits either, as his bike had gone to impound. So he limped into an official's mule and hitched a ride back to his motor home, his wife, Danielle, right there with him as always. He was stoic, injured yet satisfied with the race he had just run.

Mike Alessi hasn't given up on someday becoming the best motocross racer in the world, even though the odds get longer with each passing season. But whether you like him or not, what #800 did at RedBud was downright heroic. He didn't win, but he sure as hell didn't quit either. Come to think of it, he never does.