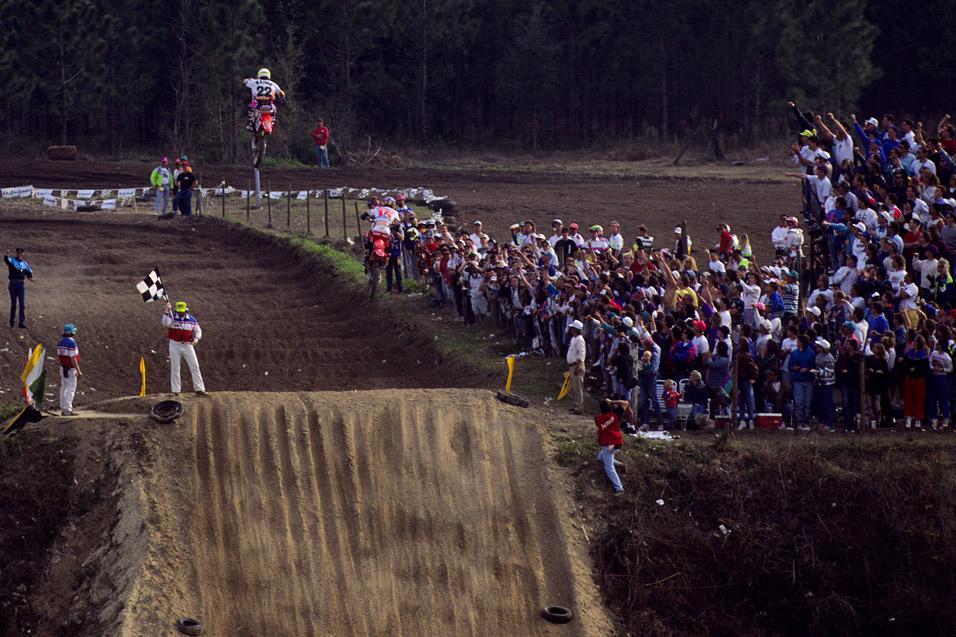 Not hyped up enough for the opening round of the Lucas Oil Pro Motocross Championship, sanctioned by AMA Pro Racing, at Hangtown?

Let’s pump you up even more with a run down of some superb opening round races:

10. 1999, Glen Helen: If you watched this race, you would swear you were witnessing history. Sebastian Tortelli, the ’98 250 GP Champ, moved to the U.S. for 1999. He got off to horrible starts in both motos at the Glen Helen 250 National opener, but came from outside the top 20 both times to track down the fastest riders in the sport and win both motos. The Frenchman looked set to dominate, but he was never able to find that kind of magic again. [Check out full results from this race HERE]

9. 1997, Gatorback: This is similar to Hannah’s breakthrough win 21 years earlier. Ricky Carmichael came to the 1997 National opener in Gainesville, Florida, with a superb amateur record and a 125 SX win under his belt, but no one knew what to expect in his first full pro season. He followed defending champion Steve Lamson across the line in moto one, then checked out in moto two. He won an AMA National title for the next ten years. [Check out full results from this race HERE] 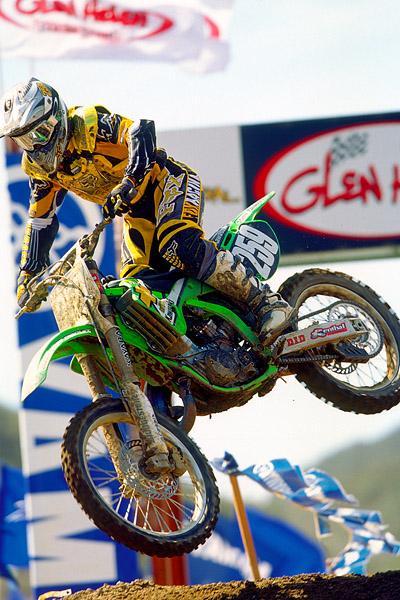 At just 16-years-old James Stewart made quite the splash at the 2002 opener.
Simon Cudby photo

8. 2002, Glen Helen: At just 16-years-old, James Stewart makes his pro national motocross debut at Glen Helen. Like RC in ’97, Stewart battled defending champion (Mike Brown in this case) and went 1-2 to win the overall in his first try. [Check out full results from this race HERE]

7. 1988, Gatorback: A great battle for the 250 class win between superstars Rick Johnson, Jeff Ward and Ron Lechien. Late in the race, RJ’s rear brakes go out, and Ward and Lechien sneak through to steal the top spots. [Check out full results from this race HERE]

6. 2004, Hangtown: Fresh off of a thrilling battle at the 2004 supercross finale in Las Vegas (which can be seen here), Stephane Roncada and James Stewart put on another tremendous show (which you can view here) just two weeks later at the Hangtown Motocross Classic. Roncada was leading the second moto when he was caught by a charging Stewart, but Roncada fought back. For the majority of the moto the two went back and forth, switching up lines and exchanging the lead before Stewart eventually opened up a gap as the race entered its final stages. While the racing itself was electrifying, the fact that someone was stepping up and challenging Stewart, who was an undeniable cut above his competition in the 125 class, made the clash that much more exciting. For the rest of the summer, no one could touch Bubba. [Check out full results from this race HERE] 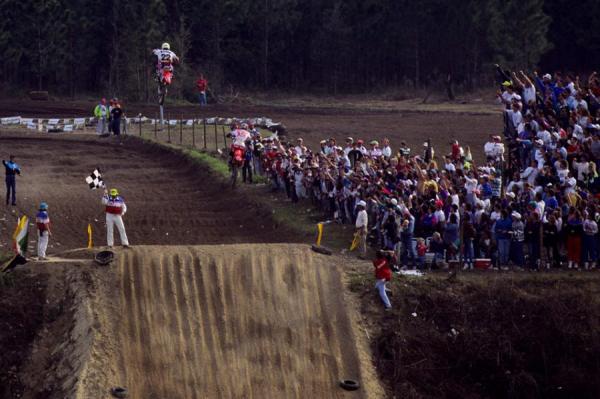 5. 1993, Gatorback: Just a superb race, Team Honda’s new superstar Jeremy McGrath had a 125cc battle on his hands for the entire race from veteran (and privateer) Erik Kehoe. Heading to the finish, Kehoe pinned his Honda of Troy bike and leaped some 100-plus feet out of the famous gator pit, passing MC in mid air to take the last moto win of his career. [Check out full results from this race HERE]

4. 1991, Hangtown: Okay, it wasn't the series opener -- that was Gainesville -- but this was a crazy race that set the tone for a decade to come (and, back then, Gainesville took place two months before any other outdoor round, so Hangtown usually felt like the “real” opener). A massive rainstorm caused the Hangtown track to flood so badly that the promoters were forced to go with a single moto, and the winners were both privateers (and legends-to-be) in Doug Henry and John Dowd! Jean-Michel Bayle finished second in the race, but he picked up 22 points on his primary competition as guys like Jeff Stanton, Jeff Ward and Damon Bradshaw all drowned their bikes out in the mud. [Check out full results from this race HERE] 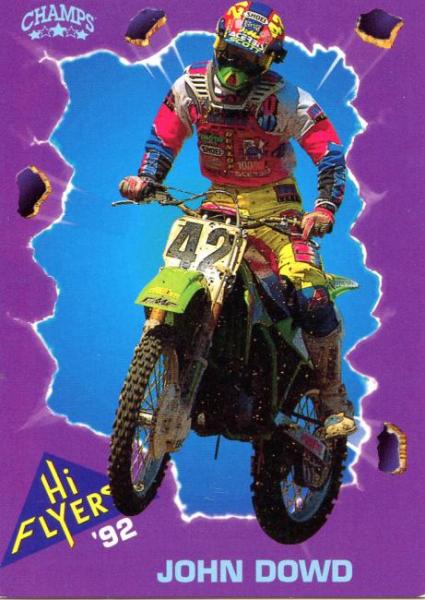 3. 2005, Hangtown: Mike Alessi, starting his first full pro MX season, found himself holding a massive lead in the second moto of the 125 class. He appeared to have the moto win on lockdown until Grant Langston, who had crashed earlier in the moto, started putting on a very impressive charge. The crowd took notice, and when the white flag came out, every eye was fixed on Langston to see if he would be able to close what was still a sizable gap with just one lap remaining. The drama culminated when Langston got close enough to put a move on Alessi in the final turn. It was a frenzied attempt, and it left both riders on the ground roughly twenty feet from the checkers. The crowd went crazy when Langston was able to remount and cross the line in first (with an ankle injury that would ultimately ruin his season), while Alessi tried desperately to refire his bike. After many unsuccessful attempts, Alessi attempted to push his bike over the finish line jump, but he was so tired that he collapsed mere feet from the line and his bike tumbled down the side of the jump. Unaware that he hadn’t actually crossed the line yet, Alessi lost several more positions as he stayed on the ground, utterly exhausted. After what seemed like a sure victory, Alessi finally finished the race in fifteenth. Click here for a clip of the crash. [Check out full results from this race HERE]

2. 1976, Hangtown: Hurricane sighting! Young Yamaha rider Bob Hannah had won during the Florida winter series events, but no one was sure what to expect in his first foray as a full factory rider on the national scene. He promptly won the Hangtown 125 National opener—and the legend was born. [Check out full results from this race HERE] 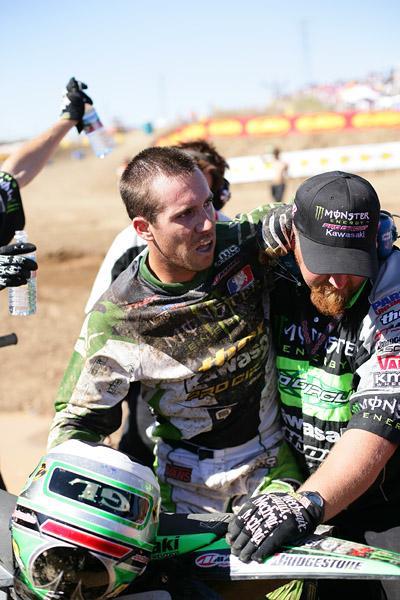 1. 1989, Gatorback: Perhaps never has the guard changed so swiftly. In a single day, the sport changed entirely, first, as the dominant Rick Johnson was landed on in practice by privateer Denny Storbeck. RJ broke his wrist and never fully recovered, so his dominant run was cut short just as he was at the peak of his powers. Later that day, Frenchman Jean-Michael Bayle, sporting “star buster” on the back of his pants, scored an upset overall win in the 250 class over Jeff Stanton and Jeff Ward. Until that day, foreign riders were not taken seriously in the U.S., but JMB’s triumph paved the way for every non-U.S. born star we see racing here today. [Check out full results from this race HERE]