Santa Barbara, CA – Rock River Yamaha & Moto Star team rider Amanda Maheu has recently been invited to compete in X Games Los Angeles 2012. Nearing the midpoint of the summer, the newly turned pro, Amanda, will compete in Moto X Racing against other Women riders. Some of these riders include Ashley Fiolek, Vicki Golden and Sara Price. At the young age of 16, Amanda Maheu will be one of the youngest athletes in X Games Women’s history to compete in her class.

Amanda Maheu has just recently turned pro and will compete alongside her Rock River teammates such as Ben LaMay and Jarred Browne at this summer’s outdoor Nationals aboard a YZ250F. She has worked hard to be under the Rock River Powersports tent this year and that work has paid off. Looking ahead to Late June and Early July she will be able to compete against other top WMX athletes in Los Angeles as she attends X Games. 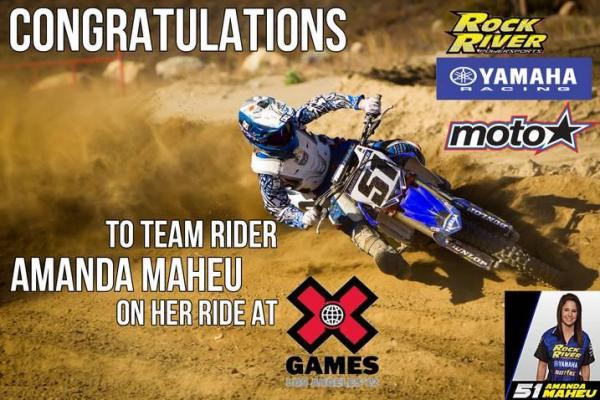 Congratulations to Amanda for her accomplishment and look for official dates of competition to be announced soon on Xgames.com. X Games Los Angeles will be held June 28th – July 1st. Tickets for the event go on presale May 21st and if you would like to purchase them to watch Amanda and other athletes alike, please visitticketmaster.com/xgames.

Visit us online where we have launched some fun and free social media campaigns!