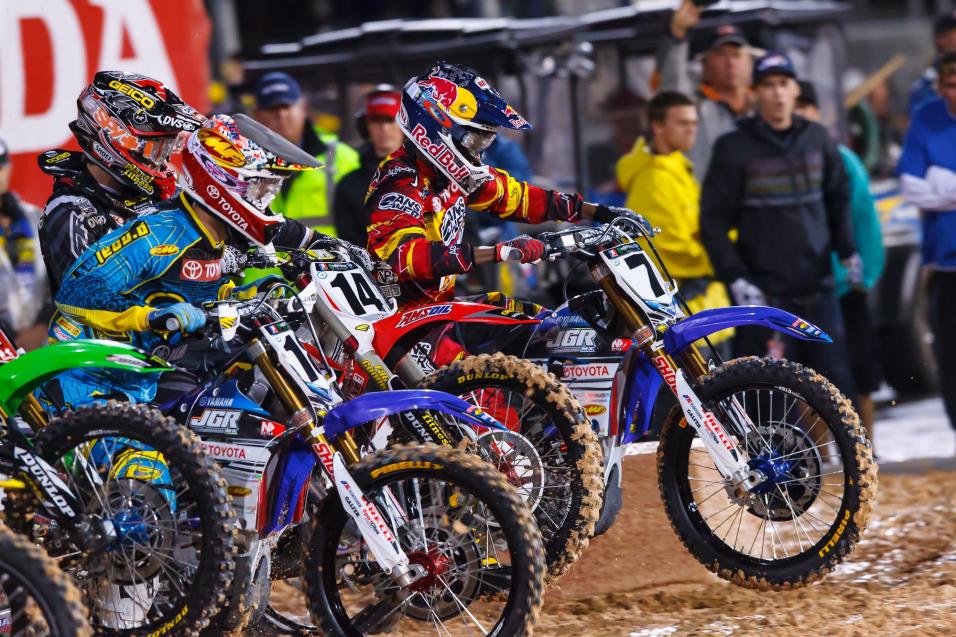 Advertisement | Advertise with Us
Daytona International Speedway Daytona, FL Daytona Monster Energy AMA Supercross Championship
Somewhere last night Coach Joe Gibbs must have been smiling. After what’s been an up-and-down start to the JGR/James Stewart era, his son Coy’s Supercross program racked up its first-ever 1-2 at Daytona International Speedway in a muddy, nasty 16-lap main event. Stewart and teammate Davi Millsaps, both Florida natives, held the top two spots throughout the race, as only the veteran Kevin Windham—the crowd’s sentimental favorite, especially in light (or splash) of his muddy upset here in 2008—was close to the JGR Yamahas. And given the Gibbs family’s familiarity with the World’s Center of Racing, this SX romp could not have come in a better place.

The man in the driver’s seat for this championship—Monster Energy Kawasaki’s Ryan Villopoto—had a much different evening. The points leader went down on the first lap in a slow-motion crash that saw the defending series champ somehow ride sidesaddle over a couple of muddy jumps in a bid to save it. The crash dashed his shot at three wins in a row here at Daytona, but Villopoto still managed a solid fifth with a strong comeback from last. And given the news of Ryan Dungey’s inability to race following his surgery to plate a broken clavicle, RV might have been excused for showing a lesser effort—his advantage in the points suddenly tripled as soon as Dungey joined Chad Reed on that couch—but that’s just not the way Villopoto rolls. 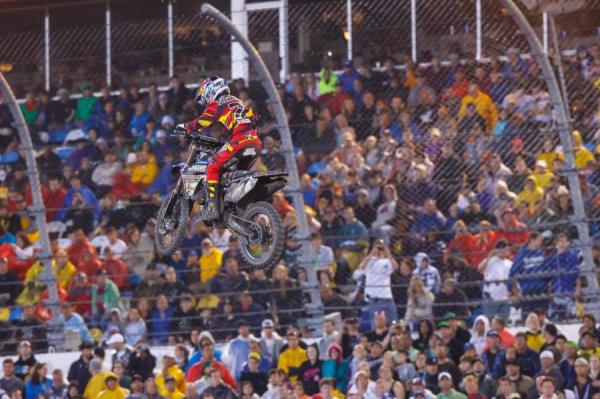 Rain didn't stop the fans from cheering Stewart to a win.
Cudby photo

But it’s not too late for Stewart to make something happen. He was looking for some kind of spark, even showing up for practice with his old #259 on the plates of his Yamaha (and his old rival Ricky Carmichael out there with him on the track in a cameo appearance). With the win in Daytona, maybe James can now build some momentum and get on a roll of his own. His team rig was certainly in a good mood last night following their one-two results. However, it would be unlike Villopoto to make many more mistakes like he did last night, and James will need a lot of help to get that points lead cut down to have a shot at this title.

That’s the big picture. In the immediate future is the Indianapolis Supercross, and a promising match-up between a reinvigorated James Stewart and the man with the big red #1 plate, and Bubba really has nothing to lose.